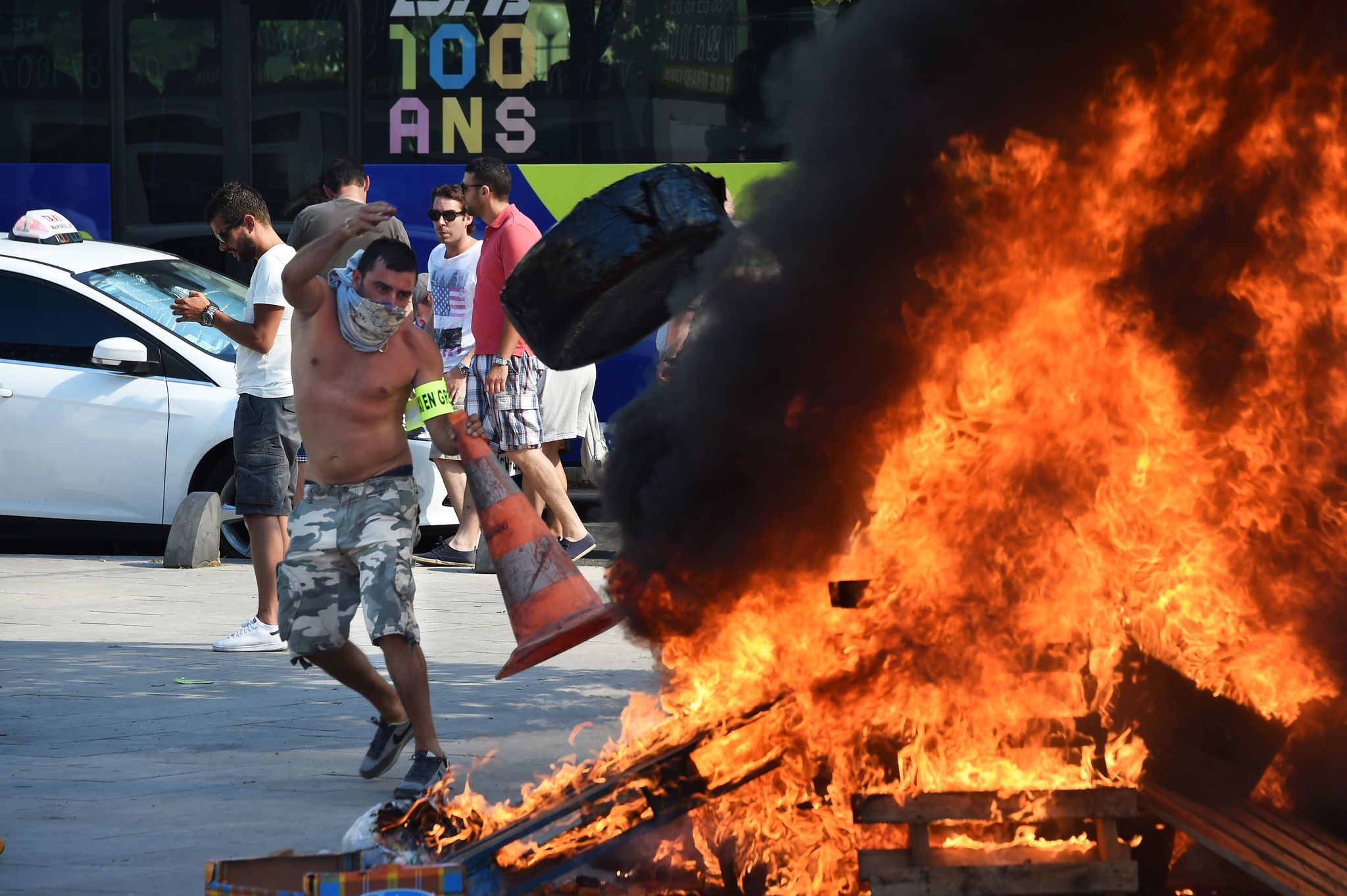 French taxi drivers protest in the southern city of Marseille as they demonstrate against Uber, which is facing fierce opposition from traditional cabs.

Hundreds of French taxi drivers took to the streets Thursday in sometimes violent protest against Uber, blocking access to major airports and train stations, and attacking vehicles suspected of working for the popular car service, which they accuse of stealing their livelihoods. 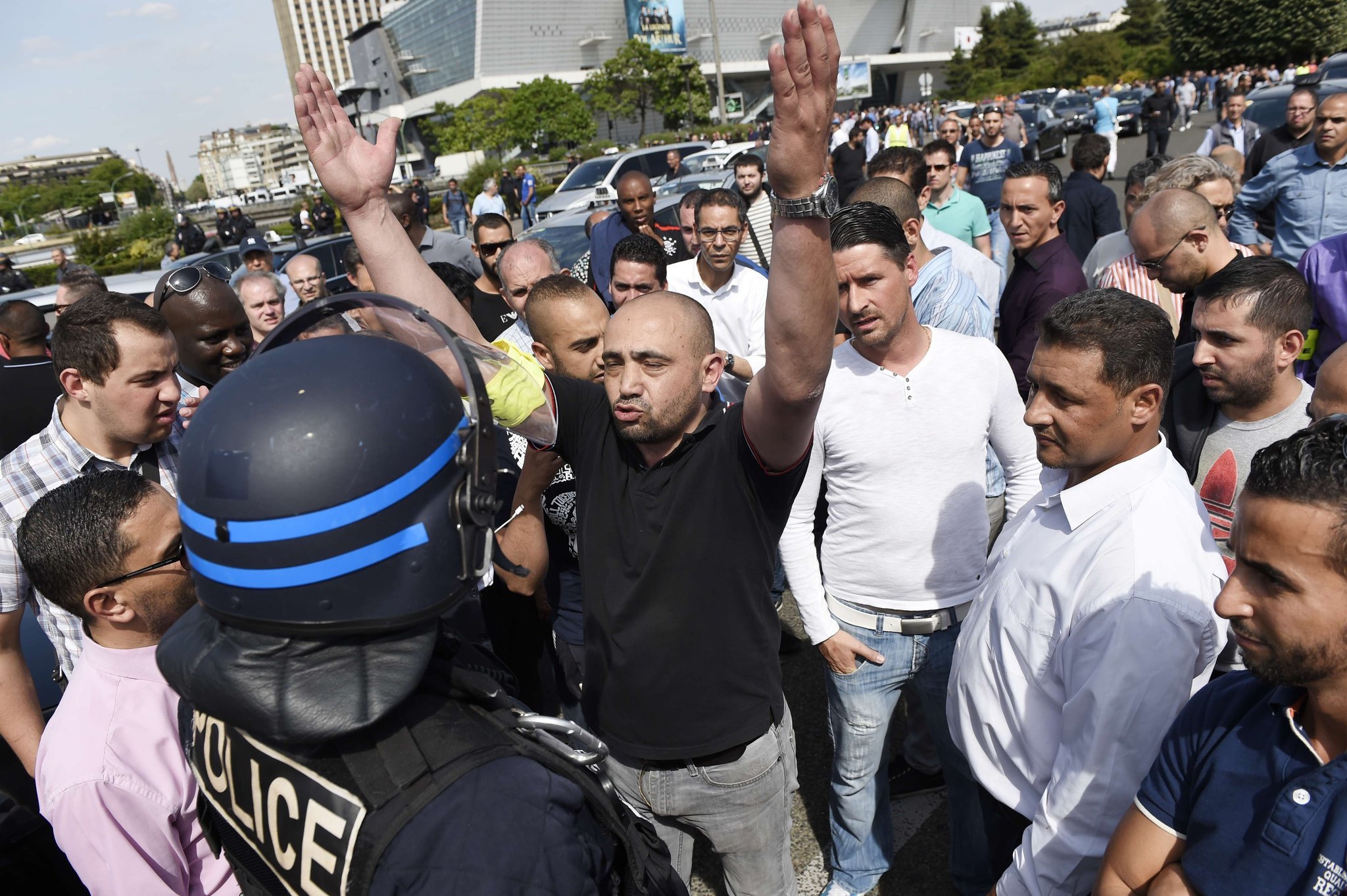 A taxi driver argues with a riot police officer standing guard during a demonstration at the Porte Maillot traffic roundabout on June 25 in Paris.

The violence follows weeks of escalating tension over the San Francisco-based firm's decision to continue offering its low-cost UberPop service despite an October law that bars companies from connecting passengers with unregistered drivers.

French taxi unions accuse UberPop of ignoring repeated court rulings and complain that police have turned a blind eye to the operation. The country's interior minister, Bernard Cazeneuve, said Thursday that the service must be shut down, citing the “serious public order disturbances and development of this illegal activity.”

The company has appealed the judgments and says it is waiting for a final decision from France's constitutional court, which began deliberating on the matter Tuesday.

Thomas Meister, an Uber spokesman, accused Cazeneuve of disregarding the legal process. “The way things work in a state of law is that it's for the justice to judge whether something is illegal or not,” Meister told reporters.

Uber has faced repeated pushback from taxi operators and regulators as it has expanded into more than 300 cities across six continents. In an attempt to win over skeptical local authorities, the company has touted its potential to create jobs, reduce congestion and boost tax revenue. 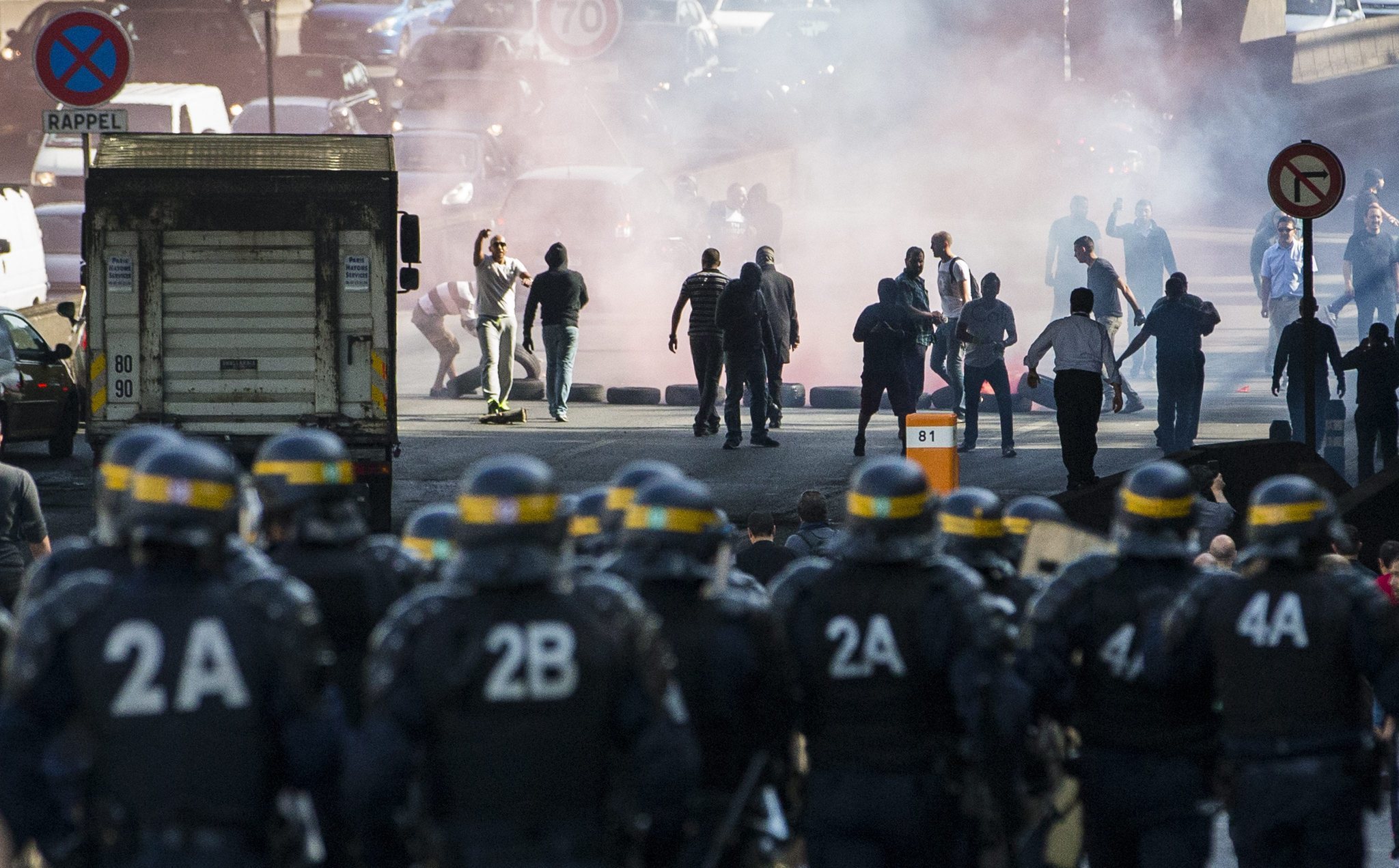 A taxi driver holds a placard which reads, "Stop Uber, stop listening," during a protest in Paris.

Chief Executive Travis Kalanick made the case in January that many taxis in Europe operate “off-grid” and that Uber could be a way to bring them into compliance with local safety regulations and tax obligations.

The argument, however, does not appear to have swayed many European governments or taxi companies. More than a dozen lawsuits have been filed in recent months in countries across the continent, where some analysts say the company is in danger of being shut down or becoming so entangled in legislation as to be neutered.

In France, the battle is seen as the epitome of the culture clash between American free-market values and French economic protectionism.

“They're very protectionist of their culture, their way of life, their way of doing things,” said Hugh Tallents, a partner at the New York management consulting firm Cg42. “It's not unheard of for unions to strike on a moment's notice or to retaliate against disruptive market forces.” 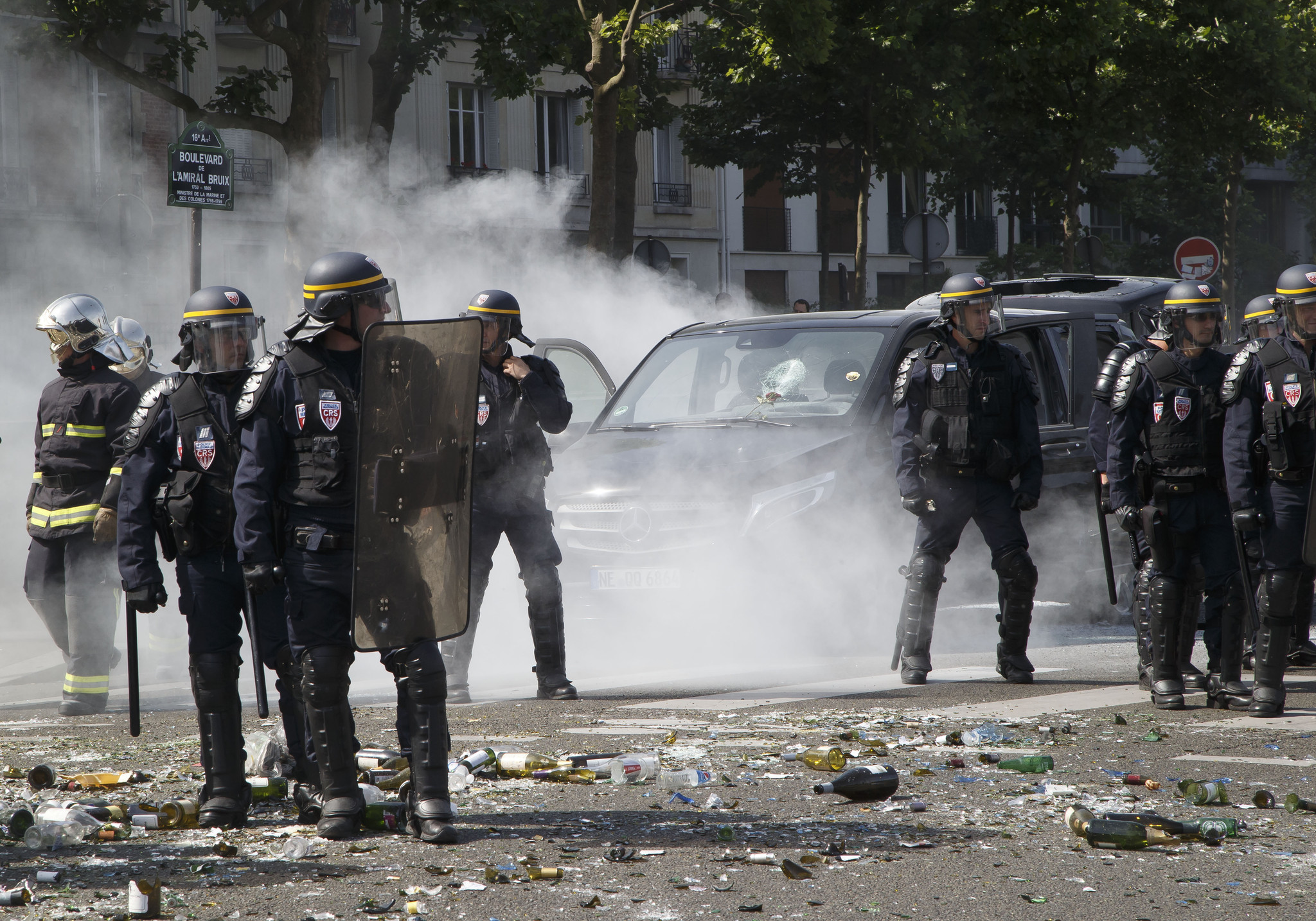 Police officers stand next to a burned car during a taxi drivers demonstration in Paris. French taxis are on strike around the country, after weeks of rising tensions over Uber's ride-share service.

Tallents suggested that Uber might have to incorporate a little more cultural sensitivity into its operating model as it continues to expand.

“Uber's strategy is one where they go in and take a very active approach.... They know their window for shoring up share and gaining riders and drivers is short because there are a lot of hungry competitors out there,” he said. “People will be looking at France as the poster child of how things can go wrong. I don't think this will necessarily derail Uber. But I think it could give them pause.”

French taxi drivers complain that services such as Uber have an unfair advantage because their drivers don't pay for licenses that can cost up to $270,000. Some don't pay taxes and social charges, either, according to French officials. Cazeneuve berated Uber as a company that “with arrogance applies none of the rules of law of the republic.”

“We are faced with permanent provocation,” Serge Metz, the head of the taxi company G7, told French television. “There can be only one response: a firm and systematic seizure of offending vehicles.” 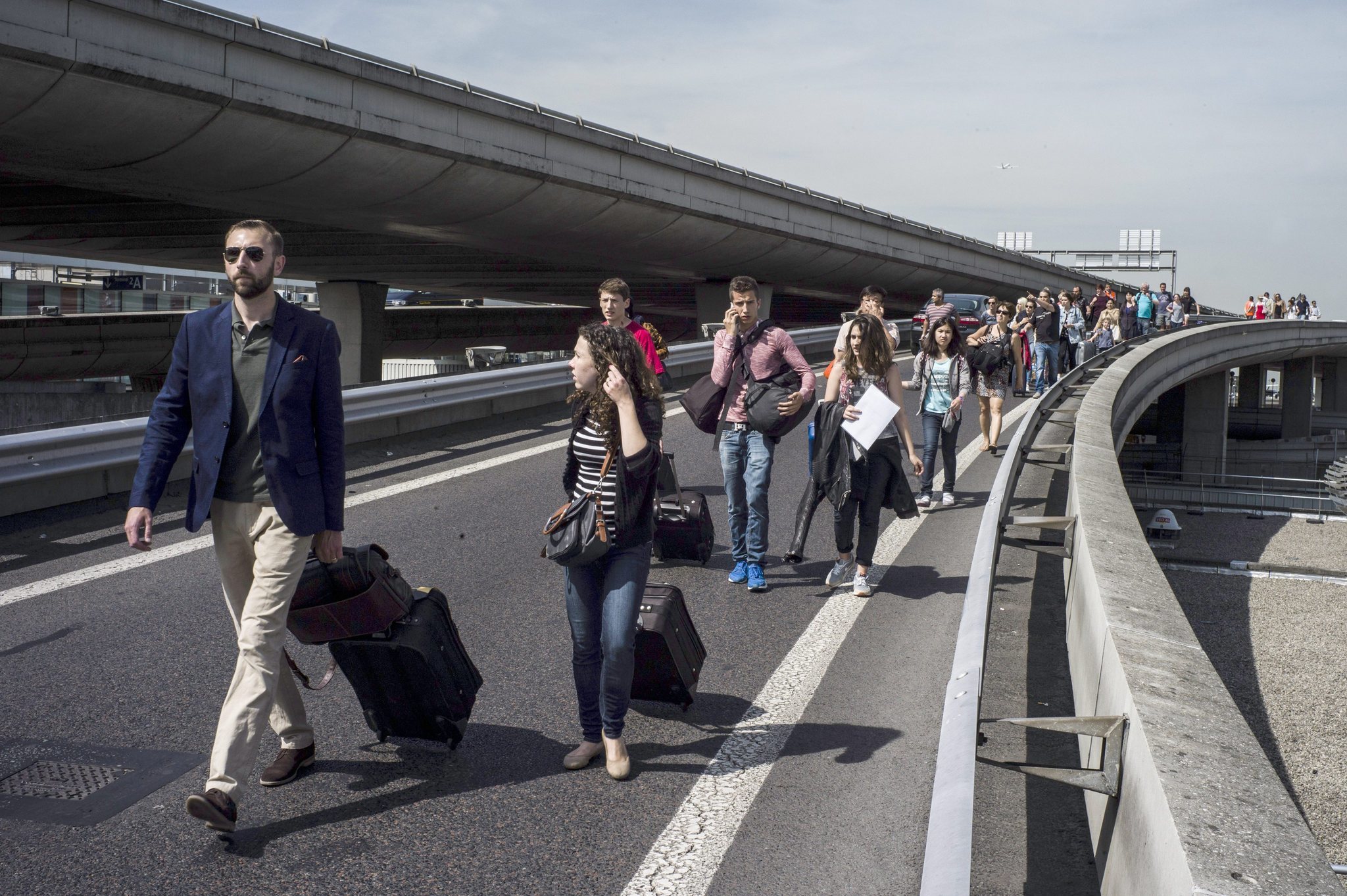 Travelers who were caught in the gridlock caused by anti-Uber protests walk along a freeway toward the Charles de Gaulle airport near Paris on June 25.

Uber counters that the taxi drivers are an outdated lobby fixed on defending their monopoly at the expense of customer needs. The company estimates that its smartphone app has about 400,000 French users a month.

Visitors to the French capital can testify to the frequent difficulty of finding a cab in Paris. French taxi drivers have also faced complaints of being resistant to change, including the use of credit cards and GPS technology.

An estimated 2,800 taxi drivers took part in Thursday's strike, setting up about 30 blockades across France, including on roads leading to Paris' Charles de Gaulle and Orly airports. Lines of travelers could be seen trudging along busy highways, dragging their luggage behind them, to catch flights and trains. Riot police fired tear gas to clear protesting drivers from the ring road around Paris.

There were reports in the French media of gangs of taxi drivers hunting down drivers they suspected of operating for Uber at the two airports and of attacks on some private-hire cars and even licensed taxis that were not taking part in the protests.

Among those caught up in the violence was actress-musician Courtney Love, whose ride was ambushed by anti-Uber protesters.

“They're beating the cars with metal bats. This is France?? I'm safer in Baghdad,” she tweeted.

In another tweet, Love lambasted the French president: “Francois Hollande where are the ... police??? is it legal for your people to attack visitors?”

The singer was rescued by two men on a motorcycle but said she had been “scared out of her wits.”

In the eastern city of Strasbourg, there were reports of taxi drivers posing as Uber customers to lure drivers to isolated spots where they and their vehicles were attacked.

Meister, the Uber spokesman, described the attacks as “totally scandalous” and the “actions of yobs.”

“It's a small minority of taxi drivers who are not doing their profession any favors,” he said.

It is not unusual for French industrial action to turn violent. This week, striking workers at the MyFerryLink transportation company blocked access to the Channel Tunnel. Eurostar trains were canceled for the afternoon after the rail company said strikers had damaged sections of the track. Riot police were eventually called in to drag the protesters away as they sang the French national anthem, “La Marseillaise.”

In 1999, a French sheep farmer became a national hero when he led a group to “dismantle” a McDonald's restaurant that was being built in the south of France. Jose Bove was protesting against restrictions imposed by the Clinton administration on imported Roquefort cheese.

Andrea Chang is a wealth reporter for the Los Angeles Times. She was previously a Column One editor, the deputy Food editor and an assistant Business editor, and has covered beats including technology and retail. Chang joined the paper in 2007 after graduating from the Medill School of Journalism at Northwestern University. She grew up in Cupertino, Calif.