High-profile hostages who died while in Islamic State custody

The extremist group known as Islamic State has killed a number of people in the last few years. Here is a look at some of the people who died while in Islamic State custody. 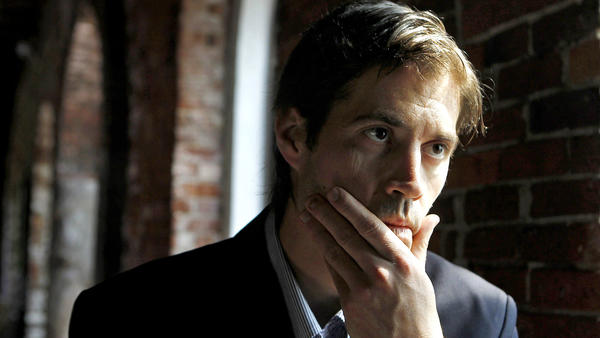 Circumstances: Foley was kidnapped in Syria in 2012 while working as a freelance journalist for the Boston-based site GlobalPost. Shortly after his disappearance in 2012, his family started a vocal campaign to find him and return him home. A video posted online in August showed Foley kneeling in the desert in an orange shirt and pants as a masked man in black stood beside him. After the executioner beheads Foley, a second man shown is identified as missing American journalist Steven Sotloff. 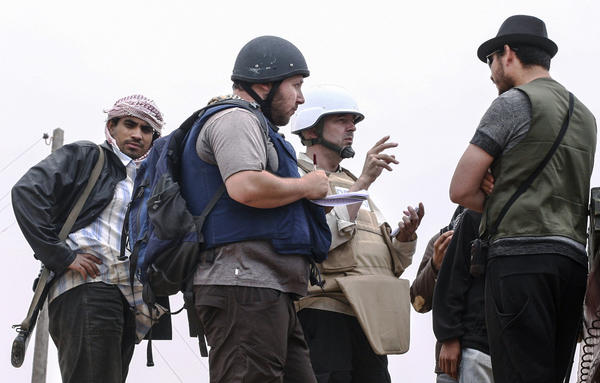 Circumstances: Sotloff, a 31-year-old freelance journalist who wrote for outlets including Time magazine and Foreign Policy, was kidnapped shortly after he crossed into Syria in August 2013. The Sunni militant group released a video on Sept. 2 that showed Sotloff shortly before and after his death. In the video, a militant said the killing was retaliation for U.S. airstrikes President Obama had ordered on Islamic State targets in northern Iraq. 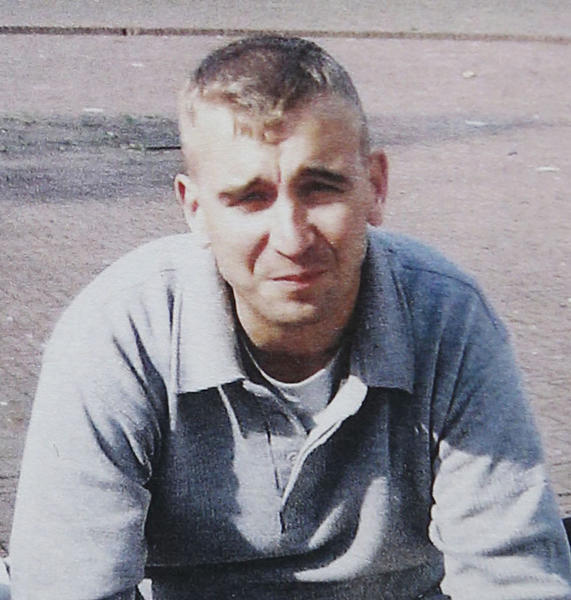 A photo from the program handed out at an October memorial service for David Haines, a British aid worker. (Danny Lawson/PA Wire)

Circumstances: Haines was a British aid worker who was kidnapped near the Turkish border in March 2013. At the time of his capture, Haines was working for a French humanitarian aid agency, helping those affected by the Syrian civil war. A video released Sept. 13 showed the death of Haines, 44, at the hands of Islamic State militants. In the video, the executioner places the blame for Haines’ death on British Prime Minister David Cameron and his alliance with America against the group. 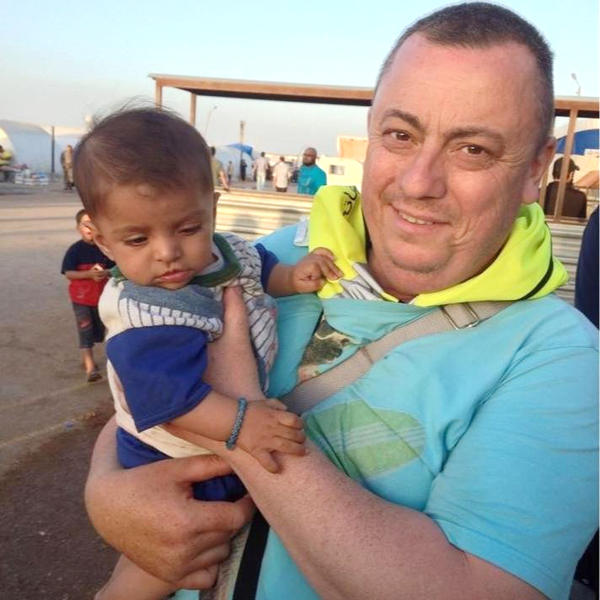 Circumstances: Henning, 47, traveled to Syria to assist with humanitarian relief work, and was kidnapped in Ad Dana shortly after crossing the border with an aid convoy in late December. Henning was a married father of two who was known to his friends as “Gadget” because of his technical savvy. A video released in October showed his death and a militant threatening Peter Kassig, another hostage. Peter Kassig stands in front of a truck filled with supplies for Syrian refugees in an undated photo provided by his family. (AP Photo/Courtesy Kassig Family, File)

Circumstances: Kassig was an Indiana native and a former U.S. Army Ranger who was detained on Oct. 1, 2013, near the eastern Syrian city of Dair Alzour. Kassig founded an aid organization, Special Emergency Response and Assistance, that helped deliver medical supplies, food and other aid to rebel-held areas of Syria. A video released in November didn’t show Kassig alive or during his execution, unlike previous videos released by the group. Early in the video, more than a dozen Islamic State fighters are shown beheading Syrian government soldiers. A black-clad militant then stands over a severed head and said Kassig had been beheaded. A Jordanian woman lights a candle by a picture of two slain Japanese hostages Haruna Yukawa, right and Kenji Goto during a vigil in support of Japan, in front of the Japanese embassy, in Amman, Jordan, on Feb. 2. (Nasser Nasser/Associated Press)

Circumstances: Yukawa was an aspiring military contractor who was taken hostage last year during a trip to rebel-held parts of northern Syria. He journeyed to Syria after a period of personal and financial crisis. The militant group demanded that Japan give them $200 million for the release of Yukawa and for another Japanese captive, Kenji Goto. A video distributed in January showed Goto saying that Yukawa was dead. Goto outlined a new militant demand for his release. 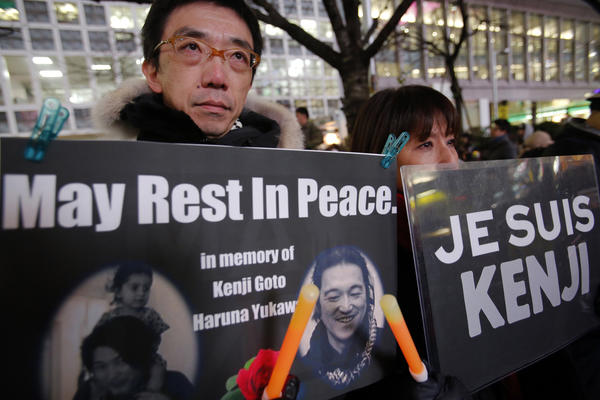 Circumstances: Goto may have entered Syria in part to find Yukawa who had been detained there in August. Goto, an experienced war correspondent and father of two young daughters, was himself taken hostage. Islamic State militants released a video Jan. 31, showing Goto wearing an orange jumpsuit and kneeling alongside his executioner. The executioner addresses Japan’s Prime Minister Abe and says the death is coming as a result of his decision to “take part in an unwinnable war.” 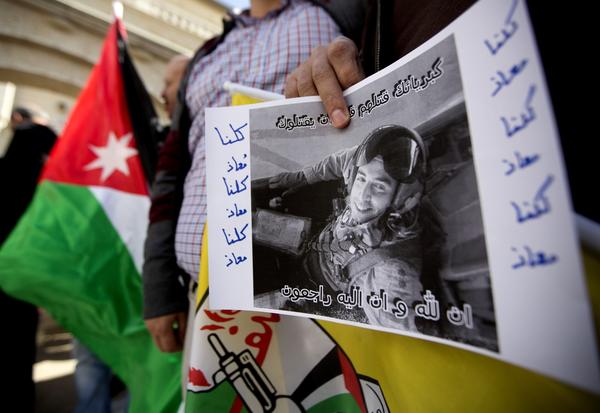 A Palestinian holds a poster with a picture of a slain Jordanian pilot, Lt. Moaz Kasasbeh, during a protest in front of the Jordanian Embassy in the West Bank City of Ramallah. (Majdi Mohammed / Associated Press)

Circumstances: Kasasbeh, 26, was a Jordanian pilot who was captured in December when his F-16 fighter jet crashed in northern Syria. The pilot was on a mission as part of the U.S.-led bombing campaign against the Islamic State. A video released Feb. 3 showed the pilot being burned alive in a metal cage, which sparked global outrage. The Jordanian government vowed prompt retaliation against the killers. Circumstances: Mueller was abducted in the Syrian city of Aleppo in August 2013, as she left a hospital operated by Doctors Without Borders. Islamic State released a video claiming that Mueller, 26, was killed in an air attack by coalition forces against the militants in Syria. Mueller’s family confirmed she was dead, but didn’t confirm she was killed in a bombing, as the group asserted. An image from a video released Feb. 15 shows Islamic militants leading Egyptian Christian hostages along a beach before they are allegedly beheaded in the Libyan capital of Tripoli. (AFP/Getty Images)

Circumstances: A video surfaced on Feb. 15 that appeared to show the beheadings of a group of Egyptian Christians that were taken by Islamic extremists in Libya in the last two months. The Egyptians had been captured in two incidents in the central coastal city of Surt, according to their families and the government. In the video, shot on a beach, the prisoners are marched into place by a line of captors holding knives. They are forced to lie face down in the sand before they were killed.

11:30 a.m. This article has been updated with details about the deaths of Coptic Christians in Egypt.

This article was originally published at 10 a.m.