Fish stocks are being depleted, and some desperate Filipinos are using cyanide and dynamite on the fish. A nonprofit is trying to protect nature and ease poverty by limiting family size. 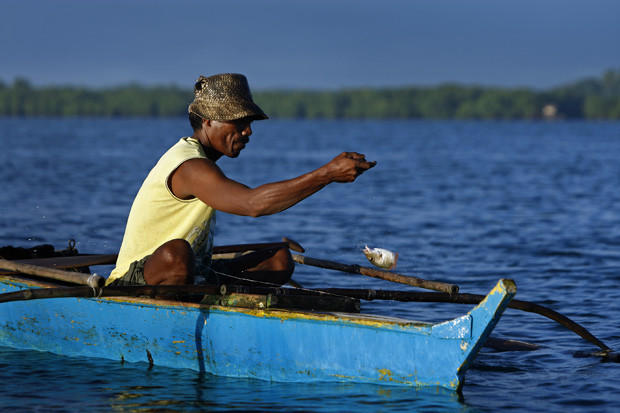 Generio Apolona lands a small fish - though it was one of the biggest of the day - using a hand line. As he struggled to collect enough food for his large family, the explosion of dynamite was audible nearby - the sound of desperation among fellow fishermen. ( Rick Loomis / Los Angeles Times )

He hooked a fish within minutes, just as the sun peeked above the horizon. It was less than 2 inches long, smaller than most fish used for bait.

A deep boom sounded from the distance. Apolona looked up, squinting in the direction of the dynamite fishermen. Then he went back to hauling in his meager catch, which barely covered the bottom of his bucket.

It was far too little to feed his seven children and his wife, Lydia, who was pregnant again. She sold the fish to buy rice the children could eat.

Remote fishing villages have some of the highest birthrates in the Philippine archipelago. In their struggle to feed growing families, some islanders resort to using dynamite or cyanide to make fish float to the surface for easy pickings.

The short-term gain comes at a cost: Destruction of the coral reefs and mangrove forests needed to sustain future generations of fish.

The practices are banned and the government has created marine reserves to give fish stocks a chance to rebound in the waters off the island of Bohol, 450 miles south of Manila. Yet enforcement is spotty.

Fishermen like Apolona, though they don’t use dynamite, sometimes drift into protected areas.

Every day, Apolona competes with others from his village for the few remaining reef fish within paddling distance. Two decades ago, the village consisted of five families living in bamboo huts on stilts. Now there are 32 families with six to 10 children each. The mangrove forest along the shoreline is clogged with fishing boats.

Dr. Joan Castro is trying a broader approach. With support from the U.S. Agency for International Development and other donors, she and her team promote family planning in more than 180 isolated villages, aiming to address concerns about population growth, health and the environment in a single program.

Three-fourths of the residents of the villages report that their families sometimes go hungry.

“We help people see that if you manage your family, you can manage your food supply,” said Castro, a Manila physician who is executive vice president of the nonprofit Path Foundation Philippines.

The program makes birth control pills and condoms available through convenience stores, because pharmacies and clinics are scarce. About 15,000 women are participating. Their birthrates are significantly lower than their neighbors’ and some are better off economically, a study found.

On a small farm on Bohol, Maridith Cañete, 29, said she’s grateful to be served by the program. With only two children, she has an easier life than her neighbor with seven, she said. She showed off a solidly built home with a closet stacked with bags of rice.

She has big plans for her son and daughter, both preschoolers, so they don’t have to rely on what they can catch or grow.

“I want them to go to college,” she said.

Others, like the Apolonas, have been reluctant to break with tradition. Everyone in the family is skinny, even the pregnant wife. The kids are small for their age, as are many of the barefoot children in the village.

Mercy Butawan, a local midwife who helps with Castro’s program, asked the couple why they don’t use contraceptives. Lydia shrugged and said her husband objects.

Generio said he has heard talk in the village about side effects from birth control. He smiles, but his eyes look terrified.

“If Lydia were to get sick, especially while the children are still young … I don’t know what I would do.”