Without bees, there would be no California almonds.

But the Central Valley's love affair with almonds and other orchard crops has left the area with a steep imbalance between wild bee populations and the need for the pollination services they provide, according to a study published online Monday in the journal Proceedings of the National Academy of Sciences.

The study comes amid alarm over the precipitous decline in the population of commercial honey bees that are brought in to pollinate crops, at great expense to growers.

Wild bees, it turns out, can make domesticated honey bees much more efficient, and that adds about $3 billion to the country's agricultural production, studies have shown. 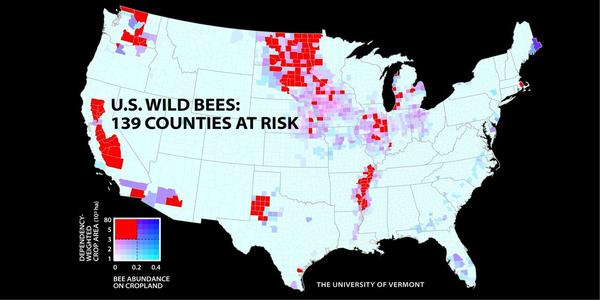 The red zone: Where supply and demand for wild bees are mismatched. (Leif Richardson / University of Vermont)

The map above shows where the gap between abundance of wild bees and demand for pollination is steepest. Not surprisingly, the biggest disparities, shown in red, occur in areas where extensive tracts are given over to single-crop cultivation. Those include 139 counties, mainly in the Upper Great Plains, areas flanking the lower Mississippi River, and swaths of Texas, California, Arizona and Washington.

“I think the reason why the Central Valley lights up so much is largely almonds," said study co-author Taylor Ricketts, a landscape ecologist at the University of Vermont. "It's a hugely valuable crop that’s been expanding like crazy, and it’s entirely dependent on pollinators.”

Crops such as tomatoes and pitted fruits contribute to the state's supply-demand gap, "but the one that is making the map so bright red is almond,” Ricketts said.

California growers added about 140,000 acres of nut-bearing almond trees from 2008 to 2013, the time period of the study, according to U.S. Department of Agriculture data. The $3-billion almond industry spends $239 million annually to rent more than 1 million bee hives.

The wild bee population study, the first of its kind at a national scale, comes in response to a White House effort last year aimed at addressing honey bee colony collapses. It called for a national assessment of wild honey bee populations, and the creation of 7 million additional acres of habitat for wild pollinators.

Knowing where pollinators are available and how changes in landscape can affect their abundance is central to any effort to add more habitat, Ricketts said.

So the researchers gathered estimates of bee abundance from top entomologists, then created a model that predicts how many wild bees live and work on different types of land in the lower 48 states. Those modeled results were spot-checked against data from smaller-scale studies.

Using a well-known database of land cover, the researchers calculated the change in bee abundance from 2008 to 2013. Then, they mapped the relationship between relative abundance and the need for pollination, based on the types of crops cultivated. That reduced the problem to one of supply and demand.

Over those five years, relative abundance of wild bees declined in 23% of the land area in the contiguous states, the study found.

Where the wild things aren't: 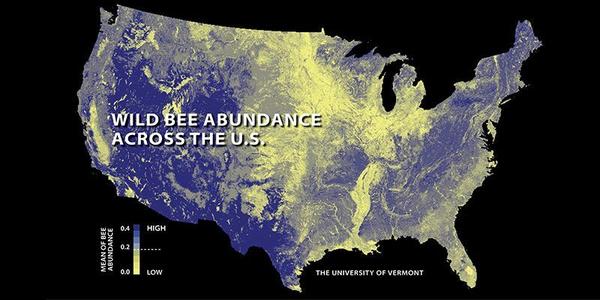 The resulting map could be a warning to growers that they are too dependent on commercial honey bees and should “diversify their portfolio," Ricketts said.

“It could be a glimpse of the future for a lot of crops," said Ricketts. "It’s such an extreme and early case, where they’ve so intensified that there’s no habitat left for native bees. "

California's Central Valley, the Imperial Valley and parts of Washington stand out in the West, largely because growers there cultivate crops that depend heavily on pollination: apples, peaches, pears, blueberries, cherries, watermelon and honeydew melons, almonds and tomatoes.

"We are a state with a huge dependence on pollination. We have very intensive agriculture, which has challenged our wild bee pollination a lot," said UC Davis entomologist Neal Williams, one of the authors of the study.

Increased gaps elsewhere in the nation came from a greater rise in acreage dedicated to crops that are only moderately dependent on pollination, such as soybeans, cotton, canola and sunflower, the researchers said.

Some almond growers have begun to take notice, adding wild bees to their pollination plan and restoring native vegetation. Wonderful Pistachios & Almonds, formerly known as Paramount Farms, will use blue orchard bees this year during pollination season, for example.

The effort is part of a national campaign to diversify the way crops are pollinated, Williams said.