After a strategic review of the brand in the last year, during which Tesco had indicated it might limp back across the pond to lick its wounds, the largest British grocer confirmed its “exit from the United States.”

Tesco will attempt to sell Fresh & Easy and its 200 stores in California, Arizona and Nevada. The chain launched to great fanfare in November 2007 – just before the recession and sub-prime mortgage crisis swept through the U.S., causing Americans to retreat to the security of familiar brands.

Even without the economic turmoil, the gamble would have been a dangerous one. The U.S. grocery category is saturated with longstanding, homegrown names such as Wal-Mart, Costco, Whole Foods and Trader Joe’s.

How much do you know about frozen food?

There was also, as Tesco Chief Executive Philip Clarke said in a statement Wednesday, the matter of “profound and rapid change in the way consumers live their lives.”

Fresh & Easy, which employs 5,000 people, failed to make any money during its run. To abandon the project, Tesco said Wednesday it will take a write-off of 1.2 billion pounds – or $1.8 billion.

The company, one of the world’s leading retailers, said it managed a 1.4% boost in revenue to roughly $98.9 billion.

Tesco said the Fresh & Easy departure underpins a “more disciplined approach to capital allocation.” The company’s priorities will focus more on building back its neglected customer base in the U.K., according to analysts. More efforts will be allocated toward Tesco properties such as the Giraffe restaurant chain, Harris +Hoole cafes and Euphorium bakeries.

“We are realistic in our approach to growth and returns,” the company said.

Analysts such as Neil Saunders of Conlumino in London said that “the inevitably painful decision to cut and run was correct.”

“The bottom line is that Tesco probably bit off more than it could chew in the U.S.,” Saunders wrote in emailed comments, even though he noted that the undertaking may have “sounded reasonable enough” on paper.

“Retail history will likely record Tesco’s American foray as something of an unfortunate misadventure,” Saunders said. 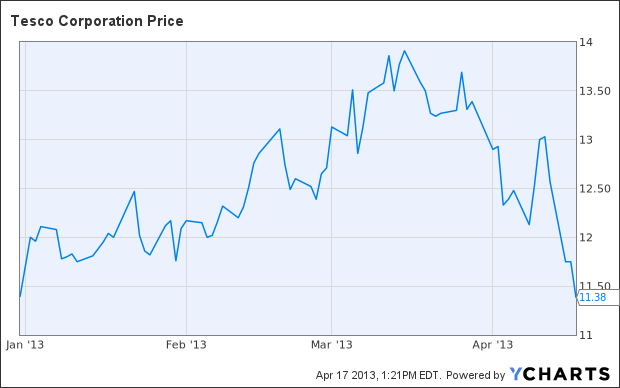 Five years in, Fresh & Easy markets are a flop