McDonald’s says rest of 2013 will be ‘challenged’

The rest of the year won’t be easy for McDonald’s Corp., according to the chief executive of the world’s largest burger chain.

Same-store sales at U.S. restaurants open more than a year were slightly negative in June, according to Don Thompson in a conference call with analysts Monday. The gauge is expected to be flat in July globally. If recent sales trends are any indication, McDonald’s results for the remaining months of 2013 “are expected to remain challenged,” he said.

Revenue rose to nearly $7.1 billion, up 2% and in line with Wall Street’s expectations.

Quiz: How well do you know fast food?

Same-store sales suffered internationally, slipping 0.1% in Europe and 0.3% in the Asia, Middle East and Africa division.

But the measure was up 1% in the U.S., as the chain hustled to adapt its famously fatty meals to changing consumer tastes. More healthful options such as Chicken McWraps and Egg White Delight sandwiches emerged during the quarter. Expanding on the popularity of morning menus, McDonald’s also said it would begin offering dinner and breakfast options from midnight until 4 a.m.

In May, McDonald’s said its same-store sales were up 2.6% -- the first positive figure in months.

This month, the fast-food behemoth has been at the center of a hullabaloo over its workers’ wages. Employee-rights advocates are infuriated over a website from McDonald’s offering budget advice to its workers. 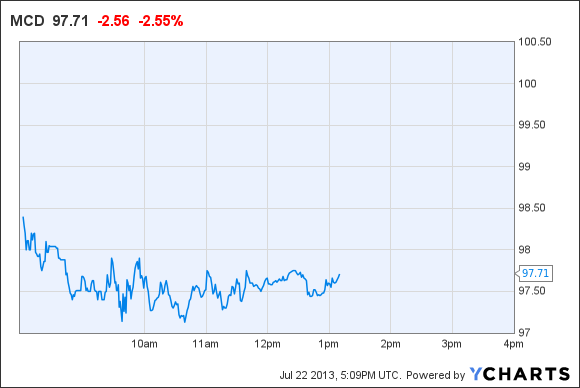