At Turner Construction, they dig reshaping the L.A. skyline 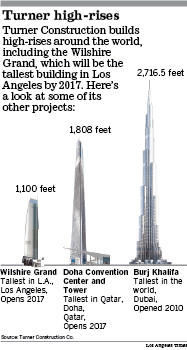 Dustin House and co-workers spent a recent morning in a massive hole in downtown Los Angeles where the 73-story Wilshire Grand Hotel will soon rise to become the tallest building west of the Mississippi River.

As one of the superintendents for the $1-billion project, House — wearing his hard hat, protective sunglasses and work boots — oversees the workers pulling the last bit of concrete from the old Wilshire Grand site, which is in the final stages of demolition this month. But later this year the big job begins as crews start pouring the concrete foundation and working their way up, floor by floor.

The hotel is being built for Korean Air and will have 900 guest rooms, double-decker elevators and a rooftop pool with ocean views. But for now the high-profile project is in the hands of Turner Construction Co., a prominent New York construction firm with an extensive track record.

Besides erecting more than a dozen high-rises and buildings in Los Angeles, Turner has built several U.S. landmarks, including the John F. Kennedy Presidential Library and Museum in Boston and the new Yankee Stadium in New York. In 2010, it completed the 2,716.5-foot-high Burj Khalifa tower in Dubai, the tallest building in the world.

Turner tops the construction industry in revenue, surpassing giants such as Bechtel Corp. and Fluor Corp. Turner’s finances are not public, but an industry magazine pegged its revenue at almost $9.1 billion last year. Turner has 5,500 employees globally, not including those of subcontractors. Locally, the firm has about 400 employees in the Southwest region.

Although House has worked for Turner as a subcontractor for only about 51/2 years, he is fully committed.

“You have to have a passion for the business,” House said. “You’re not here for a job; this is my life. I’m five years in the business and I’m helping build the tallest building west of the Mississippi. That’s huge.”

The Wilshire Grand will rise at Wilshire Boulevard and Figueroa Street, only blocks from the U.S. Bank Tower, now the tallest in the West and built in 1989. Turner built it too — along with other nearby skyscrapers, such as Gas Company Tower, Wells Fargo Center and Bank of America Plaza.

But the design and construction of skyscrapers has evolved dramatically over the last couple of decades, especially since the 9/11 terrorist attacks, said Scott Borland, a Turner construction executive who’s in charge of the Wilshire Grand project.

“It changed our world,” he said. “High-rises are built entirely different.”

Borland has been with Turner for 20 years and about 90% of his experience comes from building high-rises in New York, he said. That expertise will play a key role in Los Angeles.

Because the new hotel will become the tallest building in the second-largest city in the U.S., the building could be a new target for terrorists. With that in mind, Borland said the Wilshire Grand is designed to become “the safest building in L.A.”

Other towers throughout the city have a drywall core, but the new Wilshire Grand’s core will be made of concrete, Borland said.

Four-foot-thick concrete walls will surround a staircase at the center of the building for people to use in case of an emergency, he said.

It certainly won’t be an easy task to complete the massive Wilshire Grand project, but complicated projects have become the norm for Turner, which has been around for more than a century, he said. “We don’t get the easy jobs. What we’re good at is the difficult projects.”

But even though Turner’s projects are typically more complex than the average jobs, its mission is executed using many traditional techniques, said Michael Marchesano, the project’s general superintendent who has spent 14 years with Turner.

Each step of the plan is drawn out in great detail inside Turner’s offices at the Wedbush Center office building, directly across from the construction site. A wall inside the company’s conference room that overlooks the project is covered in “idea paint,” which essentially turns the entire wall into a dry-erase board.

“We do all kinds of different things,” Marchesano said.

Most recently, Turner decided to add sophisticated sensors to every worker’s hard hat. A computer inside the office next door will be able to track the location of every worker on the project at any given time, Marchesano said.

“If there’s an emergency, we’ll have a head count of who came off the building,” said Raul Ruiz, the project’s safety manager.

The sensor will also help the project’s managers decide where workers need to be to work most efficiently, Marchesano said.

Its unique business model has earned Turner recognition from its industry peers. Building Design+Construction — a magazine that serves contractors, property owners, architects and engineers — named Turner one of the best places to work in 2010, and last year it placed the company at the top of its annual ranking of contractors in the U.S.

The Giants 300 Report is solely based on companies’ self-reported submissions to a standardized financial survey, said Julie Higginbotham, the magazine’s senior editor.

Many of Turner’s employees have had the chance to work on major projects that have shaped downtown Los Angeles.

“I’ve been given the opportunity to build more to the L.A. skyline, which I think is amazing,” Borland said.

The glory won’t last forever, he said, “You’re as good as your last job.”