Let's get this out of the way up front: No one truly needs a selfie stick. However, they can be somewhat useful. To find the best selfie stick, we put in 20 hours of research, brought in 20 models for testing, and took dozens of selfies in various conditions, including at a frozen-over Niagara Falls. If you can't stop yourself from buying one, we found Looq Systems's Looq DG ($20) to be the best option for most people.

Why a selfie stick?

A selfie stick isn't just a silly tourist gimmick. When used the right way, it lets you take the kinds of shots that would otherwise require another person to capture. A stick can position your smartphone farther away than arm's length, avoiding the "head filling the shot" look and giving you more control over how much background is in the image. Also, an extended arm is going to be visible in a selfie, but a properly positioned selfie stick isn't.

How we picked and tested

We looked only at selfie sticks that could trigger photos remotely (via a wired connection or Bluetooth), didn't require a mobile app to function and were compatible with different sizes of iPhones and Android phones.

Because travel convenience is an important consideration, we favored sticks that shrunk down to shorter lengths for easier packing and were lighter for easier carrying. But we also valued those that were the longest when extended, as a longer stick allows for wider shots. 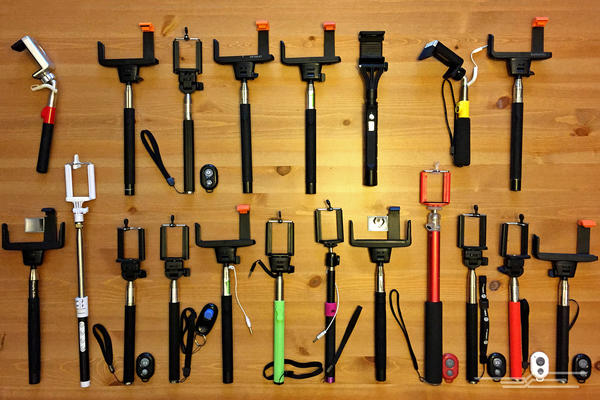 The Looq DG is the best selfie stick among all those we tested. It has a wired connection -- it plugs into your smartphone's headphone jack to trigger the shutter release. That feature is the Looq DG's biggest strength, because it eliminates the need for charging or replacing batteries and it doesn't add Bluetooth-connection complexity. Compared with other wired selfie sticks we tested, it extends to a longer length (45.5 inches), collapses to a shorter one (about 1 foot) and weighs only fractions of an ounce more than the lightest stick of the bunch.

Connecting the Looq DG to an iPhone or Android phone is as easy as it gets. A coiled cable plugs into the handset's headphone jack. A button on the stick's handle triggers the shutter in your phone's camera app as instantaneously as if you'd tapped directly on the phone's screen.

The Looq DG uses an expandable C-clamp that adjusts from 2.2 inches to about 3.5 inches across enough for an iPhone 6 Plus in a case. In testing, the Looq DG's grip was totally secure thanks to the clamp's firm tension. The cradle is easily adjusted using a plastic knob to tighten and loosen the mount. 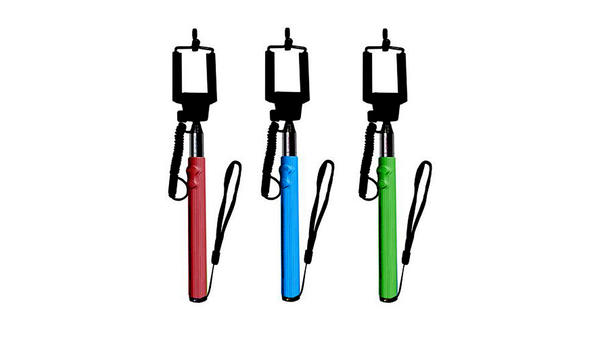 When collapsed, the Looq DG was the most compact of the wired selfie sticks in our tests.

If our top pick is sold out, or if you want to save a few dollars, pick up a wired selfie stick from either Ipow or Noot. For about $15, you get the same general functionality as you would from the Looq DG, though there are some minor differences.

The Ipow and Noot have a cradle design (commonly found in other selfie sticks) that's not quite as easy to use, and each is longer compacted, and shorter expanded, than the Looq DG. The two sticks' handles are also slightly different. The Ipow has a ribbed-rubber texture while the Noot is more of a hard foam, though neither is preferable to the other. 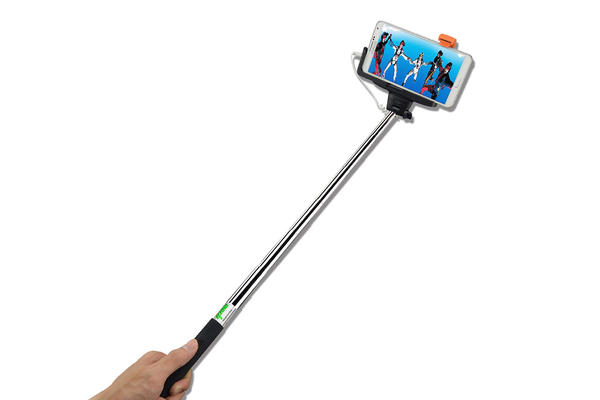 The Ipow and Noot are basically identical, so get whichever is more available to you.

For those who want a selfie stick, the best is Looq Systems's Looq DG. It provides an easy way to take better selfies or group photos without the need for batteries or inconvenient recharging; it collapses down to a short length and extends to a long length; and it's reasonably priced.

This guide may have been updated. To see the current recommendation please go to The Wirecutter.com. The Wirecutter's extensive research and testing is supported by a small commission from the purchases made by its readers.