Column: Paris Photo art fair shut down in wake of attacks. ‘We will face the barbarians,’ fair exec says

The 19th edition of Paris Photo, the prestigious photographic art fair which hosts a sister fair in Los Angeles every spring, was shut down in the wake of Friday's terror attacks. 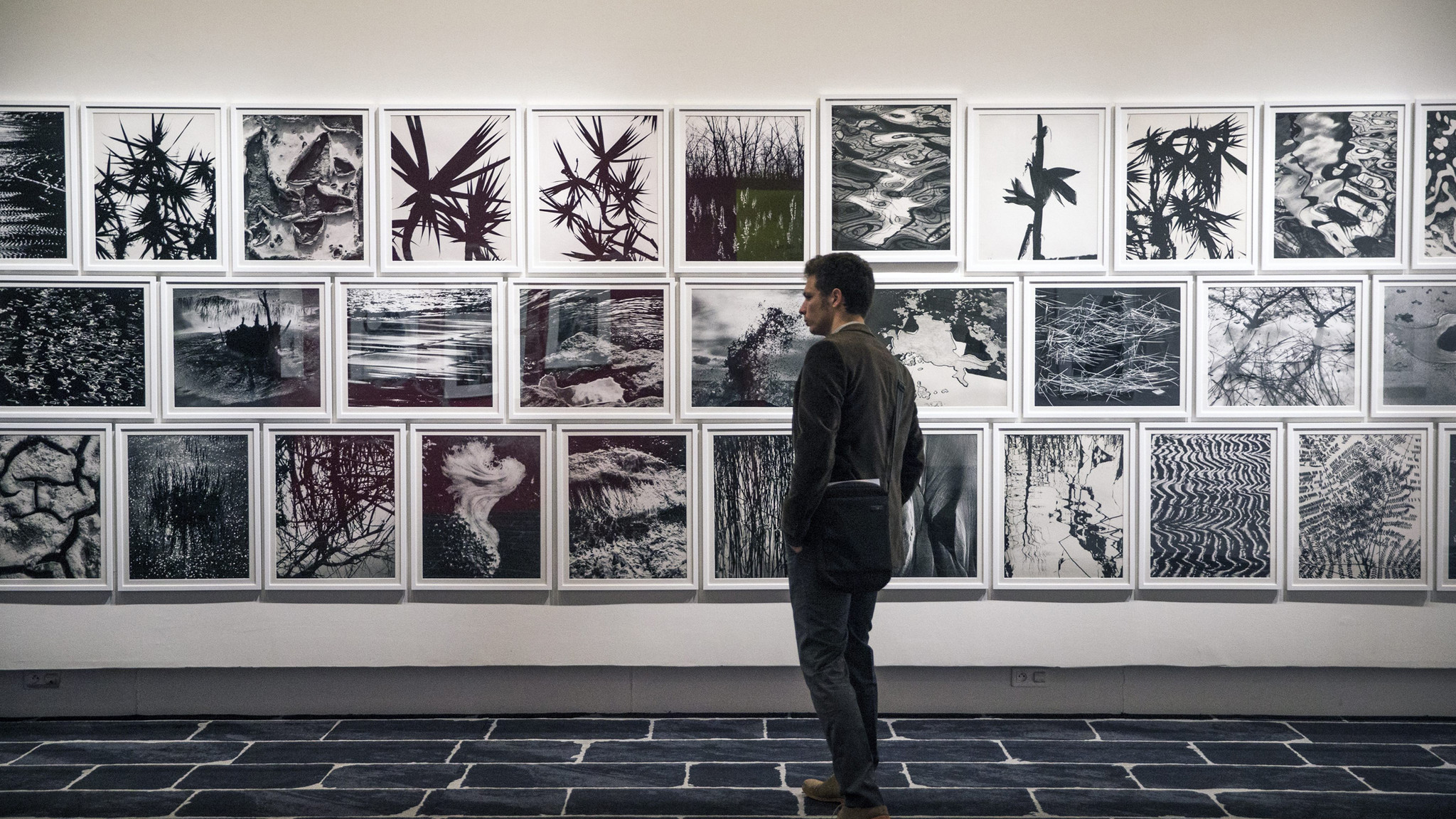 A visitor views an installation by Lucien Clergue at Paris Photo on Thursday, a day before Paris was beset by a series of coordinated acts of terror.

The prestigious photographic art fair Paris Photo, which kicked off last week at the historic Grand Palais in central Paris and which was scheduled to run through Sunday, shut down early in wake of Friday's terror attacks.

The country's Ministry of Culture and Communication closed all cultural institutions in the Paris region in wake of the deadly killings, which had left more than 120 dead and hundreds more wounded. In accordance, Reed Exhibitions, the organizers behind Paris Photo, posted a statement to their website Saturday evening, announcing the fair's official closure.

NEWSLETTER: Get the day's top headlines >>

"The Paris Photo team and all the exhibitors extend their sincere condolences and sympathy to the families of the victims of the attacks and share in the national mourning," read the statement.

The fair, which had already attracted more than 40,000 visitors from Wednesday to Friday, was closed all day Saturday, as French authorities dealt with the fallout from the attacks. That evening, Reed Exhibitions made the decision to officially shut it down.

"We are located in the Grand Palais near the Palace of the President," said Jean-Daniel Compain, a senior vice president at Reed Exhibitions, reached by telephone Sunday. "We were expecting another 20,000 people in those two days, and I cannot take the risk.

"Considering the human factor, it is very important. This is not just about business ... As all the French people and all the world, we are extremely shocked and sad. What else can I say? It's a real nightmare."

The fair, located about 3½ miles from the sites of the attacks, had already closed for the evening Friday when the violence occurred. Compain, who is French and lives in Paris, said he did not hear about the attacks until he got home for the night and his cellphone started chirping with text messages from friends telling him to turn on the news.

He added that on Friday evening, many of the fair's attendees had gone to gallery parties and other events in the Marais, which borders the 11th arrondissement, the neighborhood where some of the attacks occurred. "People were standing in galleries until three or four or five in the morning because they couldn't leave," he said. "They told everybody to stay inside. It was total confusion."

Now in its 19th year, Paris Photo featured installations by 147 galleries from 34 countries, as well as presentations by more than two dozen book publishers and specialized art book dealers. Among the exhibitors were several galleries from California, including Gallery Luisotti, M+B, and Little Big Man Gallery from the Los Angeles area, and Fraenkel Gallery and Robert Koch Gallery from San Francisco.

Various galleries tweeted links to the statement announcing the closure. Robert Koch Gallery added its sympathies: "Paris, our thoughts are with you in the wake of this terrible tragedy."

The fair has strong connections to Los Angeles. Every spring, the organizers hold a sister fair, Paris Photo Los Angeles, on the Paramount Studios lot. Next April will be the fourth iteration of that fair.

"We have received incredible support and friendship from all over the world, but especially from Los Angeles," Compain said.

Michael Peña, a gallery assistant at Luisotti, which is based in Santa Monica, was at the fair for the first time with the gallery, which was presenting the work of Ron Jude. He and other associates of Luisotti learned what was happening over dinner, as text messages began to roll in. They were a safe distance away from the attacks, but the challenge became getting home.

"There weren't any cabs and Uber was very limited," he wrote via email. "The streets were totally vacant. Eerie for a Friday night in any city."

The current mood, he added, "is somber, mixed with genuine confusion."

In addition to gallerists and publishers, the fair attracted many independent artists too. Painter and photographer Ed Templeton of Huntington Beach was in Paris for the fair and a related book signing and has been posting images from the city on his Instagram account since he landed.

On a photograph of his artist's pass to the fair, he writes:

"Lives were snuffed out, families sent into terrible mourning, people were shot who survived and their lives will be changed forever, cities and governments will be altered, and then something as seemingly trivial as art — who cares what happens to art? But it's also part of the punch in the face humanity took last night. And we all go home licking some wounds with our thoughts on the gross loss of life, wondering if we will be in the crosshairs next time."

Compain said he had not yet begun to tally the financial losses — which would no doubt be significant. Rental fees for the fair's most inexpensive booths checked in at an estimated $21,000. Nearly half of Paris Photo's public opening hours were lost as a result of the tragedy.

"It's too early to tell," Compain said. "It will be a loss, that's for sure. But right now, we are more concerned with the people."

One thing is certain, next year's fair will go on.

"Of course we will continue the show," Compain said. "We will face the barbarians. It's a question of civilization and culture."