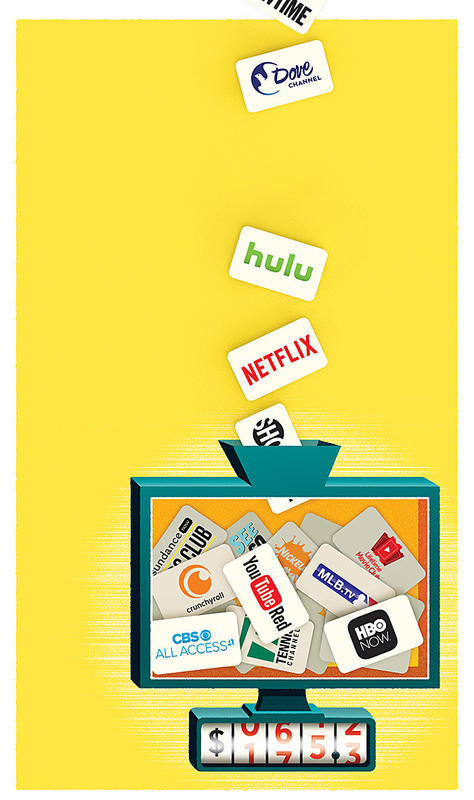 More than 100 Internet video streaming services are now available, and traditional media companies are joining the fray. Here are some of the most popular services:

$99 a year, includes free shipping on products purchased from Amazon.

Prime service includes access, at no additional cost, to movies, music and TV shows — including original productions such as “Transparent.”

Live stream and on-demand access to CBS programming such as “The Good Wife,” “The Big Bang Theory” and classics such as “Star Trek” and “The Brady Bunch”

Two ad-free paid subscription tiers: $6.95 a month for basic tier; $11.95 a month for premium tier, which includes free shipping on products purchased from the Crunchyroll store.

Streams of thousands of episodes of Japanese anime and other Asian content. The service also offers a free, ad-supported online membership.

Soap operas from South Korea, Spanish-language telenovelas and other TV shows and children's programming from Asia

Access to episodes of shows from ABC, the CW, Fox and NBC a day after they air on TV. The service also has a library of movies, TV shows and original productions such as “The Mindy Project” and “Casual.”

Live events, including the Lucas Oil Chili Bowl Nationals, and access to a library of 400 hours of motor sport races, including stock cars, motorcycle racing, off-road racing and drag boats

Access to movies, TV shows and original productions such as “Orange Is the New Black” and “House of Cards”

Access to regular-season football games hours after they air on TV, archived games and NFL films

Nickelodeon shows for preschoolers such as “Blue's Clues” and “Franklin and Friends,” which are delivered commercial-free

NBCUniversal's comedy channel that includes stand-up acts, original shows and reruns of TV shows such as “30 Rock” and “The Office” (Launches Thursday)

Offers original Showtime series — including “Shameless” and “The Affair” — documentaries, movies, music, comedy specials and live boxing matches. Hulu and/or Amazon Prime subscribers can add Showtime to their plans for an additional $8.99 a month.

Nature and wildlife programming available in HD and Ultra HD

Live tennis matches from more than 45 tournaments, including the Australian Open and French Open, archived matches and on-demand programming features such as “Bag Check”

Conservative talk show host Glenn Beck's digital outlet for his programs and other content, including “Real News From TheBlaze”