Local entrepreneurs and artists are driving a cultural revival on the border city’s most popular streets as they move past a wave of drug-related violence.

Local entrepreneurs and artists are driving a cultural revival on the border city's most popular streets as they move past a wave of drug-related violence. 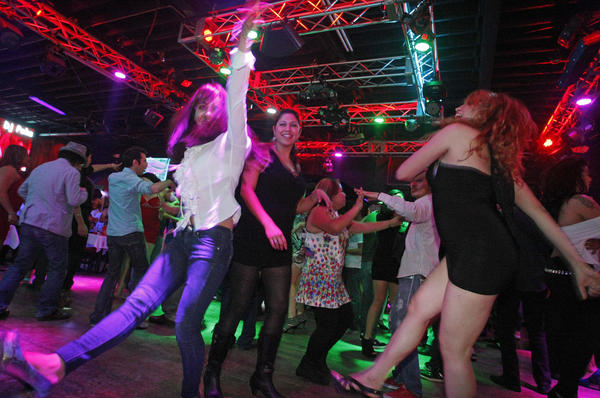 Clubgoers dance with abandon at Las Pulgas, a sprawling Tijuana nightclub often packed with locals, a sign of the border city's night-life resurgence after years in the crossfire of a brutal drug war. More photos

Local entrepreneurs and artists are driving a cultural revival on the border city's most popular streets as they move past a wave of drug-related violence.

Nearby on Callejon de la Sexta (also known as Sixth Street), which not long ago was a wasteland of empty, sinister-looking storefronts, leather- and denim-swathed thirtysomethings spilled onto the sidewalk in front of La Mezcalera, a bar decked out like a cross between a Oaxacan bodega and a Chinese bordello that serves dozens of varieties of mescal.

A half-dozen years ago this stretch of the city was in a commercial death spiral, as a wave of brutal drug-related violence swept across Mexico, engulfing border cities such as Tijuana and Ciudad Juárez. But starting around 2009, young tijuanenses began to reclaim large swathes of their hometown. Taking advantage of rock-bottom rental rates, young entrepreneurs and artists are converting abandoned buildings into thriving new nightspots and trendy retail emporiums. And the people are coming back.

At the Dandy del Sur bar on La Sexta, Ramon Amezcua sips a local craft beer, Border Psycho, in a low-ceilinged room with an aural-olfactory mixtape of cigarette fumes, street-vendor tacos and the jukebox drone of the Smiths' "How Soon Is Now?"

"In 2007 we were afraid to go in the night to the bars, to live the night-life style of Tijuana," said Amezcua, a.k.a. Bostich of the pioneering norteño-electronic fusion group Nortec Collective. "But here, starting with Sixth Avenue, the people started to take back the streets." 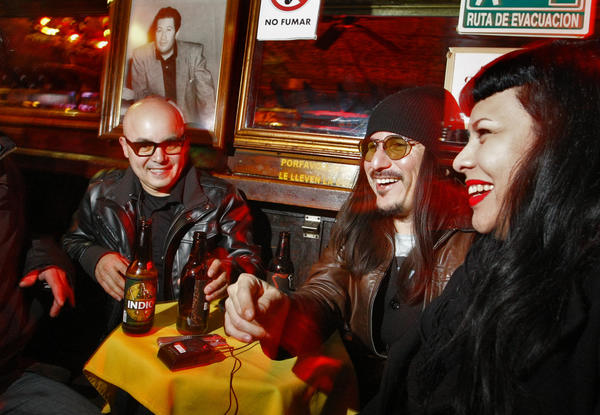 Ever since World War II stopped the flow of vice-seekers that began with Prohibition, Tijuana night life has waxed and waned. The Great Depression slowed tourism to a crawl. Seven decades later, tightened border controls following the Sept. 11 terrorist attacks did the same. Yet after each boom-and-bust cycle the city has managed to reboot.

What's different this time around is that today's cultural entrepreneurs are reclaiming districts like the downtown Zona Centro and Colonia Cacho not for tourists, but for themselves.

"Now when I go to Avenida Revolución, and I don't see a [foreigner], it's shocking to me. Now it's packed with Mexicans," said Luis Ituarte, director of La Casa del Túnel, an art gallery and performance space in a former private home that once contained a drug smuggler's tunnel. "It's exciting, the sense that Tijuana is really retaking the city somehow."

Tijuana's latest Lazarus act began about two years ago, following the January 2010 arrest of reputed crime boss Teodoro García Simental, and the gradual dismantling of the Arellano Félix cartel, which police say has been pushed out by the rival Sinaloa cartel.

The violence hasn't entirely ceased. Earlier this year, in a matter of hours, a string of homicides swept the city, which recorded 42 murders in January. But the homicide rate has fallen dramatically since 2010, when murders spiked at 844 (officially). 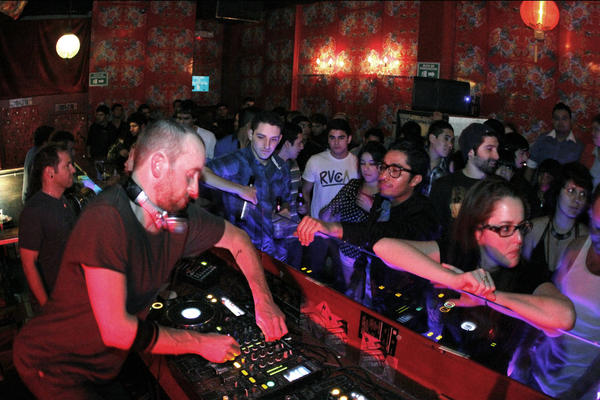 A crowd comes to hear music and down dozens of varieties of mescal at La Mezcalera on La Sexta, one of the more popular streets that's home to various cantinas and shops. More photos

By most accounts, the first sign of downtown Tijuana's resurgence was the opening in 2009 of La Mezcalera. César Fernández, 37, the bar's co-owner, estimates that 95% of his clientele are from Tijuana.

"The ones who come are the more experimental people, the ones who appreciate the culture," Fernández said, "not the ones who want to get drunk and take tequila shots."

Since La Mezcalera staked its claim, dozens of other funky-chic cantinas, such as Moustache Bar, have opened nearby, elbowing in among older fixtures such as La Estrella and Porky's Place. Dance clubs also are packed, like the massive Las Pulgas, which on weekends draws swarms of young factory workers, the women encased in spangly dresses and teetering on stilettos, and los machos in tight jeans and cowboy boots.

Tijuana's current revival isn't limited to bars and nightclubs. Alternative art galleries, performance spaces, high-end restaurants, organic cafes, and new and vintage clothing shops are among the enterprises sprouting around La Revu (Revolución) and La Sexta, as well as in the nearby Colonia Cacho district. Two downtown alleyways, Pasaje Rodríguez and Pasaje Gómez, have been transformed from grim no man's lands of abandoned tourist traps into modest cultural start-up zones.

"The tourists weren't coming, and so we had to take over empty spaces," said Jesus López, a Tijuana native, DJ-producer and promoter. "That's the thing with TJ: I've seen it change completely three or four times. I don't know where it's going to land, but I know it is shifting."

In a way, Tijuana is simply picking up where it left off before former President Felipe Calderón's crackdown on Mexico's powerful drug cartels prompted a vicious blowback that has claimed an estimated 60,000 lives since 2006.

In the late '90s and early 2000s, the city was gaining a reputation as a dynamic center of cultural production. Musicians such as indie rocker Julieta Venegas and the punk-ska band Tijuana No! gained a cross-border following. Nortec Collective grafted traditional norteño instruments like trumpet, tuba and accordion onto electronic dance music.

That's the thing with TJ: I've seen it change completely three or four times. I don't know where it's going to land, but I know it is shifting."

One recent night the building's rear courtyard shook to blasts of reverb-y psychedelic guitar as a local band played to a mellow, chain-smoking audience while animated video projections flashed across a bare wall.

"I think gringos trip out when they see this place packed," said Adam Mekrut, a San Diego college student who commutes regularly to Tijuana for its late-night offerings. "It's awesome," he said of Tijuana, "and it's the only thing that makes San Diego livable for me."

Mekrut and Andrea Noel, a native Angeleno and photographer who has lived in Tijuana since 2008, belong to a small but growing number of young Californians drawn to the Mexican city's creative possibilities. Noel acknowledged that "everyone was very closely affected" by the narco-related violence.

But although outsiders remain leery, Noel said, "there's also a sort of counterpart of young people" who've managed to assimilate by giving a wide berth to the city's criminal elements.

"It was kind of interesting timing to come in right before this resurgence, which has sort of come in waves," Noel said. "It has its really up moments and then it has sort of these standstills where nothing much really happens." 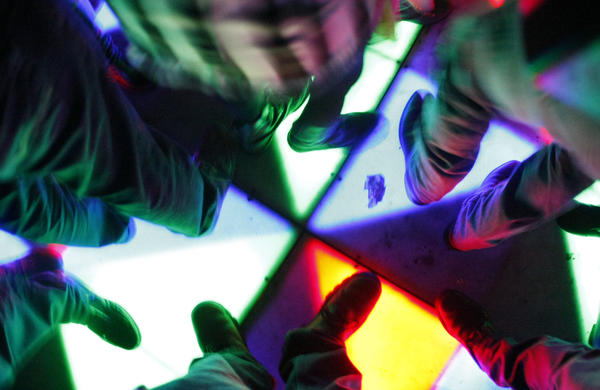 Tightly packed dancers at La Mezcalera shuffle around to the techno beat of a DJ on the illuminated floor. The place draws hip locals to Tijuana's nightclub district on La Sexta. More photos

Tijuana's burgeoning bar and gallery scene has helped propel the city's second-wave homegrown music industry, including up-and-coming artists like Madame Ur and La Ballena de Jonás. Tony Gallardo, 26, a Tijuana-bred DJ-musician who started mixing classic cumbia and tropical loops with electronic chord washes and ambient street sounds when he was 19, wears a ski mask or motorcycle helmet when he performs — "like a budget Daft Punk," says Mekrut, a friend.

Or perhaps a bilingual Brian Eno. As a member of the avant-garde electronic dance music collective Los Macuanos, Gallardo has spearheaded Tijuana's latest techno-music genre, ruidosón. The term indicates its combination of "noise" music, a kind of spikier version of house (ruido is Spanish for noise), and són, Latin American song.

The members of Los Macuanos first met via the Internet, in the years when many young tijuanenses stayed home and did their socializing online; it was too dangerous to venture out at night. Like Nortec Collective before him, Gallardo often explores his native city's dark side in his music. "Rey de Reyes" (King of Kings), the second album by his other project, María y José, adopts the viewpoint of a drug lord, but doesn't lionize Mexico's underworld figures the way that narcocorrido singers do.


View Nightlife in Tijuana in a larger map

"We like to be like the troublemakers," Gallardo said. "But also we are not punks either. We're not anarchists. We just like to mess with politics and with social polity. And we like to talk about love."

For an artist, Gallardo said, Tijuana is "a good place, but it hasn't been exploited in the manner it could be exploited." Like their predecessors, the city's new-generation artists are in some ways more recognized in Mexico City, Los Angeles and other distant metropolises than they are on La Sexta.

Jason Fritz, a photojournalist and Tijuana resident since 2009 who writes the Tijuanalandia blog, suggests that the city's young creative classes will benefit from seeing themselves as part of a broader, Internet-linked global conversation. They are no longer merely "border" artists, he said, inextricably linked to that bigger, richer country on the other side of the rusting metal fence.

"This new generation of young kids that are making music, they don't define themselves as a border city. They're just like, 'We're part of a world community that's doing this stuff,'" Fritz said. "They don't see themselves as anchored to the United States. Which to me is really interesting, because that's when more amazing things happen."

Antoine's is her family legacy, but is she ready?