A disclosure: A little over a year ago, I became co-owner/caretaker of a cat. This is my first pet. Until now, I never thought of myself particularly as a cat person or a dog person, and really, I still do not. I am, in my own mind, animal agnostic.

Which is prelude to a second disclosure, which I imagine may strike some as controversial: I have come to believe that cats make better performers in movies than dogs.

That is, I find cats on-screen more compelling, because they convey an alertness, an intelligence and an air of mystery that to me implies a consciousness and the building blocks for drama. I can't quite figure out what they are thinking, but I think they are thinking something. When I interviewed filmmaker Alejandro Jodorowsky last year, he referred to cats as magical creatures, and although I don't know if I would go quite that far, I can see his point.

INDIE FOCUS: Sign up for Mark Olsen's newsletter about film

Dogs, on the other hand, seem affectionate, eager and loyal, fine qualities for a pet but not necessarily for gripping drama. In a movie, I feel I can sense the presence of a trainer dangling a treat or something shiny just off-camera far more with a dog than a cat. I enjoy Eleanor Powell's number in 1941's "Lady Be Good" as much as anyone, but I wouldn't credit her dance-partner dog with a nuanced screen turn. Yet there has never been a beloved cat film superstar; "The Cat From Outer Space" isn't quite in the same league as "Lassie."

On the one hand, it could be my own newfound proximity to an animal that has heightened my awareness of animals in films. On the other, it could be that because of films such as last year's "Dawn of the Planet of the Apes," which used performance-capture technology to render deeply felt turns by what appeared to be all manner of simian creatures, I now expect more from on-screen animals.

Don't get me wrong: I enjoy dogs in movies as much as the next person. In the recent Hungarian film "White God," the lead dog, Hagen, is seen trying to reunite with the young girl who cared for him. After being abandoned by the girl's father, Hagen is captured by a cruel master who trains him to fight other dogs, but he escapes to lead something of a dog revolution. Building to scores of dogs running in the streets as a default army, the film becomes a complex analogy for the rise of the underclass.

The plot in the recent "John Wick" is set in motion by Keanu Reeves as an assassin looking to avenge the senseless killing of his dog, Daisy, played by a dog named Andy. "The Drop," starring Tom Hardy, is likewise given an added element of emotion by a dog in peril. In the film "Saint Laurent," the drug-hazed days of Yves Saint Laurent bottom out when the designer's beloved French bulldog Mojik overdoses on drugs left out after a party. Even in "The Road Warrior," Mel Gibson's Max is at his lowest point, his most adrift and bereft, when post-apocalyptic marauders kill his dog. There has also been interesting writing on the demise of animals in the films of Wes Anderson. (Intriguingly, both cats and dogs.)

One of the most notable cat performances of recent years has been in Joel and Ethan Coen's "Inside Llewyn Davis," in which Oscar Isaac's title character, a struggling folk musician in 1961 New York, tries to keep track of a cat that has inadvertently fallen into his care. A number of felines were actually used to portray the on-screen cat's many moods and activities, while the Coens were often quoted as paraphrasing an animal trainer who told them that dogs wanted to please you, while cats wanted to please only themselves.

In last year's "Gone Girl," the cat shared between Ben Affleck's Nick and Rosamund Pike's Amy becomes something of a pawn in their shifting power dynamics, appearing in proximity to one or the other and somehow tipping the scales this way or that for audience identification between the couple. In a home video commentary track, director David Fincher noted how in the role of Bleecker, the real life cat Cheeto was great to work with because he could be put in a spot and would just stay there for hours. 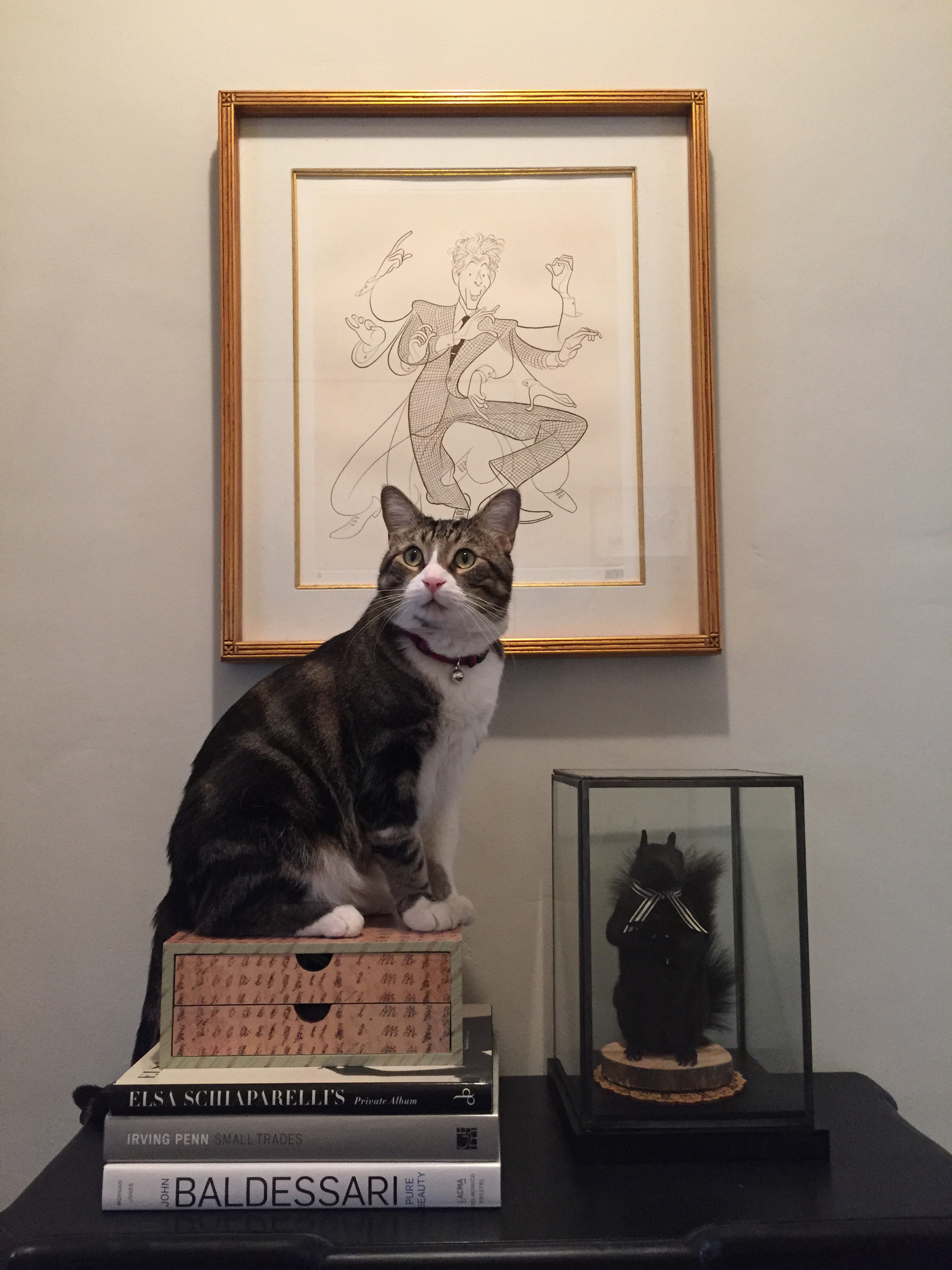 Part of what makes cats in real life and on-screen such compelling creatures is their slightly distant quality, the way in which they always seem to have a secret. In "Gone Girl," one really wants to know just what that cat has seen, what it could spill about Nick and Amy behind closed doors. Few moments in movies last year were more quizzically enigmatic than when Nick led two police officers through the house after his wife's disappearance and noted, "That's the cat's room." The cat gets its own room?

The film "Listen Up Philip" also features a fantastic cat performance by Fluffy, the actual pet of writer-director Alex Ross Perry, as Gadzookey. In one scene of liberation, a character played by Elisabeth Moss picks up the cat to talk to while giving a final heave-ho to her toxic ex-boyfriend, played by Jason Schwartzman. Perry has referred to the cat in the movie as "the physical embodiment of love and healing and hope, as he is for me."

In "A Girl Walks Home Alone at Night," Ana Lily Amirpour's black-and-white vampire western romance, a cat named Masuka plays the Cat, who genuinely becomes the film's guiding presence, for lack of better term, its spirit animal. A number of times, the cat looks straight at the camera; rather than breaking the spell of the film, it actually heightens it, connecting the audience to the on-screen action in a remarkable way.

All this isn't to say that movie animals come down strictly to a cats-versus-dogs divide. Just this year has seen the release of "Kumiko, The Treasure Hunter" which has an outstanding performance by a rabbit referred to as Bunzo. And the coming horror movie "The Witch" features a deeply unsettling turn by a goat called Black Phillip.

I turned to Twitter recently and asked folks to name their favorite animal performances. This brought out a wide array of responses about animal performances in a wide a swath of comedies, musicals and dramas, including "The Long Goodbye," "Bringing Up Baby," "Topper," "The Thin Man," "I Remember Mama," "Breakfast at Tiffany's," "White Dog," "Babe," "Beethoven," "Beginners," "Au Hasard Balthazar," "Closed Curtain," "Le Quattro Volte" and, of course, "The Wizard of Oz." (I was surprised that no one mentioned Clint Eastwood's fighting orangutan movies "Every Which Way But Loose" and "Any Which Way You Can.")

Perhaps splitting the difference between cats and other animals is the recently re-released 1981 oddity "Roar," in which giant jungle cats live with a family, as they did in real life with actress Tippi Hedren and her then-husband and the film's director, Noel Marshall. It's funny to see animals of that size essentially behaving as house cats do and terrifying when they playfully swat at a human head. Many people involved in the production, including Hedren's daughter, Melanie Griffith, and cinematographer Jan de Bont, were injured by the cats during production. (The film's recent advertising declares: "No animals were harmed in the making of this movie. 70 cast and crew members were.")

So my own recent preference for cats on-screen is maybe just a sign that I've become more attuned to something I previously overlooked. In a sense, that is the power of cinema to focus our minds on new perspectives, so we can attempt to see with the eyes of others.

As I consider this more, I'll most likely be at home, trying to understand this cat.

Mark Olsen writes about all kinds of movies for the Los Angeles Times as both a feature writer and reviewer.