When graphic designer Satyajit Ray began shooting his first feature, a story of village life in his native India called "Pather Panchali," his only filmmaking experience was as a location scout. His 21-year-old cinematographer had never before used a movie camera.

The novices' collaboration produced not just an extraordinary directorial debut but a landmark of world cinema and an unforgettable protagonist, the wide-eyed and perceptive boy Apu.

Acclaimed at the 1956 Cannes Film Festival and on home turf upon its Indian release, "Pather Panchali" would go on to enjoy an eight-month theatrical run in New York. Two sequels, "Aparajito" (The Unvanquished) in 1957 and "Apur Sansar" (The World of Apu) in 1959, would trace Apu's adolescence and young adulthood. The films reaped more than three dozen international awards, including the Golden Lion, the top prize at the Venice Film Festival.

Inspired by the Italian neorealists and mentored by the French master Jean Renoir, Ray became a leading figure of Parallel Cinema, a movement that rejected the song-and-dance escapism of Bollywood's mainstream Hindi fare. He worked prolifically for four decades, exploring a range of characters through rigorous craft and a singularly loving lens. That combination of precision and compassion put him in the same realm as Renoir and the Japanese auteurs Yasujiro Ozu and Kenji Mizoguchi.

A year after Ray's death in 1992, the Apu Trilogy's original negatives, awaiting the long-overdue care of restorers, were among the casualties of a massive film-vault fire in London. Resurrecting the damaged features would take the foresight and vigilance of the Academy Film Archive, worldwide searches for surviving prints, a 20-year wait for the right technology and two-plus years of meticulous digital restoration by the whizzes at the Criterion Collection — "the hardest thing we've ever done," according to Peter Becker, the DVD label's president and a partner in sister company Janus Films, distributor of the films.

Angelenos can see the results when the trilogy opens May 29 at the Nuart in West L.A. Earlier this month, nearly 60 years after Ray's original Manhattan triumph, the movies opened in New York to per-screen average ticket sales second only to that of "Avengers: Age of Ultron." Bookings through the summer will take them to more than 30 art houses across the country.

The restoration is a gift to movie lovers, who until now could experience Apu's timeless story only through decades of wear and tear. Their revitalized state, Becker said, is "a more refined representation of what is on the negative than any print that was ever made in the history of the films." The soundtracks — which introduced sitar great Ravi Shankar to the West — have been pieced back together too from many sources. Filmgoers can hear Shankar's stirring score and see Subrata Mitra's luminous black-and-white cinematography in all their nuanced depth.

Based on two novels by Bengali writer Bibhutibhushan Banerjee (last name alternately spelled Bandyopadhyay) and filmed in locations that include the holy city of Varanasi and the metropolis Kolkata (formerly known as Calcutta), the movies are alive with indelible details and staggering emotional power.

"Pather Panchali" (a.k.a. "Song of the Little Road") contains one of the most breathtaking scenes in all of cinema: Apu and his sister's first glimpse of a train in motion. That moment echoes in "Aparajito," deepened by loss, when the teenage Apu shares the wonder of a globe with his mother. Among the jubilant and heart-wrenching sequences in the third film, "Apur Sansar," there's the newly married Apu's tender, understated delight at finding his bride's hairpin in the bedsheets.

It was in the course of producing a montage reel of such moments for Ray's honorary Oscar (he died less than a month after accepting the award from his hospital bed) that the Academy of Motion Picture Arts and Sciences became aware of the poor condition of his films. Their deterioration was partly a result of the movies' popularity and the Indian industry's practice of using the original negative to strike exhibition prints. The lack of a preservation infrastructure didn't help.

Beyond that, India's heat and humidity offered the precise environmental conditions that accelerate acetate film's decay, said Michael Pogorzelski, the Academy Film Archive director. All these factors made the restoration of Ray's movies a challenge, but the 1993 fire at Henderson's Film Industries in London seemed to make it impossible.

The damaged reels were deemed unusable because they lacked the resilience to be printed photochemically. But the director of the academy archive at the time, Michael Friend, had the material sent to Los Angeles anyway — a move Becker called heroic.

The archive had its eye on a far horizon: the restoration of Ray's entire filmography. No piece of the puzzle, however compromised, could be dismissed out of hand.

"If there was anything that could be salvaged from the negatives that were caught in the fire," Pogorzelski said, "that would be one less piece that would need to come from another source." 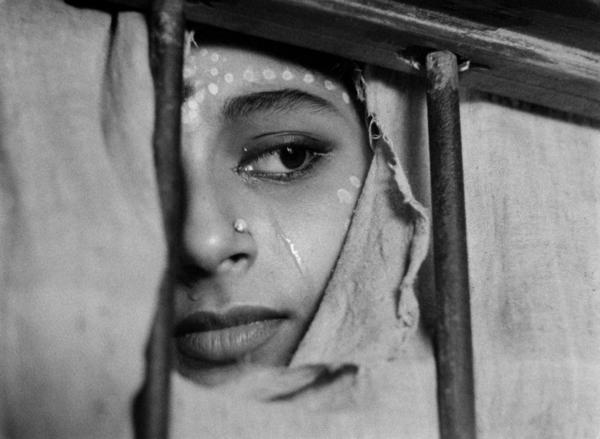 When the Criterion Collection took the lead on the Apu restoration, technical director Lee Kline's first look at the canisters' contents was disheartening. "It was burnt, it was flaking, it was yellow," he said. "It just looked like something no one should touch."

L'Immagine Ritrovata restoration facility in Bologna, Italy, embarked on the material's physical repair, an enormous job that entailed rehydrating the parched negatives. From there, Kline and his team were able to begin the arduous process of scanning the material into 4K files (4,000-pixel horizontal resolution) and determining which images were usable and which would have to be sourced from other material from collections on three continents. The mixing and matching were, Kline said, a logistical nightmare.

"We really put our chief engineer through the ringer with this one," he said.

The digital approach is by no means an automated one for Criterion.

"We want the film to look and feel like the film itself, and not feel like a digital postcard of the film," Becker said. "So most of our work is done by hand — piece of dirt by piece of dirt, tear by tear, splice by splice, warp by warp."

In the scrupulous restoration, the ravishing beauty of Ray's vision shines through. His deep regard for every character, through every twist of fate, is unwavering. His films are a joy to discover, and the discovery deepens with each viewing — even for those hard at work.

"One of the things that is great about restoring a film," Pogorzelski said, "is you have to watch it over and over again."