Sometimes it seems as if Hollywood has it out for humanity. In the past year at the movies, mankind has been pummeled by a megalomaniacal robot ("Avengers: Age of Ultron"), global blight ("Interstellar"), rampaging primates ("Dawn of the Planet of the Apes") and skyscraper-size beasts ("Godzilla").

The latest big-screen cataclysm arrives Friday in the form of "San Andreas," a 3-D thriller starring Dwayne "The Rock" Johnson as a helicopter pilot out to save his estranged wife (Carla Gugino) and their daughter (Alexandra Daddario) from a massive earthquake that splits California at the seams.

As directed by Brad Peyton, "San Andreas" is what one might call a pure disaster movie, in which the destruction isn't caused by invading aliens or ravenous zombies but by Mother Nature. The damage isn't a byproduct of a clash between heroes and villains. The damage is the whole point.

But why do audiences delight in watching disasters on screen?

"People don't like when it happens to them, but they love to watch things like that happen to other folks," said Jonathan Kuntz, a professor of film history at UCLA.

The tradition of disaster movies dates to the early days of cinema, Kuntz said — 1936's "San Francisco" depicts an earthquake, too — but it tends to work in cycles. The 1970s gave us movies like "The Poseidon Adventure" and "The Towering Inferno," and the dawn of digital effects in the 1990s opened the door for "Independence Day," "Twister" and "Armageddon."

Nowadays, in an age when people are fretting over global warming, Ebola outbreaks and intractable wars, entertainments like "San Andreas" allow us to experience disasters from the comfort of the movie theater seat, Kuntz said. And, he added, "Of course we identify with the people that survive, not the people that Godzilla steps on."

Here's a closer look at some notable disaster movies, along with an unscientific Implausibility Scale: from 1 (practically a documentary) to 10 (totally ludicrous). 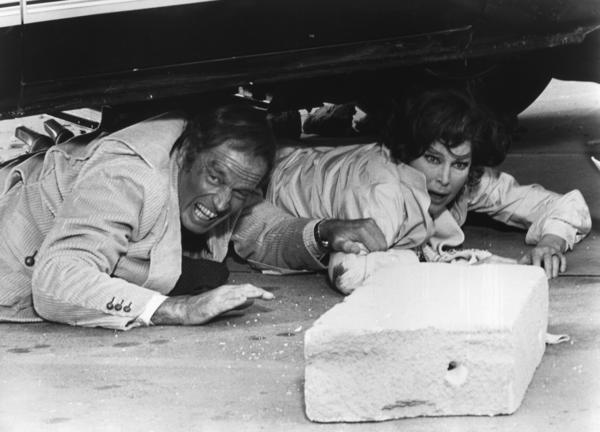 Memorable moment: The onset of the quake, in which the widespread calamity includes a self-referential scene of a movie theater caving in.

Questionable survival plan: Setting up a triage center in the basement of a multistory shopping center, which is summarily destroyed by an aftershock. 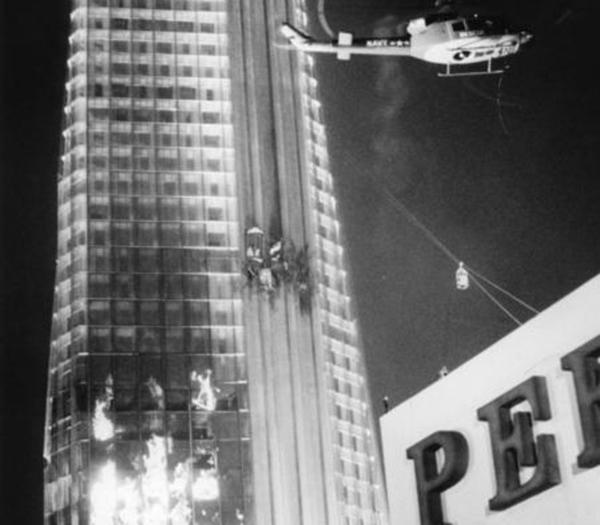 A scene from "The Towering Inferno." (20th Century Fox)

Disaster: In San Francisco, the world's new tallest building catches fire on the day of its dedication, forcing a fire chief (Steve McQueen) and the skyscraper's architect (Paul Newman) to spring into action.

Memorable moment: A rescue attempt goes awry when a helicopter crashes into the rooftop and bursts into flames.

Questionable survival plan: Blowing up the building's water tanks to flood the tower and extinguish the fire. 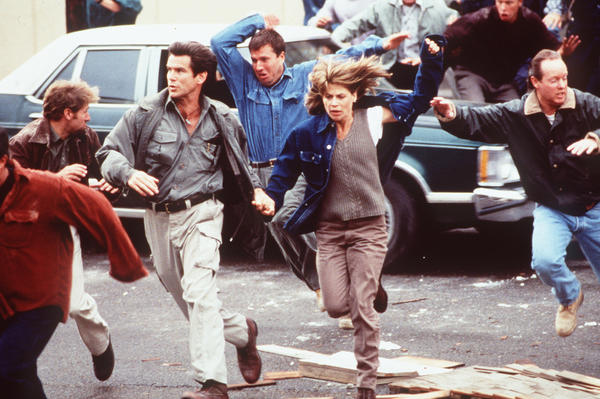 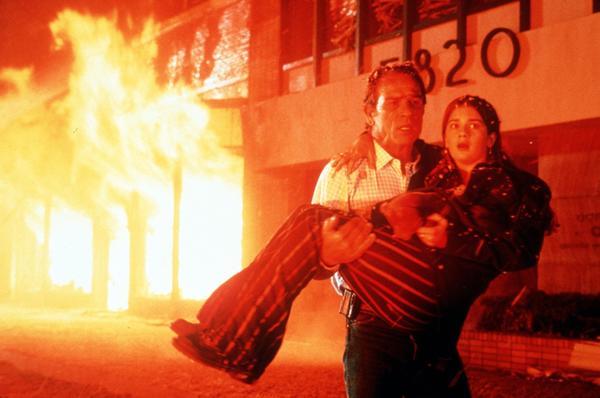 Memorable moment: In "Dante's Peak," Brosnan's scientist drives the mayor and her two kids across a river of lava in his pickup truck — and they save the family dog in the process.

Questionable survival plan: In "Volcano," the good guys blow up a high-rise building to divert lava flow into the Pacific Ocean. 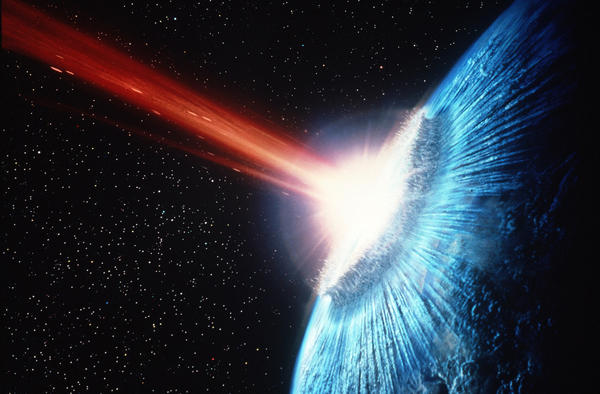 Disaster: In "Deep Impact," a young astronomer (Elijah Wood) and a journalist (Téa Leoni) try to warn the world about a comet on a collision course with Earth; in "Armageddon," a deep-sea driller (Bruce Willis) and his crew help try to divert an asteroid. 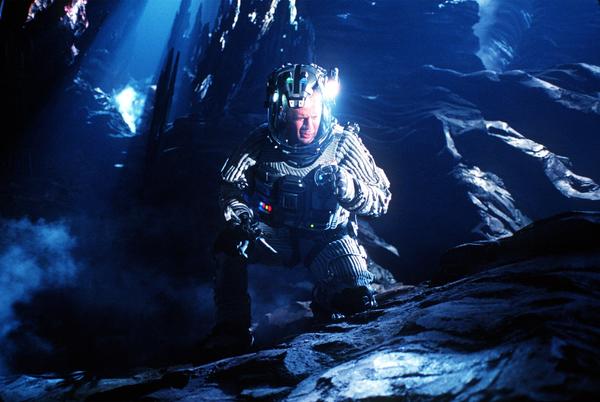 Memorable moment: In "Armageddon," the president (Stanley Anderson) delivers a stirring global broadcast as Willis and company prepare to blast off.

Questionable survival plan: Both movies involve sending astronaut teams to the comet/asteroid to blow it apart with nuclear weapons. 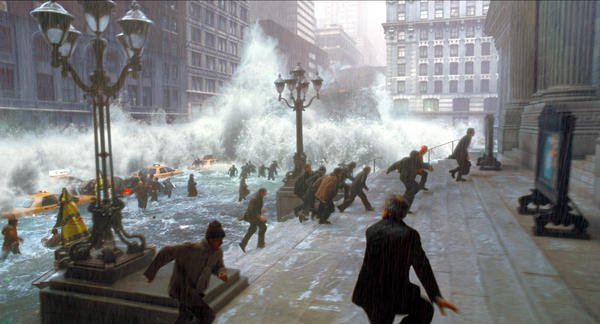 A scene from "The Day After Tomorrow." (20th Century Fox)

Disaster: As global warming causes superstorms that usher in a new ice age, a paleoclimatologist (Dennis Quaid) tries to reunite with his son (Jake Gyllenhaal). 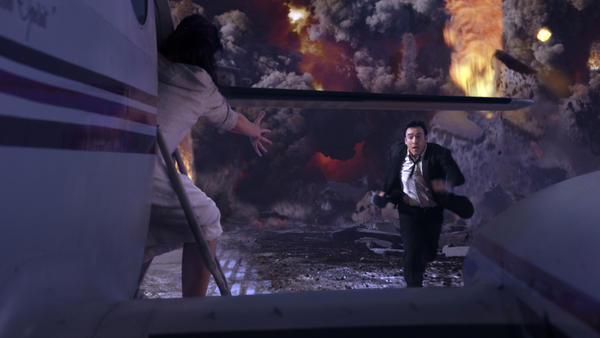 Disaster: When a huge solar flare raises the temperature of Earth's core, causing devastating earthquakes and floods, a limousine driver (John Cusack) endeavors to save his family.

Memorable moment: Cusack essentially outruns the apocalypse in his limo, dodging collapsing buildings, streets and freeways — and a dislodged chunk of Randy's Donuts.

Questionable survival plan: Building a fleet of enormous arks to save a fraction of humans and animals.

Oliver Gettell is a former film blogger for the Los Angeles Times.