For some Coachella festival goers the party begins in the sky, where for $1,500 round trip passengers can skip the traffic and travel in private luxury.

For some Coachella festival goers the party begins in the sky, where for $1,500 round trip passengers can skip the traffic and travel in private luxury. 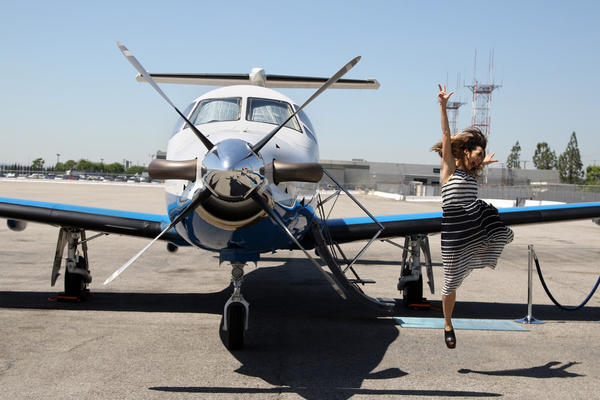 Izzy Lawrence, from the United Kingdom, jumps up in the air as she has her picture taken in front of Surf Air's Pilatus PC-12 at Bob Hope Airport in Burbank.

For some Coachella festival goers the party begins in the sky, where for $1,500 round trip passengers can skip the snarled freeway traffic and travel in private luxury.

Cocktails were already being served when Izzy Lawrence dropped her bags with a smiling Surf Air attendant.

The DJ-slash-model-slash-BBC-TV-presenter-slash-Oxford-grad snapped pics with her friends inside the private-plane terminal of the Burbank airport. A young bartender in a cornflower sundress offered guests their choice of high-end flavored vodkas.

"No selfies," Lawrence said, laughing. "For other people it's OK, but on my blog I draw the line at selfies."

It was around noon on Friday, and in less than an hour, the lissome brunet with stylishly prominent eyebrows would be within sight of the Coachella Valley Music and Arts Festival. She's known around London for her series of dance parties, "Apocalypstick," but during the first Coachella weekend she would spin records at an off-site party sponsored by the preppy clothing company Lacoste. (Later, her Instagram featured a shot of tawny twentysomethings bobbing in a crystalline pool with inflatable alligators.)

She didn't have to wait until landing on the blazing Bermuda Dunes airstrip, though. For Lawrence and her six fellow passengers, the VIP Coachella party had already begun.

Perhaps the last democratic space of a festival once synonymous with young bands and broke fans scraping it out in the desert was that band of the 10 Freeway from Los Angeles to Indio. There, one-percenters and the sweaty "Carpool-chella" masses had to sit in snarled traffic together.

Surf Air, a new private aviation firm, has solved that last problem — for $1,500 for a round trip, 30 minutes each way. 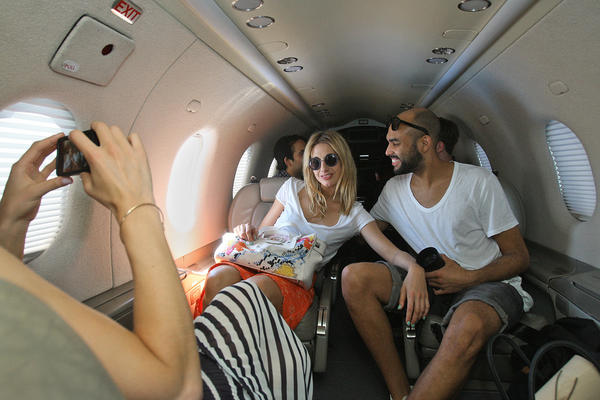 Inside the cabin of the Pilatus PC-12 turboprop, the guests reclined in cream-colored leather seats. The refreshment cabinets were appointed with dark wood-panel trim. The two-man pilot crew offered up a choice of frosty soft drinks and chips.

Most of the passenger seats faced each other, as if to spur conversation about the pleasures of traveling like this. The cabin was full of nonchalant glee, everyone acting as if it were totally natural to take a private plane from L.A. to Coachella.

The East London photographer and designer Tom Hardy and his girlfriend, Sophie Ball, a writer for U.K. fashion magazine Hunger and the VIP relations manager for the fashion firm All Saints, took seats across from Lawrence. Hardy wore a low-slung T-shirt and artfully hemmed denim shorts, while Ball donned a cheap black baseball cap that read "FRIDAY" in rainbow letters. Hardy shot goofy photos of her and Lawrence in mock-party-girl poses.

"For so long, I didn't know what I was — am I a DJ? A photographer? A designer?" Hardy wondered aloud, to sympathetic nods from his friends.

"My dad still doesn't quite understand what I do for a living," Lawrence said, laughing. "He tells people I'm an 'announcer,' like it's the 1940s."

For them, the ultimate luxury is saving time.”

The English singer-producer James Blake, who garnered a Grammy nomination for last year's album "Overgrown," quietly sat behind them with a small bag of equipment. He wasn't playing the festival proper, just headed out for "a DJ gig and some parties," including one at a mansion in nearby La Quinta for the members-only club Soho House.

Passengers on the day's earlier inaugural flight to Coachella had already Instagrammed their good times onboard. "Off to Coachella #surfair #Baby!!!" wrote the singer Rita Ora, posing in front of the blue-and-white plane in a black Stevie Nicks-style lace dress and sun hat.

The tickets for these Coachella jet-setters were mostly comped by Surf Air. But they were exactly the kind of media-fashion-music elites that wealthy tech investors and execs want to meet.

"The way the plane's arranged, you can't help but start conversations. I've struck up real friendships and business relationships on flights," said Chris Kantrowitz," the CEO of Gobbler, a file-swapping service for musicians and creative professionals. "You feel like this band of roving air nomads together."

This year, Surf Air added the Coachella festival to its portfolio of California destinations for clientele who pay a $1,599 monthly membership fee (or for one-time guest tickets later applied to a membership).

With much new wealth flowing to younger tech and start-up executives in California, there's a growing overlap between the private-plane set and eager Coachella fans. (A similar service from the ride-sharing app Uber will whisk you to a private, Coachella-bound helicopter.) 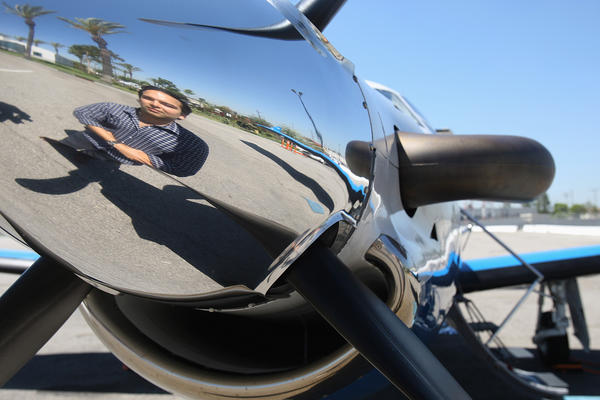 "Our clients want to do more with their weekends, be it tennis in Palm Springs or to go to Napa and Burning Man," said Sudhin Shahani, Surf Air's chairman. "For them, the ultimate luxury is saving time. A lot of our members go to Coachella, and this makes the festival more accessible for them."

One of Surf Air's early investors, the actor and 30 Seconds to Mars frontman Jared Leto, was a fixture backstage at Weekend 1 of Coachella.

"Surf Air aims to solve a really simple but widespread issue: How do we make flying fun again?" Leto said. "It's incredibly stimulating to interact and collaborate with people that are filled with optimism and possibilities about our future."

Cruising at 20,000 feet, the familiar landmarks of the Coachella journey — the Inland Empire sprawl, the snow-topped mountains — passed underneath in a blur.

Hardy snapped photos of the white windmills that lined the beige hills just west of Palm Springs. The field of spinning blades is a Coachella welcome beacon. It usually means your long journey east on the 10, in the punishing heat and grinding traffic with frustrated fellow music fans, is almost over.

There's a growing overlap between the private-plane set and eager Coachella fans.

This airborne vantage point, however, seemed to embody the new, luxury Coachella experience. Passengers can see everything, while separated from the sweaty, smoggy humanity of it all. The sun-pocked desert below turned into Palm Springs' iridescent swimming pools and golf courses.

As the flight turned into its landing pattern, Hardy clicked away while Lawrence and Ball posed by the plane windows. Hardy could see the lines dividing Coachella's decadence and the desert's harshness.

"It's such a contrast," he said. "You have this big field of desert and total emptiness, and then right next to it is this lush, green party oasis."

The plane glided into a landing and came to halt on the Bermuda Dunes tarmac. The Coachella Valley sun was punishing, and Lawrence and her fellow passengers donned dark sunglasses to deplane.

Lawrence seemed calm as she talked about renewing her visa to stay in America.

"I feel like people don't really need to 'live' anywhere," she said. "I just sold all of my stuff and it's the best feeling."

The passengers piled into their arriving Uber-X cars, bound for the VIP tents, lawn parties and late-night mansion soirees of Coachella 2014. All of them were smiling, and raring to hit the pool. 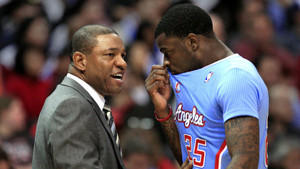 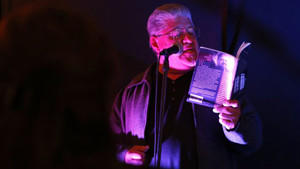 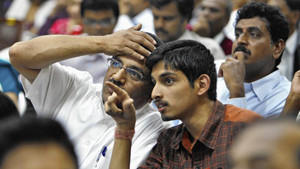 You just need...some confidence and a good friend who can help you out during the exams.”