Life’s end is a conversation-starter at Betsy Trapasso’s Topanga Canyon home, where there is no point of view beyond the broad notion that death deserves discourse.

Life's end is a conversation-starter at Betsy Trapasso's Topanga Canyon home, where there is no point of view beyond the broad notion that death deserves discourse.

If you're going to talk about a subject most people don't want to talk about, why not do so over tea and cake and cookies?

Why not gather in a sunny living room looking out on a lush tangle of green, where you can watch the breeze ruffle the leaves on the trees as you eat forkfuls of blueberry tart?

Death comes to each of us, to everyone we love. Couldn't talking about it in a safe, comfy setting make the prospect less frightening?

This is what Betsy Trapasso thinks. This is why she's asked friends to come — why on a Sunday afternoon, they've braved Topanga Canyon's twists and turns and climbed the dozens of wooden steps to her end-of-a-rural-road front door.

Together, they will make history at Los Angeles' first Death Cafe.

Ever since a fellow named Jon Underwood held his first Death Cafe a year and a half ago in the basement of his London home, they've been popping up all over the globe.

His website lists numerous U.S. outcroppings — in Gig Harbor, Wash., and Searsport, Me.; in Ann Arbor, Mich., and Cleveland. 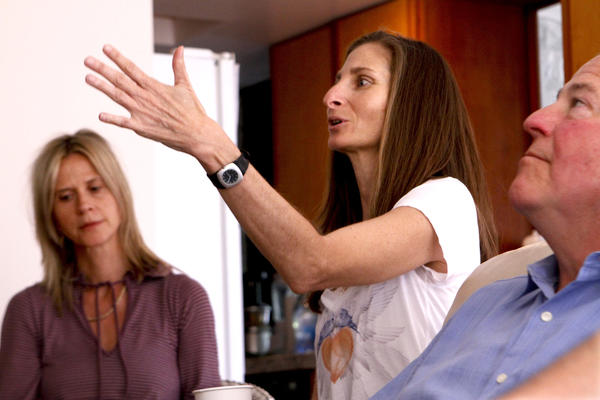 There's no agenda. No profit motive. No point of view beyond broad notions: that death deserves discourse, and that facing it without angst can help people live their lives more fully.

"It's not a support group. It's not a grief group," Trapasso says. "My whole thing is to get people talking about it so they're not afraid when the time comes."

To her house come an eclectic bunch, including a graphic artist, a psychologist, a film director, an LAPD sergeant and an actor/producer who wishes to remain anonymous and carries his white Maltese, Blossom, in his shoulder bag.

They gather in a loose circle — on a couch, in chairs, on the floor.

Trapasso is lithe, with flowing brown hair, a moon face and large, intense blue eyes. When she was a baby, those eyes won her the nickname "Spooky," which stuck.

With those eyes, her friends say, the end-of-life guide is able to ease people's last moments on Earth.

Because this is Topanga, Trapasso bangs a drum to begin the discussion. Then she passes around a vial of lavender oil and asks people to breathe it in deeply and relax.

But death has been her life.

The first U.S. hospice, she tells her friends, came to her hometown of Branford, Conn., in 1974. Her grandfather, as mayor, pushed for it and took Trapasso to meetings.

She came west to USC to get her master's in social work. After graduating, with a Thomas Guide in her lap, she learned Los Angeles — "every neighborhood and every culture and every race, the richest of the rich and the poorest of the poor"— by bringing comfort to the dying as a hospice social worker. 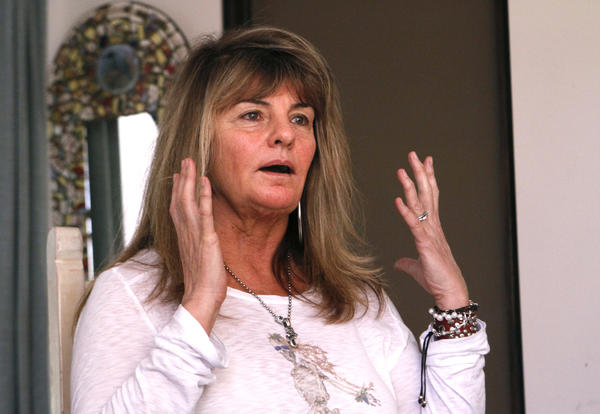 "The first person I ever saw dead was my grandmother," says Dori Fisher. "She never wore makeup, but she was all made up and she was wearing something she would never wear. I said: 'That's not my grandmother.'" (Anne Cusack / Los Angeles Times) More photos

Now, she says, she wants to retrace that journey, carrying with her to venues all over L.A. a profound, floating conversation.

Trapasso says she also plans to make a documentary on how other cultures integrate death into life.

One of her partners, Leszek Burzynski, a British-born director, says America needs to learn to do this better.

That's a problem, says Trapasso's roommate, Jane Plotkin — a former marriage and family therapist who says she became a clairaudient, hearing voices from beyond, after a "major visionary experience."

"There are so many people who live in fear of death, and that's one of the reasons we have such a youth-obsessed culture and a culture that turns away from aging."

The way we die is about to change, Burzynski says. He's convinced of it.

Aging baby boomers will demand better options, and they know how to get things done.

His mother, he says, grew up in a village. As a girl, she helped wash and lay out the bodies of the dead.

Most deaths used to be at home, he says. Now that's rare.

"We all want to make a good death. If you ask anybody, 'How do you want to die?' they'll say, 'In the bosom of my family, with my friends around.' They don't say, 'In a hospital bed with tubes coming out of my nose and my ears, in a semi-coma — that's my perfect death.'"

Plotkin describes her mother's "grueling, grueling" end, on a respirator.

If one day she finds out she is dying, she says, she wants to choose when and "have some help to let go." Jane Plotkin says that if one day she finds out she is dying, she wants to choose when and "have some help to let go." (Anne Cusack / Los Angeles Times) More photos

"I'd like to have a few of my friends and be able to say all the things I'm grateful for in my life and thank everyone and end on a good note."

Why are the odds stacked against getting to determine our own goodbyes?

Grandma never wore makeup or lipstick. That person in the satin-lined box looked like an over-decorated cake.

"I think that dying is as individual as living. And that's what we don't take into consideration," she says. "Everybody should be able to die in the way that they want to, maybe as they lived."

The volatility of grief, the way the young feel invincible, the heartbreaking loss of pets who loved unconditionally.

Life and death, death and life. The conversation slides easily back and forth between the two.

Live fully, says Trapasso. Why have regrets? She's known many a dying person who felt smothered by them.

They gave her advice.

And don't let anyone stop you from living the life you want.

For more than an hour, Fisher's husband, Ron, stays silent — until someone addresses him directly.

The way we die is about to change, Burzynski says. He's convinced of it.

As an LAPD sergeant, he must see death all the time. How was he trained to deal with it?

He wasn't, he replies, unless you count learning "to fill out information in boxes" on a death report.

And then he starts talking — about death that comes violently, about wishing he knew how to help the ones left behind, how to console without internalizing the pain so much "that I start turning into a glob of goo."

One day in East L.A., a big rig was waiting at a light. The light turned green. The truck moved forward.

The driver was too high up to see the lady crossing against the signal, pushing her grandson in a cart.

She tried to shove the boy out of the way. The cart fell under the truck's front wheel.

She was unhurt. Her grandson was crushed.

Fisher and other officers held up sheets to shield the view from the public as the coroner removed what remained of the child.

"So there's that image ingrained in your head forever," he says. "How do you deal with that?"

"Well, I think you're doing it right now," says Richard Riemer, a psychologist, as other call out, "Yes," "Yes, you are."

Death can come suddenly. Dwelling on it can seem dark.

But it's still bright out when L.A.'s first Death Cafe winds down after more than two hours.

They start to leave, making their way down the stairs.

The leaves rustle, the air feels fresh and there is life to be lived.