The 30th Los Angeles Marathon began extra early on an unseasonably hot morning, but temperatures did not climb quite as high as some feared. Kenyan runners earned the fastest times, some participants gutted it out while wearing whimsical outfits, and firefighters used their hoses to spray down the pack. For images and insights from Times staffers, read on.

The L.A. Marathon is wrapping up, and we’re feeling accomplished but exhausted. For the latest updates, visit The Times’ full coverage page . For details and scenes from the day, plus some context and marathon history, just scroll down.

See how your time stacks up

Even if you didn’t run today, you can enjoy some marathon competition with The Times’ interactive graphic.

Enter your mile pace or marathon time (and, if you’d like, find your friends’ times on the L.A. Marathon website) and see how you stack up against people you know, previous runners and some unexpected participants.

31 patients now said to be at hospitals

Officials are now saying 31 patients have been taken to hospitals during the L.A. marathon.

All were said to be in stable condition.

As of 2 p.m., 87 patients had been treated by medical personnel along the course. Specific information about their injuries or illnesses was not available.

For the record, 3:52 p.m.: The first version of this post said 54 patients were taken to hospitals and 81 treated along the course. Officials have since corrected those figures.

Number of people hospitalized now up to 24

Emergency officials along the L.A. Marathon course now say 24 people have been taken to local hospitals, and all remain in stable condition.

Paramedics had treated 67 people as of 1 p.m.

Earlier on Sunday, a 61-year-old man went into cardiac arrest on San Vincente Boulevard, near the 22-mile mark of the course.

Emergency personnel said he regained a pulse immediately, and was conscious when he was taken to a local hospital.

The man was not identified.

No one was arrested during the marathon, according to the Los Angeles Police Department, and officers did not report any other incidents.

Where to eat along the route 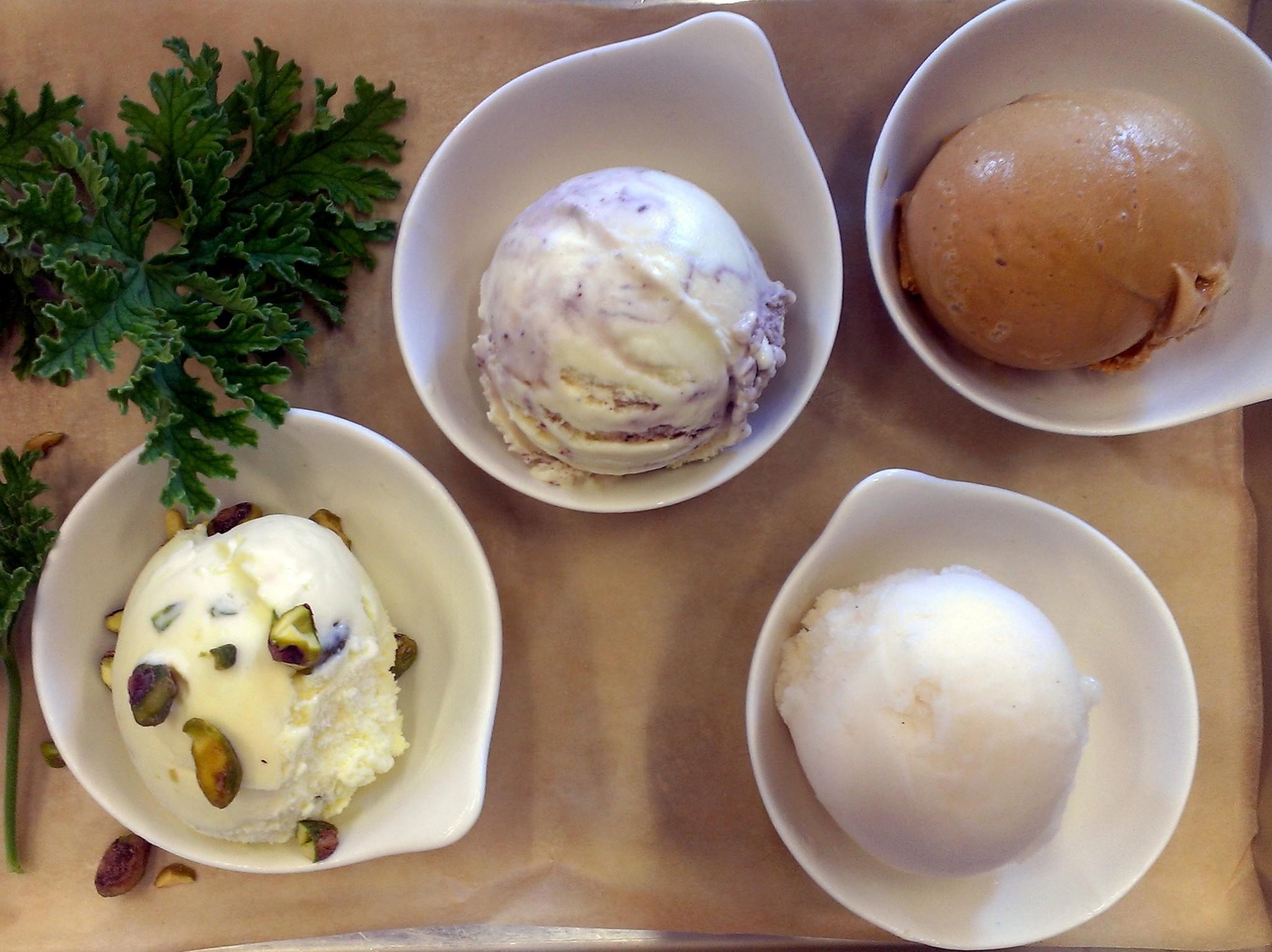 Streets are largely open again along the marathon route, so it’s a fine time to cap off the event by grabbing a bite to eat nearby.

The Times has put together an interactive map of recommendations such as Sweet Rose Creamery in Santa Monica, above.

Marathon participants who take more than 6 hours and 30 minutes to complete the course are not guaranteed medals or official finisher status. For the first waves of runners, that time has already passed.

Sara Hall says she was slowed by cramps

The high temperatures in Los Angeles on Sunday greatly affected one of the favorites on the women’s side of the race.

Hall finished the race, her first marathon, in 2:48:02, 14 minutes off the pace of eventual champion Olga Kimaiyo.

Hall’s husband, Ryan, also struggled on Sunday, pulling up lame near the 13-mile mark along the Sunset Strip.

It was unclear why Ryan Hall, who was with the lead pack through the first five miles, was unable to finish.

15 patients hospitalized, one man in cardiac arrest during L.A. Marathon

Paramedics have treated 47 patients, including a man who went into cardiac arrest, as runners continue to trudge through increasingly stifling conditions along the L.A. Marathon route.

A 61-year-old man went into cardiac arrest along San Vicente Boulevard, around the 22-mile mark of the 26.2-mile course, but paramedics were able to revive him, officials said.

As of noon, 15 runners had been taken to local hospitals in stable condition.

Earlier Sunday, a Los Angeles Fire Department spokesman said specific descriptions of injuries and illnesses suffered by the 47 patients were not immediately available.

As of 1 p.m., six hours after the first runners departed from Dodger Stadium, city workers had begun clearing barricades and other fanfare from the early portions of the marathon route.

Streets that were closed to traffic along the first 18 miles of the marathon course have now been reopened, according to the LAPD.

Marathons happen all over the world, but stretches of this route have very distinctive backdrops.

At the finish line, sweet relief

Some runners are flagging

In Westwood, this man’s feelings are on display.

Closer to mile 18, The Times’ Kathy M.Y. Pyon is hanging in there, but she took time to hashtag “whatamithinking.”

At a medical tent just past mile 20 on Santa Monica Boulevard, more than a dozen volunteers in red shirts attended to the hobbled, exhausted and achy. One after another, runners popped into the tent, unplugged their headphones and fell limp into a folding chair or flat onto the grass.

Maria Maldonado, a physician assistant with USC’s Keck School of Medicine, said she had seen people suffering from muscle cramps Sunday -- but not at a higher rate than when she volunteered at the same tent during the 2013 race.

“It’s hard to say if it’s related to the weather. It’s probably a combined effect,” she said.

“If (heat) was a factor, she said, “it’s been handled very smoothly.”

Nearby, Kobie Gordon, 25, leaned against a post to stretch his legs. His neon green socks were packed with ice for his calves.

“I started cramping on mile 16,” the dental school student said. “I think it might have been the heat. I got dehydrated a little faster. ... I should have slowed down.”

At a separate tent near San Vicente Boulevard, runners Sandy Triana and Judy Campos grabbed fistfuls of ice as they took a quick breather.

The slower pace was necessary though, both said, if they were going to reach the finish line as the temperature rose around noon.

Kristina Tudor stood out from the throngs of runners wearing tank tops and sneakers who traversed the L.A. Marathon’s sprawling course on Sunday.

Decked out in full-length police blues and displaying her badge proudly, the Los Angeles police officer was running to raise money for other officers who have been killed in the line of duty.

Several officers, also in full patrol attire, joined her on the run for miles at a time.

“Your quest to the #finishline inspires all of us!” tweeted Police Chief Charlie Beck.

As runners turned the corner onto Sepulveda Boulevard near the 405 Freeway in west Los Angeles they were met by the cooling mist of a fire hose.

Around 10 a.m., firefighters with Engine 93 plugged a fire hose into a hydrant and let the water rip on runners.

As competitors walked and jogged by, some turned and opened their arms to the spray, hooting and hollering as they passed through.

“They love this,” said firefighter Bryce Gutierrez, as he waved his hose up and down. “Some people have just come and stood here in front of the spray.”

Standing nearby, LAFD Capt. Ray Robles said there had been “several incidents” related to heat and the general strain of the race, but he could not estimate how many and said there did not appear to be any more problems than a typical year.

“I think the cloud cover has helped,” he said. “I don’t think the heat has been as bad as we thought it could be.”

As of 9:15 a.m., emergency services officials said 18 runners had been treated for undisclosed reasons. Six were hospitalized in stable condition. 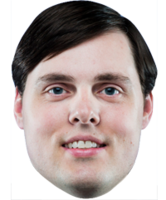 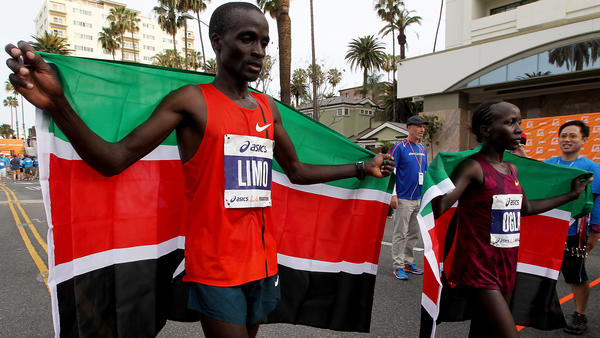 Kenya’s dominance of the marathon has continued for another year.

Daniel Limo’s triumph in the men’s race marks the 14th win in 16 years for a Kenyan runner.

Four of the top-five runners who finished Sunday were from Kenya.

Perhaps the biggest surprise of the race was Ryan Hall’s abandonment. Hall was running strong before dropping out near the midway point on the course.

Another surprise was Blake Russell capturing the USA Track and Field women’s title. At 39, Russell wasn’t a favorite to win. She hadn’t finished a marathon since the 2008 Olympics.

How hot was it during L.A. Marathon? One runner made sure everyone knew

Ray Ontiveros wore a giant circular temperature gauge on his back as he scaled Sunset Boulevard. He had just passed the 13-mile mark at Fairfax at 10:30 am.

This is his 10th full marathon, he said, and he’s been running for three years. His reason for participating is simple.

Ontiveros, who lives in Anaheim, said he decided to wear the thermometer after hearing reports that Sunday’s marathon might be the hottest in race history.

But the forecast may have been a bit overblown, he said, and with the thermometer at the ready, he can obviously prove it.

Thousands of Angelenos turned out along the L.A. Marathon route to cheer on the runners who chose to test their endurance on Sunday.

Some of their motivational tactics were a little more creative than others ... including this guy, who hoped the promise of cake frosting and a frosty brew might spur some runners along.

Daniel Limo said there was a moment when he knew he would win L.A. Marathon

As he pounded the pavement around the halfway point of the L.A. Marathon, eventual champion Daniel Limo wondered if he’d have to settle for second place.

Speaking at a news conference after he crossed the finish line in Santa Monica, the 31-year-old Kenyan said he doubted he would catch up to Edwin Koech.

Then he caught sight of the lead runner.

Why are Kenyans so good at marathons?

A 2013 study found that, contrary to previous theories, it comes down to the low BMIs common among the Rift Valley people.

“The kids are really, really skinny. Which might be one of the reasons they are also so fast in endurance races... For decades, many observers of the Kenyan success story have guessed that Rift Valley runners are dominant in distance races because they spend their childhood ‘training’ by running/walking to school and working in the fields.”

As he jogged down Santa Monica Boulevard, David Moore, 59, slapped the hand of a cheering volunteer and grinned.

The Moorpark resident was running his 23rd marathon Sunday, helping to pace a longtime friend a few steps behind him to a time under four hours. He said he was pleasantly surprised by the heat -- or lack thereof.

He said he plans to run the Boston Marathon for an eighth time in April, about a week before he runs another marathon in Big Sur.

“The coolest part about the L.A. Marathon is the course. You go through Chinatown, Hollywood and you end up at the beach,” he said “It’s just perfect.”

On the flats of Santa Monica Boulevard

Steve Clow, one of our California editors, reports that the heat is “not so terrible” but then again...