Hitting the MOOCs instead of the books

A reporter joins communal strangers in the emerging universe of massive open online courses, or MOOCs. For this class, there’s no need to hustle for a decent seat or line up at the bookstore. 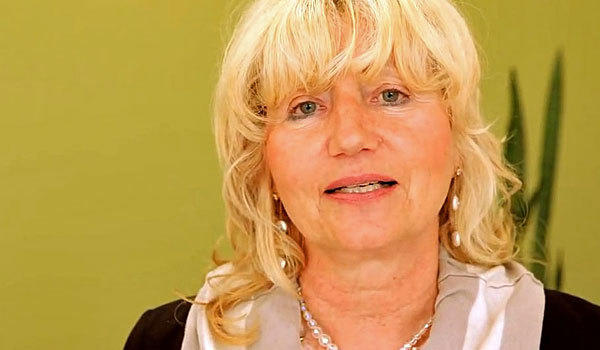 Hitting the MOOCs instead of the books

A reporter joins communal strangers in the emerging universe of massive open online courses, or MOOCs. There's no need to hustle for a decent seat or line up at the bookstore.

The public health class got ready for its first lecture: Attending were the pharmacist from Pakistan, the psychologist from Brazil, the dietitian from Louisiana, the journalist from Los Angeles — and 4,500 other people.

It's a good thing we didn't have to hustle for a decent seat. This classroom was a virtual one.

We communal strangers were among the pioneers in the emerging universe of massive open online courses — MOOCs, as they're called, an acronym that sounds like an insult from my New Jersey childhood.

Instead of lining up at the bookstore, I was fiddling with Internet browsers and deciding how many videos about tuberculosis and droughts I could watch in one late-night stretch. Instead of chatting across the aisle with classmates, I posted group messages online. And rather than gathering nervously en masse for our final exam, we tested in uncertain solitude, at kitchen tables and office cubicles.

I'd chosen professor Zuzana Bic's free five-week Principles of Public Health from UC Irvine because I was interested in the topics and wanted a relatively short class based at a Southern California campus.

It was offered through Coursera, a for-profit organization founded by two Stanford University professors. Individual universities develop no-tuition online courses for that group and, in most cases, don't offer college credit. For-fee arrangements are afoot to earn special completion certificates and possibly degree credit, with exams proctored via webcams.

Advocates say the MOOCs will reduce costs and widen access to education, but skeptics question the quality of learning and the potential for cheating.

'Remember to smile!' is a common sign-off

Taped in front of a live UC Irvine class

I experienced both the very good — an enthusiastic teacher and the ability to watch her classes on my own schedule — and not so great: the lack of human contact and supervision. And the slightly unnerving: writing assignments that were graded by other students and politely titled "peer assessments."

Still, I met my modest goal: to emerge without embarrassing myself.

But first, I needed help to get rid of the pop-up blockers that interfered with the class.

Soon enough, I was listening to Bic welcome me in her charming Czech accent and sometimes amusingly fractured English. Even on video, she's a warm figure who urges students to take care of their own health, frequently reminding us to eat well, get enough sleep and exercise, and maintain a positive outlook on life.

"Remember to smile!" is her frequent sign-off line.

Her lectures, videotaped in front of an actual UC Irvine class last fall, were divided into small segments usually ranging between three and 25 minutes long, totaling about three hours a week. Guest speakers and documentary videos could add an hour more a week.

I needed an additional hour or two for online readings and sifting through the class discussion posts, plus extra time to write a research project, study and take quizzes and the final exam. (I probably over-researched; experience as a newspaper reporter provides tail wind to re-enter term-paper life but makes you ever paranoid about errors.)

A 21st century wrinkle: The videos could be adjusted for speed. Students for whom English is a second language slowed lectures and displayed English subtitles. I wanted to move faster and usually settled on 1.25 speed. I retroactively fantasized about the ability to go warp racing through the droning of my freshman year philosophy professor.

Sometimes I watched the public health videos using earphones at my desk in the newsroom, surrounded by colleagues chasing stories about a murderous ex-cop or an approaching mayoral election. Some nights and weekends, I was in my home office, where I occasionally would stand during the video lectures and do stretches, sort of like watching a music video while on a stair climber at the gym.

I wondered if that was disrespectful and whether the round-the-clock accessibility of online education diminishes the seriousness of learning. Or was that an elitist concern, compared to the benefit of reaching thousands of people who can't travel to a university, let alone afford the education?

Bic, an engaging lecturer, usually appeared in the left third of the screen with the rest filled by her slides and charts about epidemics, pollution and hospitalization rates. She often was shown behind a lectern and in front of a wall containing only a power outlet and a telephone, a background that got very boring. Sometimes you could see the back of the heads of the real UC Irvine students and hear discussions you couldn't join. (One young woman hogged many questions, creating a new annoying stereotype: the Internet class kiss-up.)

When it came to the weekly quizzes, I was a bit arrogant and didn't study for the first one. The 10 multiple-choice questions were somewhat difficult even without a time limit. I got only seven right the first try, according to the instantaneous and automated grading. This Coursera system showed which answers were wrong and allowed a second try that shuffled the possible answers. I got eight correct on an immediate retake.

The next day I discovered that the quiz deadline had been 11 p.m., and since I hadn't finished until 11:19 p.m., my grade was reduced to a 7.6 as a penalty. Bummer. Note to self: Pay better attention, and prepare. 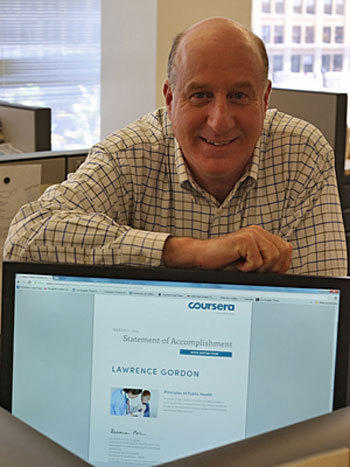 I explored the online discussions among a couple hundred of my virtual classmates. People wrote about the suspicion of vaccines in Russia, the shortages of nurses in Egypt, and teen pregnancy in Latin America, often in not the best English but with great detail and passion.

In one posting, a classmate who already had taken the next quiz inadvertently tipped us off that a question would be about omega-3 fatty acid. Another student urged an end to the online chatter until after the quiz deadline "to provide a level playing field for all." I agreed.

To deter cheating on the tests, students were required to check a box next to an honor code certifying "that my answers here are my own work." But there was no real control over thousands of students taking exams over several days and time zones. I fought back the urge to peek at my notes during tests. Then, I started to think that in the Internet age, exposure to knowledge and synthesizing it might be more important than the traditional memorization I grew up with.

For the next quiz, I thoroughly reviewed Bic's slides and my notes. I misread one question and got it wrong. I took the quiz again and received a perfect score. Bingo! (And that pretty much was my record for the next three quizzes.)

But I was getting lonely in my Coursera universe. I didn't have that shared trauma or triumph after a big test, nor could I see who is flirting with whom, who seems to have a hangover. And I miss being seen by anybody except an automated counter of "unique visitors." Of course, I don't want anyone to see me when I'm in my pajamas watching lectures.

I drove to UC Irvine to meet Bic. After seeing her in the videos, it was like meeting a movie star in person. We discussed the challenges of leading an online class for enough students, she quips, to fill a stadium back in Prague. Even with steep attrition, from about 16,000 who originally signaled their intent to enroll to 2,100 for the final exam, the numbers, she said, are "amazing, unbelievable."

Although she can't respond individually to questions from students, she said she thinks the experiment is working.

The UC Irvine staff, at my request, posted a notice asking interested students to contact me. A dozen did, among them Ignacio Luri, a 26-year-old university graduate and resident of Spain's Canary Islands. He works in food industry marketing and wants to switch to social marketing in public health.

I spent about eight hours reading, writing and transferring my material into the online boxes that freeze when you've exceeded the maximum length.

In comparing online and classroom learning, he noted that UC Irvine students in the videos had the advantage of meeting Bic and one another, "which is great." But he couldn't schedule in a regular college course, and Coursera allowed him to take the class in the evenings and on weekends: "Of course it's still time-consuming, but I think an online course (at least this one) is very efficient."

In week three, the writing project requirements were posted: With scholarly citations, analyze a specific health problem and, in several essays of no more than 250 words each, put it in international context, and detail the risks and efforts to combat it. (I felt a cyber-groan across anxious Internet postings.)

Inspired in part by Los Angeles Times columnist Steve Lopez's book "The Soloist," I chose to research issues about the homeless mentally ill. On the Web, I found surveys from London, medical trials from Baltimore, newspaper accounts from India, reviews of programs on L.A.'s skid row. I spent about eight hours reading, writing and transferring my material into the online boxes that freeze when you've exceeded the maximum length.

The next step was the peer assessment: Other students judge your work, mainly through a drop-down menu listing responses and point awards. I had to read five students' essays assigned through the computer program, and my work was read by five.

The essays I graded — on such topics as pollution in Mexico and child mortality in Rwanda — mainly showed solid research and concern, although with mistakes in English grammar and spelling; only one seemed thinly researched, and how could I spot fabrication anyway?

With a maximum of 50 points, I awarded grades ranging from 35 to 47. In retrospect, was I too lenient? Later I was pleased to receive a 46 average; the main criticism was that I didn't include enough non-U.S. statistics, a valid point.

Finally, it was time for the final exam of 50 multiple-choice and true/false questions. I studied for about 90 minutes, and got 46 answers correct the first time. Since two of my wrong answers were true-false, fixing it on the retake was a laughable no-brainer. My second score was 49 and I stopped there.

Combined with my other work, I'm eligible for a completion certificate, along with 1,253 others whose combination of grades averaged at least 70%. (The 8% success rate based on the original 16,000 enrollees is close to the average for most other MOOCs.)

I learned a decent amount and am also trying to change my diet and exercise habits after lectures focused my attention on my high genetic risk for diabetes. MOOCs can educate people far afield from the professor's campus and be a boon to people who don't care about a formal degree. But is the learning deep enough for a diploma?

Maybe, like sweets and soda in my new diet, this style of online education should be the occasional snack, not the entire meal.