The wrestlers on the Panorama High girls’ team have broken into a male-dominated sport that doesn’t fully welcome them. They’re breaking up old notions of femininity &#8212; in their school, and in their families. 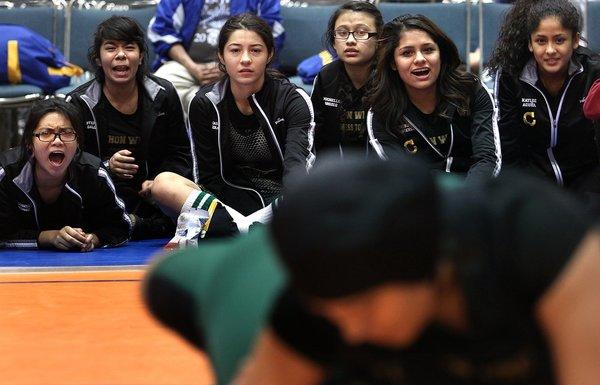 Wrestlers on the Panorama High School girls' team watch a teammate during a tournament at the L.A. Convention Center. More photos

The wrestlers on the Panorama High girls' team have broken into a male-dominated sport that doesn't fully welcome them. They're breaking up old notions of femininity — in their school, and in their families.

By Stephen Ceasar, Los Angeles Times
Photography by Christina House, For The Times

Suddenly, the DJ cranked a bass-heavy beat, and a group of girls came strolling out. Coach Abby Herrera told the students there had never been an all-girls high school wrestling squad in Los Angeles, but this season, a group of students from Panorama was changing that.

"At 98 pounds," the coach announced. "The Beast: Coellet Rangel." The wrestler, who doubles as a cheerleader, flashed a quick smile and bowed playfully. Then the game face returned.

For most teenage girls, having their weight on display in front of their classmates is a nightmare scenario. But these young women have proven to be braver than your average teen.

They've broken into a male-dominated sport that doesn't fully welcome them. And they're trying to transcend old notions of femininity — within their school, their families and themselves.

Wrestling mats stretch from wall to wall in the converted classroom. Orange beams of sunlight enter through tiny windows that seal in the smell of sweat.

The girls pair off and grapple. Coellet grabs Kaylee Acuña's neck and yanks downward, torpedoing herself into Kaylee's abdomen, lifting her like a rag doll and slamming her sideways into the mat. They both rise, pause, then switch roles, Kaylee now the aggressor. 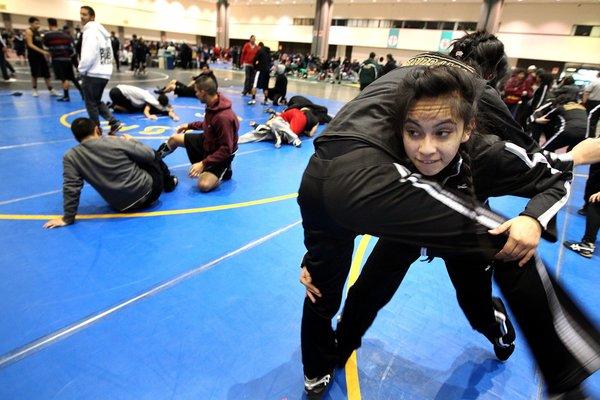 The room is mostly quiet except for the occasional grunt of pain, the thump of backs hitting the mat and the rapid-fire advice of assistant coach Richard Ramos.

The physicality of the sport has whittled away at the team's numbers. They began with 30 girls, and ended up with less than half. Some couldn't hack it, Herrera said. But others never got a chance to try. Their mothers wouldn't let them.

Moms have marched into the wrestling room and removed their daughters. Girls, they believe, shouldn't play sports — let alone one like wrestling. It is barbaric, not ladylike, Herrera said they tell her.

They're keeping them in that bubble that we're trying to break out.... She can have children, clean the house — but she can't wrestle?"

It's a reflection of the school's community: Latino and Asian families, some of whom have steadfast traditional views of gender roles, Herrera said.

"It's moms not realizing that their daughters have the ability, the strength, the endurance to do this," she said. "They're keeping them in that bubble that we're trying to break out.... She can have children, clean the house — but she can't wrestle?"

Seconds after being thrown to the ground and tweaking her back, Coellet walked gingerly toward a teammate after practice.

"Do you have a brush?" she asked. The girl tossed one to her and Coellet trotted off to the bathroom to fix her hair.

They reveled in each other's bruises, while gossiping about prom. They passed out pink Hello Kitty Band-Aids to cover scrapes on their knees. They wove their matted hair into French braids.

Diana Oliva, one of the team's captains, listened to the boy band One Direction in one corner. Micah finished up some homework and then practiced her violin in another.

A few minutes later, the girls prepared to weigh in. They had a match that night.

Though gaining in numbers, only about 3% of high school wrestlers are girls — about 8,000 nationwide in 2012.

At Panorama, a few girls participated on the boys' team, but Herrera thought they'd do better on their own.

Betting she could convince enough girls, Herrera floated the idea of an all-girl team to administrators last year. To her surprise, they gave the go-ahead.

That sort of support isn't the norm, said Ramos, who helped coach his daughter on a boys' team in high school. She now wrestles on the women's team at Missouri Baptist University.

"There are still men out there that think women don't belong on the mat," he said.

Coellet always enjoyed watching the sport, but never thought of giving it a try herself. She didn't think she had the aggression needed to attack opponents, overpower them and cause pain to the point of submission.

On a recent afternoon, Coellet sat at the front of her American Literature class, wearing jeans and her black wrestling singlet as a tank top. 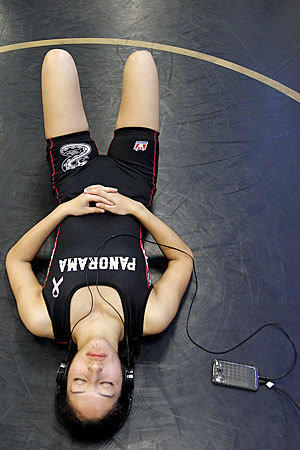 Her teacher lectured on the writings of Ralph Waldo Emerson — a champion of individualism. Emerson, the teacher said, argued that people shouldn't cave to societal pressures but instead search for, and follow, their own truth.

"So, according to Emerson," the teacher asked the class, "whose rules should you really follow?"

"Your own," Coellet chirped. She flipped her hair, revealing two words emblazoned across the back of her singlet: Chick Wrestler.

Micah's mother thought she was at a tutoring session. She was on the mat.

Within seconds, the heavyweight had pinned her opponent and the referee raised her hand to signify the win. She scurried to the locker room, emerging minutes later wearing her school clothes and lugging a backpack and violin. She hung around for a few moments, said goodbye to her coaches and sprinted outside.

She knew her mother was waiting in the parking lot — ostensibly to pick her up from the tutoring. Wrestling isn't allowed.

She had tried out for the basketball team, but didn't make the cut. She gave water polo a shot, but that didn't work out. Neither did volleyball.

Then, she walked into the wrestling room and asked Herrera if she could try out.

"Sweetie. If you commit, you will be part of this team," Herrera told her.

Micah initially had her mother's blessing to join the team — sort of. "She said yes because she didn't think I would last very long," she said.

But Micah kept with it, and when her mother saw no end in sight, she told her to quit. Wrestling isn't for girls. You're not athletic enough. Besides, the family needs you at home, her mother told her.

Micah crafted stories of after-school tutoring and field trips. She would sneak her gear to school, days before matches, to avoid any suspicion.

At first, she lost almost every match. Slowly, she started to pick up speed and endurance. And she began to dominate.

Micah weighed about 250 pounds before joining the team. A couple months later, she's down to 225. "I'm the heavyweight. I'm not thin like most of the other girls," she said. "But I'm as fit as they are."

As her skills and confidence grew, so did her guilt. She loved wrestling, but hated lying to her mom.

A match against a rival team would be the touchstone. If she won, she told herself, she would continue wrestling. If she lost, she would give it up. Maybe the sport wasn't for her. She'd obey her mother's wishes and quit.

First was Micah, who grappled on the floor with her opponent for a while before nimbly hopping over her and pinning her. A few minutes later, Coellet leaped into Herrera's arms after besting her opponent.

As Coellet celebrated, Micah stepped wobbly atop the medal stand, her legs nearly giving out from nerves and exhaustion. She beamed bashfully.

Her eyes scanned the crowd. She looked for family she knew wasn't there. 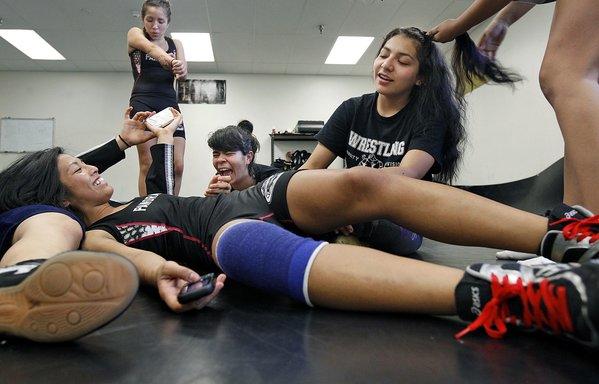 Instead, she gazed toward her teammates in the crowd — who chanted her name.

Then things turned south. San Fernando High, which created its own girls' team after Panorama, began racking up wins. As the afternoon wore on, neither team knew who led in points.

After the last match of the day, officials huddled, tabulating scores. The wrestlers locked arms and, in a rare few moments of silence for 14 teenage girls, awaited their fate.

A voice boomed over a loudspeaker, "In second place, San Fernando..." The words took half a second to land, then the Panorama Pythons erupted in shrieks. The San Fernando team fell silent and tearful.

As the crowd began filing out, the champions began rolling up the mat where they had just earned their crown.

A few days later, Micah told her mother the truth. The city champion was promptly grounded.

Myanmar's film industry a flicker of its former self

Tales of a teenage ballpark rat