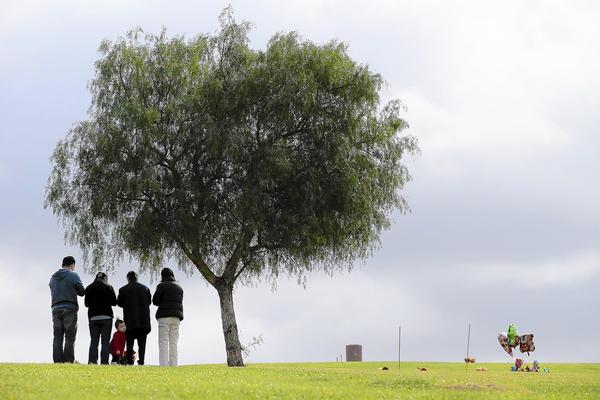 Three generations of the Tsai family pray over the grave of Wei Tsai at Rose Hills Memorial Park in Whittier. Even with prices rising, the cemetery sold 4,500 burial spaces to Chinese customers last year — more than half of its total annual sales. More photos

Bruce Lazenby remembers the spring morning when the management staff of Rose Hills Memorial Park in Whittier gathered in a boardroom, baffled by the events of the weekend.

In two days, the cemetery had seen Dodger Stadium-size crowds of Chinese mourners. Their cars backed up traffic for miles. Every trash can overflowed, and at many of the graves, people had laid out a confusing feast: fruits, vegetables, entire dishes on disposable plates wrapped in plastic.

The staff later learned that the crowds were celebrating the Qingming Festival, a Chinese holiday on which families tend the graves of relatives and leave food offerings.

Lazenby, the cemetery's executive director, said that weekend in 1991 was a wake-up call.

"At that point, we began to realize how important our Chinese business was," he said.

But in the 1980s, waves of Chinese immigrants poured into the San Gabriel Valley and the cemetery found itself at the center of the largest Chinese diaspora in the country.

The 1,400-acre cemetery, so large that mourners need maps and cars to get around, began a massive transformation to compete for an increasingly lucrative Chinese funeral business that has seen some family "estates" go for six figures.

Since 1991, it increased the size of the Chinese-speaking staff by nearly seven times, to 160. Executives learned about Chinese astrology and stepped up construction of feng shui amenities. Salesmen built relationships with feng shui masters.

The cemetery became part business, part cultural advisor. For Chinese immigrant families, burying relatives in America means putting down roots. But after years of assimilation, some struggle to remember the old rituals.

"Sometimes they know what to do, sometimes they don't," said Kear Theng Ly, a pre-planning advisor at the cemetery. "We help them figure it out." 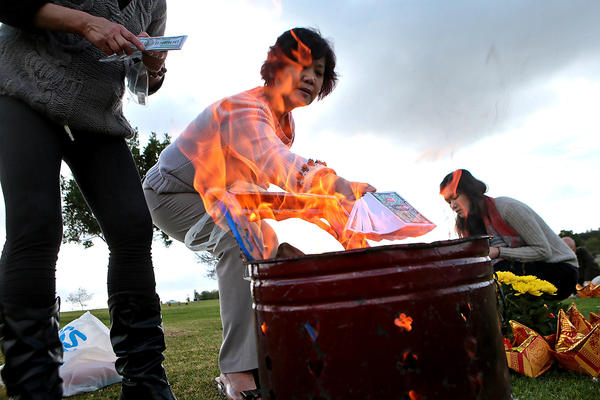 Deedee Xu burns a stack of fake money as she, her sister, Lili Xu, left, and daughter Jessica Wu honor a deceased relative at Rose Hills. Few cemeteries have bet as much on Chinese customers as the Whittier cemetery. More photos

Michael Liu hefted two sloshing buckets of water and trod carefully to his grandmother's grave, stepping around the headstones to avoid bad luck.

The three months since his grandmother's death have been consumed by a daunting review of old Chinese funeral traditions. Over a mourning period of 100 days, elaborate and exacting customs reach into every sphere of life. Different rites must be performed at the grave site every seven days for the first seven weeks. Some traditions demand a vegetarian diet, while others decree that all mirrors be removed from homes.

Sometimes it's as simple as green grass at your grandmother's grave. His family takes turns watering, fertilizing and weeding.

His family was never strictly Buddhist, Liu said, "but there were certain things they had to make sure we followed."

His grandmother was the first relative to die in America, and every decision they made about her funeral set a precedent. They consulted a feng shui master to calculate the correct angle at which to bury the body. They referred to an almanac to identify the most elementally harmonious day for the funeral. Their grandmother had taken care of the rest — she bought a family plot at the cemetery 15 years ago for $1,500.

Since then, increased demand from Chinese buyers has driven up prices by 10 times, Liu said. Especially desirable properties are rumored to exchange hands aftermarket for even higher prices. 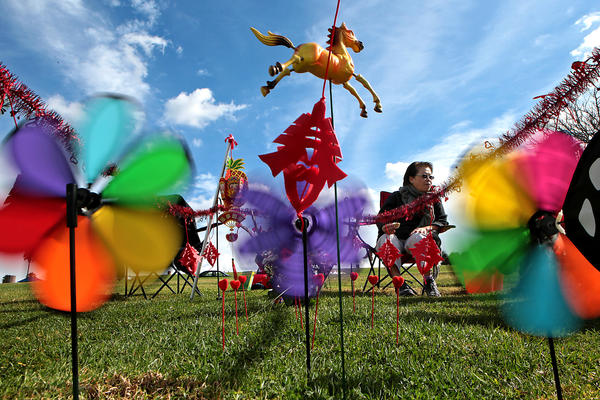 Lan Hsiu Liu's grave at Rose Hills Memorial Park in Whittier is festively decorated with symbols of the Chinese New Year, including sticky year cake, a cup of green tea and a plastic horse figurine, symbolizing the Year of the Horse. More photos

But few other cemeteries have bet as much on Chinese customers as Rose Hills.

Lazenby said 80% of the cemetery's remaining land will be developed as feng shui neighborhoods — specially designed areas with names such as Wall of Heaven and Pearl Terrace. The cemetery built walkways so that mourners wouldn't have to step on graves and risk bad luck. Grave sites are laid out in arcs instead of lines. Staff planted a peach tree as a symbol of immortality and sank a mosaic of a lotus flower into a wall, a symbol of prosperity.

The modifications complement what some masters say is the cemetery's natural feng shui.

Backed by a mountain and flanked by hills, the cemetery boasts a "protective" orientation in which the hills and mountain represent guardian animals such as tigers, roosters and dragons, said Lillian Pearl Bridges, a feng shui master and the cemetery's consultant. The cemetery also faces west; on a clear day, many of the plots offer views all the way to the Pacific Ocean.

Even with prices rising, the cemetery sold 4,500 burial spaces to Chinese customers last year — more than half of its total annual sales. 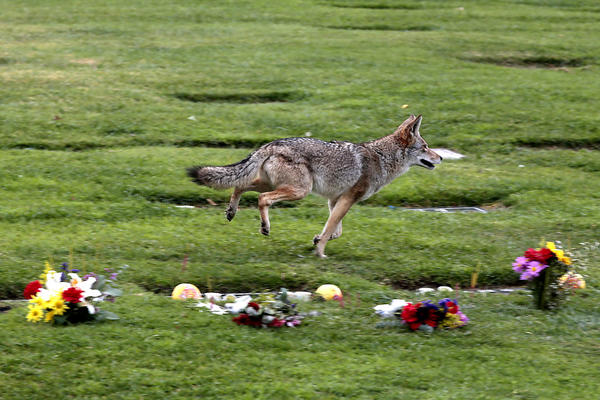 A bold coyote trots past food-laden graves at Rose Hills. Backed by a mountain and flanked by hills, the cemetery boasts a "protective" orientation in which the hills and mountain represent guardian animals such as tigers, roosters and dragons. More photos

The Liu family arranged canvas chairs in a loose circle around a headstone for their first Chinese New Year without their grandmother.

They used to celebrate with red envelopes full of money and feasts at their grandmother's house. Today, it was green tea in plastic cups and a Tupperware container of fried red bean cake at her grave.

As Liu watered the grass, Lily Liu, his aunt, began to scatter fertilizer.

For the last two months, family members have visited the grave at least three times a week. They know that Chinese tradition requires prayers to be said every seven days, but Liu says they come simply because they miss her.

Death tends to magnify the importance of tradition, even after generations of assimilation, said Karen Leonard, a professor at UC Irvine. "Birth and burial practices are anthropologically the ones people hold on to most strongly," she said.

But strict tradition cannot entirely control the shape of the Lius' grief. For their first Christmas without their grandmother, they erected a tiny Christmas tree behind a white picket fence festooned with strings of battery-powered lights. For the Chinese New Year, they had hung red paper cutouts of the Chinese character for spring.

He doesn't necessarily believe that hungry ghosts will follow him home from the cemetery if he doesn't make a stop first. The hills that surround the cemetery are pretty, but he doesn't see them as guardian dragons and tigers. 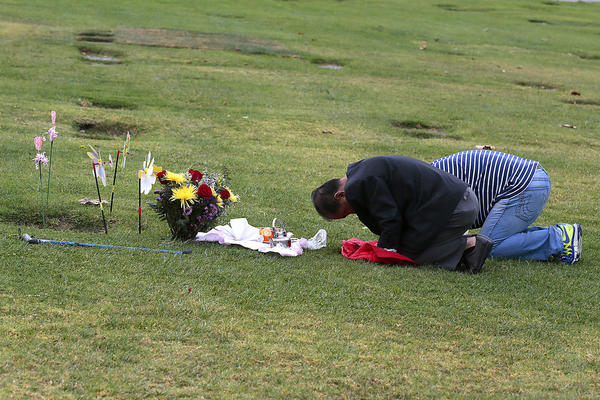 Jung Sook Kim, 86, prays at the grave of his mother with his son, Sung Kim. For Chinese immigrant families, burying relatives in America means putting down roots. But after years of assimilation, some struggle to remember the old rituals. More photos

In his life, feng shui manifests as scoldings from his aunt about the unlucky configuration of his bedroom furniture and the subpar qi, or life force, of his home in Monterey Park.

But Liu's parents divorced young, and his grandmother raised him. He visits his grandmother's grave every week — and he always makes a stop before heading home. Last year, after his grandmother died, he began to carry a paper charm from Hsi Lai Temple in his wallet for good luck.

"This is just the last thing that we can do for her," Liu said.

The end of the traditional 100-day mourning period symbolizes the departure of the dead person's spirit. A dozen members of the Liu family gathered on a Saturday morning in February to perform the last rites.

They set up a folding table with an altar and a feast of fried fish and golden pears. They lighted incense, bowed three times, then whispered their goodbyes. They thanked her for taking care of them, and promised to always remember her.

Liu was quiet. He made his own promise. 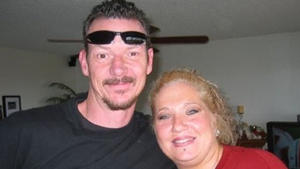 On the court, UCLA's Alford family is just coach, players 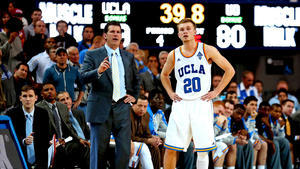 There are times when Dad does know best.” 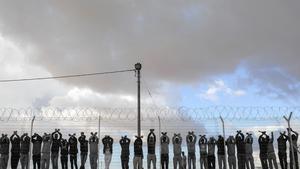 People look at you with eyes of hatred. You feel like a stranger.”