The Gangster Squad sets a trap for Mickey Cohen 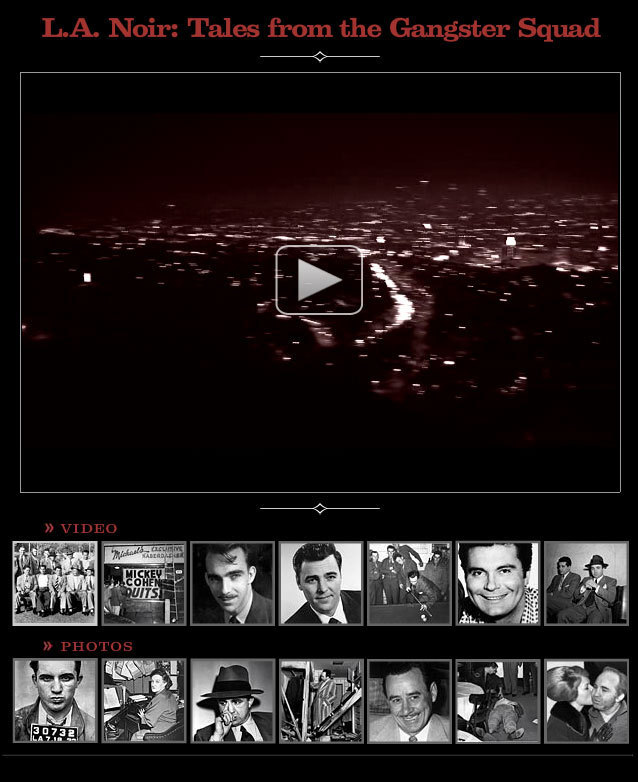 After the Two Tonys were shot dead and left slumped in their car in Hollywood, the LAPD prepared an internal report titled “GANGLAND KILLINGS, Los Angeles Area, 1900-1951.”

The survey went back to when fruit peddlers fought over turf and the Black Hand shook them down for a cut of the action. Police were certain who committed the first gangland killing, in 1906, but “strong man” Joe Ardizzone was acquitted when “no witnesses . . . would talk.” Ardizzone later made the list in a different capacity -- as a victim -- when he vanished in 1931 after leaving his Sunland vineyard to meet a cousin from Italy. No one was convicted in that case, either.

Even as the causes of underworld squabbles evolved over the decades -- from fruit carts to Prohibition liquor sales to control of illegal gambling -- there was one constant: how easy it was to get away with murder.

The “GANGLAND KILLINGS” report listed 57 over the first half of the 20th century. And one conviction. One. For the 1937 rub-out of Redondo Beach “gambling czar” Les Bruneman. And that case eventually unraveled.

What that left was half a century of gangland killings whose case summaries ended with “No prosecution” or the more optimistic “No prosecution to date.” Time and again, there was no overcoming the underworld’s code of silence, “omertà.”

So it was with the Aug. 6, 1951, slaughter of the Two Tonys, a pair of losers from Kansas City who had raised the ire of the mob hierarchy by robbing the cash room at Las Vegas’ Flamingo Hotel. “Wild-haired young bloods,” Mickey Cohen called them.

Anthony Brancato and Anthony Trombino had been spotted meeting in L.A. with another Kansas City import, Jimmy “the Weasel” Fratianno. Hours later, Trombino was about to light a cigar in the front seat of his Oldsmobile, with Brancato beside him, when someone in the back blew their brains out, just off Hollywood Boulevard.

Jimmy the Weasel had an alibi, of course -- he’d spent the evening in Burbank, at a fish fry at the Five O'Clock Club owned by Nicola “Nick” Licata. After Licata and 12 others dutifully backed Fratianno’s story, the cops tried to get a clerk at Schwab’s drugstore to say that a stogie found at the murder scene was a brand that Jimmy the Weasel favored, but she said no, that was too cheap. He was a 70-cent-cigar man.

Thus did the double killing become another “No prosecution to date.”

What you had to do, in Jack O'Mara’s job, was settle for whatever small victories you could manufacture.

That’s why the Gangster Squad sergeant volunteered to bring in Licata after the Two Tonys hit.

O'Mara didn’t expect a miracle -- there was no way a mob higher-up would turn on a loyal triggerman. But he gave a polite nod to Licata’s wife, allowed the man time to get his things and arranged for Licata’s son to visit him in the police lockup.

You had to wait for your opening, and for O'Mara it came the next time he showed up at the Licata home, part of yet another roust for a crime that would never be solved. By then, he was like family, the kindly cop, and Licata felt comfortable asking a favor: “Look, Mr. O'Mara, my wife she’s a-fixin’ me a nice chicken dinner. Before I go downtown. . . .”

The phone had a long cord so Licata could carry it into his private office. O'Mara carted it instead to the kitchen. Then he began to rummage, “looking,” he said, “for anything I could steal.”

That’s how he stumbled upon paperwork from a wedding. The couple were Licata’s son and the daughter of Black Bill Tocco, a Detroit Mafia boss who had a mansion with an 80-foot pool and knew how to stage a gala mob marriage. Many of the RSVPs had come back to the Licata home on Overland Drive.

“I got the phone and I’m watching him from the kitchen and I’m pulling out drawers, you know, taking the wedding invitations, and I shove them in my trench coat, you know. I’m bulging with all these RSVPs . . . all the goddamn Mafia in the country, see.”

You could call it petty theft -- O'Mara wouldn’t argue. But other law enforcement agencies had to settle for camping outside that Detroit wedding with cameras and binoculars, trying to figure out who was emerging from the limos. In L.A., the Gangster Squad didn’t have to rely on fuzzy photos to add names to files that now filled a wall of cabinets in City Hall.

Small victories, that was their reality. Like when Mickey Cohen finally went on trial in 1951.

For years, Los Angeles officials had lobbied the federal government, all the way to President Truman, to use the legal strategy that nailed Al Capone -- a tax case -- against the showboating L.A. mobster. A grand jury eventually collected evidence of how Mickey had paid a decorator $49,329 for work on his Brentwood home, spent $800 on shoes and handed out $600 in tips at one lavish affair. They’d let him try to explain how he lived like that thanks to $300,000 in “loans,” not income, from bookies and others. “If it’s against the law to borrow dough,” Mickey joked, “I’m guilty.”

But he never learned about some of the evidence authorities had -- documents gathered by one of the guards at his home, salvaged from a backyard incinerator. Mickey would take his papers out there to burn.

Neal Hawkins, a World War II munitions expert, had gotten hired onto Mickey’s security team thanks to some finagling by O'Mara. Hawkins would stamp out the fire and sneak the charred remnants to the Gangster Squad sergeant, who’d pass them to his bosses, who’d give them to the Feds.

Thus did they get the guilty verdict they wanted -- and Mickey got a five-year sentence for tax evasion. Before they led him off, Mickey handed his wife a roll of bills and his jewelry, gave her a kiss and pledged to appeal. “Right now, though,” he quipped, “I’m hungry.”

Five years had passed since the Gangster Squad was formed with the streets as its office. Two of the original eight had retired, including the first field leader, Willie Burns. Soon after, two more originals were gone, dead, in fact -- one in a car accident, the other a suicide.

There were no guarantees in police work, or life, but O'Mara hoped he’d still be around, and on the squad, when Mickey got out of prison. He wanted to see if another of his small victories paid off.

This too involved his mole Hawkins. Well before Mickey went off on his federally sponsored vacation, the guard had smuggled seven handguns out of his Brentwood house. Not exactly smuggled -- at O'Mara’s direction, the munitions expert had suggested to Mickey that his guns could use a checkup. Hawkins volunteered to take them into the wilderness to fire ‘em, clean ‘em and oil ‘em. Mickey loved the idea.

But Hawkins did not take the guns to the desert. He took them to the police range in West L.A., where O'Mara was waiting with an LAPD lab technician. Not surprisingly, none of the weapons was registered to Mickey. They recorded the serial numbers and fired test bullets from each.

O'Mara screwed off the butt plates and scratched initials into each gun, putting his own, “JOM,” in the first. Then he reattached the plates and Hawkins returned the cleaned guns to an appreciative Mickey.

At police headquarters, the list of hidden initials was locked in a safe in the office of the squad’s boss, Capt. James Hamilton. Only Chief William H. Parker and a few others were let in on the trap they’d set for Mickey.

While he was in prison, one of his henchmen would keep his arsenal. When he got out, he’d no doubt retrieve the guns that now could be traced to him. “I figured they might be recovered from a body someday,” O'Mara said.

If that happened, the LAPD might actually solve a gangland killing. It was a long shot, but some long shots pay off. O'Mara merely had to wait a decade, to the last days of the 1950s, to the night when Mickey and his crew sat waiting in Rondelli’s restaurant for Jack “the Enforcer” Whalen, the homegrown hoodlum who’d found a special friend on the Gangster Squad.