Two sisters open their home and hearts, agreeing to care for Arefa, an Afghan child who was sent to Los Angeles for medical care after being severely burned. The experience changes all three lives.

Two sisters open their home and hearts, agreeing to care for Arefa, an Afghan child who was sent to Los Angeles for medical care after being severely burned. The experience changes all three lives.

Two sisters agree to care for Arefa, an Afghan child who was sent to Los Angeles for medical care after being severely burned. The experience changes all three lives.

By Kurt Streeter
Photos and video by Barbara Davidson

Under the bright lights of a hospital room, the sisters sat next to a frightened little girl who barely acknowledged them. She kept her head down, eyes fixed to the floor. Arefa was 6. Much of her face and hands had been singed, and a cloth hid a head wound that had not healed since a fire raged through her family's tent. She'd flown in the day before from Kabul without her parents.

Jami Valentine and Staci Freeman watched as the doctor pulled back the sticky cloth. The stench intensified; the wound was severely infected. The surgery Arefa came for would have to wait. The infection made it too risky.

John Lorant, a plastic surgeon at Shriners Hospitals for Children in L.A., gave instructions and the sisters did as told. Staci held Arefa's hand. Jami put on gloves and then gently washed the wound that extended across the crown of the girl's head. Arefa cried and moaned.

"I need you to do this every night," Lorant said.

Jami and Staci were stunned to hear those words, they recalled.

"If you aren't able to do it, we're going to have to find someone who can," Lorant said.

Caring for Arefa had been Jami's idea. She paused, gathering her thoughts.

But deep down she questioned whether they really could. 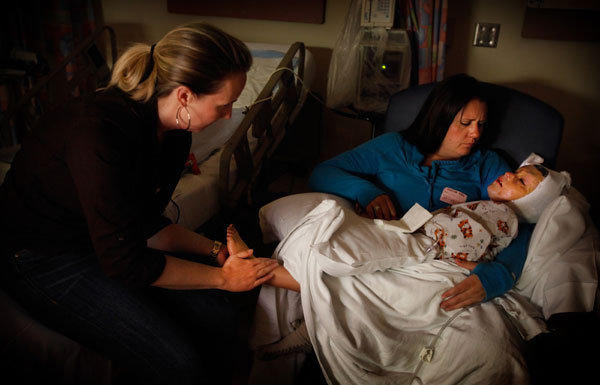 The sisters saw Arefa for the first time as she came down an escalator at Los Angeles International Airport. Tears streaked her pale face.

She looked so compact and fragile, thought Staci.

Arefa was one of several Afghan children brought to the United States by the humanitarian group Solace for the Children for medical treatment. The other children fanned across the terminal that June day to meet the families that would take them in. Not Arefa. She stood apart from the sisters, refusing to hold their hands.

She threw up in the car; when she got to the sisters' apartment in El Segundo, she collapsed on the floor, clawing at the carpet, sobbing.

At the hospital the next day, the sisters would learn that Arefa was malnourished. Even if there hadn't been an infection, the doctor said, she was too weak for surgery. The sisters needed to help her get her strength back. 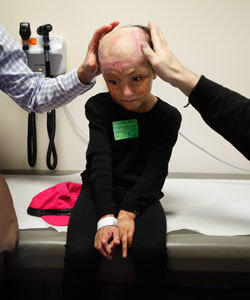 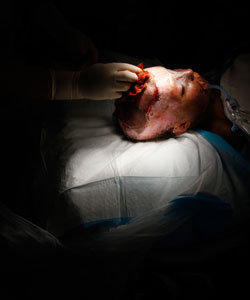 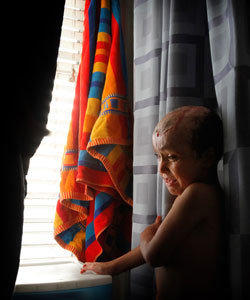 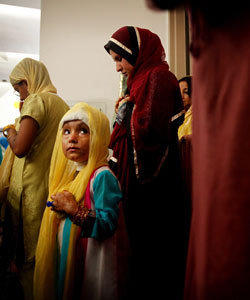 Top: A checkup in November. Second from top: Arefa cries softly as she anticipates having to take a bath. Third from top: An operating room surgical nurse applies a disinfectant to Arefa's skin graft. Bottom: Arefa attends services at a mosque with Jami Valentine, Staci Freeman and the Shinwari family.

They stuffed their refrigerator with the foods she liked: chicken, grapes, apples, peaches and strawberries. Arefa hated the taste of the protein shakes that supplemented her diet, so the sisters used a syringe to force the liquid down her throat.

Three years ago, the sisters had cared for an Afghan girl who needed an operation on her mouth, and their toughest task was making sure that after surgery she ate only soft food. Arefa was going to be more complicated.

They found communicating with her difficult because of the language barrier. Homemade flashcards helped — photos of a doctor or a little girl brushing her teeth, for instance.

Arefa soon settled into a routine. During the day, she spent hours at playgrounds, climbing ladders and barreling down slides, smiling. But back at the apartment, whenever the television flashed images of helicopters or men with guns, she grew tense.

At bedtime, when the sisters washed her scalp, Arefa wailed so loudly they worried someone in their apartment building might call the police. Almost every night, the little girl wet her bed and woke up screaming from nightmares.

It went on like this for weeks, with the sisters barely getting any sleep, praying they could ease Arefa's fear and earn her trust.

Then they took her to Disneyland. Arefa marveled at Mickey Mouse and rode the Autopia mini-cars. When the fireworks began, she craned her neck skyward, cooing.

"It was the first time we saw her experience what felt like pure joy," Jami said. "I remember her sitting on my lap, unusual because she often wouldn't come that close.... That night ... we'd made a connection. We got to mother her, spoil her."

Arefa gained weight and in late July, Lorant and his team decided to operate.

Lorant focused first on her forehead, loosening the scars that had kept her eyes from closing fully. He cut a football-sized layer of skin from her stomach and placed it atop her head, molding and snipping to create a proper fit. He sewed it on. Hair would never grow on that patch, but the scalp would be covered.

As they waited for the skin graft to heal, the sisters discovered that Arefa's emotional wounds were as deep as her physical wounds. The little girl was still throwing tantrums, often directed at Jami.

As a junior high math teacher, Jami, 34, had the summer off. Staci, 37, worked as a lab technician and had to rely on Jami to take Arefa to most of the doctor's visits. Arefa's relationship with Staci was less strained. She wasn't the one who had to set limits and say no.

Then school began and something changed. Unable to afford day care, Jami often took Arefa to work, putting her in the back of her class with coloring books. On the way home in Jami's Nissan, Arefa laughed as she used her hands and her limited English to mimic the students.

Jami began caring for Arefa as she would her own child, and she reflected on the uncertainties of the girl's life.

There was the past. Arefa, the daughter of nomads who lived in tents near the Pakistani border, was injured during the war. Her family, the narrative went, had been caught in a battle between Taliban and American troops; but not much could be confirmed.

There was the future. Arefa might not be welcomed when she was sent home. Her scars might limit her prospects in a country known for its harsh treatment of women.

The present was uncertain, too. In Los Angeles, the carefree moments were growing more common, but Arefa could fly into a rage — pounding her fists, kicking and scratching — in a flash.

Her going off to some other family, it was alluring. I could be free from the terrible tantrums.... But we’d also be losing someone we’d come to love. It would kill us."

"Two steps forward, one step back," Jami said. "We never seem to know when the step back is going to come, just that it always does."

She described these outbursts to a psychologist. Arefa has post-traumatic stress, same as a shell-shocked soldier, the therapist said.

The eventuality of Arefa's departure brought tension to the household. Dates were set and canceled. The sisters were caring for Arefa with no letup. They walked around with shoulders hunched from the strain. They were exhausted.

When Arefa's expected six-week stay stretched into five months, a Solace official in October offered to send the girl to a family in North Carolina. The sisters said no.

"Her going off to some other family, it was alluring," Jami said. "I could be free from the terrible tantrums, getting kicked by someone I was trying to help. But we'd also be losing someone we'd come to love. It would kill us."

Arefa had come to love the beach, Hollywood, McDonald's soft-serve ice cream, Target. Jami and Staci took her to a mosque, to their church and to the Manhattan Beach pier.

Everywhere Arefa went, people stared at her, but she usually ignored them.

In the apartment — two bedrooms, spartan, in El Segundo's industrial neighborhood — she'd hide behind a doorway, jump out and yell: "Surprise!" Her English was coming along. 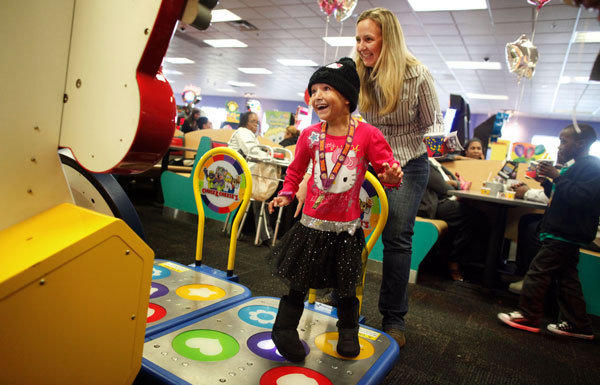 Arefa's birthday falls in January, but she asked Jami Valentine and Staci Freeman if she could celebrate with them in December to honor her seventh year. The sisters hosted a Hello Kitty party at Chuck E. Cheese's in her honor.

In November, four months after Arefa's surgery, Jami took her to see Lorant. The skin graft had healed.

"You can go home," he said. Arefa beamed.

She began tracking her time left. "Eight more sleeps!" she said, when there were eight days until her flight. Then she hugged Jami's leg and wouldn't let go.

The sisters were torn. They knew she had to return home, but what were they sending her back to?

"We've Americanized her, just being around us, living here as we do," Staci said, not long after giving Arefa a goodbye party at Chuck E. Cheese's. "She is a little girl who found her voice here."

She wondered whether Arefa's parents would be able to embrace that.

Jami and Staci couldn't count on getting answers. Once she was gone, the sisters knew they might never hear from her again.

Now it was a Wednesday, near Christmas. The sun was rising and Arefa's bags were stacked near the front door. She had a plane to catch. Her father was to meet her in Kabul. 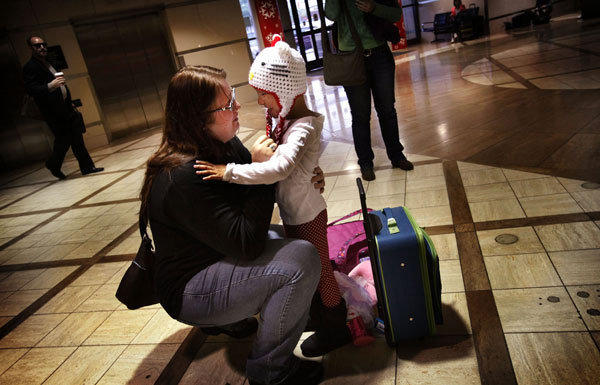 At the airport, Jami Valentine tries to hold back her own tears as Arefa cries during their goodbye.

Staci checked to make sure nothing would be left behind. Arefa sat on Jami's lap in the living room. She wore red-and-black polka dot pants, a white shirt, a white Hello Kitty cap.

"I love you so much, little girl," Jami said.

"More than the trees?" Arefa said.

For a few seconds, no one spoke.

"Big sad," Jami said. Both of them cried.