Antonio Villaraigosa has some downtime on the agenda, but no plans to fade away. A run for California governor is among the possibilities.

What's next for ex-Mayor Antonio Villaraigosa 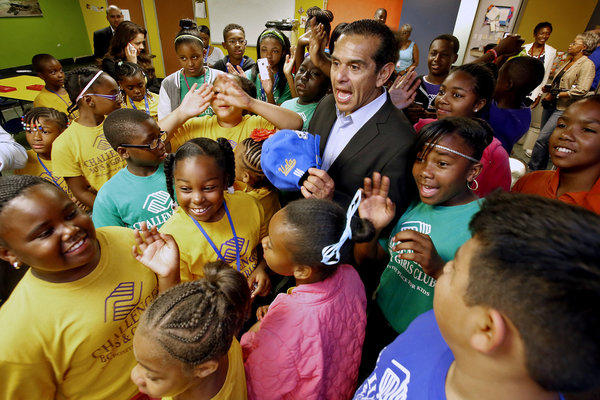 What's next for ex-Mayor Antonio Villaraigosa

L.A.'s former leader has some downtime on the agenda, but no plans to fade away. A run for California governor is among the possibilities.

After Antonio Villaraigosa clinked wine glasses with incoming L.A. Mayor Eric Garcetti at midnight on his last day in office, he left his City Hall office a man adrift.

Heading off to Martha's Vineyard for some downtime, he had only loose plans for a public speaking tour, a possible TV gig, an affiliation with a yet-to-be-named university or think tank, and a move from Getty House to Venice so he could be closer to the airport and the beach and walk everywhere in "jeans and tennies."

Whatever he does in the coming months and years is likely to serve two ends: maintaining a carefully cultivated national political profile and seeking to boost his credibility as a centrist Democrat willing to take on the party's traditional allies and orthodoxy.

Notably, he was a highly sought-after guest at former GOP presidential candidate Mitt Romney's recent gathering of his donors in Utah, winning favorable reviews for his speech on education and pension reform. There and at other political gatherings he is branding himself as a champion of what he calls the "radical middle" of American politics.

"It's broken on the right, and it's broken on the left," Villaraigosa said during an interview at City Hall. "I want to figure out how we put California and America back on track — how we bridge this partisan divide that is so polarizing."

He is mulling a run for governor once California Gov. Jerry Brown leaves office and — as preparation — is planning a "listening tour" that would take him across the state and nation.

By coincidence or calculation, Villaraigosa's repositioning — largely a product of the fiscal challenges he faced at City Hall — could help him draw support from the broad center of California voters, said Adam Mendelsohn, an advisor to former Republican Gov. Arnold Schwarzenegger.

"How he has moved to the middle over his time as mayor is going to be a big part of any success that he has going forward," Mendelsohn said. "There's a void on the right, and there are a significant number of people in the electorate who want a candidate who is a fiscal moderate."

Villaraigosa remains a deeply polarizing figure in Los Angeles, with a narrowly positive approval rating, according to a USC Price/Los Angeles Times poll. He remains popular with younger voters and Latinos but significantly less so with whites and older voters. His standing among L.A. voters never fully recovered after his 2007 disclosure of an affair and the public breakup of his marriage.

But former Obama strategist Anita Dunn points to Villaraigosa's high-profile role as chairman of the 2012 Democratic convention, and his consideration for a cabinet post, as evidence of his rising stock nationally.

With his strong popularity among Latinos, she says, he has become "one of the leading figures for a growing, vocal and critical constituency" and is likely to be in high demand as a surrogate in the 2014 and 2016 federal election campaigns.

"He is valued for his political skills, for his ability to communicate, for his ability to put issues in kitchen-table terms," Dunn said. "He is clearly someone with a very bright future, with a national platform and a California base — and those are two really potent things in politics."

Villaraigosa burnished his national image partly through his leadership at the U.S. Conference of Mayors, his work locally and in Washington, D.C., on transit issues and climate change, and by fiercely challenging the L.A. teachers union as an "unwavering roadblock to reform." He was frequently cited by Republicans on the 2012 campaign trail for pressing city employees to nearly double their pension contributions from 6% to 11% — although critics note he didn't take on bread-and-butter labor issues until the city's precarious financial position forced him to do so.

One of Villaraigosa's biggest challenges should he run statewide may be his relationship with labor. After losing his long battle to gain control of the L.A. Unified School District, he infuriated union representatives with a 2010 speech asserting that United Teachers Los Angeles fought change and slowed the pace of education reform "at every step of the way."

A onetime union organizer, he became the target of protests at City Hall — and was compared to Wisconsin Gov. Scott Walker, a nemesis of organized labor — after pushing through city employee layoffs and furloughs. He has expressed major regrets about a five-year, 25% raise package he approved for city workers in 2007. And, as he left office, he added a final affront to public-employee unions by recommending no pay hikes for city employees until 2017.

"I know how hard our employees work, and our teachers work; I just think there are things that are broken that they are defending and they can't continue to defend," he said. "We have to all shoulder the responsibility of setting ourselves on a more sustainable path, and I'm not intimidated by them, like some."

Villaraigosa acknowledges that his tangles with labor are likely to carry a political cost, particularly if he faces Democratic heavyweights such as Atty. Gen. Kamala Harris and Lt. Gov. Gavin Newsom in a gubernatorial race. 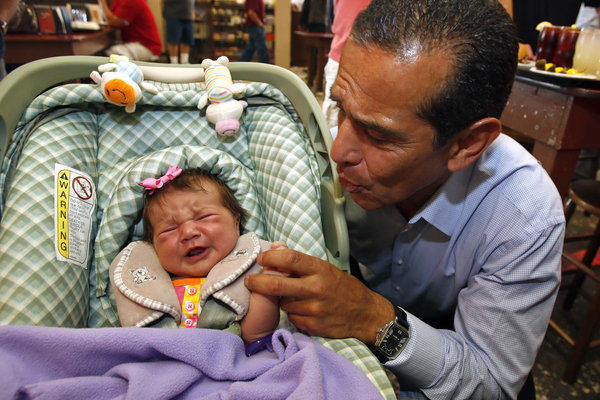 For now, Villaraigosa says he is not focused on those sorts of political calculations. He may return for a time to the private-equity field, he says. When asked why he wants to run for governor, he didn't have a ready answer.

"That's what the listening tour, that's what the think tank, and the university, is all about," he said after a pause. "I want to be around people who can help me think through how you fix the challenges that face us as a state, the challenges that face great global cities like ours, and the nation. I'm not thinking specifically about anything right now, other than, you know — I want to take this on."

Some of his allies say a period of dormancy could be good for his image.

But Villaraigosa, at 60, insists he will "be around."

"I'm not going to put my head in the sand and disappear." 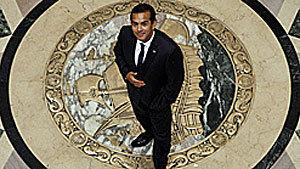 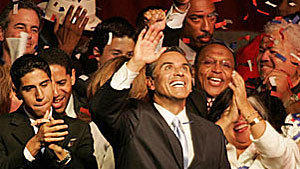 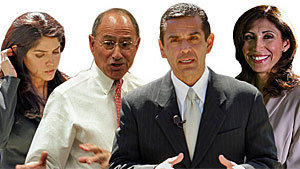