In southern Arizona, Glenn Weyant ‘plays’ the border fence with a mallet or cello bow to create haunting compositions, using the wall as an instrument of dialogue. 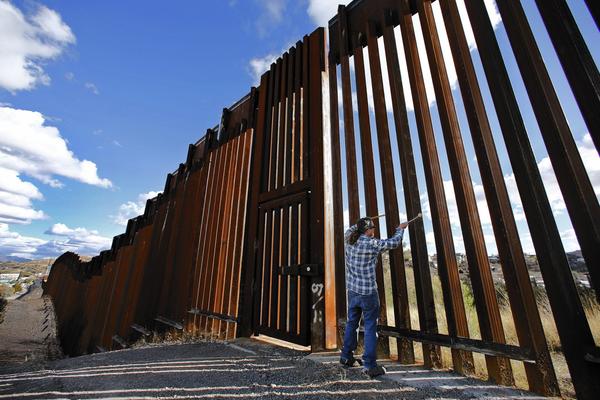 In southern Arizona, Glenn Weyant 'plays' the border fence with a mallet or cello bow to create haunting compositions, using the wall as an instrument of dialogue.

Photography and Video by Mel Melcon

SASABE, Ariz. -- On a windy day in southern Arizona's remote borderlands, Glenn Weyant had everything he needed to make music — a cello bow, a mallet and the miles-long fence dividing the United States and Mexico.

His method, like his music, was improvisational and low-tech: He inserted electronic equipment into an Altoids tin, turning it into a microphone. Weyant filled the tin with magnets and pressed it against the fence a few inches off the ground. Wires attached to the tin led to an amp and several effects pedals — the kind electric guitarists use — which allow him to manipulate sounds.

Desert scrub, mesquite and sun-bleached rocks would serve as his audience; sometimes they do double duty as instruments.

"Nobody thought of the border wall as possibly anything other than something to separate people," he said. "I transform it. I play it."

For eight years, Weyant has tapped, banged and stroked the fence to produce haunting, sometimes ethereal, sounds in a region he has called the "de facto militarized zone." Compositions can last a minute — or more than half an hour.

"I'm a border deconstructionist," said Weyant, a 50-year-old Tucson resident. "I want to deconstruct preconceived notions. What I'm saying is you don't need to be afraid of the wall. You have nothing to fear."

Weyant moved to Tucson 19 years ago when much of the border fence in southern Arizona was barbed wire. It seemed forbidden. He didn't know whether he could even touch it.

"Am I allowed?" Weyant recalled wondering.

Though people tend to stay away from the fence — at least on the northern side — it's not against the law to touch it.

The New Jersey native had been drawn to unusual sounds his whole life — as a boy he enjoyed listening to the hypnotic pattern of his grandfather's electric fan. One day in 2005 — a time of growing concern about illegal immigration and terrorism — he decided that he wanted to hear what sounds the fence could make.

"It was a symbol of fear and loathing. I wanted to transform it into something else … an instrument so that people on both sides can have open dialogue and communication," Weyant said.

He experimented with drumsticks, mallets, violin bows and cello bows. Sometimes he'd use sticks found on the ground.

In Nogales, he played a fence made of re-purposed helicopter landing pads, sometimes creating a staccato sound. He'd capture the noise from birds landing on top of the fence, and the sounds of cars and people passing through the port of entry.

In Sasabe, he created a delicate raspy sound when he put a violin or cello bow on rusty mattress wires ranchers had stretched between fence posts to keep their cattle from straying into Mexico.

The results, he said, were beautiful.

Weyant is more interested in creating effects than melodies. His recordings can sound like wind chimes or have the flute-like breathiness created by blowing across a bottle top. Other sounds resemble moans, whistles and clicks and suggest whale songs or the ambient noise on a New Age relaxation tape.

"Some people describe it as nails on a chalkboard," he said. "It can elicit a repulsion, fear, eeriness. It can be ethereal. It's something that can be expansive."

People who have stumbled across Weyant sometimes looked on from afar, unsure of what he's doing. Others have approached him and stayed for a private concert.

"Making the inhumane, humane and human," one person commented on a YouTube video of Weyant making music. "Bravo. Beautiful. Inspiring." In this recording, Weyant rarely touched the wall and mostly amplified the sound the wind created blowing across rocks and through the fence.

At one point, Weyant augmented the sound by playing a cello while wearing a zebra-head mask. His methods often defy explanation. He once employed a moose call, blowing into the whistle-like contraption while standing next to the fence.

For the most part, Border Patrol agents have left him alone.

Some agents have greeted him with friendly curiosity.

"Why are you playing a wall?" one asked. 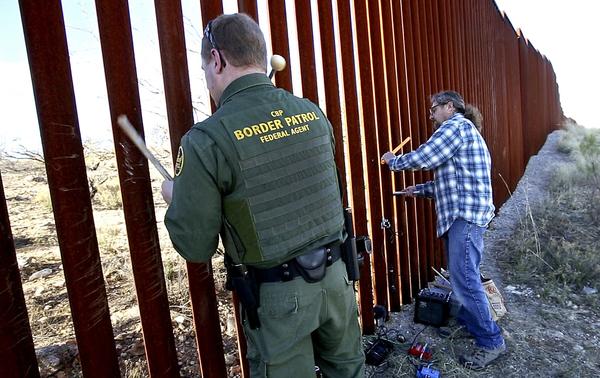 A Border Patrol agent joins Glenn Weyant for a duet.

Another radioed his superiors: "There's a guy playing the wall. Is he allowed to do that?"

A few agents have warned him about people on the southern side of the fence.

"Hey, you know they throw rocks," one told him.

"Usually," Weyant said, "when you play in a venue, you don't have people with guns watching you and one guy telling you that people on the other side want to hurt you." Still, he's never had any dangerous run-ins with people on either side of the fence.

Weyant, a former professor of journalism who is now a stay-at-home dad, said he gets to the border wall as much as he can, often once a month. He has given lectures about his music at various universities. He's collaborated with musicians who have incorporated his border sounds into their works. He sells his compositions for 99 cents to $500 but has given away some to humanitarian aid associations. He makes them available on his website, SonicAnta, or posts videos of himself on YouTube.

On the recent blustery afternoon, Weyant went to the border fence near the small town of Sasabe, about 70 miles southwest of Tucson. Behind him, long, parched grasses danced in the wind. Snarled mesquite poked from the sandy earth. Baboquivari Peak towered above. The rock formation sometimes serves as a compass for migrants who make the illegal trek north.

Crumpled water bottles, cans and plastic packages littered the desert — some of it detritus left by immigrants crossing from Mexico. Weyant has played some of the castoffs too, stroking them or tapping them against the fence or other objects.

Weyant said the border wall was an appropriate place to make music because it's haunted with stories.

"This section is where hundreds of people die," he said. "Did they come from Guatemala?"

Dusty handprints stood out against the rusty patina of the fence. "Was it just a kid who jumped the fence? So many stories," Weyant said. "There's a lot of mojo here."

In recent years, people throughout southern Arizona have seen the buildup of border security. They've seen sections of the fence morph from flimsy barriers into tall, fortified structures that tattoo the Sonoran Desert.

But few have heard the border change.

Weyant has. The sounds, like the fence itself, are often harsher than before.

After the Sept. 11 terrorist attacks, crews installed a fence near Sasabe made of industrialized steel columns set a few inches apart. Weyant slapped a rust-peppered bollard — one of hundreds poking out of the desert in military formation. The columns are full of slurry and aren't as interesting to play, he said. 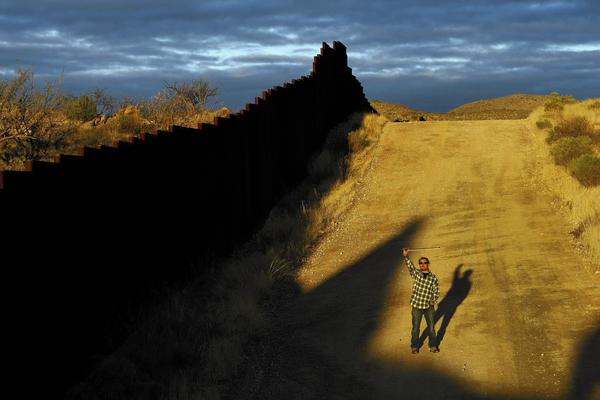 Glenn Weyant holds up a bass bow that he uses to play the fence in Sasabe, Ariz. Border Patrol agents have mostly left him alone.

He slapped the fence again. A dull thud followed.

He walked along the fence, past seemingly identical columns, until he came to one he had played many times before. He tapped it up and down with his hand, searching for a spot that resonated. He theorizes that the slurry deteriorates, creating air pockets that allow more refined sounds to echo.

He stuck on the Altoids tin with the amp wires. He found a discarded portion of the old barbed wire fencing and drew the cello bow across it.

The wind continued to blow and Weyant stopped playing as the gusts passed through the fence. It sounded like a howling coyote. 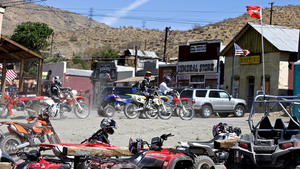 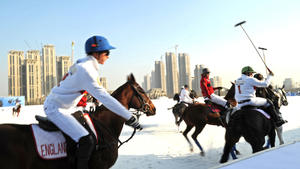 Family turns its home into a mosaic artwork 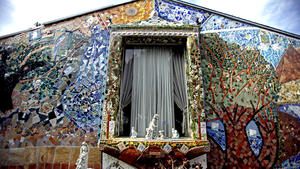