Q&A: The ins and outs of U.S.-Mexico border tunnels

Border Patrol agents discovered a drug-trafficking tunnel west of the San Ysidro border crossing this week after a sinkhole gave away its location.

The tunnel had yet to be completed but was already showing the tell-tale signs of a sturdy trafficking passage, including a rail and air ventilation system.

In an interview with The Times, Joseph DiMeglio, 41, a 13-year veteran with the Department of Homeland Security’s Immigration and Customs Enforcement and supervisory special agent for the San Diego tunnel task force for the last two years, described what authorities have encountered in years past.

How far do these tunnels go into the U.S. and where are they found?

As far as a third of a mile in some cases. The tunnel ends are hidden under the floors of buildings like homes or warehouses where it wouldn’t seem out of the ordinary to see some people going in and out.

The tunnel location depends on the soil and what’s around the area. Tunnels in Arizona are dug in sandy soil that requires more support than those a few miles east of Otay Mesa, which is a soil called Caliche that holds its form better.

Wherever they’re dug, the tunnel ends are usually found in areas that are not heavily populated, particularly at night, like an industrial complex.

In the Southwest, most tunnels are found in Arizona, said Lauren Mack, an ICE spokeswoman. Since 2006, authorities have found more than 80 sophisticated tunnels – about 25 of them were around San Diego. 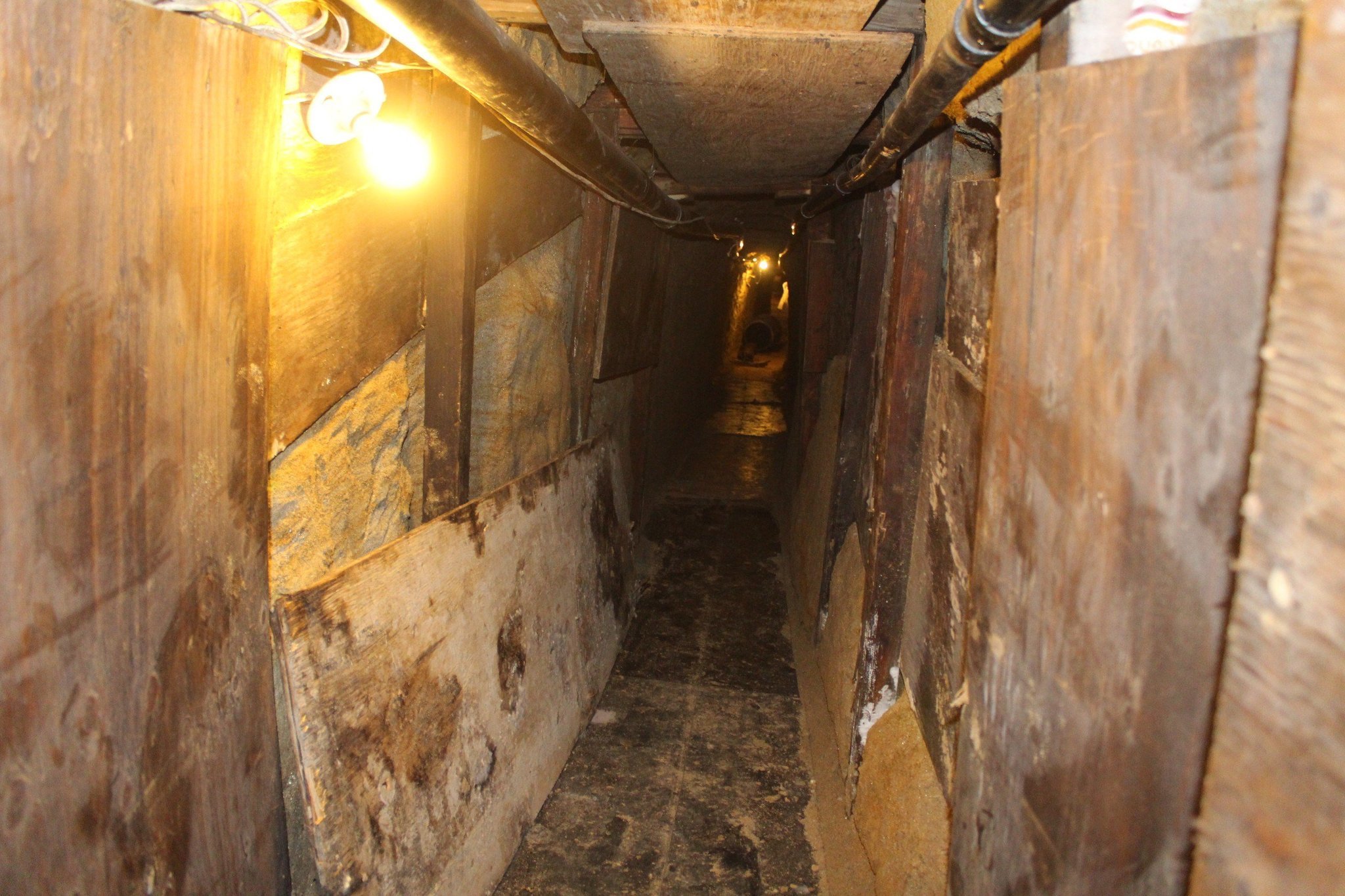 View of a tunnel found by soldiers of the Mexican army in the border city of Tijuana and apparently used to smuggle drugs into the United States on April 7. (Said Betanzos / AFP/Getty Images)

How big are the tunnels and who builds them?

They can stretch as far as 1,800 feet long but are narrow, DiMeglio said. They’re usually about 60 feet below ground and are generally in the 3-foot-by-4-foot range. DiMeglio once found a tunnel that was only 22 inches wide.

The tunnels are dug by people hired by drug cartels, he said. Some are paid very little to do the work and are sometimes forced to stay inside the tunnels until they’re finished so they don’t reveal its location.

The diggers use the same tools that have been used for hundreds of years – pickaxes and shovels, DiMeglio said.

How long do they take to build and how much do they cost?

Some can be built in as little as six months but others can take up to a year. The cost could range from $800,000 to $1 million.

“To you and I that’s a lot of money. To a cartel, that’s pocket change,” DiMeglio said. “These tunnels, if they’re successful, they get their merchandise through for one day – that’s paid for the tunnel and then some.”

The tunnels burrowed under the San Diego area are controlled by the powerful Sinaloa cartel.

Have traffickers changed how they hide them?

Yes, they have over the last few years, DiMeglio says. As recently as three years ago traffickers would be seen not-so-subtly driving big rigs to tunnel exits and loading tons of drugs for shipment. But as law enforcement has homed in, traffickers rely on more discreet vehicles like box vans or sedans.

Even finding a drug tunnel exit or entrance is more difficult, DiMeglio said. Traffickers have been known to build entire false floors that lift with hydraulics to reveal an opening or seal off an exit with fresh concrete and paint after every use.

What kinds of tunnels are there and what are they for?

Tunnels are placed in three categories: rudimentary, interconnecting and sophisticated.