The warm summer invited photographers out into the night for some stargazing.

Hoping to capture the Perseid meteor shower or the Milky Way on camera, photographers flocked to Southern California's beaches and deserts to find just the right spot.

Here's what our readers saw when they turned their lenses to the sky. 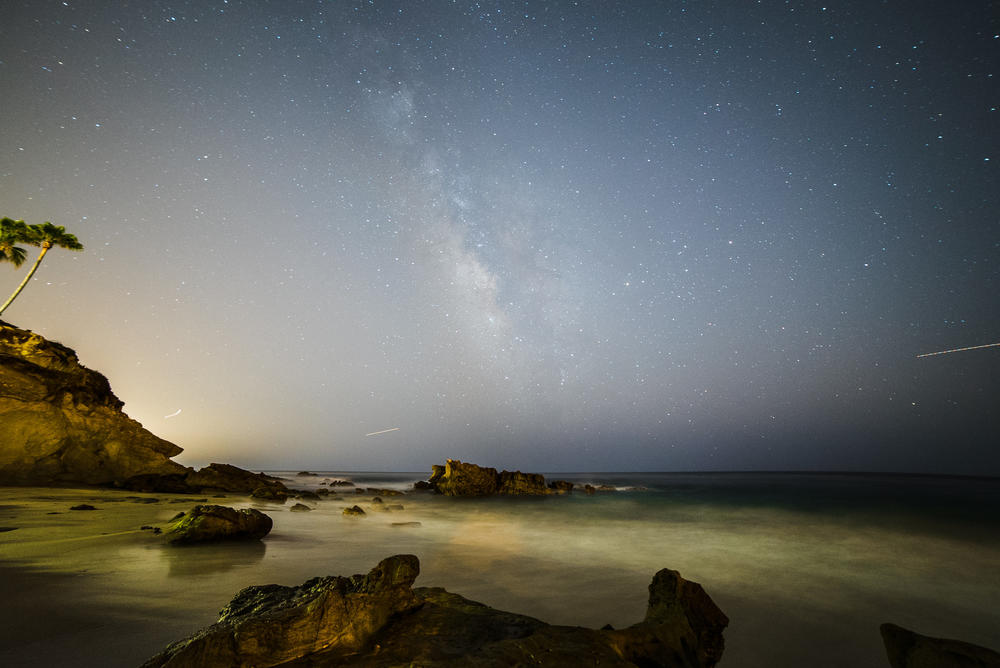 The ocean glows with the Milky Way above in Laguna Beach. (Owen Yano)

Owen Yano has spent the past few summers trying to capture as much of the Milky Way as possible.

“Even though we have a lot of air and light pollution in Southern California, the glow that it creates on the night horizons adds to the beauty when shooting at great locations,” Yano said.

In Laguna Beach, Yano’s challenge was to see how clean of an image he could make so close to civilization. 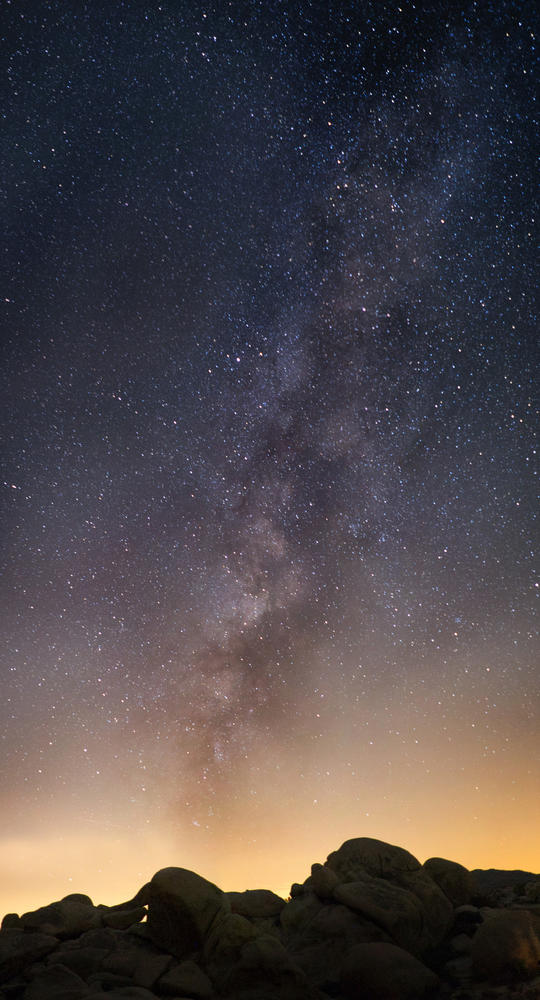 “There were so many people at Arch Rock that we decided to walk into the foothill behind it and capture it from there,” he said. “The Milky Way was almost directly overhead so I decided to capture six vertical shots and stitch them into a single vertical panorama in order to capture the Milky Way rising from the horizon.”

Yano said he hopes to revisit Joshua Tree at least once more before the galactic core is no longer visible.

“In both these photos, I tried to leave as much of the light pollution as possible as I feel it gives a sense of reality; rather than an over-Photoshopped rendition that is closer to science fiction or art,” he said.

Yano used a Sony a7S to make the images. 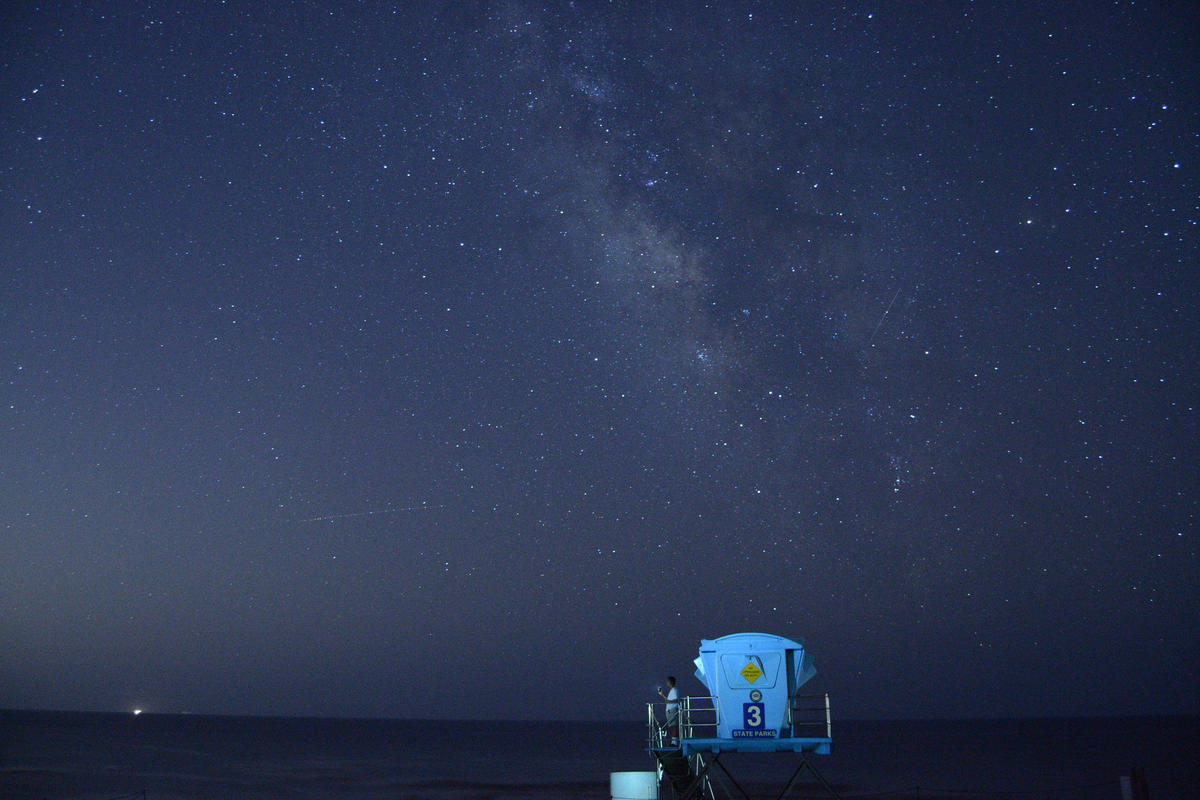 Abel Salazar headed to Leo Carrillo State Park for a day at the beach, but he was most excited for nightfall. Inspired by other photographers' earthly captures of the Milky Way, Salazar wanted to try it out for himself.

While shooting, Salazar made conversation with another photographer, Alejandro Rubalcaba, whose photo from that night was recently featured on Southern California Moments. After several tries and some ISO tips from Rubalcaba, Salazar got what he was looking for.

“It was a great experience to see the result of my shots being displayed on my camera,” he said. “This particular location offers great low light pollution, which is good for night photography.” 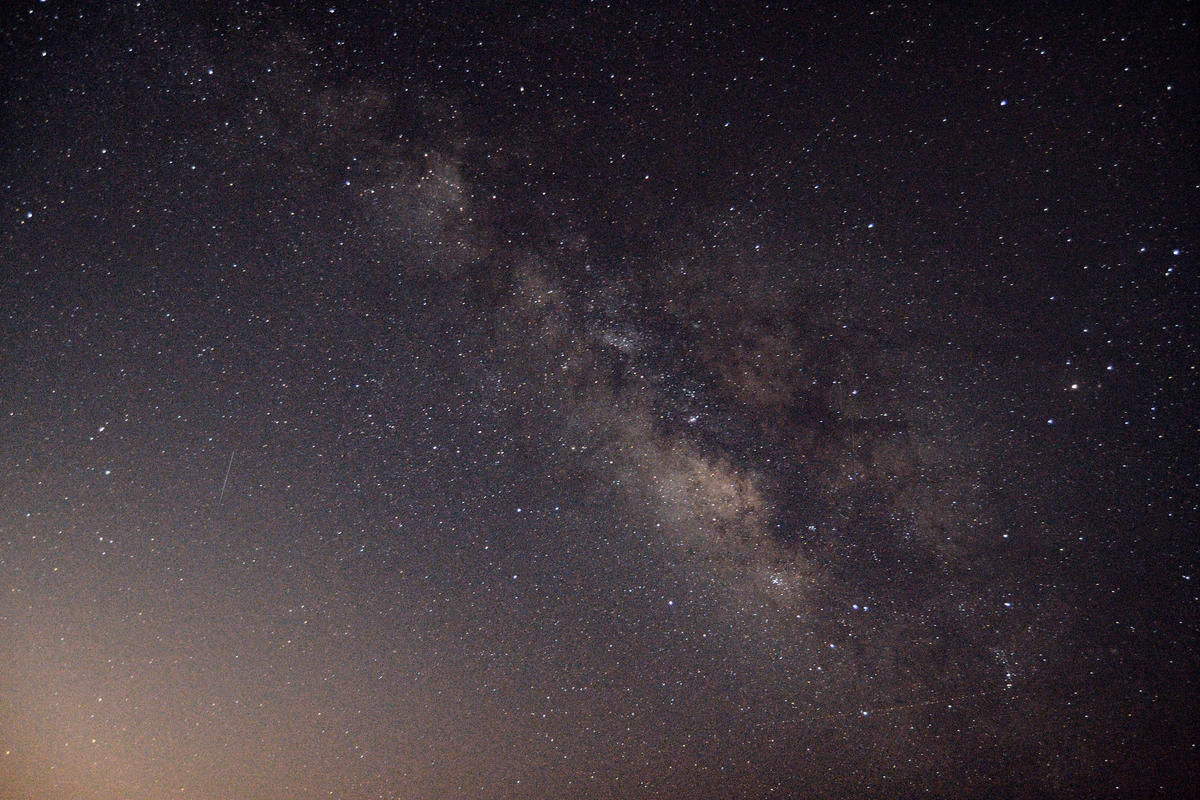 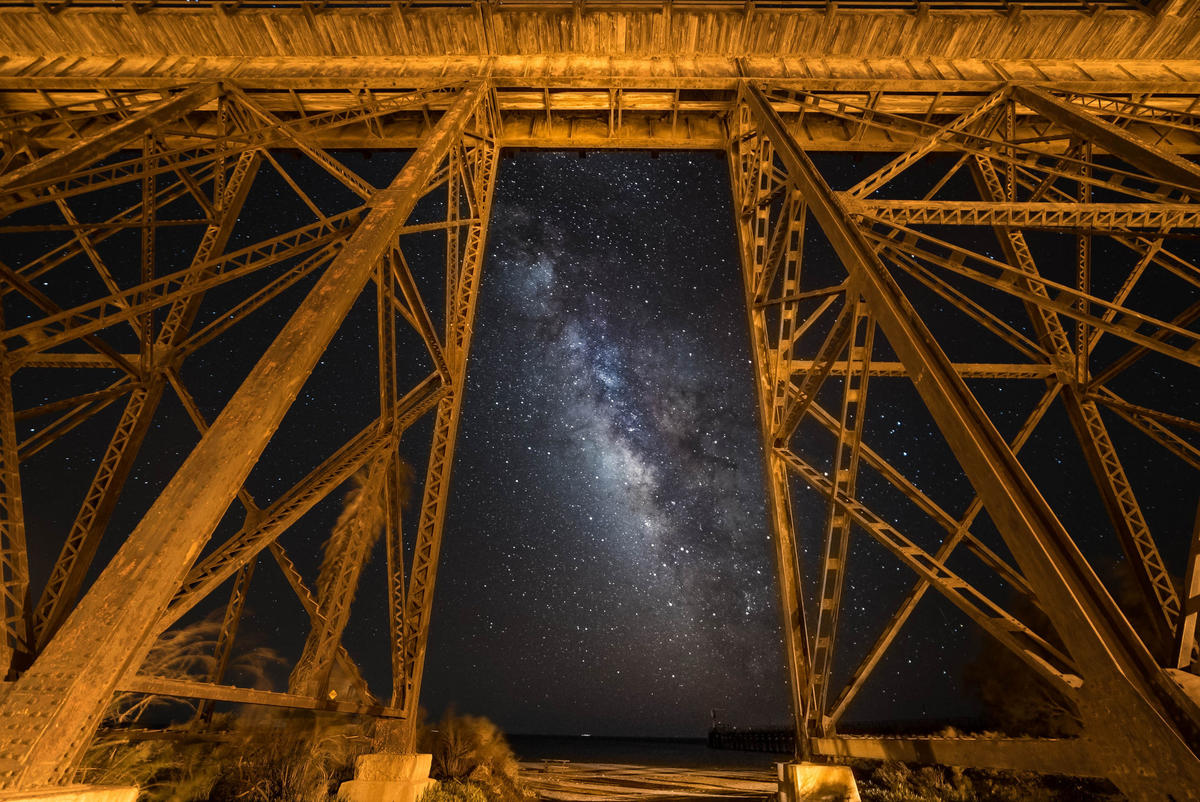 Hadley Johnson returned to Gaviota State Park, just north of his hometown of Santa Barbara, to see whether he could frame the Milky Way using an 800-foot train trestle that spans the park.

“It turned out that framing the Milky Way in the trestle was not a problem,” Johnson said. The galaxy is particularly prominent looking south and southeast in the summer.

“The challenge was ensuring that my camera and tripod remained still for 20 seconds as the winds whipped down Gaviota Pass and through the park,” he said. “I used my body to partially block the wind from hitting the tripod and in addition, held on to the tripod to keep it from moving. I feel fortunate that the wind did not blur the photo during the 20-second exposure." 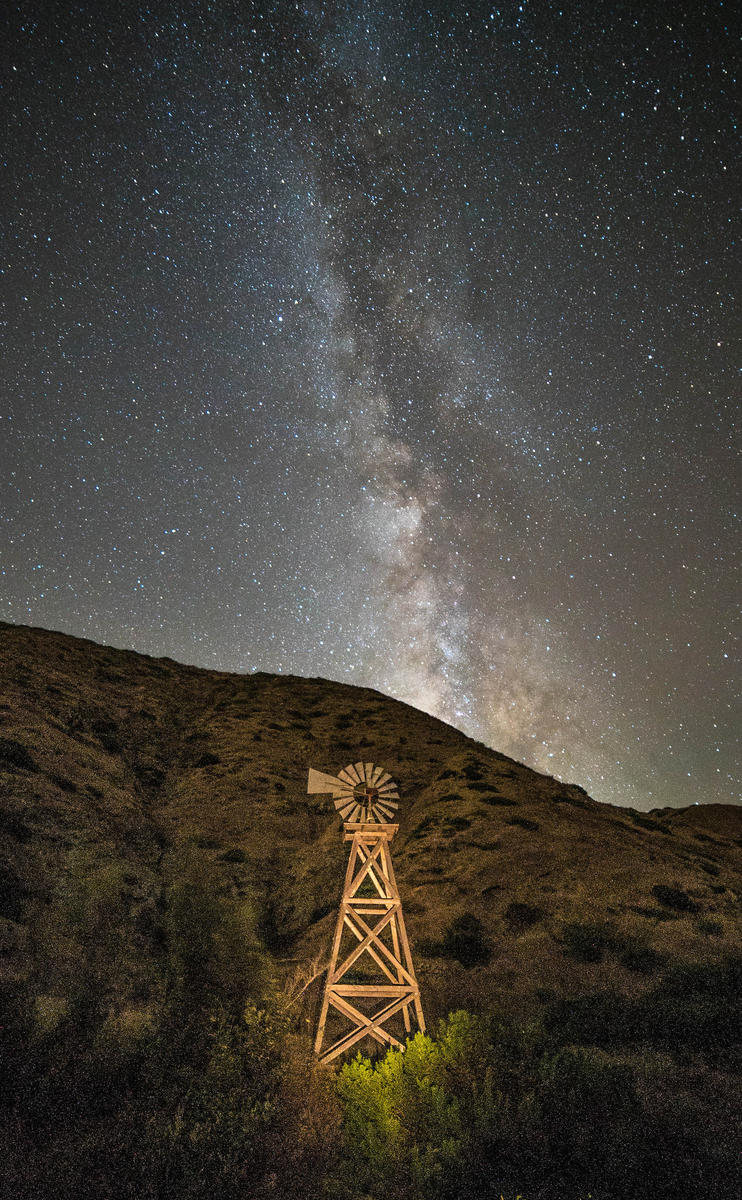 The Milky Way rises over a windmill on Santa Cruz Island. (Hadley Johnson)

Johnson used a Sony a7S camera with a wide-angle Rokinon lens to make the images. 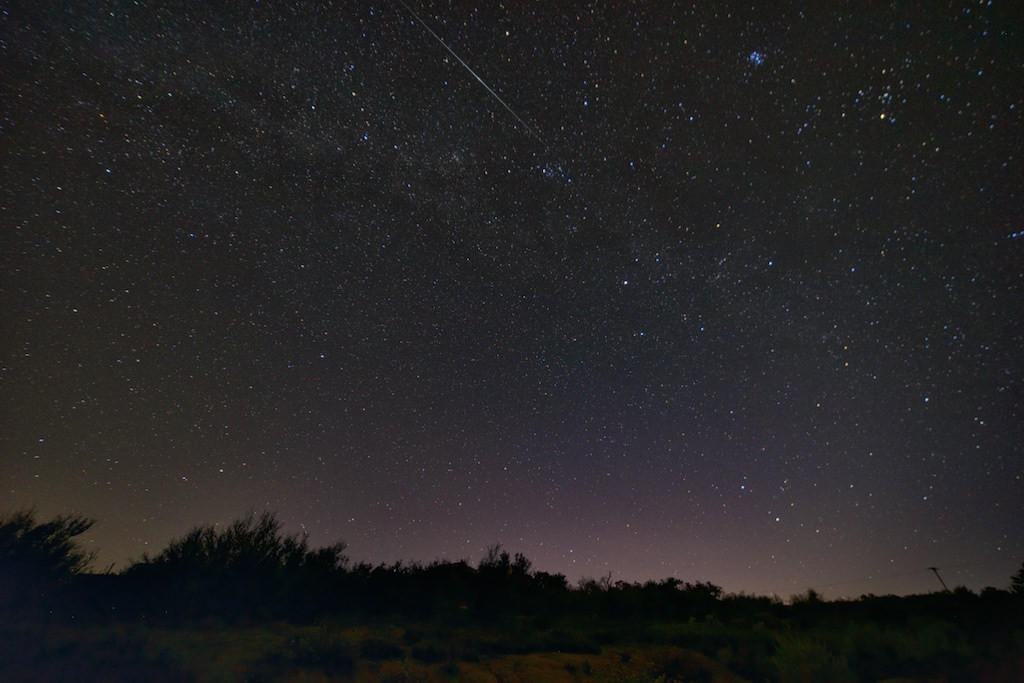 The Milky Way and a meteor seen above Anza, Calif. (Leon Aslan)

Amateur astronomer Leon Aslan and his wife, Anahid, make monthly trips to Anza, Calif., where they stay in a small observatory at the Orange County Astronomers club’s remote observing site.

The observatory consists of a “warm room” for sleeping and an enclosed patio area with a sliding roof to open the permanently mounted telescope to the sky. August's visit happened to coincide with the Perseid meteor shower.

Aslan, who has been doing astrophotography since the late 1990s, set up a tripod outside and let the camera capture 30-second exposures continuously throughout the night in hope of capturing a few meteors.

“I liked this photo as I happened to be looking at that part of the sky when the meteor struck,” Aslan said. “I thought to myself, ‘I hope I got that on camera’, and sure enough, I did. I relive that moment every time I look at this photo.” 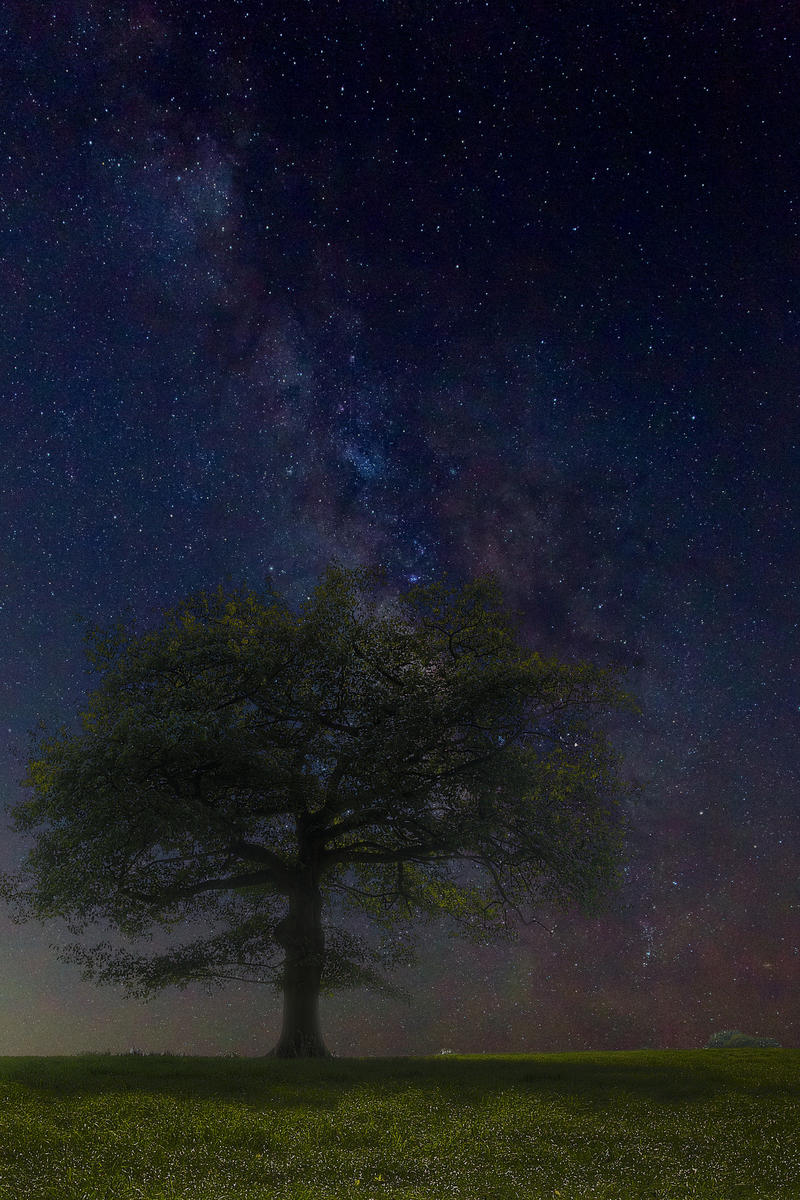 The Milky Way seen behind an oak tree in Death Valley. (Peter Buschmann)

One of the first shots Peter Buschmann ever took with his new Canon 5D Mark iii was one of the Milky Way in Hawaii two years ago.

“I am fascinated with the fact that the camera sees more than the human eye due to the long exposure,” he said.

Buschmann took several shots of an old mesquite tree with the galaxy in the background, but he kept searching for a friendlier tree. Then he found the oak, seen here. 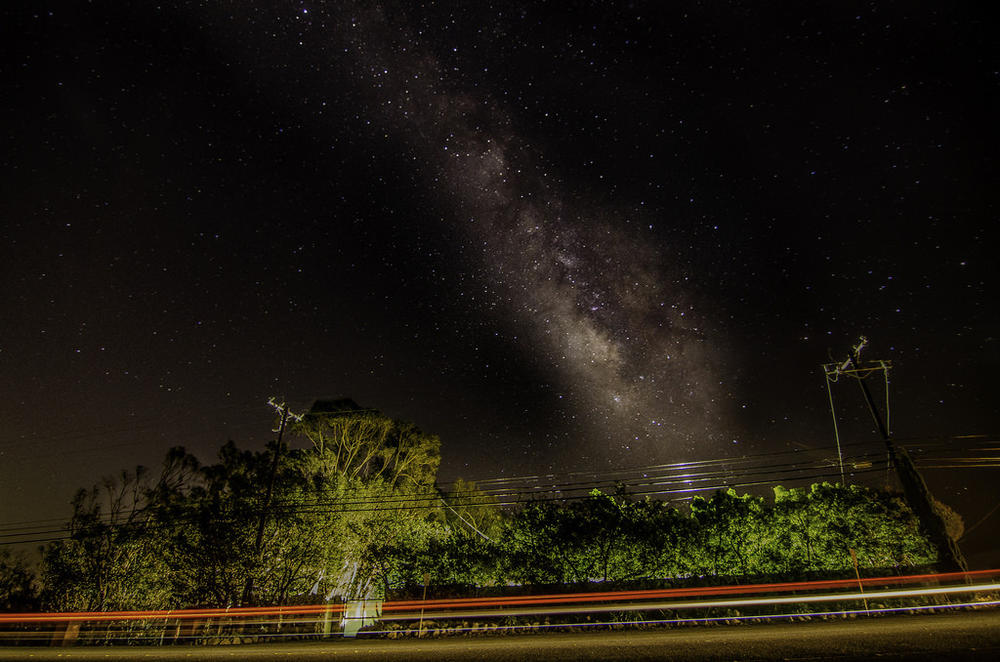 Surendra Sajwan says El Matador offers amazing landscapes during the day, but at night, it gets even more interesting.

Sajwan has shot photos of El Matador with the full moon, but he wanted to see whether he could capture the Milky Way on a new moon, or when the moon is invisible from Earth, despite the beach’s proximity to Los Angeles. He was surprised to see the galaxy in his photos so clearly.

“With the Milky Way in the sky, waves coming to your feet and many tiny rocks standing out, watching this sight gives a totally different feel (of the beach),” he said. “It’s an extraordinary experience and makes me more in love with L.A.” 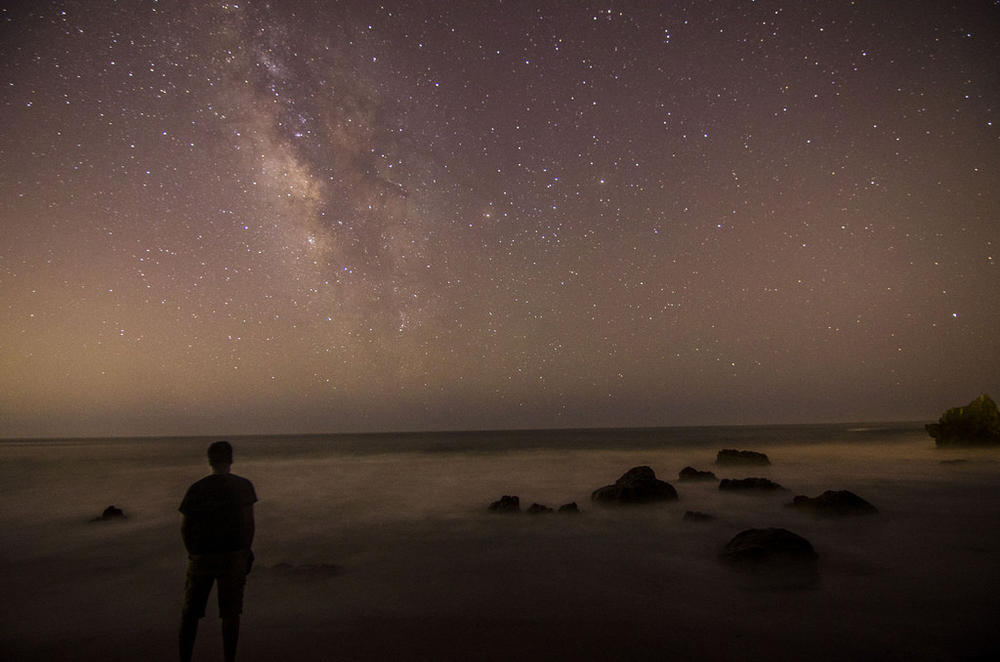 For the Record, 7:45 p.m.: A photo caption on a previous version of this post incorrectly described a windmill on Santa Cruz Island as being at Gaviota State Park.

Sean Greene is a graphics and data journalist covering science, the environment and medicine at the Los Angeles Times.