Why the Supreme Court’s redistricting decision matters for California

In one of its final decisions this term, the Supreme Court on Monday upheld the legality of Arizona’s citizen redistricting commission, which is responsible for redrawing congressional and legislative district lines. The case was closely watched by legal and political experts in California, some of whom feared that if the Arizona commission was struck down, California’s could be endangered, too.

What was the Arizona case about? Full story

Voters in Arizona approved a ballot measure in 2000 that created a five-member citizen commission to redraw lines for congressional districts. The case called the legality of that measure into question.

Arizona lawmakers asked the U.S. Supreme Court to decide whether the U.S. Constitution reserves the power of redistricting solely for elected state lawmakers, or whether unelected citizen commissions may also wield that authority.

The Arizona case hinged on a single word in the U.S. Constitution, which says that “the times, places and manner of holding elections for senators and representatives shall be prescribed in each state by the legislature thereof."

Arizona’s Republican-led legislature, which wants to regain the power to draw congressional districts, argued that “legislature” means elected legislators. Opponents argue that the word refers more broadly to the lawmaking process. In such states as Arizona and California, the lawmaking process includes voter-approved ballot measures. Opponents also say that if the Constitution were so narrowly interpreted, it wouldn’t leave room for a governor’s authority to veto laws.

Both sides agreed that, either way, states may rely on advisory commissions to draw boundaries, as long as lawmakers have the final word.

How did the Supreme Court rule?

The elections clause of the U.S. Constitution, the majority ruled, "surely was not adopted to diminish a state's authority to determine its own lawmaking processes."

Why does this affect California? Full story

Much like Arizona, California approved a ballot measure in 2010 that shifted redistricting authority for congressional seats from the state Legislature to an independent commission.

Two years earlier, voters had created the panel, the California Citizens Redistricting Commission, and given it the job of determining state legislative boundaries.

If the court had ruled differently, the authority of California's own redistricting commission would have come under question.

”The Republicans in California are extremely lucky,” said Tony Quinn, a former Republican redistricting consultant who had foreseen trouble for Reps. David Valadao (R-Hanford) and Steve Knight (R-Palmdale) if Democratic lawmakers had been able to shift their district boundaries in a way that would jeopardize their reelection.

How have California’s congressional districts been drawn since 2010?

The state commission designed its first maps in 2011.

California’s voter-approved laws require that the 14 commissioners — five Democrats, five Republicans and four unaffiliated — aim to respect community boundaries and produce districts with a "fairly regular shape." They must also consider “communities of interest,” which include minorities. They are forbidden to consider how any boundary would affect an incumbent or a political party.

Members of the commission are selected from applicants who apply online. Three independent auditors from the Bureau of State Audits select 60 finalists. Of those, the leaders of both houses of the Legislature have the right to reject a total of 24. The state auditor then randomly draws the names of three Democrats, three Republicans and two unaffiliated applicants and they become the first eight members. Those commissioners then select eight others from the remaining applicants: two Democrats, two Republicans and two unaffiliated. 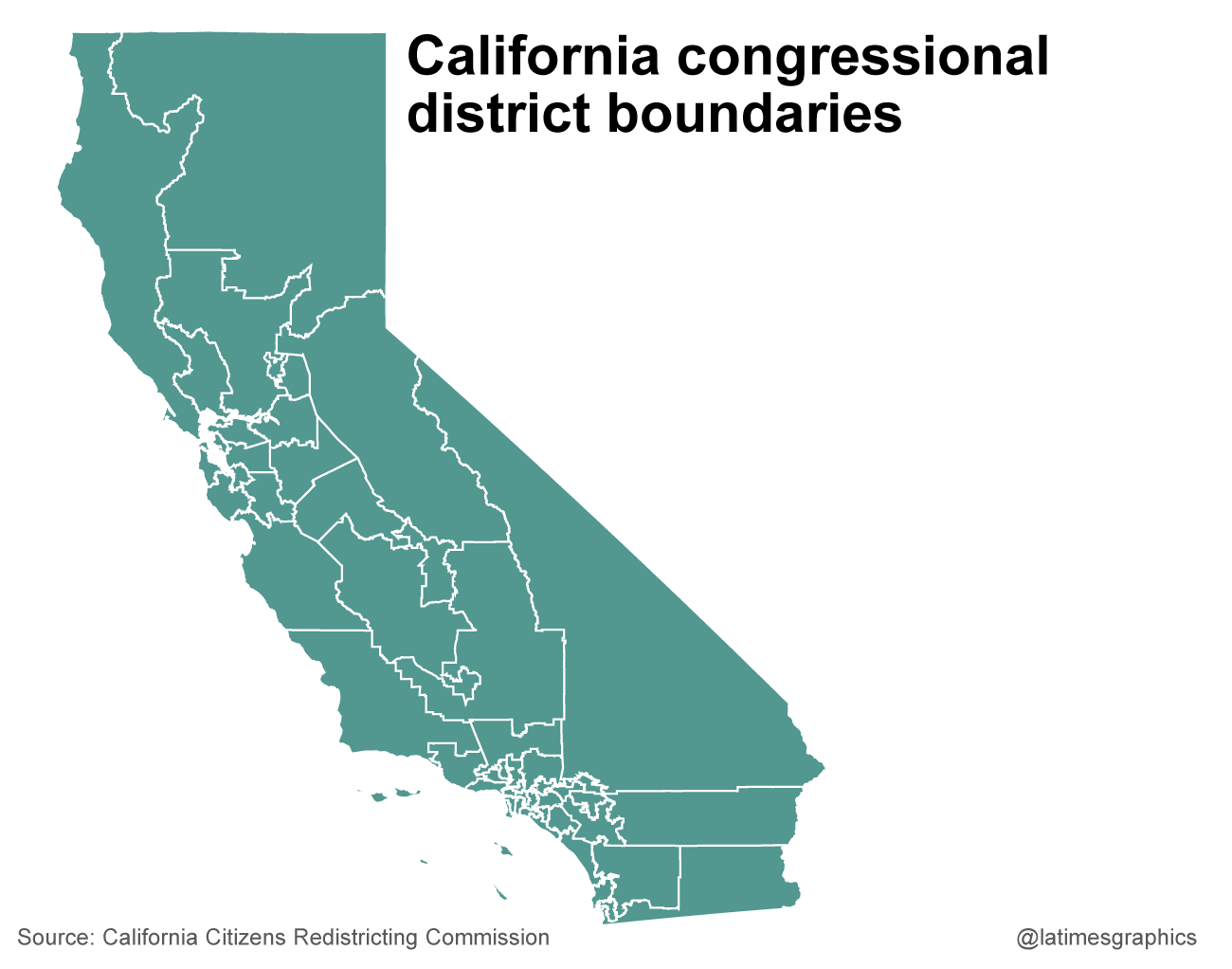 Are California’s districts likely to change much next time?

According to Mitchell, the Democratic redistricting expert, the decision could lend longevity to California’s congressional districts, offering stability for decades.

”We won’t see massive changes,” Mitchell said, since the independent commission is tasked with respecting community boundaries and considering “communities of interest,” which include minorities. Though some changes may be necessary to ensure fair representation of California’s growing Latino and Asian American populations, there probably won’t be wholesale changes to boundaries statewide.

There could be exceptions in four counties – Kings, Merced, Monterey and Yuba. Those counties were previously required to comply with a portion of the Voting Rights Act because they had had a history of discrimination against minorities. The provision, which required federal approval for changes to election procedures, was struck down by the Supreme Court in 2013. Mitchell says shifts in the boundaries could come in those counties, now that they are no longer bound by those requirements.

“I think you’re going to see some more redistricting commissions in these other states,” he said.

2:45 p.m.: This post has been updated with comments from Paul Mitchell, Tony Quinn and Allan Hoffenblum.

1:48 p.m.: This post has been updated to add a map of California's congressional districts.

The first version of this post was published at 8:17 a.m.