By getting married on the first anniversary of the Aurora tragedy that they have struggled to recover from, Eugene Han and Kirstin Davis will try to reclaim the date.

By getting married on the first anniversary of the Aurora tragedy that they have struggled to recover from, Eugene Han and Kirstin Davis will try to reclaim the date.

By getting married on the anniversary of the tragedy they have struggled to recover from, a couple will try to reclaim the date.

Eugene Han survived the bullets that tore into his body a year ago in a suburban movie theater. He endured surgeries and months of physical therapy to make his leg work again. On most days he could silence the screams and gunfire that lingered in his head.

What he couldn't do was stop the calendar.

As the one-year anniversary of the mass shooting approached, Han began to feel anxious. He worried about how it would affect his girlfriend, Kirstin Davis.

Han was shot twice trying to protect her when a gunman began picking off moviegoers just after midnight July 20, 2012.

Davis suffered a minor shrapnel wound in her back. The deeper damage came later as Han watched the carefree woman he loved become fearful and withdrawn. As he slowly got better, she seemed stuck. She was afraid to be alone, yet afraid to be with people. Sleep was rare, and when it came it did so with dreams of a gunman looking under theater seats for her.

Han and Davis grew up with each other in Aurora, and started dating only three years ago. Their first date was at a Dairy Queen. He was struck by her beauty; she liked that he was a singer in the church choir.

They had talked about getting married but it always seemed like something that could wait. After the shooting, Han, 21, felt a new impatience.

In April, during a vacation at a Texas beach, he knelt in the sand and slipped a diamond ring onto Davis' finger. "We have been through so much this year," he began as he proposed.

Marriage would prove they were moving forward.

Davis, 22, never liked crowds. But when she and Han heard the Batman movie, "The Dark Knight Rises," was opening July 20 at the Century Aurora 16, she thought going to a midnight showing might be fun. They had never gone to a movie that late. 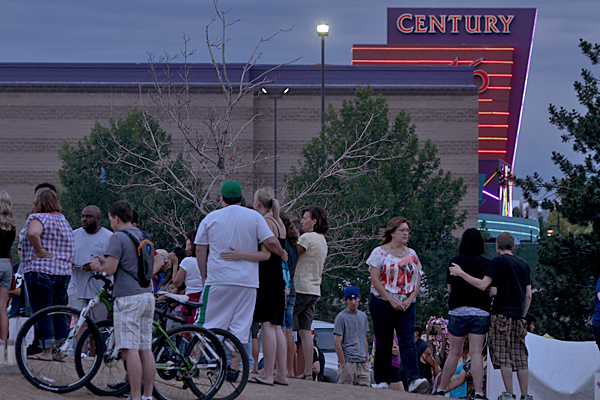 Mourners flock to a roadside memorial across the street from the Century 16 theaters where four days earlier 12 people were shot to death and 70 wounded by James E. Holmes. (Mark Boster / Los Angeles Times)

The couple and three of their friends tried Theater 8 but it was sold out. They chose the next showing, in Theater 9, and found five seats together in the second row near the aisle, not far from the emergency exit.

Han worked for a medical supply company and was tired from a 12-hour day. He dozed off during the previews, oblivious to the rowdy moviegoers. A few minutes into the film, he jolted awake with a sense that something was wrong, but glanced around and saw nothing unusual.

Moments later, the emergency exit door swung open. The light from the movie back-lit a man dressed in black, and Han saw the silhouettes of guns. He dived for the floor as the man tossed a canister of tear gas into the rows above them. Davis froze in her seat. Han yanked her to the ground and held her head down.

Through the gaps between the seats, he saw a man pacing as the movie continued to play. Suddenly it felt as if his right hip had been hit by a 90 mph fastball. The impact of the first bullet forced his right leg into the air and a second bullet passed through that knee. His friend, Adan Avila, was also shot as he shielded his wife.

Emergency dispatchers received the first call from inside the theater at 12:38 a.m. Police counted 30 gunshots in 27 seconds.

When Han heard a clicking noise, he figured the weapon had jammed. "This is our only chance," he shouted, but he couldn't walk.

His other friend, Luke Priest, who was uninjured, pulled him toward the exit but could not find the door. They were feeling along the walls in the dark when Davis glanced back and locked eyes with the gunman, who was 10 steps away. He was picking up a second gun as she and Han spilled out the door.

In the chaos outside, police told Davis they were taking Han to a hospital in Aurora, but when she arrived he wasn't there. She called hospitals in the metro area and found him at Denver Health Medical Center, nearly 20 miles away. When she, Han's mother and Priest walked into his room at 4 a.m., doctors and nurses were hovering over him, trying to stop the bleeding.

Davis collapsed into tears. "It finally hit me. I just lost it," she remembered.

Around 5 a.m., Han awoke from his first surgery — an exploratory one to assess his wounds. When he saw Davis, he began to weep. It was the only time in the last year he cried. "It hurt me to see how much it hurt her," he said.

Doctors performed a second surgery a few hours later and determined that removing the bullet and shrapnel would cause too much damage. There is so much debris in Han, his X-ray looks like a dust storm.

Physical therapy lasted three months as Han relearned how to use his leg, pulling his knee to his chest an inch at a time. He distracted himself from the pain by swapping snowboarding stories with his therapist.

Those who know Han watched him for signs of post-traumatic stress disorder. All along, he insisted he was fine. "My friends, my family, my faith grounds me," he said.

Davis had more trouble shaking the terror of that night — it's as it were a movie she cannot stop playing in her head. She remembered how the air pressure seemed to change in the theater with each round of semi-automatic gunfire, and even now she can sometimes feel the sensation in her chest.

She turned to her pastor for counseling, and he helped ease her fear and her guilt that Han was hurt saving her.

In January, Han and Davis toured the newly remodeled Century 16 theater along with other shooting victims and their families. The movie complex had been closed for six months, much of that time fenced off as a crime scene.

Han took his parents. He headed to the second row, sat down and marveled that they had escaped. Davis walked in, then turned around and walked back out. Even remodeled, the place spooked her.

The couple, other moviegoers who survived that night and local dignitaries returned for a special screening of "The Hobbit." Han and Davis have not been back to the theater since.

James E. Holmes is in jail awaiting trial on charges of killing 12 and wounding 70 at the Aurora Cinema. His defense attorneys admitted in court documents this month that he was the gunman, and said he was "in the throes of a psychotic episode" when he opened fire.

Han and Davis have gone to pretrial hearings twice, mostly out of curiosity to see what Holmes looks like. They forgave him long ago. Han says he has thought about writing to Holmes but probably never will.

Two weeks ago Han bought his childhood home from his parents; he thought it would be a great place to raise children. Davis will move in after they are married.

The couple will exchange vows in a small church about three miles from the theater, with five bridesmaids and more than 200 guests. Among the groomsmen will be Priest and Avila, who lost part of a leg in the shooting.

The Rev. Bob McClendon, who has known the couple since they were children, says he plans to offer a prayer during the ceremony for those who died in the theater.

We're closing one book and opening a whole new story."

Han came up with the idea to reclaim July 20 a few hours after he proposed. He doesn't know where it came from, he said. It just popped into his head.

Davis was not so sure at first. She worried that their wedding date would be seen as insensitive. Was it really appropriate to be happy on the anniversary of such sadness?

Han's mother, Rosa Han, says she understands that people will mark the day differently, but that for her family, the wedding will give them a day to rejoice rather than mourn.

"We want to show other people you can make it a happier day," Eugene Han said, "We're closing one book and opening a whole new story."

Interactive: Who they were 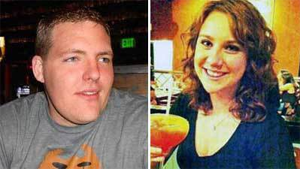 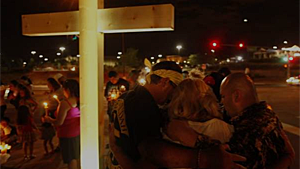 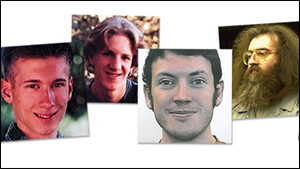