Deer Trail residents will vote on offering licenses to shoot down unmanned aircraft that dare enter their airspace. Sales already number in the hundreds, with no signs yet of a drone invasion. 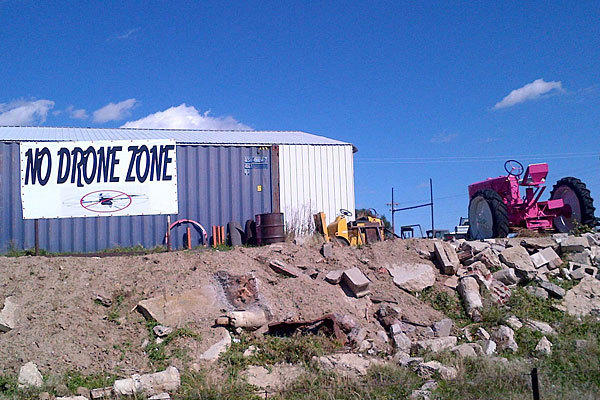 Deer Trail, Colo., Mayor Frank Fields’ anti-drone message could be seen from Interstate 70 before it was stolen. He initially put it up as a joke, but now he’s signing off on drone-hunting licenses. (Matt Pearce / Los Angeles Times)

Deer Trail residents will vote on offering licenses to shoot down unmanned aircraft that dare enter their airspace. Sales already number in the hundreds, with no signs yet of a drone invasion.

Wearing a black duster and a black cowboy hat, Phil Steel walked to the front of the meeting room armed with a Nerf gun and a smile.

The U.S. Army veteran was there to pitch his big idea: an ordinance that would legalize and regulate drone hunting inside Deer Trail city limits. If approved, residents could pay $25 to get a drone-hunting license; the town would pay a bounty for every drone bagged.

"Really?" someone asked sarcastically as the theme music to "The Good, the Bad and the Ugly" blared during Steel's entrance. Laughter rippled through the room.

Steel had hammered out the 2,800-word ordinance in just four hours. Its key points:

When a drone flies into its airspace, Deer Trail will consider it an act of war.

You can only shoot at drones flying lower than 1,000 feet.

Unless your life is in danger, you can only fire up to three shots at a drone.

Some at the August meeting thought the drone-hunting ordinance might be a good idea. Others used words like "stupid" and "a joke" to describe a proposal that they worried might become an embarrassment.

To many, that's exactly what it has become.

Out in the loping, golden plains about an hour's drive east of Denver, this little town of lonesome homes and chain-link fences looks a lot like the other hubs that sit astride Interstate 70 as traffic streaks toward Kansas: Blink, and you miss it.

Then things in Deer Trail (population about 550) changed when the town's trustees split 3 to 3 on the ordinance, automatically kicking the proposal to the residents for a vote. In doing so, the trustees managed to garner national media attention for Deer Trail at a time when drones are poised to become a part of everyday life.

Mention the word "drone" and locals hang their heads or throw up their hands. The idea is either a money-raiser for the town, a dangerous joke, or — according to its creator — a stand against the federal government, corporations and drug dealers.

"I have declared the sovereignty and the supremacy of the airspace of my town," said Steel, 49. "This is an act of sedition, and I proudly state that."

Just by the interstate, there used to be a big white sign sitting next to a pink tractor outside the mayor's welding shop. "No drone zone," it said, before somebody stole it in December.

The mayor said he'd put the sign up as a joke when the drone debate first started. But who's laughing anymore?

"Nobody likes humor," Frank Fields said recently of the town that he runs.

Before last year, the town was most famous for claiming to be the home of America's first rodeo in 1869; now, it's Steel's contentious proposal.

Steel's involvement in the drone ordinance has antagonized many of the town's residents, including some of those who support the measure.

"I agree with the 4th Amendment rights [argument], but I don't like him," said one resident waiting by the pump at the Deer Trail Phillips 66 gas station. She declined to give her name for fear of causing trouble.

The proposal to legalize drone hunting by selling licenses appealed to Fields purely as a source of income, the mayor said, because the town's coffers are bare and residents can't agree to pass a sales tax.

"A little bit of free money is going be good, we thought," said Fields, 57. "Evidently, nobody wanted that either.... Now people are trying to oust me and the town clerk because we went kind of far." 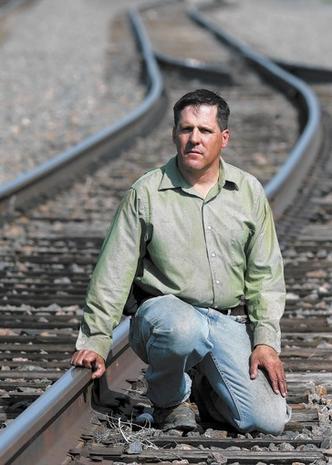 Phil Steel, who’s concerned about the use of drones by government, corporations and drug dealers, is the driving force behind the sale of licenses to shoot down unmanned aircraft in Deer Trail, Colo. (Brennan Linsley / Associated Press)

After a little prodding, Fields acknowledged that the town clerk is, yes, also his wife. That's just the kind of place Deer Trail is.

There are no drones flying over Deer Trail, it should be mentioned. At midday, when everybody is at work, there is hardly even any traffic: All you might hear is the snort of a horse fenced in somebody's yard, or the croak of a rooster.

"Across the board, very good people," said Arapahoe County Sheriff Grayson Robinson, who is retiring at the end of January. "I'm very proud to serve every one of them. There's a bit of an independent streak out there, which I have no objection to.

"But," the sheriff adds, "I obviously object to the ordinance."

Domestic drones are coming. The Federal Aviation Administration is working on plans to integrate drones into civilian airspace as soon as 2015. It has taken notice of Deer Trail's proposal.

"A [drone] hit by gunfire could crash, causing damage to persons or property on the ground, or it could collide with other objects in the air," the FAA said in a statement. "Shooting at an unmanned aircraft could result in criminal or civil liability, just as would firing at a manned airplane."

Which drones are being flown by drug dealers? ... Burglars who want to case neighborhoods?"

"You think they're the only ones?" Steel said of the Amazon drones. "There will be millions of these.... Which drones are being flown by drug dealers? ... Burglars who want to case neighborhoods? If you can also deliver a pizza, you can deliver a bomb, anywhere — at a crowded football stadium, at the Boston Marathon."

Though parts of the ordinance are meant to be funny, Steel said, he is serious about its message. He wrote it like he talks. It has frequent allusions to the federal government making power grabs over American airspace and American rights.

"To tell the truth, when I wrote the ordinance, there was an element of payback," he said.

In 2010, SWAT teams and a bomb robot rolled up to Steel's house, smashing his doors and windows to enter and look around.

"I'm in Deer Trail. We don't have these things," Tanya Lonneke, one of Steel's neighbors, told a news crew from Denver. "It looked like half the U.S. military was over there."

It turned out that Steel was a suspect involving a strange incident at his workplace in Arvada, about 60 miles away, in which a co-worker told police that when he picked up his telephone, liquid mercury oozed out of the receiver and onto his face.

Mercury is odorless, and dangerous to breathe, and Arvada police suspected Steel of attempting to kill his co-worker. Police searched his home for chemicals but did not find enough evidence to charge Steel. Arvada police say Steel remains a person of interest in the case. He denied any involvement. 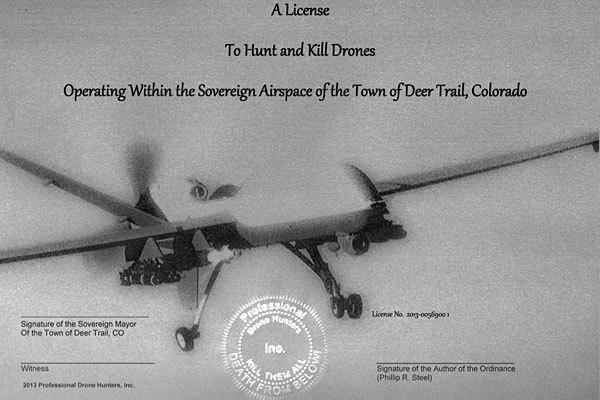 Even though the measure hasn't been passed, Steel has sold drone-hunting licenses to buyers around the country for $25 a pop, raising suspicions around town that he's just in it for the money. He had a spreadsheet detailing several hundred PayPal transactions from 41 states and two provinces in Canada.

Lonneke, Steel's neighbor, bragged on Facebook about buying a license: "Today is the best day of my life I GOT MY DRONE HUNTING LICENSE TODAY!!!!!!"

The licenses are printed on vellum, and come with the warning that they "may not be recognized by tyrannical municipal, state or federal governments." Even though the licenses have no legal value, Fields, the mayor, has abetted Steel's private sales.

"I was all about it — heck yeah! I signed it as sovereign mayor, and town clerk signed it as a witness," Fields said, adding that he signed about 100 licenses personally before Steel got a stamp with Fields' signature on it to print on the rest.

"We kind of stirred it up a little," Fields said. "Once it's all said, I don't have regrets. It is what it is."

Deer Trail, with its pretty, painted gazebos mixed in with rusted-out cars parked on lawns, still could be released from its notoriety — and the occasional drone tourist — should the measure fail at the ballot box in April.

If Deer Trail says no to drone hunting, fine, Steel said. There are lots of other little towns in Colorado. 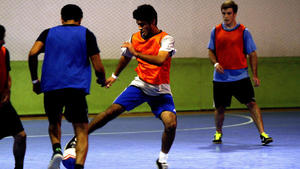 You have to know how to pass really fast, how to attack in small spaces and how to defend all at once."

Dentist for Anaheim Ducks winces at every hit 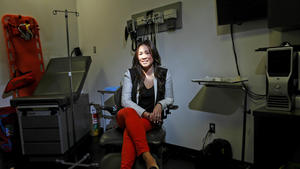 I always say a prayer. I pray that no one gets hurt." 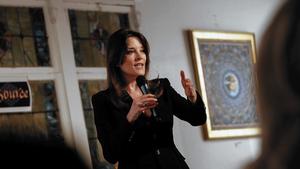 This district is filled with some of the most creative people in the country."