For U.S. farmers and Mexican workers, it’s tough being legal 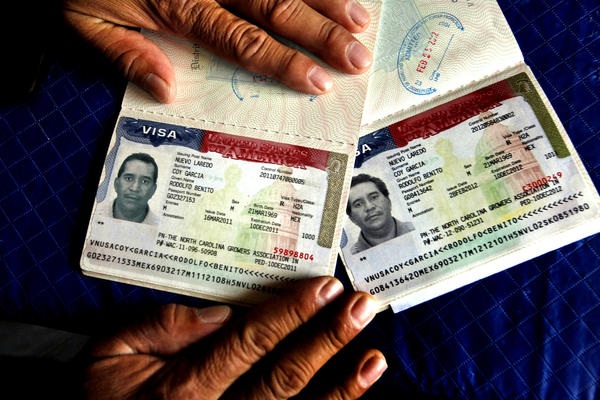 A worker shows the documents that have made it legal for him to work seasonally in North Carolina under the H-2A guest worker program. He gets a new visa each year if he and his employer meet the requirements. (Carolyn Cole / Los Angeles Times) More photos

There are millions of undocumented workers in America, and thousands of employers who illegally hire them.

But Rodolfo Benito Coy Garcia and Rusty Barr play by the rules.

Barr is an employer and Garcia his employee, one who travels from Mexico to spend 10 months of the year planting, fertilizing and harvesting Christmas trees in this tiny mountain town near the Tennessee state line.

For both, following the law has disadvantages. Barr must go through a lengthy, complicated and expensive process to hire Garcia, spending more than his competitors, who he says employ undocumented migrants. Garcia must leave behind his family for most of the year to work a job that pays little by American standards, with no chance of becoming a citizen in the country where he has spent much of his adult life.

"I miss my family, yes," said Garcia, whose wife and two daughters live in Tamaulipas, a Mexican state that borders Texas. "But we come here to support our families and provide our kids with a better education."

We come here to support our families and provide our kids with a better education."

Much of the debate over immigration reform has focused on the millions of undocumented workers living in the United States. But many say fixes must also be made to the programs that bring tens of thousands of guest workers to America every year to work at farms, hotels and restaurants. Such programs were among those that led to a standoff between congressional negotiators before their spring recess. A tentative agreement reached over the weekend covered some low-wage workers but not agricultural employees.

Employers say that the H-2A agricultural visa program, under which Garcia is employed, is broken and that the complicated rules and high costs push employers to hire undocumented workers. Labor advocates say that the programs create a group of second-class citizens who are brought here to do grueling and often dangerous work without protection against abuses.

Placating both sides will be a challenge.

"There's no obviously correct answer as to how easy it should be to use this program," said Madeleine Sumption, an analyst with the Migration Policy Institute, a Washington, D.C., think tank. "It often comes down to a negotiation between labor advocates who want more protection for foreign workers ... and the growers who are concerned that these protections cost money."

These are not jobs generally sought by citizens. Last year, the North Carolina Growers Assn., which helps farmers such as Barr fill out the H-2A paperwork, spent $98,000 on advertising for the 8,000 jobs its members were seeking to fill. Just over 250 U.S. workers applied for the jobs, but 70 never showed up, about 180 quit in the first two days, and just 10 finished the season.

"That's the frustration; the whole program is set up to give preference to U.S. workers," said Lee Wicker, the group's deputy director. "But U.S. workers don't want to do these jobs, and I don't say I blame them."

Although the H-2A program is the only legal way to bring foreign farmworkers to the United States, most employers don't use it. H-2A workers fill an estimated 6% of U.S. farm jobs, the majority in states such as North Carolina and Georgia, where employers are hard-pressed to find anyone else willing to do the work. Undocumented workers fill most of the 1 million or more farm jobs open nationally every year; California, which hires more farmworkers than any other state, uses H-2A workers less frequently because its location close to Mexico makes it easier for employers to find undocumented workers.

Barr says it's easy to understand why only a handful of employers bring in guest workers. He spends $1,000 per worker for visas, consulate fees and transportation to North Carolina. He's required to pay for their housing, and he estimates he has spent more than $80,000 building a house on his property, plus $36,000 to buy a mobile home and $5,000 a year to rent an apartment for the 48 workers he employs during the growing season. The government makes him pay them $9.68 an hour, which is about one-third higher than the minimum wage in the state, and he spends thousands of dollars on workers' compensation insurance.

Costs aside, the process is a headache of applications and paperwork required by the Department of Homeland Security and the Department of Labor. Barr must go through lengthy steps to make sure no American wants a job before he hires a Mexican worker. He must place ads around the state and hire any American who wants to work, even if the job has already been filled by a migrant worker. The chance of violating a rule, even by mistake, is high, he says — a neighbor had to pay a fine of $80,000 last year. 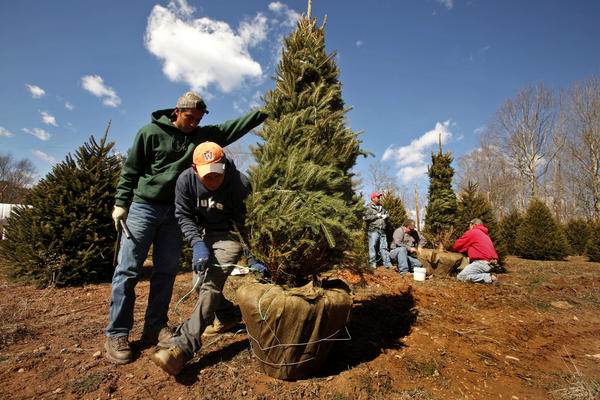 Barr says these steps are worth it because he doesn't want to be raided by immigration officials and lose his crops. But the expense puts him at a competitive disadvantage with the other Christmas tree farms in the region, he says. Those that use undocumented workers pay the minimum wage and don't offer housing, insurance or transportation, he said.

For employers like him, "It's definitely a disadvantage to be providing higher wages," Barr said.

A coalition of farmers has proposed a more flexible alternative to H-2A. The Agricultural Worker Visa Program would allow two options for guest workers. One would give workers visas good for 11 months — one month longer than is now permitted — and would allow them to move from employer to employer, which is difficult under existing rules. In theory that would allow undocumented workers to leave abusive employers and find jobs elsewhere, worker advocates say.

The other option would allow an employee to work for an employer under contract for a fixed period, but would give the worker a visa term of up to a year. The visa could be renewed indefinitely as long as the worker returned to his home country for at least 30 days over a three-year period. This option would, in theory, ensure employers a more predictable supply of workers and would give workers more stability.

H-2A workers are envied by many undocumented migrants, in part because they don't have to worry about being deported, said Jamie Mendoza, an undocumented Mexican migrant who has lived in Jefferson, a town near Crumpler, since 2005.

Mendoza works odd jobs, including on Christmas tree farms. His family still lives in Mexico, and because he doesn't have the proper papers, he can't visit them unless he wants to risk a border crossing that could cost him his job in North Carolina. 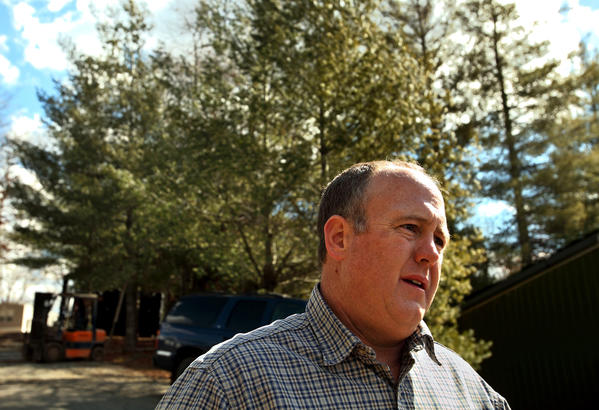 Rusty Barr owns Barr Evergreens in Crumpler, N.C. He uses Mexican workers under the H-2A visa program, but he says the costs can put him at a disadvantage with operations that use undocumented workers. (Carolyn Cole / Los Angeles Times) More photos

"At least they can come and go every year," he said about the H-2A workers, lingering in the small tienda in Jefferson where immigrants come to buy food from Mexico and send money home.

Garcia and other workers on Barr's farm say they know they're lucky. The jobs are in such demand that workers often have to pay recruiters to hire them; there have been reports of recruiters demanding hundreds of dollars in bribes. Few can afford to take trips home, and they miss their families, said Armando Rodriguez Mendoza, 36, but even if they were in Mexico, they'd be roaming the country looking for work.

But the situation is stressful. The workers speak to their families on the phone or through Skype, but because all of them share rooms, there's little privacy. They often live on farms in small towns, isolated from the rest of the world.

Nancy Howe, who owns the Olde Towne Barber Shop in Jefferson, says one worker cried on her shoulder because he wasn't home to help his wife with a newborn. Once the harvest season starts, "you hardly ever see them," she said. "They work seven days a week from the time they come to the day they leave. I would love to see them be able to live a normal life."

And there's no guarantee of a job the next year, especially for aging workers. This year, trying to save money, Barr called seven workers and told them to come in May, three months later than their usual arrival. He says workers often pull him aside and ask him for help in getting legal papers so they can bring their families to Crumpler. But he knows there's no legal way to do so.

Still, Barr's workers have it much better than most. Last month, the Southern Poverty Law Center reported that H-2 programs were "rife with labor and human rights violations committed by employers who prey on a highly vulnerable workforce."

One worker said that at a North Carolina tobacco farm, the foreman would get drunk and threaten workers with a gun. He locked them out of the kitchen and required them to buy meals from his wife.

"He'd humiliate us in the field," the worker said in an interview. "But we wanted to work, so what could we do?"

Such complaints aren't uncommon, said Mary Lee Hall, a lawyer with Legal Aid of North Carolina. But because they want to come back the next year, workers rarely complain.

"They put up with a lot; they really do," she said. "This is how some parts of Mexico feed their families."

Labor is calling for strong union protections for workers and assurances that migrants aren't taking jobs Americans would want. Some in labor are calling for a path to citizenship for guest workers who come to the U.S. for a certain number of years.

That makes farmers nervous because they fear they could lose their investment.

"We've spent a lot of money training these guys, so yeah, we're selfish about it. We'd be sad to see them go," said Wicker, the growers association official.

Barr helped six workers become citizens after the Immigration Reform and Control Act of 1986, which allowed some seasonal agricultural workers to gain legal status. All left agriculture within two years, he said, for fields such as construction and trucking. (Only those who had resided in the U.S. since before 1982 and those employed in seasonal farm work during a certain period were eligible to for legal status.)

Garcia and the dozen other workers sitting around the house on Barr's farm swear they wouldn't leave farm work if they became U.S. citizens.

Even without a chance at citizenship — even with the long bus ride, the crowded conditions, the separation from family — Garcia and others said, they'd be happy to keep coming to North Carolina for 10 months of the year.

"In Mexico, they pay very little," Garcia said. "You work all day and you earn what you earn here in an hour. It's a big difference."

More on the immigration debate:

Is the border secure?

Alana Semuels is a former staff writer for the Los Angeles Times.