Pope Francis and Indian Prime Minister Narendra Modi both landed in the U.S. last week in overlapping visits. They each lead a billion people worldwide, and drew crowds, worship and controversy while here. There were tears, talk about climate change and the role of women. Still, a closer look at their itineraries shows some key differences.

Obama welcomed the pope at the airport, hugged Modi at the U.N.

Obama greeted Modi with an embrace in a United Nations hallway Monday morning, on Day 5 of Modi's five-day trip to the United States. It was the fifth meeting between the two world leaders in a year, according to an Indian government spokesman.

The pope hung out with the homeless, abuse victims and prisoners; Modi with Google, Facebook and Apple

Modi and Pope Francis had some meetings in common: Both spoke to world leaders at the United Nations and met with President Obama. But the similarities stopped there.

Francis, on the other hand, took a detour to meet with victims of sex abuse, turned down lunch with leaders in Washington to dine with the homeless and visited prisoners in Philadelphia and inner-city students in East Harlem, New York. Francis also addressed a joint meeting of Congress, the first pontiff in history to do so.

1 million gathered to see the pope in Philadelphia; 18,000 showed up for Modi in California 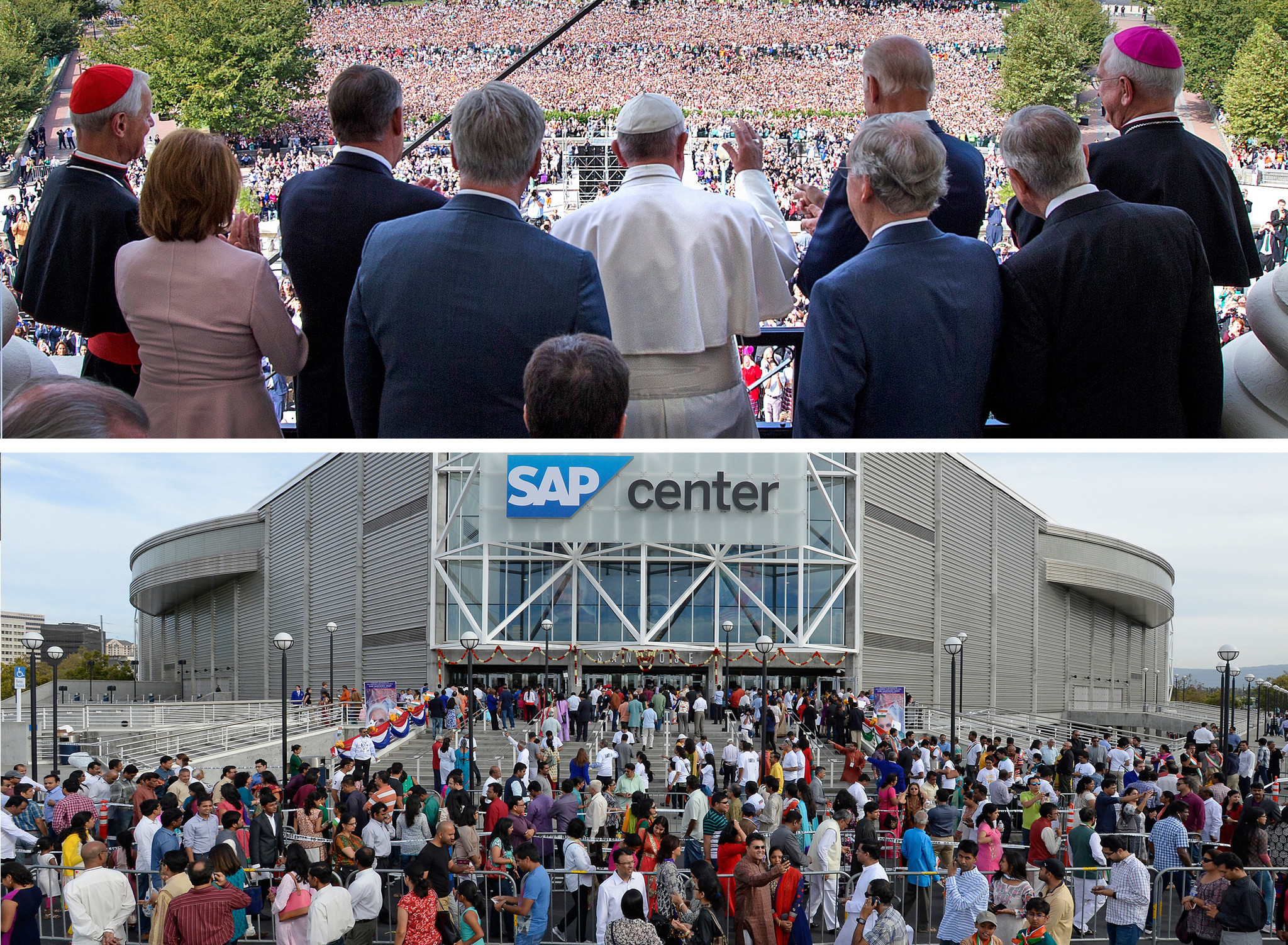 Organizers estimated that about 1 million faithful would turn out to see Francis celebrate Sunday Mass on the Benjamin Franklin Parkway in Philadelphia. Days earlier, about 80,000 lottery winners lined Central Park in New York City to await his arrival.

On Sunday, Modi spoke at a "town hall" event at the SAP Center in San Jose, Calif., attended by an estimated 18,000 people, many of them Indian Americans.

Both men lead more than 1 billion people each worldwide. There are an estimated 72 million U.S. Catholics, and more than 2.8 million Indian Americans live in the U.S., according to U.S. Census figures.

Modi spent a good deal of his time in the U.S. on the West Coast, meeting with California Gov. Jerry Brown in San Jose on Sunday to discuss climate change as part of his swing through the Golden State.

The pope, on the other hand, kept his travel to the East Coast, even as he celebrated a Mass to canonize Father Junipero Serra, who founded several of California's 21 missions and became the first saint canonized on U.S. soil. (Over the weekend, just days after Serra was canonized, vandals struck the Carmel Mission where the remains of the missionary are buried, toppling statues and damaging gravesites.)

Both Francis and Modi invoked the names of peaceful leaders in their discussions of climate change.

Quoting Mahatma Gandhi, whom he called "that towering personality of our times," Modi said, "We must care, too, for that future world that we ourselves will not be able to see." Speaking at the United Nations Sustainable Development Summit last week, Modi said that climate change must be a priority, but that changes must be made with an eye to how they affect the poor.

The pontiff also spoke about how climate change affects the world's poorest, saying they "suffer most from such offenses," and speaking of a "true right of the environment."

"They are cast off by society, forced to live off what is discarded and suffer unjustly from the consequences of the abuse of the environment," Francis told the United Nations General Assembly. "They are part of today's widespread and quietly growing 'culture of waste.'"

The pope invoked the name of Martin Luther King, borrowing words he spoke in his "I Have a Dream" speech. "We can say that we have defaulted on a promissory note and now is the time to honor it," the pope said.

The pope made John Boehner cry, while Mark Zuckerberg left Modi in tears

The pontiff's visit inspired many faithful to weep openly in Mass and on the streets. Possibly the most prominent person to be visibly moved during Francis' visit was outgoing House Speaker John A. Boehner, who wiped away tears in the presence of the Roman Catholic leader.

Modi, on the other hand, became emotional during a question-and-answer session with Facebook's Mark Zuckerberg. Responding to a personal question from Zuckerberg about the influence of Modi's mother on his life, the prime minister's voice cracked with emotion. "I came from a very poor family,” he said. “When we were young, what we did to get by … she went to our neighbors’ houses nearby [to] clean dishes, fill water, do hard chores. So you can imagine what a mother had to do to raise her children." 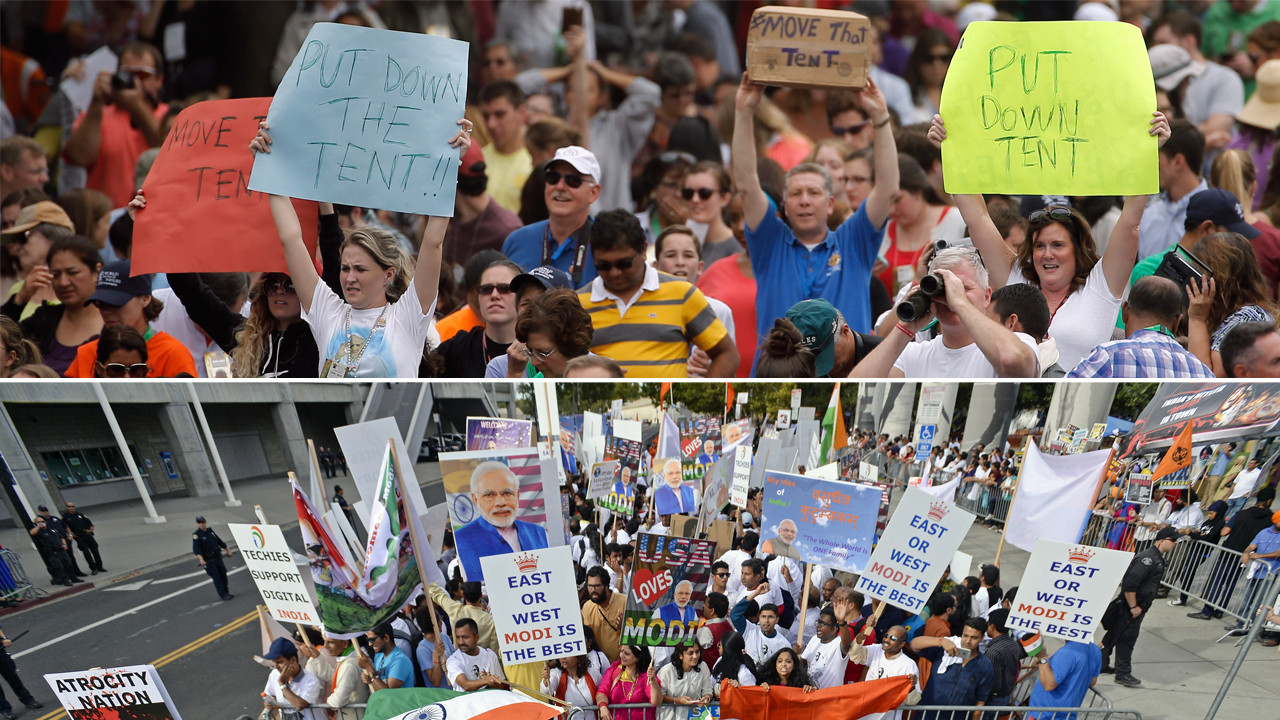 A group of protesters gathered outside the SAP Center in San Jose in anticipation of Modi's speech. They held signs opposing the caste system and violence against minorities, accusing Modi of an "agenda of hate and greed." According to reports, one group even sent Zuckerberg 250 bottles of hand sanitizer, each with the name of a person killed in the Gujarat riots of 2002, encouraging the Facebook executive to "wash your hands" after shaking Modi's. Outside the SAP Center, the critics clashed with pro-Modi demonstrators who touted signs in support of the Indian prime minister.

Despite some who protested the canonization of Junipero Serra, who some said was responsible for enslaving Native Americans and punished them with whips and chains, no organized protests were present during the ceremony in Washington. Aside from a small group that held signs reading, "Pervert Pope" and "Catholic Priests Are Liars," few protesters followed the pontiff during his U.S. tour.

Except those, of course, who banded together to protest a tent. After a large white party tent was erected in front of the stage where Francis was scheduled to celebrate his public Sunday mass in Philadelphia, blocking the view of the anxious crowd, the crowd began chanting, "Move that tent!" and "Take it down!"

Hours later, after the outrage had drowned out singing and spawned the Twitter hashtag #takeitdown, organizers finally dismantled it.

On the role of women 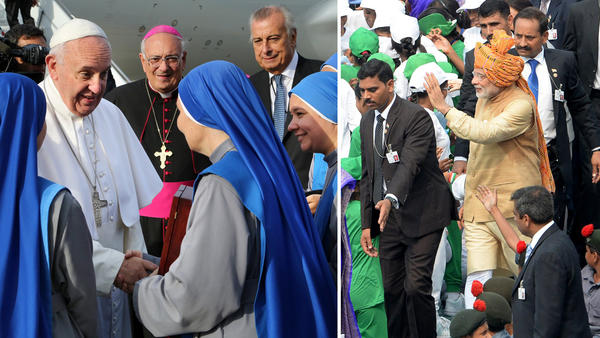 Asked about the role of women as Indian society grows, Modi said, “If we want to achieve our economic goals, then we cannot do that if we imprison 50% of our population inside their homes.” Modi spoke about the importance of educating young girls in India, and his campaigns to encourage families to send their daughters to school.

In a celebration at New York's St. Patrick's Cathedral, Francis extended what was seen as a partial olive branch to American nuns, who had been accused by the previous pontiff of diverging from the church's teachings. Francis called nuns "women of strength, fighters, with that spirit of courage which puts you in the front lines in the proclamation of the Gospel.” He added, “What would the church be without you?” to much applause. But the pope did not address how women could serve greater or more significant roles in the church, which some of his female followers have called for.