Since the 1966 epochal “Hell's Angels: The Strange and Terrible Saga of the Outlaw Motorcycle Gangs” helped cement the image of motorcycle clubs as a drug-addled danger to postwar society, the biker gang image has been largely defanged.

The Hells Angels are more likely to make news for suing the film “Wild Hogs” than the kind of drug-fueled bacchanalia for which they were once famous.

But Sunday's bloody confrontation in Waco, Texas, is a jolting reminder that some motorcycle gangs are still a violent force in some parts of the country.

“This is not a bunch of doctors and dentists and lawyers riding Harleys,” said Waco police Sgt. Patrick Swanton.

The Department of Justice has identified seven motorcycle clubs that it believes are highly structured criminal enterprises, many of them allied in one form or another against the best-known gang, the Hells Angels Motorcycle Club.

A Justice Department report classifies such organizations as outlaw motorcycle gangs, and federal law enforcement authorities are focused on their alleged drug activity and possible connections to Mexican cartels.

The Southern California-centered Mongols Motorcycle Club has earned a reputation for violence since taking Los Angeles area turf from the Hells Angels, according to the Justice Department.

“A majority of the Mongols membership consists of Hispanic males who live in the Los Angeles area, and many are former street gang members with a long history of using violence to settle grievances,” according to the report.

The Mongols have allied themselves with the Bandidos, Outlaws, Sons of Silence and the Pagans to compete for territory and members with the Hells Angels, the report says.

The Bureau of Alcohol, Tobacco, Firearms and Explosives says it considers the Mongols the most violent motorcycle club.

Photos of the Bandidos motorcycle gang are shown here. (U.S. Department of Justice)

The 900-member Bandidos Motorcycle Club is one of the two largest operating in the U.S., according to the Justice Department. The Bandidos are centered in the West and South.

“The Bandidos are expanding in each of these regions by forming additional chapters and allowing members from supporting clubs, known as ‘puppet’ or ‘duck’ club members,' to join,” according to the Justice Department report.

Such members wear the colors and patches of a small local club but do the "dirty work" of the larger "mother club," the government said. The smaller clubs can eventually become a new chapter of the larger club, in this case, the Bandidos. 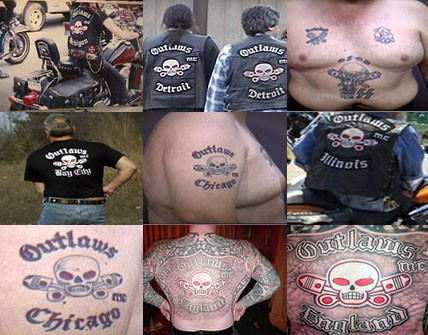 Photos of the Outlaws Motorcycle club are shown here. (U.S. Department of Justice)

The Outlaws Motorcycle Club has 700 members in 86 chapters and is centered in the upper Midwest, where they compete with Hells Angels for members. Some Outlaws chapter members have been accused of murder and kidnapping, and federal authorities say they believe much of the club's money is generated through the manufacture and distribution of methamphetamine.

The Outlaws’ “support club,” the Black Pistons MC, was established as recently as 2002 but quickly expanded across the U.S. and into Europe. “The Outlaws also use the Black Pistons chapters to conduct criminal activity, especially for the transportation and distribution of drugs,” according to the federal report. 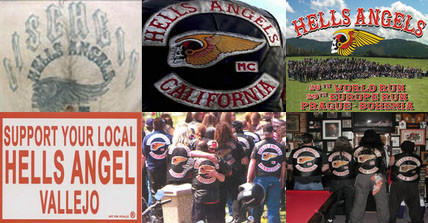 The best known motorcycle club may no longer be the largest. The Hells Angels has 800 members and the Justice Department says it suspects that some members are leading extortion rings, committing murders and moving drugs. 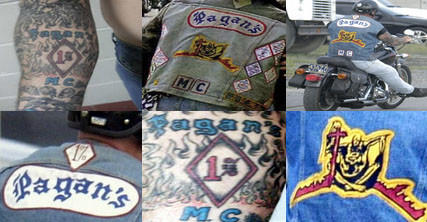 The emblem of the Pagans Motorcycle club is shown here. (U.S. Department of Justice)

Primarily concerned with trafficking cocaine, methamphetamine and PCP, the smaller Pagans Motorcycle Club has 200 to 250 members who operate in 11 Mid-Atlantic states, according to the Justice Department.

The Pagans are tied to criminal enterprises in Pittsburgh and Philadelphia, and are connected to extortion rings, arson and murder, the government says.

The emblem of the Sons of Silence Motorcycle club is shown here. (U.S. Department of Justice)

The emblem of the Vagos Motorcycle club is shown here. (U.S. Department of Justice)

Operating on both sides of the U.S.-Mexico border, the Vagos Motorcycle Club is active in the West and Southwest. Primarily concerned with the production and distribution of methamphetamine, Vagos members have also been charged with money laundering and insurance fraud, as well as more violent crimes, the Justice Department says. 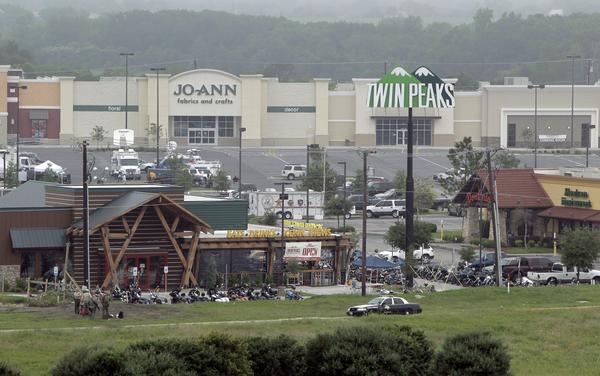 The Twin Peaks restaurant was the scene of a motorcyle gang shootout that left nine dead. The Cossacks gang was among as many as five gangs involved. (Erich Schlegel/Getty Images)

Though less is known about the Cossacks, one of the groups connected with Sunday's violence in Waco, they have a history with the Bandidos dating to at least 2013.

On Nov. 2, 2013, a fight broke out between the Bandidos and Cossacks motorcycle clubs outside Logan’s Roadhouse in Abilene. Five men were injured. A grand jury later indicted two men on suspicion of assault. One of them was the leader of the Bandidos.

The Cossacks were not cited in the Justice Department report.

Nigel Duara covered the border for the Los Angeles Times, based in Tucson, until 2017. A Miami native, Duara was previously a reporter for the Associated Press in Portland, Ore. He is also a veteran of the American Middle West, with stints in Iowa City and Des Moines, Iowa. He graduated from the Missouri School of Journalism.