Los Angeles could use a good chiropractor.

Imagine unfolding yourself from the driver’s seat after a daylong road trip. Your joints ache. Your feet cramp. Knots and kinks turn up in the damnedest places.

So it is with L.A.'s collective transit musculature — only imagine getting out of your car after a hundred-year drive. That should give you some idea just how much transportation pain our city is really in.

We’ve started working out some of the kinks with light rail, bike lanes, express buses and subways. But there’s more to unknot. Here are four regional “joints” that need imaginative attention. Arranged here roughly in ascending order of ambition, these quixotic fixes might just ease the aches of a too-often disconnected metropolis. 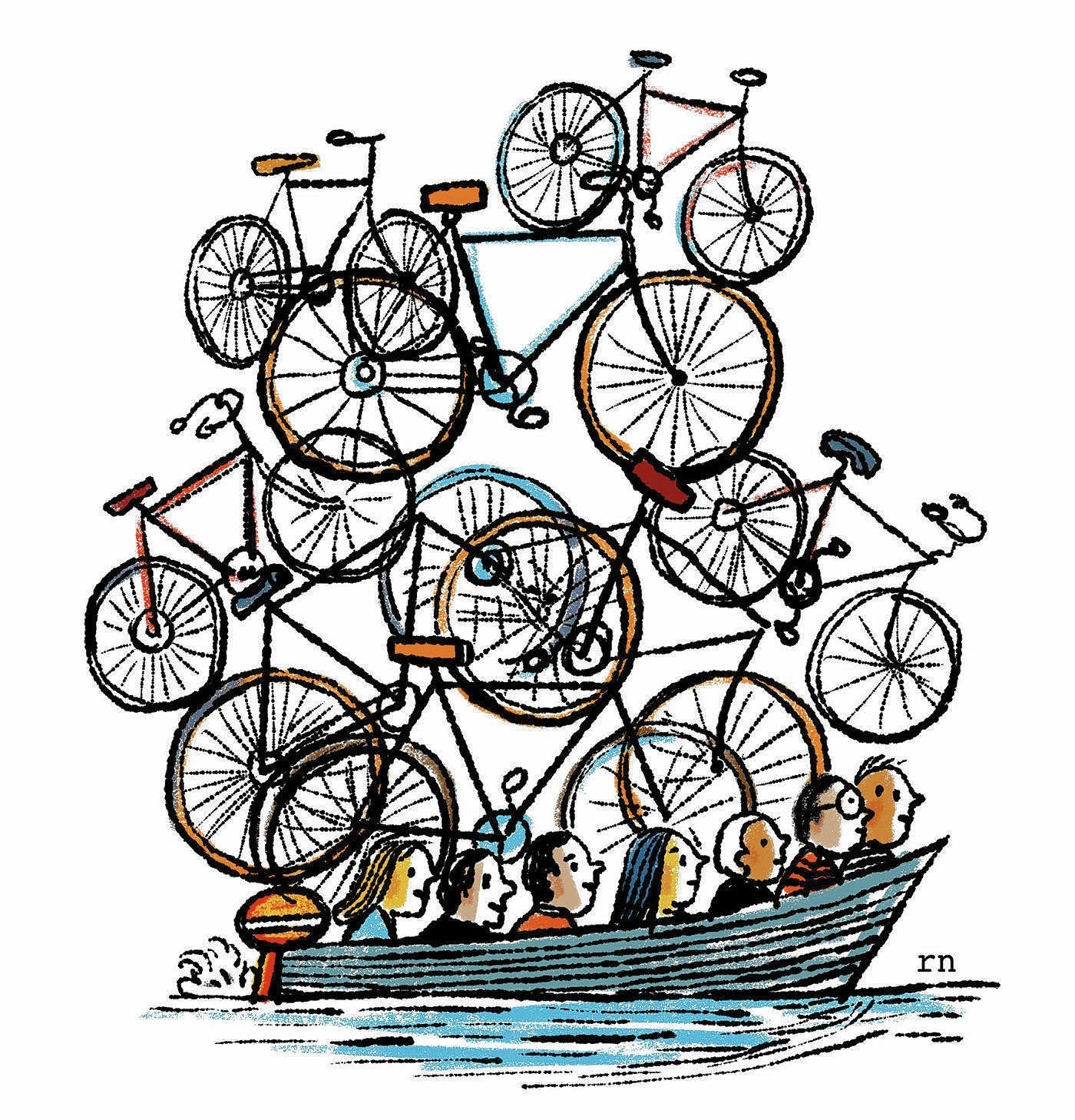 The Marvin Braude Bike Trail along the beach, aka “the bike path,” is the secret freeway of Los Angeles. How else can you get anywhere between Pacific Palisades and the South Bay at rush hour — all without stopping, except for Small World Books and fish tacos, if you’re so inclined. There’s just one hitch: A yacht channel, one you could sail a Frisbee across without half trying, bisects the path at Marina del Rey and sends riders on a detour away from the beach, back onto surface streets.

A bicycle ferry across the “Del Rey Straits” would make possible an unbroken 20-mile oceanfront bike ride between Will Rogers State Beach and Palos Verdes. All it would take is an experiment that coastal towns like Martha’s Vineyard have helpfully piloted for years: a simple, Evinrude-powered bike ferry.

Even with liability insurance and dock construction costs, if you charged a dollar at peak hours, this one would surely pay for itself by Labor Day. Why not name it after Ray Bradbury — whose “Fahrenheit 451” is L.A.'s citywide Big Read pick this spring, by the way — and who went carless in L.A. long before it became a fashion statement?

The Scullywalk, or Dodgers Flight A year-round walkway between Chinatown and Dodger Stadium would help link up an increasingly crowded downtown with L.A.'s most beloved — yet most bike- and pedestrian-unfriendly — public shrine.

Half the Scullywalk already exists. It takes only about 12 minutes to walk from the pagoda-like Chinatown Metro Station to the Pasadena Freeway at Yale Street and cross an existing pedestrian bridge over the 110. All that’s required are Dodger-blue footprints painted along the route to show us the way. Once over the 110, however, the city would need to spring for a gentle flight of steps up the scrubby hill to Blue Heaven.

Taking the Scullywalk on a game day could well be faster than waiting around for the Stadium Express from Union Station. A salubrious amenity like this might become a downtown version of Santa Monica’s jogger-clogged Adelaide Drive steps, with Dodger baseball at the top at least 81 times a year.

Mayor Eric Garcetti has spoken movingly about what Vin Scully means to Los Angeles, and of our need to honor this modest man’s outsize gift to Angelenos these past 60-odd years. How about we create a lasting monument to the true voice of Los Angeles — and, at the same time, devise a way to get out of our bucket seats and onto our feet?

By the end of the decade, the Downtown Regional Connector project should all but eliminate the need to change Metro Rail trains downtown. It will create a no-transfer option between Azusa and Long Beach and between Santa Monica and East L.A. But the efficiency that the DRC will provide for some travelers, it takes away from others.

The DRC will sever the current Gold Line route, which curves from the San Gabriel Valley around to East L.A. The Eastside students who use it to get back and forth to Occidental and Pasadena City College, the Highland Park denizens headed for Mariachi Plaza, and folks in East Los who just want to go to Union Station and vice versa, will all have to disembark and change trains under the new configuration.

Luckily, it doesn’t have to be this way. The answer? A Y-shaped junction, a simple fork in the route, that would allow Metro Rail to keep some trains running along the original Gold Line curve as well as the new route. There’s nothing exotic about it. Such “wye” junctions (that’s the proper term) are a feature of railroads everywhere. Metro could name the one in Little Tokyo after Fred Y. Oyama, whose lawsuit before the Supreme Court helped win former Japanese American internees the right to own property.

Yes, adding a “wye” junction would increase the DRC’s construction budget, but it would hardly be the first change order on the project. If there is funding available to make design changes to accommodate pipes and wiring — which is already happening — there ought to be a way to accommodate legions of daily Gold Line riders.

Gov. Jerry Brown wants Californians to look forward to the late-2020s advent of high-speed rail with something other than their current stingy skepticism. If L.A.'s 2024 Olympic pitch fails, why not stretch the campaign northward and create a statewide Olympic bid for 2028? Beach volleyball in L.A.! Rowing on the San Francisco Bay! In Fresno ... hmmm. Bear-baiting? There’s no Olympic event that the host state of California couldn’t stage.

Down the decades, the internecine rivalry between Northern and Southern California has opened a chasm far wider than the one separating the Marina from Playa del Rey, or Chinatown from Dodger Stadium, or the one scheduled to sunder Union Station from Boyle Heights. This irrational enmity between north and south has weakened everything from California’s political clout, to our energy infrastructure, to our pride in the Golden State’s manifest superiority over every other pathetic state in the union. A Pan-California Olympics up and down the high-speed rail route would go a long way toward bridging this disastrous divide.

With or without all these tweaks, on March 5, L.A. transit geeks like me will rise at daybreak to explore the first of 20 brand-new light-rail and express-bus stops slated to open this spring. Train-riding chowhounds can soon compare dim sum in two different Chinatowns on the same day. Before long, riders from downtown will finally get to wiggle their toes on the beach in Santa Monica.

After these triumphs, the four fixes above should be a snap. We’ve been stuck in traffic for a century. Aren’t Angelenos — and the city we love — about due for a massage?