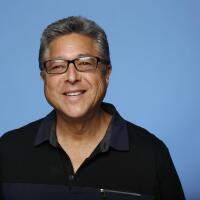 Genaro Molina is an award-winning staff photographer for the Los Angeles Times. He has worked in journalism for more than 35 years starting at the San Francisco Chronicle. Molina has photographed the life and death of Pope John Paul II, the tragedy of AIDS in Africa, the impact of Hurricane Katrina, and Cuba after Castro. His work has appeared in nine books and his photographs have been exhibited extensively including at the Smithsonian Institute and the Annenberg Space for Photography.