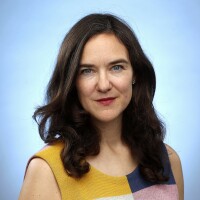 As deputy managing editor for entertainment, audio and strategy at the Los Angeles Times, Julia Turner runs coverage of culture and the entertainment industry. She also oversees the newsroom’s podcasts and works with newsroom leadership to develop and implement editorial strategy for the paper.

Before joining the Los Angeles Times in November 2018, Turner was the editor-in-chief of Slate. During her four years in that role, she expanded the online magazine’s audience, its podcast network, and its membership program, and the journalism Slate published earned numerous accolades, among them a Polk Award for “Sixteen Shots,” Jamie Kalven’s investigation into the killing of Laquan McDonald by Chicago police and a National Magazine Award for “Slow Burn,” Slate’s history podcast.

Turner first joined Slate in 2003, and also served as deputy editor, as culture editor, and as a reporter and critic covering television, media and design during her time there. For more than a decade, she’s also been one of the co-hosts of the Slate Culture Gabfest podcast.

Born in Boston, Turner is the daughter of two journalists who met working at the Boston Globe. She graduated from Brown, where she studied history, and got her start at Time Inc., where she worked first in magazine development and then at Sports Illustrated Women.