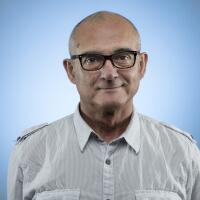 Brazilian native Ricardo DeAratanha traveled the world with his camera before joining the Los Angeles Times in 1989. He participated in several book projects: “A Day in the Life of California,” “A Day in the Life of Italy,” “The Jews in America,” “One Earth” and “In Pursuit of Ideas.” He was part of the teams covering several breaking news events, including the Los Angeles riots, the Northridge earthquake and the North Hollywood bank shootout, which were honored with Pulitzers.