D.C., Sacramento and Beverly Hills: Here’s where the big money in L.A.'s congressional election came from

In the race to become Los Angeles’ next congressman, two Democrats are furiously raising money from very different corners. State Assemblyman Jimmy Gomez and attorney Robert Lee Ahn will face each other in Tuesday’s runoff for the 34th Congressional District.

A look at the latest fundraising figures reveals where they’re drawing support from and the advantages each has going into election day:

Since the April primary, Ahn and Gomez have raised roughly the same amount from donors

Robert Lee Ahn surprised many when he reported strong fundraising totals ahead of the crowded April primary election. Since making the runoff, Ahn has kept his fundraising numbers up and has more or less evened the financial playing field between him and Gomez. That’s notable, considering Gomez is a three-term legislator with plenty of political connections and had more than a month’s head start in campaigning.

Ahn has loaned himself half a million dollars, pushing him over the top

While Ahn, a relatively unknown candidate before this race, has lagged somewhat in fundraising, he’s more than made up for it with his own money.

Ahn loaned himself $295,000 in the primary campaign and added $195,000 ahead of the runoff. This has given Ahn a major cash advantage, and he seems to be spending nearly all of it.

Ahn has spent most of his money on printing, envelopes and other costs associated with his controversial mailers and has also spent significant amounts on consultants and promotional items such as notepads, Mardi Gras beads and potholders.

Gomez has spent nearly half his money on printing and mailer costs, and other big chunks on political consultants and workers walking the district to talk to voters.

Neither candidate has spent much on ads, with Ahn running them mainly on Korean TV and radio stations and in Korean-language newspapers. Gomez spent a modest amount on ads in the Los Angeles Times and on text message advertising.

With dozens of endorsements from members of the Democratic Party establishment, Gomez has raised significant sums from major donors, including from political action committees run by labor unions and trade organizations. All told, about 40% of Gomez’s total contributions are from political committees, candidate campaigns and other organizations, according to a Times analysis.

Some of Gomez’s biggest donors include the political advocacy wings of large national unions, including the American Federation of State, County and Municipal Employees and the Service Employees International Union. Committees controlled by business groups such as financial services firm Ernst & Young and the National Assn. of Realtors have also given big to Gomez.

Ahn has frequently criticized Gomez for taking money for his Assembly campaigns from private prison firms, payday lenders and pharmaceutical companies, claiming that it will be “payback time” for Gomez’s supporters if he is elected. Ahn has told voters his donor list is filled with “individuals just like you.” Ahn has received just 1% of his sum from political committees and other organizations. But about 80% of the money he has raised comes from contributions of $1,000 or more.

Many of Ahn’s donors appear to be coming from the Korean American community, which has been energized by the prospect of electing the first Korean American to Congress in nearly 20 years. According to a Times analysis, at least $330,000, or more than 37%, of Ahn’s money came from donors with Korean surnames.

Neither candidate has raised a significant amount of money inside the 34th Congressional District, where nearly half of households earn less than $35,000 a year. A Times analysis shows that more than three-quarters of both candidates’ funds have come from ZIP Codes outside the district.

While Gomez has tapped into money in Washington, D.C., and Sacramento, Ahn has reached out to wealthier parts of L.A. County and Southern California to build up his coffers.

Ahn, on the other hand, has raised less than 10% of his $874,000 from outside California. But donors in ZIP Codes from the wealthy enclaves of Beverly Hills, La Cañada Flintridge and the Palos Verdes Peninsula have helped Ahn make up the difference.

Inside the district, Gomez’s main foothold is in northeast Los Angeles, which is part of the state Assembly district he currently represents. Ahn has strong fundraising in Koreatown, where he’s received more than $130,000 of his money, according to a Times analysis. 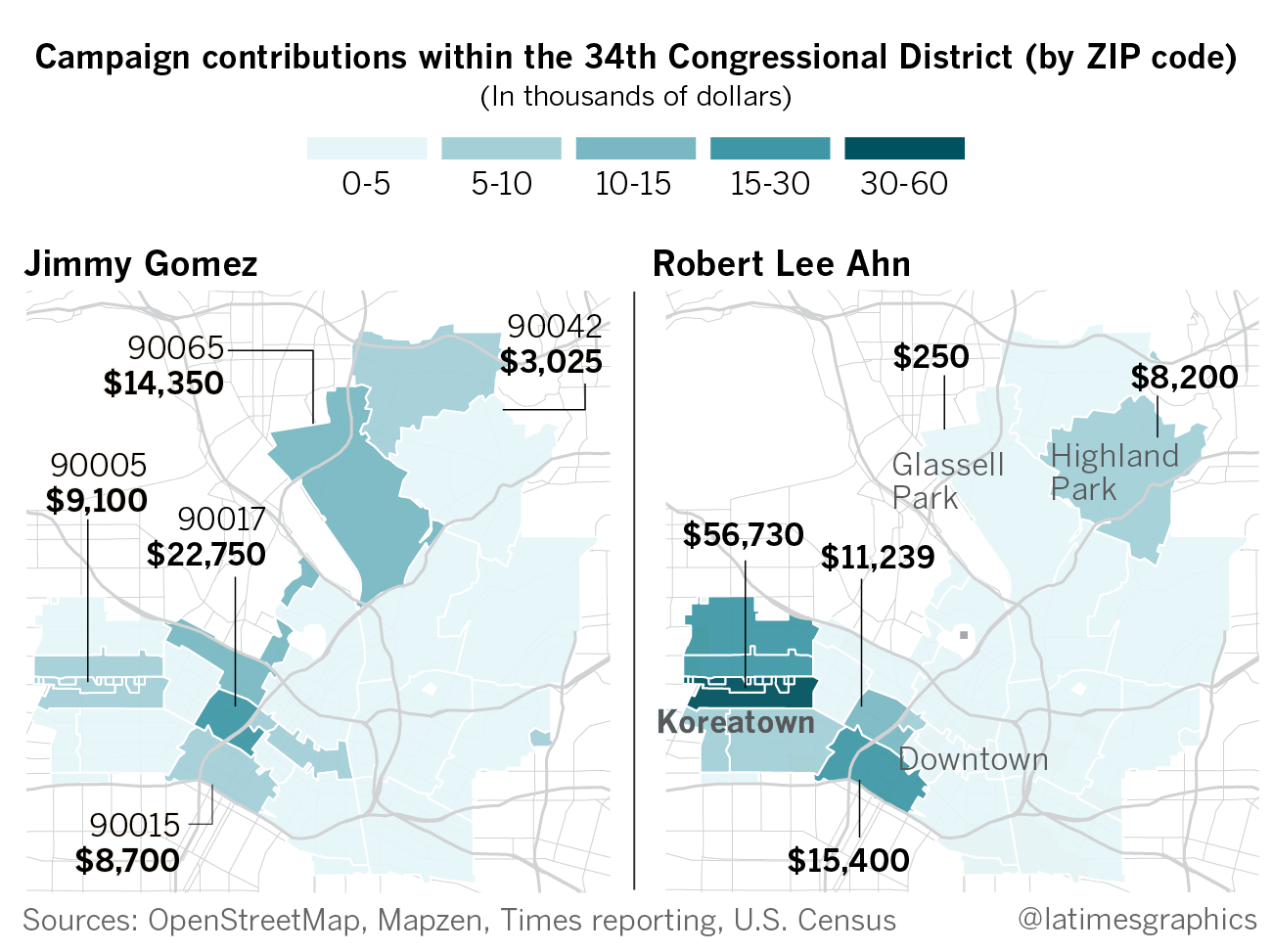 Outside money is spilling into the race, too

While the 34th District race hasn’t gotten nearly as much attention or money as more competitive House races in Georgia and Montana, outside groups have been dropping more money in recent days in hopes of swaying the outcome.

As of Wednesday, more than two-thirds of the money spent by independent expenditure committees, which by law must remain separate from candidates’ campaigns, has gone to support Gomez.

The Latino Victory Fund, which aims to elect Latino officials, has spent $239,490 on mailers, phone banking, canvassing and online advertising in support of Gomez. The American Federation of State, County and Municipal Employees has also spent $16,530 on phone banking and mailers for him, while the Los Angeles County Federation of Labor reported spending $25,180 on mail to its members to support Gomez.

A group calling itself the Middle Class Values PAC has spent $31,035 on mailers for Gomez despite not having reported receiving any major contributions so far this year. Gomez has also benefited from $9,230 in advertising from billboard company Outfront Media.

Citizens for a Better Government, funded primarily by two Ahn donors, has spent $99,620 on mailers, data and canvassing to support him.

Late-arriving money will keep the campaigns rolling through election day

A broad array of groups representing unions and businesses in the nation's capital are backing Assemblyman Jimmy Gomez.

The businessman and former L.A. city planning commissioner has relied on heavy support from Koreatown and weathy enclaves in other parts of the county.

Maloy Moore is a former researcher and reporter at the Los Angeles Times.

Ryan Menezes worked on the Los Angeles Times Data and Graphics team. A graduate of UCLA with a degree in statistics, he analyzed data, wrote stories, crafted visualizations and tackled various journalistic problems with the help of code. He left The Times in 2021.