With California's June 7 primary election suddenly crucial to the Republicans hoping to win their party's presidential nomination, attention is shifting to the Golden State. But despite the competitive, high-stakes race, few Republicans in California's congressional delegation publicly back a candidate at this point.

Only three of the 14 Republican members have endorsed candidates. Some haven't supported another candidate after the person they endorsed dropped out. Others, including House Majority Leader Kevin McCarthy (R-Bakersfield), haven't announced who they will support, saying they are waiting for voters to pick the nominee.

But after Bush ended his campaign following a poor showing in the South Carolina primary, Walters shifted her support to Florida Sen. Marco Rubio.

When Rubio dropped out of the race following a loss in Florida, she decided not to endorse again, her staff said.

Valadao and Denham, Republicans in districts that could favor Democrats in a general election, now say they don't plan to endorse again ahead of the primary.

Rep. Darrell Issa (R-Vista) endorsed Rubio, calling him an "exciting candidate" who has been "fighting for a lot of things I believe in."

After Rubio dropped out of the race, Issa's staff said he didn't plan to endorse again.

Rep. Devin Nunes (R-Tulare) is staying neutral during the primary, he said, because he'll have to brief the eventual nominee in his capacity as chairman of the House Intelligence Committee.

"You can throw anything at him and he has an informed, reasoned, eloquent answer," LaMalfa said in a phone interview. "I think he can go toe to toe with anyone [Democrats] decide to put up. He has my confidence."

“I’m done. I’m already 0-2,” LaMalfa said. “The voters are the ones deciding so, we’ll let them keep deciding.”

"Under Ted's leadership we can put America back on the right track. Ted has more foreign policy experience than Ronald Reagan did when he became president. But he has the same focus on what's in the best interest of the American people," he said in a statement.

On the other side, Democrats in California's delegation have exclusively lined up in support of former Secretary of State Hillary Clinton's 2016 presidential bid.

The former senator and first lady has had the support of many congressional Democrats sewn up since the summer, and at least 83% of California's Democrats support her. With voting in primaries and caucuses underway, 32 of California's 39 House Democrats and both of the state’s senators have endorsed Clinton. Seven Democrats, including Minority Leader Nancy Pelosi (D-San Francisco) have not yet made endorsements.

LEARN MORE about the delegate process >>

So-called "superdelegates" were a major factor during the 2008 nominating contest, with Clinton amassing an early lead among her congressional colleagues and national Democratic officials who participate in party conventions. But then-Sen. Barack Obama won over influential members of the party and ultimately had enough delegates to become the nominee.

That year, Pelosi stayed on the sidelines during the primaries. She's doing the same this year, but has said nice things about both Clinton and Sanders.

Then-Senate Majority Leader Harry Reid held off endorsing Obama until June, when the nomination was all-but decided. After the Nevada Caucus in February, Reid endorsed Clinton.

Tracking congressional superdelegates became something of a sport.

In California, 11 of the then-34 Democrats in the delegation were with Clinton. Two members, Pelosi and Rep. Michael M. Honda (D-San Jose), made no endorsements and the others were with Obama. Some switched their endorsement to the then-Illinois senator when he secured enough delegates to defeat Clinton.

Of the California Obama backers who remain in Congress, nine have now shifted support to Clinton. But four have not made any public pronouncements or did not respond to requests for comment.

House Democratic Caucus Chairman Xavier Becerra (D-Los Angeles) said after knowing her for 20 years, he thinks no one in the race is as prepared as Clinton.

"You want someone who has been there and done that and knows how to do it," Becerra said. "To me she is head-and-shoulders above the rest."

Becerra, who endorsed Obama early in 2008, said he has campaigned and spoken on Clinton's behalf as a surrogate, "as often as I can," squeezing in stops at county Democratic Clubs in Iowa or talking to reporters backstage after the Democratic debates between working in his district or Washington. We tracked him in Las Vegas as he helped get out the vote for Clinton.

"It's daunting, but it's essential," he said.

Rep. Doris Matsui (D-Sacramento) said they met when she worked in the Clinton White House as a deputy assistant to President Clinton. Matsui said she was drawn to the then-first lady's interest in women and children's issues.

"She was remarkable in her commitment and her attitude about those issues, which really drove her," Matsui said. "Her head and her heart were always there."

They arrived in Washington the same year, Boxer's daughter was married to Clinton's youngest brother, and the two women later worked together in the Senate. Boxer said she encouraged Clinton to accept the position as secretary of State.

"We've had a very special relationship," the senator said last week. "I've watched her grow. Her candidacy is historic, it is historic on so many levels."

READ MORE about the 55 members of California's delegation >> 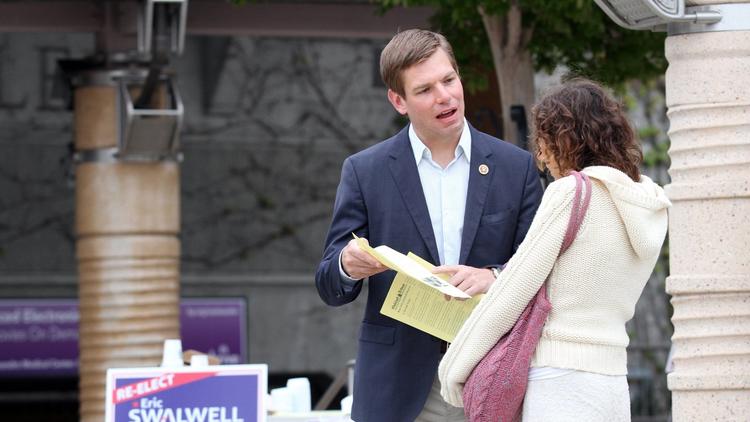 Rep. Eric Swalwell (D-Dublin) was the only Democrat in California's delegation -- or any delegation for that matter -- to endorse former Maryland Gov. Martin O'Malley.

Swalwell met O'Malley as a University of Maryland student and volunteered on the Democrat's campaigns for mayor of Baltimore and later as governor.

"Most of my adult life I've been connected with him," Swalwell said late last year. "I almost took the bar and stayed in Maryland hoping to join the O'Malley administration."

He said at the time he was not worried about political ramifications of not supporting the front-runner, and he will work hard for whoever becomes the Democratic nominee.

"I'm worried about what it would say about me if a friend and a mentor who is qualified to be president asked me for support and I didn't" give it, Swalwell said. "Right now I'm with my friend."

"Many in the campaign knew of [my] personal friendship with Gov. O'Malley," Swalwell said. "I really admire Secretary Clinton and will do everything I can."

Though Vermont Sen. Bernie Sanders has consistently brought in large crowds as he continues to battle with Clinton, he's only secured a handful of congressional endorsements. The first were from Reps. Keith Ellison (D-Minn.) and Raul Grijalva (D-Ariz.). No Californians have stepped forward.

Huffman told the Los Angeles Times he watched the race unfold for several months, listening to what the candidates said about the Keystone XL Pipeline, trade and gun violence as he made up his mind.

"I just became very comfortable with Secretary Clinton's positions and always very impressed with the way she had put her campaign on a very firm footing."

He said he was encouraged by friends and constituents to support Sanders, and even traveled to Chile with the senator in 2014.

"I've always liked Bernie. Bernie has a lot of moral clarity and consistency," Huffman said. "As much as I think [of] Bernie and I recognize him as a thought leader, I think it's only fair to acknowledge he's got some electability issues. It would be an uphill fight, I think, for him to win a general election."

Rep. Mark DeSaulnier (D-Concord) said he went back and forth before deciding to support Clinton, calling her "the most prepared person in my life time" for the presidency.

"A lot of what Bernie is saying is something that needs to happen. A lot of Americans and a lot of Californians feel that the system is rigged and that it shows in their pocket," DeSaulnier said. "I think Secretary Clinton has the same feelings despite some of the perceptions and that she’s prepared to go into battle. You've got to be strategic as well as passionate."

This list was compiled through conversations with members and their staff, news reports and social media statements. It will be updated as members make or change their endorsements. Members marked as none either have not endorsed a candidate, or it was unclear if they have. Send updates to sarah.wire@latimes.com.

Rep. Eric Swalwell (Dublin) Swalwell was Martin O'Malley's sole backer from the California delegation. He changed his support when the former Maryland governor dropped out.

This post was updated on March 17, Feb. 24, Feb. 14, Feb. 5 and Feb. 4 to reflect changes in endorsements and lawmakers choosing sides.