Angelina Jolie’s choice is clear to one who faced it

Her decision makes sense to others who’ve been there. We want to end the constant fear, and we don’t want our children to suffer the same loss we have. 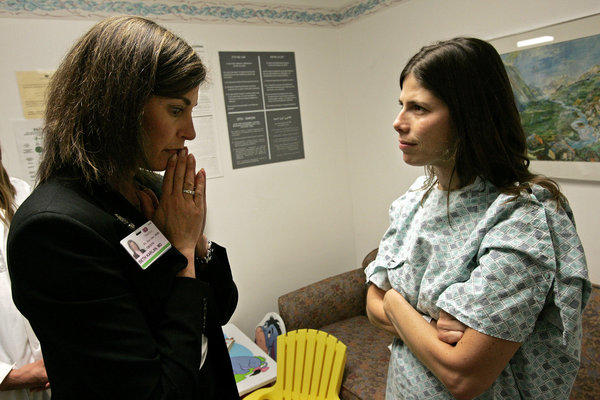 Her decision makes sense to others who've been there. We want to end the constant fear, and we don't want our children to suffer the same loss we have.

Fear of cancer is a horrible thing. It stays with you all day long, and it wakes you up at night.

I didn't want to live with that, especially when I knew I could do something about it.

Like Angelina Jolie, I have a genetic mutation that increased my odds of getting breast cancer to nearly 90%. Also like Jolie, I chose to get my healthy breasts removed to reduce that risk to less than 5%.

Today, nearly five years after my preventive double mastectomy, my scars have faded and I don't often think about what I went through. Most people aren't aware I had the surgery — I look the same, even in a swimsuit.

And my fear has all but disappeared.

Jolie and I took this drastic step for the same reasons: Both of us lost a parent to cancer brought on by this horrible mutation, and neither of us wanted our children to suffer the same loss.

"I can tell my children that they don't need to fear they will lose me to breast cancer," she wrote Tuesday in a newspaper op-ed piece.

Everyone has the BRCA1 and BRCA2 genes, but only some of us have mutations that make us more likely to develop certain kinds of cancer, including breast and ovarian. About 750,000 people in the U.S. carry the mutations. Genetic testing for the mutation, which can be passed down by either mothers or fathers, began in the late 1990s.

I found out I was BRCA1 positive when I was 28. I got it from my father, who died in 2005 from pancreatic cancer when he was just 59. His death came just a few weeks after my older daughter, Sadie, was born. My youngest daughter, Twyla, was born the next year. 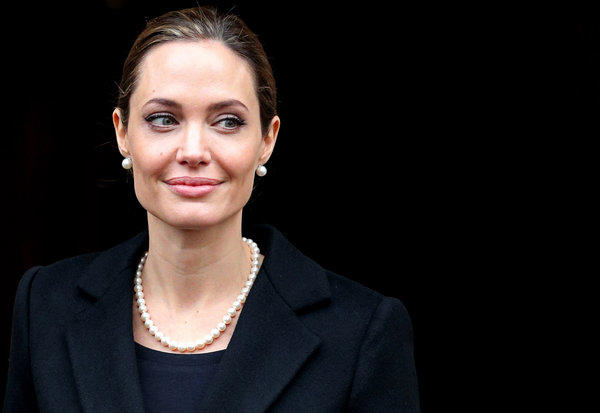 Actress Angelina Jolie revealed in a New York Times op-ed piece that she recently underwent a preventive double mastectomy and reconstructive surgery. Jolie noted in the piece that she carries the BRCA1 gene that increases a woman's risk for breast and ovarian cancer. Her mother, Marcheline Bertrand, died of ovarian cancer in 2007 at 56. (Oli Scarff / Getty Images) More photos

In 2007, I wrote a story here about my journey being BRCA positive. I described how desperately I wanted to get married and have children but didn't know if cancer would strike before I got the chance. I shared how my father held my newborn daughter and told me his dying wish: that I get my ovaries removed so I wouldn't get ovarian cancer. And I wrote about my race to get pregnant with Twyla before my self-imposed deadline to get surgery.

I told the intimate story about my health, my marriage and my emotional journey to becoming a mother — and I am writing this story today — because I think it's important. If I can inspire one woman to get tested, or to be proactive about her health, then telling my story is worth it.

Even though I wrestled with the decision to have my breasts and ovaries removed, for me, the risks were just plain scary: about 87% for getting breast cancer and up to 50% for ovarian cancer. I wanted to be able to tell my children, too, that I wouldn't die young like Grandpa Ira had.

And I wanted to be able to celebrate Mother's Day without worrying about my health or about future Mother's Days.

The decision to get prophylactic surgery is a difficult one, and it is a very personal one. It is often influenced by a woman's age, family history and individual experiences, said Dr. Beth Karlan, director of the Women's Cancer Program at the Samuel Oschin Cancer Institute at Cedars-Sinai Medical Center.

Karlan, who treated Jolie's mother and is also my doctor, said Tuesday that some of her patients are already being affected by Jolie's revelation. 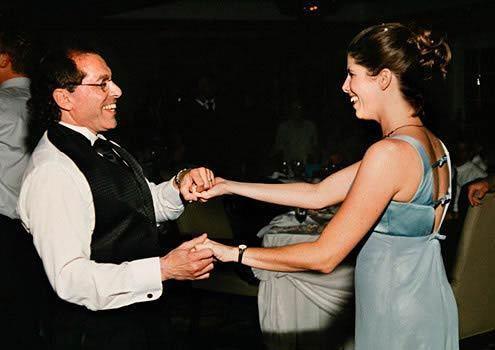 Anna Gorman with her father, Ira Gorman, at his wedding in 1999. Anna inherited from him the BRCA1 genetic mutation that dramatically increases the risk of certain types of cancer, including breast and ovarian. He died at 59 of metastatic pancreatic cancer, influencing her to have preventive surgery. More photos

"Life is not perfect just because you have beauty and money and talent and Brad Pitt," she said. "We are all human and we all have foibles. But acting on those things we can act upon allows us to live our life to its fullest."

Jolie wrote in the New York Times that she started with getting her breasts removed, implying that she may have her ovaries removed next. I did it the other way around. I had my ovaries removed in 2006, then had a double mastectomy and breast reconstruction a few years later. I was far more worried about ovarian cancer because it was more common in my family, and the survival rates were so much lower.

Although the oophorectomy was a relatively easy surgery, the mastectomy was difficult and emotional, and my recovery took longer than I had expected. Even after my wounds healed, I had to adjust to a new body, and in some ways, a new identity. I was fortunate and thankful to have my husband, Coll Metcalfe, and my family supporting me the entire time. I still am.

Life is not perfect just because you have beauty and money and talent and Brad Pitt."

Jolie is an international icon of beauty — and her disclosure doesn't change that. She was stunning before her surgery, and she still is. Even after the mastectomy, she wrote, she doesn't feel any less of a woman. Neither do I.

Most women feel a sense of relief after they make the decision and go through with the surgeries, said Joi Morris, who is on the national board of the nonprofit group FORCE: Facing Our Risk of Cancer Empowered, which provides education, support and advocacy for women with BRCA mutations.

"Once they make that decision, they just feel relieved and happy and that a burden has been lifted," said Morris, author of "Positive Results: Making the Best Decisions When You're at High Risk for Breast or Ovarian Cancer."

I won't say I felt happy — I wish I never had to deal with any of this. But I did feel like I could take a deep breath, and I could finally focus on the future.

Morris said she believes that Jolie's decision will open the minds of a lot of women struggling with whether to get tested and to consider having have their breasts or ovaries removed. "It has the potential to save a lot of lives," she said.

One of FORCE's members, Lindsay Perlman, lost her mother to ovarian cancer when she was 12. She learned last year, at the age of 30, that she had the BRCA mutation. 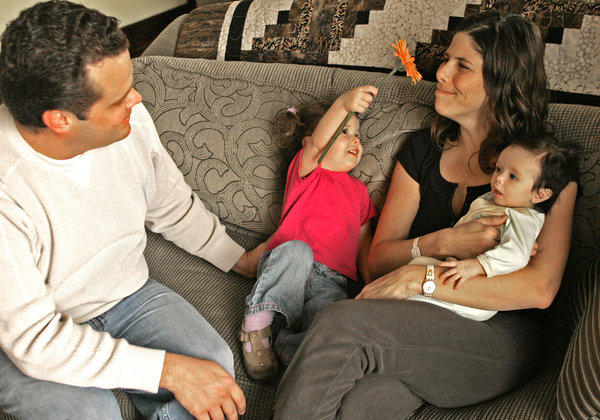 Back home after surgery, Anna cuddles daughter Sadie, left, and Twyla as husband Coll Metcalfe enjoys the familial scene. The couple planned their marriage and family around the knowledge of Anna's BRCA1 mutation and plans for the surgery. (Anne Cusack / Los Angeles Times) More photos

She said she wants to have both surgeries but doesn't know when. Hearing Jolie's story, Perlman said, "really helps me feel comfortable about taking the next step."

But Perlman, a casting agent in Los Angeles, said it's still scary. "You're cutting out healthy breasts," she said. "It's not anything I thought I would ever be facing."

I have done what I can do to reduce my risk of breast and ovarian cancer, though I still am at risk for pancreatic cancer. If I could get my pancreas removed too, I would. But instead, I undergo an invasive procedure each year to make sure there are no signs of cancer. Doctors have to knock me out to do it.

The BRCA1 and BRCA2 genes have been in the news over the last several years. TV medical dramas have taken up the issue, and books have been written. Earlier this year, the U.S. Supreme Court heard arguments about whether the BRCA genes can be patented — a case that could make genetic testing more affordable and accessible to women at risk.

When someone like Jolie writes about her personal experience with this deadly genetic mutation, it raises awareness about the experiences of so many women like me. It helps people better understand why we make these drastic decisions. It also encourages women with a family history of these cancers to talk to their doctors about genetic testing and possible preventive surgery.

But it also reminds me how little we know about BRCA and that researchers and doctors still have a long way to go — so that our daughters, and granddaughters, don't have to make the same choices to save their lives.

Sadie and Twyla are too young to know the full extent of our family history, or what they might face. They each have a 50% chance that they inherited the deadly mutation from me, but they won't get tested until they are at least 18. I try not to think about what those results may be.

Occasionally, my daughters ask me about my scars. I simply tell them that I had surgery so I can be their mommy for a very, very long time.

A sister reunites with siblings given up for adoption, but not for lost