Author and educator Temple Grandin sees the advantages that she and others with the disorder bring to the table.

The importance of being autistic

Temple Grandin, professor and author, speaks at a symposium in Fort Collins, Colo. She says she sees distinct advantages that she and others with autism can bring to society. (RJ Sangosti / Denver Post)

Author and educator Temple Grandin sees the advantages that she and others with autism bring to the table.

Temple Grandin nursed a half-cup of black coffee in the corner of a dim hotel restaurant, combing a newspaper for details with the mind that she calls her search engine.

She wore her customary starched cotton cowgirl shirt — black, its boxy shoulders embroidered in turquoise roses and leafy filigree. A Jersey cow smiled from a lacquered blue brooch in the shape of a puzzle piece, the emblem for autism customized with her other lifelong preoccupation: cattle.

The woman who can visualize how cows comprehend the world, who once was prone to rhythmically rocking and fits of screaming, calmly tucked her white scarf between snaps on her shirt. She had been waiting, 35 minutes now. Anyone else might have left, but Grandin ordered a coffee, a plate of sliced fruit, whipped cream on the side, and five bacon slices.

"I love bacon," she said when the order came, as if it would explain that she was, at least in this, like most everyone else. The neurotypicals.

Temple Grandin is anything but neurotypical. She has eight brain scans to prove it. Her cerebellum, which controls motor coordination, is 20% smaller than that of the neurotypical brain. The left side of her brain is so long it has pinched down the region that handles short-term memory. No wonder she can't follow several steps of written directions, or pass algebra.

Her visual circuitry extends well beyond where neurotypicals' circuitry stops. Grandin is wired for long-term visual memory. She is sure that one day, autism will be explained by neurobiology. Her new book, "The Autistic Brain," outlines that quest.

I offer her apologies and blame my delay on the massive reconstruction of the 405. It is a lame excuse. The mention of a construction project widens Grandin's light-blue eyes — a feature she shares with Claire Danes, who played her in the 2010 HBO biopic that has made Grandin famous enough that a man who describes himself as "Allen, a PhD mathematician," soon will walk over and tell her how much he admires her.

I have touched off the rapid-fire slide show in Grandin's brain, and now we will talk about abstract math, the meltdowns of Japan's Fukushima nuclear reactors, the faulty batteries that grounded the Boeing Dreamliner, Bill Gates and, finally, why the autistic brain probably could fix that construction on the 405.

Grandin has a doctorate in animal science. She never passed algebra in high school but she can design a cattle processing plant in her head. So she worries that the current rush to adopt a curriculum heavily focused on science, technology, engineering, math — STEM — will fail people like her.

"My kind of mind isn't going to graduate, and you need me," Grandin says. "Because my kind of mind is the one that would say, 'Hey, if you put the generators for the emergency backup for the Fukushima power plant in the non-waterproof basement, you're going to be in trouble.' I can't design a nuclear reactor, but there's no way I would've put those generators there unless I had reinforced walls, submarine doors you crank shut."

Grandin sees the plant layout as she speaks, adding the hand-cranked submarine doors gleaned from war movies, the pumps from every stockyard and farm she's seen since she was a child.

Her mind instantly sorts through scenarios like this. Take the Boeing 787 Dreamliner, grounded because of a fire hazard from its lithium-ion batteries. Her search engine would have pulled up images she had stored of cargo planes burning on the tarmac. Boeing should have had somebody with autism on the design team, she concludes.

Silicon Valley, she says, is practically run by "Aspies," as she calls those with Asperger's syndrome, a mild form of autism defined mostly by social deficits. Grandin sees Aspies everywhere — Allen, the PhD mathematician, she guesses, may be one.

Grandin knows she does not have a Silicon Valley mind. In 1968, she signed on to the same teletype machine that gave a young Gates access to a main-frame computer. The young Grandin stared at it, unable to write a line of code.

This is when she chokes up and cries.

Then Grandin moves on.

In her conversation, Grandin returned repeatedly to the subject of Japan's Fukushima nuclear power plant. Here, workers at the damaged facility in 2011. (Associated Press)

At 65, Grandin has learned many of the social cues that people with autism often miss, though her behavior is still rough-edged. She averts her eyes regularly. She is blunt. Her voice can grow loud.

She rambles, by her own admission, looping back to topics that interest her. STEM education comes back nine times; Fukushima comes up half a dozen; Boeing Dreamliner gets several encores.

"You take out some social circuits and get geek circuits, and that seems to be what happens, because the core deficit in mild autism is face blindness, which I have," she explains. "I don't recognize faces until I know people well."

Would she recognize me if she saw me again?

"If I had said, 'OK, dark-rimmed glasses, longish brown hair,' I would probably recognize you in here. But if I saw you in the street I might not."

Then again, she wouldn't remember this restaurant, either. It's just not interesting enough.

"OK, give me a key word — something really interesting, but not house, dog, car or cat, or something like that."

"Pipe wrench," I offer, my neurotypical mind landing on my weekend battle with a broken kitchen faucet.

She looks down at the table.

So you see, that's how I got from pipe wrench to my tool box to screwdriver, to a drink of a screwdriver."

"Pipe wrench — well, I'm seeing a pipe wrench and it's, the way it was jointed, when I was young I had a hard time figuring out how to work that," Grandin says. This was the 1960s, when autism was listed in the psychiatric handbook as an aspect of schizophrenia, and leading thinkers still blamed the disorder on emotionally distant "refrigerator moms."

"I'm now seeing a pipe I tried to screw with pliers that I totally wrecked because I didn't use a pipe wrench. Now I'm in pliers. Now I'm in my tool box going through other tools that I have.... It's a plywood toolbox that I built, a brown plywood color."

Grandin holds an imaginary spiral ratchet screwdriver that turns when the handle is pushed down. She jabs it into the table, right beside the whipped cream. Then she sees the bar in Chile where she had the flu, and wanted a screwdriver so she could go to sleep, and had to point to the orange juice (she lifts her left arm toward an imaginary bar) and the vodka (she lifts her right arm), and how she yelled, "SCREWDRIVER!" in English, which she also does now, drawing the gaze of nearby diners. Her eyes dart sideways.

"So you see, that's how I got from pipe wrench to my tool box to screwdriver, to a drink of a screwdriver."

There is a place for this kind of visual thinking, Grandin says. If she can find one — designing cattle-handling facilities to be more humane — this generation of autistic people can too. She is sure of it.

Grandin's prescription for children with autism, though, may not sit well with parents. Maybe it is the ranch upbringing, or her strict "1950s parents" who pushed her out of her comfort zone, but Grandin does not suffer the slightest hint of dwelling on autism.

Grandin, a professor of animal sciences, says she has trouble with algebra but can design a complete cattle-processing facility in her head. (Associated Press)

When she takes the lectern at downtown's Central Library that night to speak about her book, she is greeted like a star. But the audience, dominated by stressed mothers of autistic children, alternates between awkward silence and jittery laughter when she gets around to their questions.

One mother asks about her teen's hypersensitivity to sound. Grandin turns to the girl, sitting beside her mother.

"What about exercise?" she asks.

"I'm fine with the exercise I get; she's not," the girl replies.

"How much exercise do you get?"

"Not enough," the mom says.

"You have to do something that works you harder than that," Grandin says. "I do a hundred sit-ups every night on the bed."

"Thanks a lot!" the girl says.

"Every single night, and if I didn't do them I wouldn't sleep."

A fidgety boy comes down from the balcony to take the microphone.

"I have something I want to give you," Hunter Dotson says, a piece of paper shaking in his hand. "Remember when you said we needed more Internet access for the students? I have like a really simple fix for that."

"How would you fix that?"

"Build a GPS satellite that could provide WiFi anywhere on Earth."

Uneasy laughter rises from the audience.

"You see, autism is an important part of who I am, and I wouldn't want to change a thing and get cured, but being a college professor comes first. So go out and make that GPS WiFi system."

"You see, autism is an important part of who I am, and I wouldn’t want to change a thing and get cured," Temple Grandin told an audience in Los Angeles. (RJ Sangosti / Denver Post)

Grandin queries Hunter about math. He launches into video games. Grandin hates them, and laments a generation of autistic kids who she fears will collect Social Security and play games.

"You look old enough where you can start doing the grown-up stuff," she says.

"You're 10? You're old enough to do that. If you were living in Silicon Valley, you would be doing your parents' job already."

While signing books, Grandin again confronts Hunter, who says he has been banned from his school.

He averts his eyes.

"You can't say some things," says Grandin, who was kicked out of school for throwing a book at a girl who called her retarded. "You can't shout fire in a crowded building. That's one. And you can't say you're going to kill someone."

Next time, Grandin says, go somewhere and have a good cry — like she did, many times, in the macho world of cattle. "Geeks can cry," she advises.

Guards herd the last stragglers out of the closed library. Grandin is escorted out a side door onto 5th Street, where neurotypicals are heading home, leaving the darkening street largely to the homeless.

The turquoise embroidery of her shirt stands out in the street lights. The woman with the small cerebellum walks awkwardly in my direction, the escort beside her. I stop a few feet from her and say hello. I want to thank her for her time that morning.

"Ms. Grandin," I say. She takes my proffered hand, but says nothing.

Then she moves on. 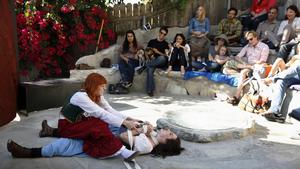 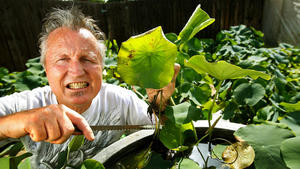 If you ever read the Bible, the fish and the bread growing like crazy, I'm that kind of guy when it comes to plants." 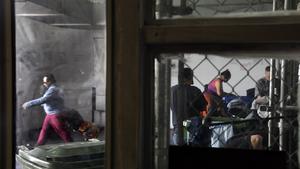