Great Alaska Earthquake 50 years ago today: What it taught science

Fifty years ago today, at 5:36 p.m., a magnitude 9.2 earthquake grabbed hold of south-central Alaska and started shaking. It didn’t cease for more than four minutes and was felt as far away as Texas and Louisiana.

Fissures split the ground, land slid above and below water, buildings cracked and folded in on themselves, tsunamis swamped coastal communities. In all, 143 people were killed -- crushed, drowned, buried. It was an epic tragedy, as well as a moment of clarity, however painful, for scientists.

Geologists and seismologists gathered an immense amount of information from the 1964 Alaska quake. The massive event proved a theory that was just then surfacing in seismology -- plate tectonics.

The Alaska quake was the first “properly interpreted” megathrust quake, the largest temblors on Earth, according to the U.S. Geological Survey. Megathrust quakes occur in subduction zones, where tectonic plates converge. When forces build up and those plates slip, the results can be catastrophic.

As the USGS details, an area of 185,000 square miles -- larger than California -- was disrupted by the Alaksa quake. There were areas that dropped as much as 8 feet and others rose 38 feet. Barnacles attached to rocks that used to be two feet underwater were suddenly in the open air.

A section of downtown Anchorage, shown below, sank. A banner in the background advertises a production of the play “Our Town.” 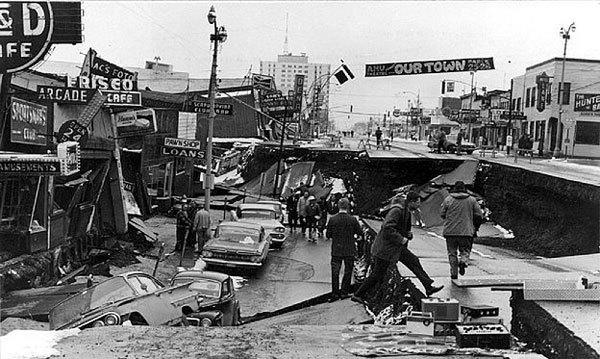 Underwater landslides in Alaska’s fiords caused tsunamis within minutes of the shaking. Three huge waves washed into Whittier, Alaska, within three minutes; Chenega, to the south, lost 23 people, one-third of its population. In Valdez, 30 died as the harbor and docks collapsed.

Below, a photographer overlooks devastation in Valdez. The earthquake spurred a look at quake risks, and the entire town of Valdez was relocated because of its location on extremely unstable ground. 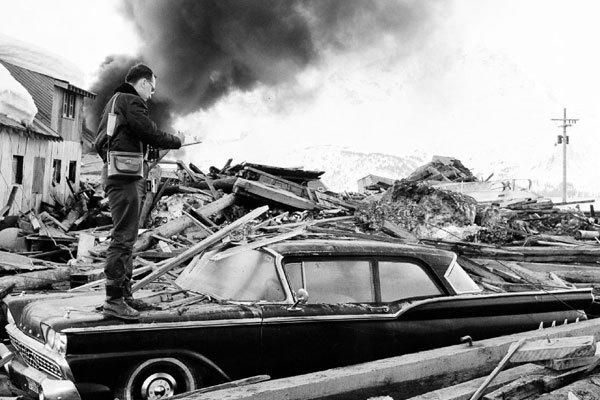 The earthquake sent a series of tsunamis out across the Pacific. The Los Angeles Times chronicled its effects on the West Coast. A tsunami caused casualties in Crescent City, Calif. 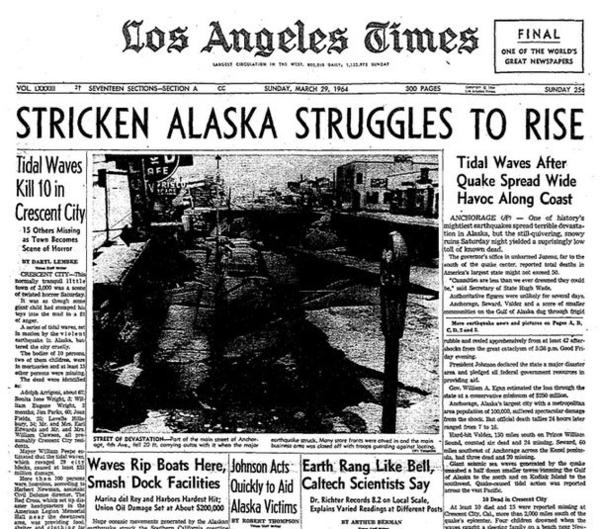 In an effort to predict the frequency of megathrust earthquakes, scientists used core samples to ascertain when previous such quakes had occurred in Alaska. They looked for places in the samples where plants that normally grow on land were found on top of ocean sediment. Those were indications that the ground made a sudden, dynamic shift. They found that nine large quakes had occurred in the last 5,500 years, separated by 630 years, on average. 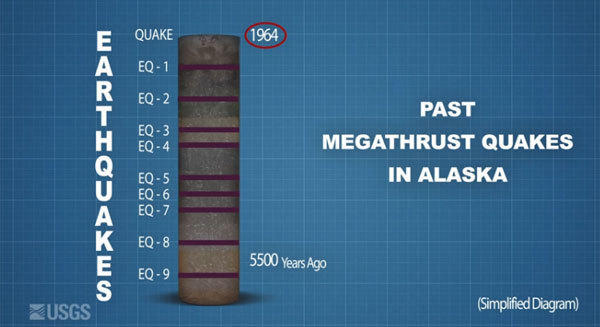 The 1964 Alaska earthquake resulted in loss of life and vast property damage, but its silver lining was the lessons learned. For instance, the movements in land mass helped USGS researchers confirm aspects of the theory of plate tectonics. Extensive research and scientific study following the tragedy brought invaluable insights into earthquakes, ultimately making for a more quake-safe future.