When - and where - did dogs first become our pets?

When it comes to evolutionary debates, this one is a major dogfight.

Since the time of Charles Darwin, scientists have argued over the origin of domesticated dogs, speculating wildly about how, when and where a toothy, flesh-eating beast was first transformed into man’s best friend.

Some experts believe humans were naturally drawn to small, furry wolf pups, and seized them as novelties. Others suggest they were raised for slaughter by early agrarian societies.

Yet another theory holds that early proto-dogs were enlisted as helpers by roving bands of hunters, long before humankind ever experimented with agricultural livestock.

“The experts get quite exercised about who’s right and who’s wrong,” said James Serpell, a professor at the University of Pennsylvania School of Veterinary Medicine. “Whether that’s just scientific hubris, I don’t know.”

But the epic argument over what sparked the Big Bark may finally be drawing to a close. As researchers avail themselves of faster and cheaper DNA sequencing technology, experts are zeroing in on the time and place where dogs were welcomed into human society.

In research published Thursday in the journal Science, evolutionary biologists analyzed the mitochondrial genomes of 18 ancient dogs and wolves. Then they compared them to an array of modern counterparts, and even a few coyotes.

The authors concluded that dog domestication most likely occurred in Ice Age Europe, between 18,800 and 32,100 years ago -- much earlier, and much farther north, than previously believed.

Dogs, the authors argued, evolved from a now extinct species of European wolf that followed bands of nomadic or semi-nomadic humans who were hunting woolly mammoths and other large prey.

Initially, the wolves sought out the carcasses and scraps of meat left behind by man, the authors suggest. Over time, these hang-around wolves began to fill a special role in human hunter-gatherer society, researchers say.

“The initial interactions were probably at arm’s length, as these were large, aggressive carnivores,” said senior study author Robert Wayne, an evolutionary biology professor at UCLA. “Eventually though, wolves entered the human niche. ... Maybe they even assisted humans in locating prey, or deterred other carnivores from interfering with the hunting activities of humans.”

From Europe, domesticated dogs spread across the Old World, and then to the Americas. However, the robust European wolf that got the fetch ball rolling left no other living descendants besides dogs.

“Wolves living on the planet today are not the closest group to the ancestor of dogs,” Wayne said.

Until recently, many archaeologists and biologists believed that dogs were first domesticated no more than 13,000 years ago, either in East Asia or the Middle East. A burial site in Israel contained the 12,000-year-old remains of an elderly man cradling a puppy. Archaeologists pointed to this find, as well as others, as evidence of a special, ancient bond between dogs and humans.

Yet tracing the exact path of dog evolution has been extremely difficult. Ancient dog remains are hard to distinguish from wolf remains, and frequent interbreeding between dogs and wolves further complicate matters. Add to that mankind’s zealous breeding of the animals to enhance specific traits and behaviors and the genetic waters become very clouded.

In fact, Darwin himself believed that the dizzying variety of existing dog breeds argued strongly that dogs must have had more than one wild ancestor. Genetic researchers today say this is most likely not the case, and that domesticated dogs evolved from one ancestor, in one region.

“On some levels, understanding the geographic origins of dogs is definitely more difficult than studying humans,” said Greger Larson, a bioarchaelogist at the University of Durham in England.

Larson, who was not involved in the Science paper, said Wayne and his colleagues had “significantly advanced” the debate over domestication.“I really like this paper,” Larson said. “Dogs have always been hard to pin down, and there have always been crazy ideas about the process and the location. But the emergence of genetic methods ... has elevated the level of discourse.”

There are those, however, who argue that Wayne and his colleagues are barking up the wrong genetic tree.

Peter Savolainen, an associate professor of evolutionary genetics at Sweden’s Royal Institute of Technology, argues that evidence shows dogs were first domesticated in China, probably as a source of food.

Savolainen points out that Wayne and his colleagues published an earlier paper citing the Middle East as the origin of domestic dogs, but have abandoned that view.

“They don’t comment on that in this paper and they should,” Savolainen said.

He pointed out too that the paper lacks animal samples from the Middle East or China.

“The only thing you’re looking at is European and Russian samples,” he said. “What can you tell really about anything? If you only have European samples, obviously you will find that Europe is the origin.”

Wayne said he and his colleagues did not include samples from those areas because they were too recent, only about 7,000 or 8,000 years old. “That’s well after dogs were domesticated, so we’re kind of limited in that sense,” he said.

As for the turnabout on the Middle East hypothesis, Wayne said it was based on new genetic evidence and the realization that domesticated dogs interbreed with local wolf populations, confusing the genetic signal.

“Initially, we didn’t appreciate how important that early admixture was,” Wayne said.

Study authors said they hope to confirm their findings with additional testing of genetic material. This new DNA will be taken from the nucleus of ancient cells, which contain abundantly more information than DNA taken from cell mitochondria.

In the meantime, experts are left to ponder this latest development, as well as the reason why scientists have argued so heatedly about the origin of dogs.

“You might as well ask why,” Serpell said with a laugh. “People make up tremendously elaborate stories about the origin of our own species based on a few fossil remains here and there, or DNA from this individual or that individual. I guess we’re doing the same thing now to our dogs. ”

What is your dog really saying with a tail wag? 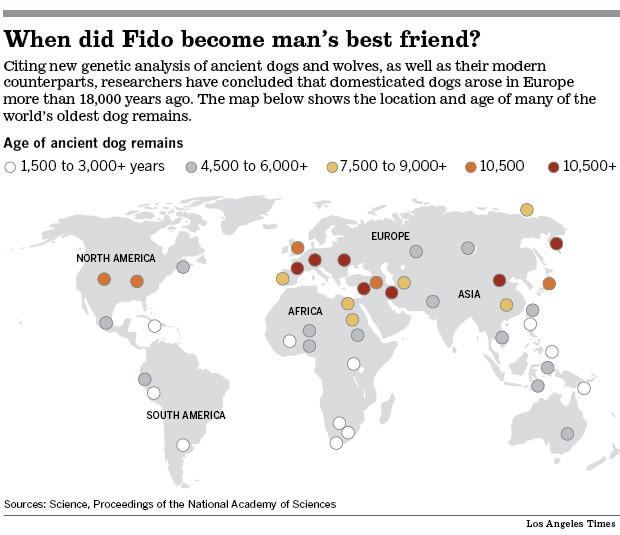 Monte Morin is environment editor for the Los Angeles Times.