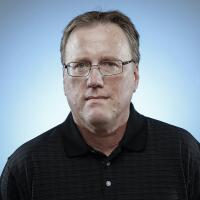 Chris Dufresne was the Los Angeles Times’ national college football/basketball columnist from 1995 to 2015. He also covered skiing at the Winter Olympics and wrote extensively on most sports. He is a multiple national award winner and was named 2011 California Sportswriter of the Year by the National Sportswriters and Sportscasters Assn. A Los Angeles native, he started at The Times in 1976 as a truck loader and literally worked his way up (two floors to be exact).