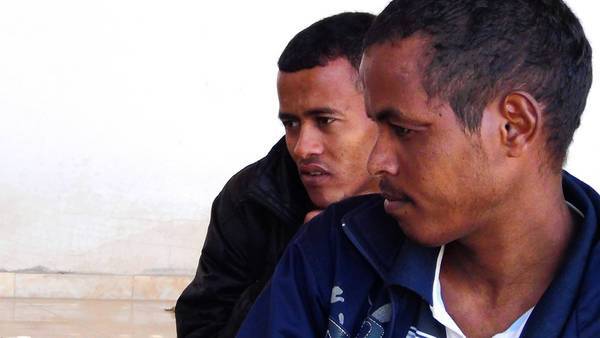 Young African migrants who escaped their captors. Many had been given false promises of finding work in Israel.

Any inkling of law and order in Egypt’s Sinai Peninsula vanished with the revolution. Eritreans, Sudanese and others are abducted as they try for a better life.

Photography by Ahmed Abu-Deraa, For The Times


He counted his scars at the desert’s edge.

Scabbed electrical burns, purple splotches etched by chains, a map of blisters raised by candle wax dripped across his back. His captors threatened to bury his body beneath the sand and stars. They had buried others, he knew. They held him down and called his family in Eritrea.

“That amount,” said his father, a cattle herder, “is bigger than our dreams.”

Frezzghi Geremedhin left his East African village 15 months ago, an army deserter believing a better future as a driver or a laborer awaited him in Sudan. He was kidnapped there, smuggled into Egypt, ferried across the Suez Canal, handed over to Bedouin tribesman and chained to another African.

“I only wanted to change my life,” he said.

The deserts of the Sinai Peninsula do not grant wishes. This land of stick huts and nomads has long been untamed, but any inkling of government order vanished after the revolution that overthrew Egyptian President Hosni Mubarak’s police state. Islamist militants roam, smugglers hold sway and crimes are absolved or punished by ancient codes of tribal justice.

Desperate men and women disappear into this strange and dangerous place. Migrants are held for ransom or shot at by Egyptian border guards as they try to sneak into Israel for work. They come from Ethiopia, Eritrea, Sudan and even Madagascar. Some, like Geremedhin, are brought to the Sinai against their will; others hire smugglers to help them reach Israel.

Frezzghi Geremedhin, left, and Tesfalem Zeru at a safe house in the Sinai desert. Both escaped their captors after months of torture.

They grow thinner by the day, marching in single file and stumbling with disease. Their documents are stolen or lost and their dark skin sets them apart. Men with guns call them slaves.

Abu Abdul was one of those men.

“You torture them and you ask for $30,000 and you keep on torturing them,” the Bedouin smuggler said. “You torture because of greed and to make the family pay.”

He spoke in a small house surrounded by other men. No pictures hung on the walls. Professional wrestling was muted on the television. Sand blew outside and trucks growled in the distance. A big man with an unkempt beard, Abu Abdul reclined on a cushion nursing a swollen leg from a motorcycle accident.

“They die by the twos and threes,” added a compatriot sitting next to him. He tilted his head toward the doorway. “They’re buried out there in the sand.”

The sand is endless, whirling, shifting, gathering. Not long ago, three bodies were found in the desert. They had been wrapped in blankets and bags and dumped in the town square. A tribesman called authorities but no one would come. The head of the morgue said, “I don’t have room; do with them what you will.” The tribesman loaded the bodies into a car and stacked them in front of the hospital.

A young African recovering at a safe house has wounds from chains around his wrists.

They lay there through the night and were later dropped in nameless graves in the sand.

Conscripted into the Eritrean army, he envisioned his destiny: decades as a soldier guarding dusty checkpoints and earning a few dollars a month. So he struck out from his village of Goluje in the country’s north and, like thousands of others, followed well-trodden trails into Sudan. He was captured there by the Rashaida tribe, a heavily armed clan known for human trafficking.

“They put us under one tree, but the tree was small and the shade little,” he said. “We sat there five days eating bits of bread. When there were 13 of us, they put us in cars and took us to the Nile. We crossed on boats and came into Egypt. They separated us into two groups and demanded big money.”

Geremedhin, 21, a slight man with borrowed clothes and close-cropped hair, was held in a tin-walled room with five others.

They tied our hands and feet and hung us on ceiling hooks. ... They beat us while we talked to our families on the phone. They wanted our families to hear us scream.”

“They came to beat us at any hour,” he said. “They tied our hands and feet and hung us on ceiling hooks. They wrapped wires around our fingers and plugged the wires into a socket. They kept demanding money. They beat us while we talked to our families on the phone. They wanted our families to hear us scream.”

His relatives, in one of the poorest countries in the world, begged neighbors and friends for donations. His father sold some of his herd and wired $25,000 to a man in the Sinai. It was enough to save Geremedhin’s life but not to free him. He was moved to a different room and chained to another Eritrean whose family had raised $24,000. They rarely glimpsed the sun.

As a watchman at a warehouse outside Rafah, he saw things move in the night: rockets, diapers, cars and cement hustled through tunnels into Gaza; guns trucked in from Libya; drugs carted east and west; and Africans rushed through scrub and along barbed wire. He craved the riches of smuggling. He befriended an Eritrean broker and trafficked his first group of four migrants into Israel in 2009.

“There are no good jobs here,” he said. “You can grow wheat or marijuana or trade in weapons and slaves. There’s no government. The police don’t bother us. Word got out that I could get people into Israel, and Africans started coming to me in batches of 80 and 90 at a time.” 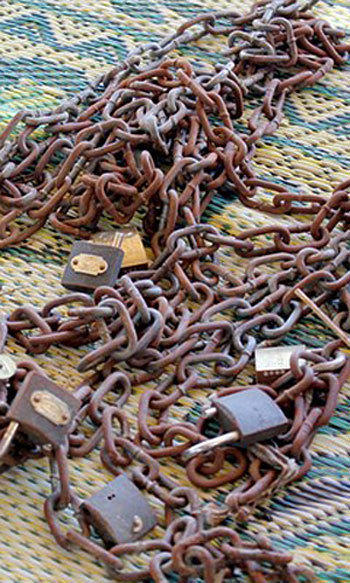 Human traffickers in the Sinai keep African migrants in chains for months while threatening to kill them and extorting ransoms from their families.

After the Egyptian revolution and the anarchy it brought to the Sinai Peninsula, Abu Abdul turned brazen and violent, beating migrants and extorting money from their families.

“Before the revolution we could have been reported for torture. But there was no law after,” he said. “You could have slaughtered anyone who stood against you. I made 700,000 Egyptian pounds [more than $100,000] right after the revolution. The slaves got tricked all along the way. They were tricked in Eritrea, tricked in Egypt, tricked into thinking they would make $500 a day in Israel. It was a big game.”

He looked at his hands: “Torture was just another means of getting them to pay.”

Abu Abdul sailed on bluster but then quieted. He was uneasy. He looked at the faces around him. The rules of the land have changed in recent months. Islamist militants who have grown stronger in the peninsula have condemned human trafficking and tribal leaders have proclaimed that it degrades society.

“The tribes and the Islamists told me to stop or I might not wake up one morning. There are only six to 10 traffickers left who are still moving people,” he said. “The motorcycle crash was a sign to me. I saw death and God gave me another chance.”

He rubbed his hands. One of the men wondered whether the accident wasn’t so much a sign from God as a warning sent by a tribal leader or a militant. A boy slipped through the doorway with a kettle of tea. Abu Abdul spoke of the damage he had done, the lives he had ruined. He said he had become a different man. The other men in the house shook their heads, believing, at least for the moment, that he spoke the truth.

Not far away, past poor villages and pagoda-style houses that have become the latest architectural fascination of smugglers and drug lords, Geremedhin sat beneath a thatched roof and looked out over the desert. He listened to bird song and silver trays rattling with lunch.

He recently arrived at this safe house after escaping his captors and coming upon a mosque run by a sheik who has offered refuge to nearly 300 Africans adrift in the Sinai Peninsula. Many of them wander in bruised, cut and thirsty. They stay for a while as guests and many are then handed over to humanitarian agencies.

“I used to do errands and clean up for my kidnappers,” Geremedhin said. “They unchained me that day and I ran away through the sand.”

Many young Africans who had escaped their captors have found refuge with a sheik and then have been turned over to humanitarian agencies.

He sat next to another Eritrean, a young man who also escaped kidnappers after his family had sold their home for the ransom. The men, stiff as if still in chains, walked to the edge of a tiled courtyard, Geremedhin shorter and resolute, the other man drawn and shaken. They perched on thin legs, birds awaiting flight.

All they had was upon them. Geremedhin’s jacket was imprinted with the outline of the man who had owned it before. The wind gusted and a shepherd crossed the blurry horizon. Sand encroached on the roadsides in the shape of snakes, and the call to prayer filled the sky and blew away.

Geremedhin does not want to go home. There is nothing there but poverty and a soldier’s uniform. He will keep moving. He wonders, though, how many head of cattle his father sold to save his life.

An old call for calm stokes a frenzy