Story So Far: How migrant boat deaths became a crisis in Europe

Hundreds of migrants trying to cross the Mediterranean to get to a European shore are feared to have died at sea after a vessel capsized off the coast of Libya over the weekend. Here's what you need to know about why migrants are crossing the Mediterranean by the hundreds, and what officials are trying to do about the crisis.

How many people are believed to have died in the latest sinking?Full story

As many as 700 people may have died in the latest incident, believed to be the deadliest mass drowning in the escalating crisis.

The 75-foot-long wooden fishing boat capsized off the Libyan coast late Saturday or early Sunday. According to initial reports, the boat tipped over when panicked passengers shifted to one side as a cargo ship, which was arriving to intercept them, drew near.

Officials have rescued only 28 survivors and found 24 corpses from the site of the shipwreck, about 70 nautical miles north of Libya.

Two of the survivors have been arrested on human trafficking charges, Italian authorities announced late Monday. An Italian prosecutor described them as the vessel’s captain, a Tunisian national, and a crewman, a Syrian national.

One survivor told Italian police that as many as 950 people were on board the vessel; other reports put the number much lower, at 600 or 700. About 200 women and 40 to 50 children are believed to be among those dead.

The passengers in this latest attempted passage are believed to have been from Algeria, Egypt, Somalia, Nigeria, Senegal, Mali, Zambia, Bangladesh and Ghana.

How many other shipwrecks have there been in the last week?

At least two. On Thursday, 41 African migrants are believed to have drowned in the Mediterranean after the inflatable dinghy they were on sank after leaving Libya. Rescue helicopters retrieved only four survivors.

Also last week, at least 400 migrants bound for Europe are believed to have died at sea when another wooden fishing boat capsized, according to the International Organization for Migration. A third of those on board are believed to have been women and children. According to reports, the boat is believed to have capsized after the passengers surged to one side of the boat when they saw rescuers arriving. One hundred and forty-five survivors were rescued from that wreck.

In the week before the accident that took place over the weekend, Italian maritime forces and commercial ships rescued about 10,000 migrants attempting the perilous sea crossing, according to the IOM.

From April 11 to 13 alone, more than 5,100 migrants arrived in Italy in 18 landings, according to Save the Children.

On Monday, officials reported receiving at least two additional calls for help from several other vessels carrying about 300 migrants. Rescue teams were responding, they said.

How many people have died this year?

Before last weekend's accident, about 900 migrants had died in Mediterranean crossings in 2015.

Shortly after the shipwreck, the International Office on Migration updated the number to 1,727 deaths.

Are migrant deaths at sea increasing?

About 3,500 migrants lost their lives or went missing during Mediterranean Sea crossings in 2014, according to the United Nations, making it the deadliest year to date. The 2015 death toll could be on track to surpass that.

Dead and missing migrants in the Mediterranean Sea 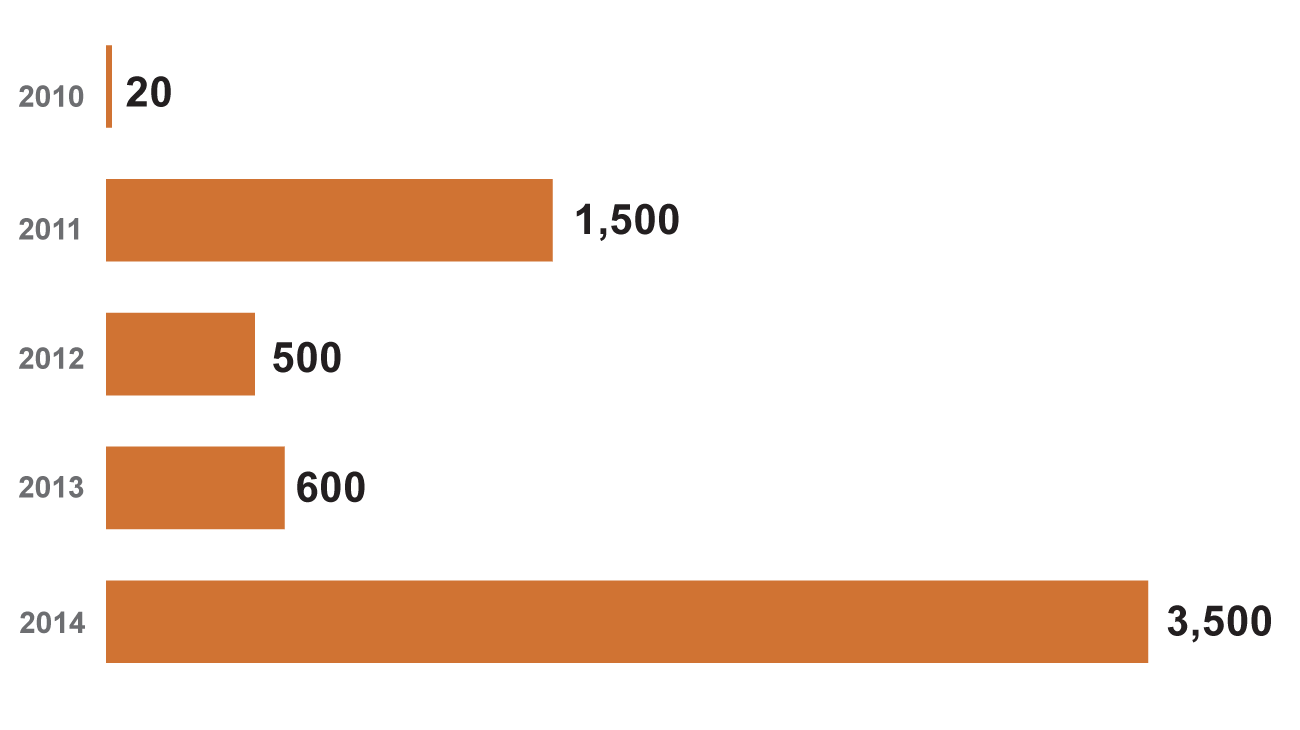 Why have migrant deaths been increasing?

According to U.N. officials, part of the reason for the jump in deaths is that Italian coast guard ships and patrol ships operating under a European Union mission are not able to reach boats as fast as the Italian navy ships that patrolled the waters until their mission was scrapped last year.

That mission, named Mare Nostrum and launched in October 2013 by the Italian government, routinely patrolled large swaths of the Mediterranean Sea, including areas closer to Libya’s shores. But with growing opposition to illegal immigration and the $10-million monthly price tag of the mission, Italian officials canceled the effort in 2014, pressuring EU officials to step in.

The EU’s Operation Triton, a lower-cost mission, patrols only up to 30 miles off the Italian coast, and has been called useless by refugee aid groups.

Attempted crossings could also be going up. According to U.N. figures, some 219,000 refugees and migrants crossed the Mediterranean last year, and a record number, about 170,000 of those, landed in Italy: 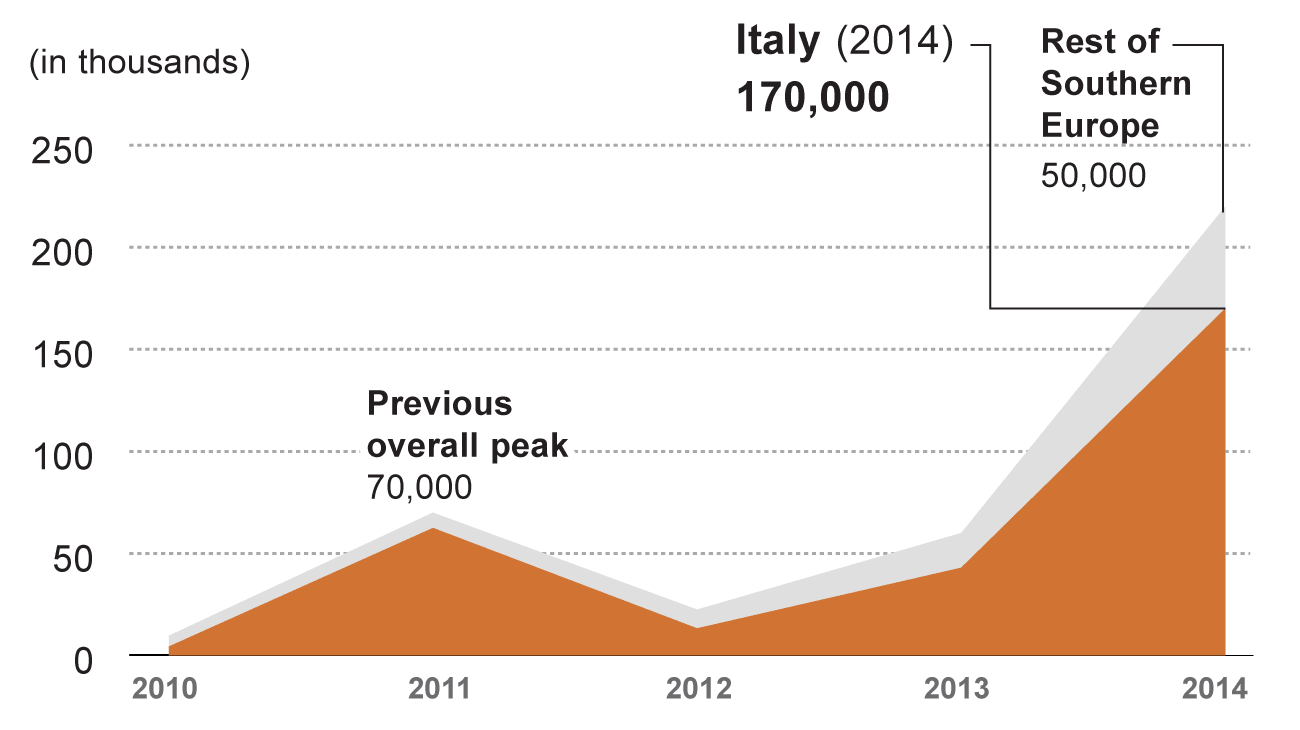 So far this year, 23,500 have landed in Italy, and experts believe crossings -- which peak in the summer months -- could be on pace to break last year’s record.

Why have so many attempted to cross recently?

With a recent run of good weather and higher temperatures, thousands of migrants have tried to cross the passage in the last few weeks.

In addition, increasing violence in Libya, which had become a hub for migrants hoping to reach Europe by sea, has spurred an increase in crossings.

Some have also argued that the presence of Italian navy ships that until last year patrolled Mediterranean waters on search-and-rescue missions encouraged greater mass migration from Libya, as migrants perceived they had a greater chance of being rescued.

Where are the migrants from and why are they fleeing? Full story

Last year, the majority of the refugees fleeing to Italy were Syrians trying to escape civil war there.

Now, many Syrians are trying to cross into Europe through Greece, and most of the migrants on the Libya-to-Italy route are largely hailing from Eritrea, where thousands of citizens are trying to flee forced conscription. Others are fleeing from war, oppression and poverty in Somalia, Ethiopia, Mali, Gambia, Nigeria and Guinea, among other countries.

Most are embarking from Libya, which has become the jumping-off point for migrants trying to reach Europe by sea.

Often, migrants from sub-Saharan Africa and Syria make their way to Libya and pay smugglers as much as $1,000 for passage on a boat.

They might set sail in fishing boats, life rafts, inflatable dinghys or other rickety vessels that may crash or run out of fuel.

Traffickers routinely pack larger vessels with “layers” of passengers, with many locked in lower decks, greatly diminishing their odds of surviving a shipwreck.

Technology has accelerated migration. Many migrants carry smartphones, which they can use to check online reviews of traffickers who advertise through Facebook. They use WhatsApp to keep in touch with relatives who have made it to Europe. Once at sea, migrants use satellite phones provided by traffickers to alert rescuers to their location.

Most are trying to reach either Sicily or the Italian island of Lampedusa, 180 miles across the sea from Tripoli. 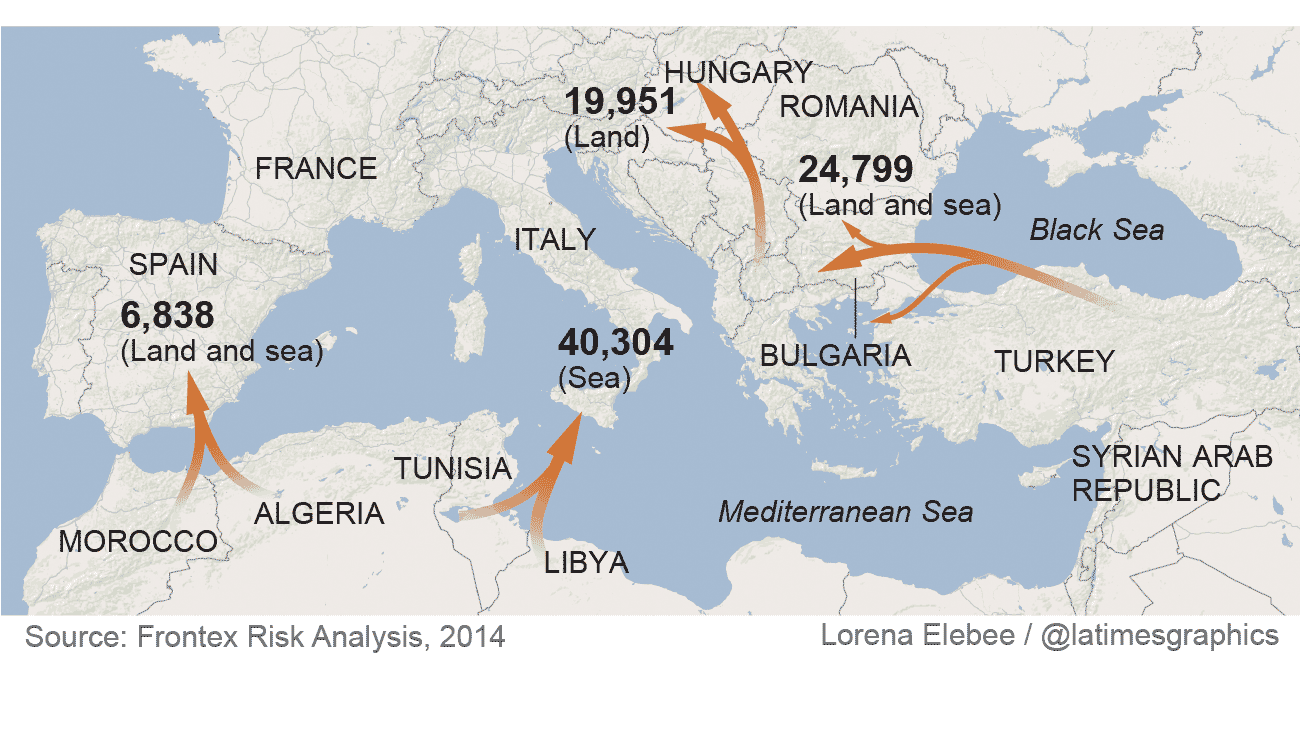 What other events have spurred mass migration on the Mediterranean in recent years?

In 2011, political upheaval prompted 26,000 Tunisians to make the crossing. Many of them passed straight through Italy and headed to find relatives in France. That same year, Libya’s “Arab Spring” and the fall of Moammar Kadafi’s government created a void that has allowed traffickers to operate with relative impunity.

Recently, newly arrived migrants have said their traffickers forced them onto boats at gunpoint, despite poor weather, fearing that the passengers could be forcibly recruited by Islamic State fighters taking over Libyan towns.

How have officials attempted to stem the flow of migrants in the past?

In 2008, the Italian government struck a deal with then-Libyan leader Kadafi to institute a “pushback” system, involving joint sea patrols that turned back boats leaving Libya. The arrangement was struck down by the European Court of Human Rights in 2012, which ruled that the system would have turned away legitimate asylum seekers.

In October 2013, more than 360 migrants died after their boat had engine problems less than a quarter of a mile from Lampedusa and began to sink. Passengers set a blanket on fire to alert rescuers, but fuel in the water ignited, Italian officials said, and the ship caught fire. Passengers fled to one side of the vessel, which caused it to capsize.

After that incident, the Italian government launched the Mare Nostrum mission, which dispatched helicopter carriers, drones and even a submarine to rescue stranded migrants. The operation rescued approximately 150,000 migrants, but it was discontinued a year later.

Have the EU search-and-rescue patrols been as effective as the Italian missions?

Experts say no. Since the smaller European Union patrol, known as Triton, has replaced Mare Nostrum, sailings have continued at about the same level as before, but drownings have soared.

Critics, including the Italian branch of Doctors Without Borders, have blamed the EU’s decision to provide only a small-scale rescue effort. Antonio Guterres, the U.N.’s high commissioner for refugees, has said the latest disaster “confirms the urgent need to relaunch a robust rescue operation at sea and to establish credible, legal routes to reach Europe.”

Former Italian Prime Minister Enrico Letta, who launched Mare Nostrum, said earlier this year that the operation should be revived whether “other European countries want it or not, whether it loses votes or not.”

What are officials doing now about the situation?

European Union ministers convened for an emergency meeting in Luxembourg on Monday, hoping to come up with a response to the crisis. “The reputation of Europe is at stake,” Italian Foreign Minister Paolo Gentiloni said.

At an emergency meeting of European leaders Thursday, the EU announced it will triple funding for search and rescue operations, reportedly bringing the budget to $9.7 million a month. That is much closer to Mare Nostrum's previous budget.

European Council President Donald Tusk also vowed to go after smugglers, saying that the EU would seize and destroy their vessels before they could be used.

Britain, Germany and France are among the countries that have promised to contribute ships to the effort.

April 23, 4:17 p.m.: Updated to include information about the EU announcement and stepped-up search-and-rescue efforts.

April 20, 5:41 p.m.:: This article has been updated throughout with additional information about the arrest of two survivors and context for the recent increase in Mediterranean crossings.

This article was originally published on April 20 at 2:17 p.m.