What can we learn from Europe’s last massive human migration?

“The tide of foreign civilians on the roads swells with every hour of our advance. What was a trickle at the start of our drive is now a full-grown stream — and a full-grown problem.”

The words could have been penned yesterday. But the author, journalist Henry J. Taylor, wasn’t describing the flood of refugees now making their way across Europe in a desperate migration that has strained the continent’s ability to cope. He was writing about the chaos unleashed there as World War II drew to a close.

Not since that horrific conflict has Europe confronted a crisis of this kind. Black and white photographs from the time show columns of bedraggled people trudging down railway lines and swarming trains in scenes that appear tragically familiar today.

PHOTOS: Looking back at The refugee crisis during World War II Long columns of Polish men and women move through the streets of Warsaw to less destroyed areas Sept. 15, 1944. (Associated Press)

The international laws and institutions that emerged provide the foundation for the world’s refugee response today. But they are being tested by a global crisis that the United Nations says has seen some 60 million people driven from their homes by brutal conflicts, breakdowns in basic governance and economic despair.

Some poorer eastern European nations, unwilling to take on the burden of accommodating a share of the refugees, more than half of them Syrians, are threatening to flout international obligations to provide asylum to those fleeing war and persecution.

At the same time, the U.N.'s emergency appeals to provide aid to the displaced closer to home — before they risk their lives in overcrowded boats and trucks to reach Europe — are chronically underfunded.

With world leaders assembled in New York for the annual United Nations General Assembly gathering, Secretary-General Ban Ki-moon convened a high-level meeting Wednesday to mobilize what he hopes will be a “humane, effective and rights-based response” to the crisis.

“Men, women and children fleeing war and persecution deserve real support, including asylum,” Ban said. “I ask those standing in the way of the rights of refugees to stand in their shoes.”

How does the current refugee crisis compare with World War II?

More than 520,000 refugees and migrants have washed up on Europe’s shores this year. However, the numbers pale in comparison with the millions on the move during World War II and its aftermath.

Even before the war began, thousands of Jews and members of other persecuted groups were fleeing Nazi Germany and annexed Austria. Millions more people were displaced by the conflict in Europe between 1939 and 1945.

At the close of the war, concentration camp survivors and other victims of the Nazis took flight in a migration observed by Taylor, whose dispatch from Germany for the Scripps-Howard Newspapers was published on the Los Angeles Times editorial page April 12, 1945.

“As our advance overruns one concentration camp after another the detained people who have been under German guards for as long as five years are rushing to get away — anywhere else. They gather up what they have or take nothing with them and strike out for the roads,” he wrote. “They walk in twos, or tens, twenties or hundreds, trudging along with settled faces, going forward as though guided by some instinct.”

Millions of other people were also on the move. They included many Germans expelled from eastern Europe, and other people fleeing newly installed communist governments.

How did the world respond back then?

It would take years for world leaders to resolve the fates of all those set adrift by World War II, a process complicated by the start of the Cold War.

The response included the development of laws, including the 1951 Convention Relating to the Status of Refugees, affording a right to asylum and other protections to those fleeing a “well-founded fear of being persecuted.”

New institutions were created to oversee the process. The United Nations Relief and Rehabilitation Administration was set up in 1943. It was succeeded in 1946 by the International Refugee Organization, which gave rise in turn to today’s Office of the United Nations High Commissioner for Refugees. 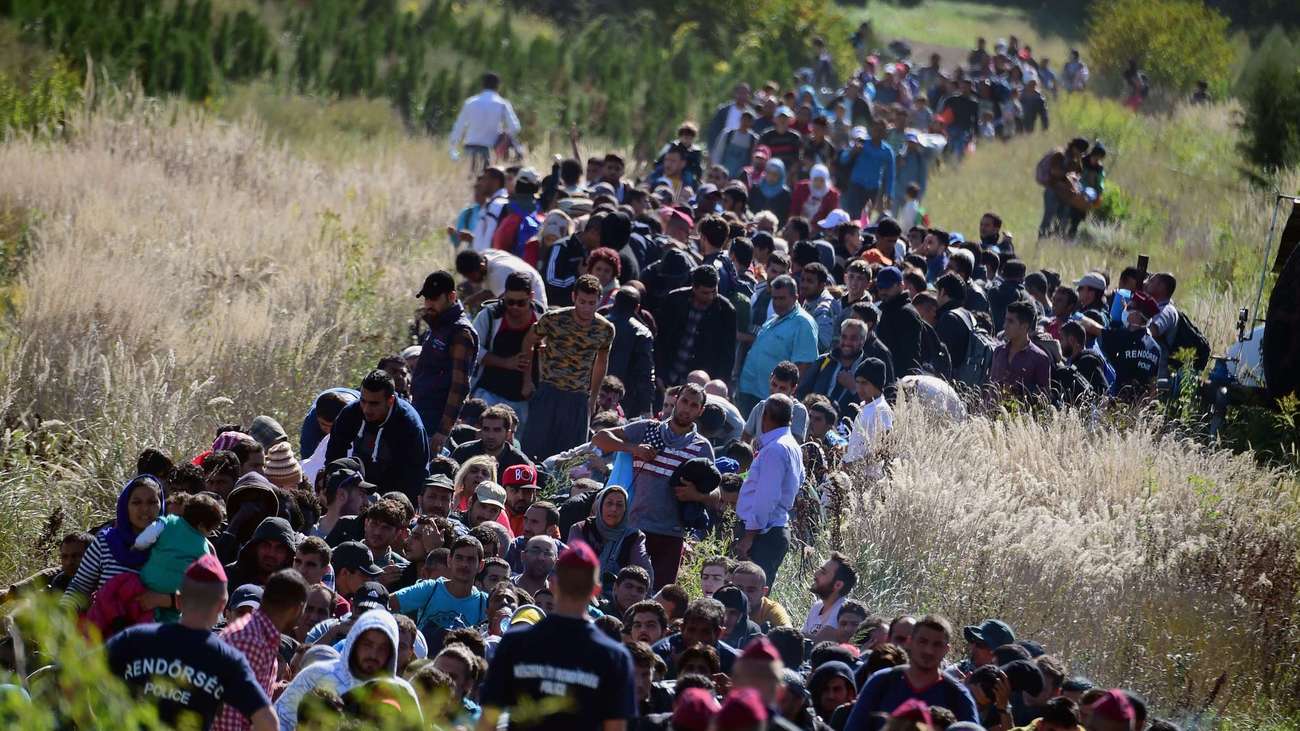 Migrants walk through the Hungarian countryside after crossing the border from Croatia on their way north. (Attila Kisbenedek / AFP / Getty Images)

How is the system working?

Refugee advocates and experts in humanitarian law contend there has been a breakdown in the international system.

After more than four years of conflict, few of the 4 million Syrians who sought refuge in other countries in the Middle East and North Africa have any expectation of being able to return home. Many have exhausted their savings and are essentially barred from working where they are. With little hope of being resettled elsewhere, “they have voted with their feet,” said Stewart Patrick, who heads the International Institutions and Global Governance Program at the Council on Foreign Relations in Washington.

Some European countries, notably Germany, are responding generously to the refugees, Patrick said. But others are disregarding their obligations. He cited the example of Hungary, which is building fences to keep out potential asylum seekers and has set an eight-day deadline to review applications that would appear to violate expectations of a fair process.

Other experts note that the 1951 convention does not take into account many desperate and vulnerable people now fleeing nations beset by violence, high levels of destitution, weak governments and abysmal human rights records.

“These are people who don’t fit the refugee definition, but nor are they voluntary economic migrants,” said Alexander Betts, who heads the Refugee Studies Center at the University of Oxford. “That’s a question that politically, very few governments are prepared to acknowledge.”

What lessons can we draw from history?

He attributed much of the chaos to poor decision making and what he sees as a fundamental contradiction in the refugee policies of the European Union, namely that to request asylum, a person must first reach EU territory clandestinely. Nearly 3,000 people have died or gone missing in the attempt this year.

Betts would like to see more countries offering humanitarian visas, which he says would provide a legal mechanism for asylum seekers to reach Europe and ease the pressure on frontline states such as Greece, Italy and Hungary.

Experts warn, however, that such crises won’t be resolved until world leaders address the many intractable conflicts now driving refugees from their countries.

“Collectively, these crises have stretched to the limits our vital tools for conflict resolution and humanitarian response,” Ban told world leaders Monday at the U.N. “We need a renewed commitment to prevention, stronger regional partnerships and sustained engagement on peace building.”