Here’s what archaeologists found in a warrior’s grave that’s been untouched for 3,500 years

The discovery, in the words of one of the archaeologists who uncovered it, was "the find of a lifetime."

The tomb of a Bronze Age warrior left untouched for more than 3,500 years and packed to the brim with precious jewelry, weapons and riches has been unearthed in southwestern Greece, according to researchers at the University of Cincinnati. 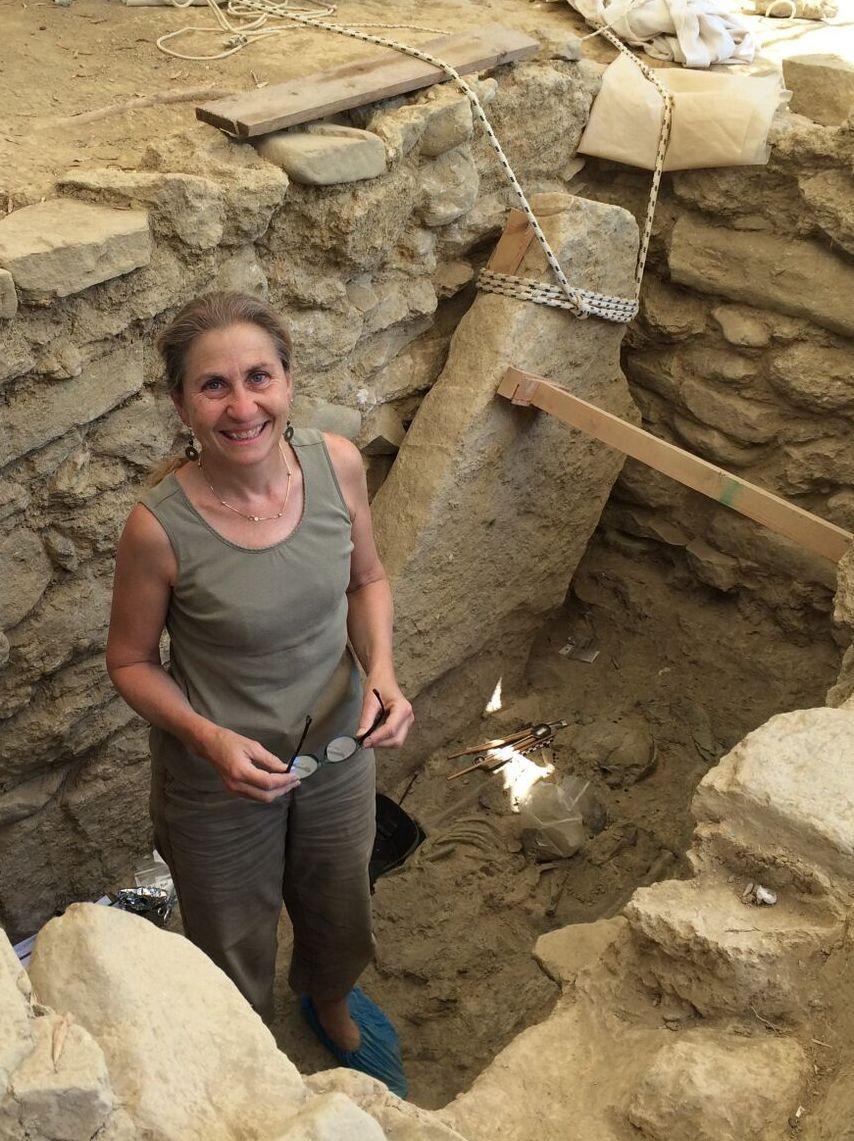 The shaft tomb, about 5 feet deep, 4 feet wide and 8 feet long, was uncovered in May by a husband-and-wife team from the university. But the find was kept under wraps until an announcement Monday by Greek authorities.

Sharon Stocker and Jack Davis began excavating the site near the modern-day city of Pylos, Greece, in May.

They were working near the Palace of Nestor, a noted destination in Homer’s “Odyssey." That site was uncovered by famed University of Cincinnati archaeologist Carl Blegen in 1939.

Stocker and Davis initially thought they might have stumbled upon a Bronze Age home just outside the palace, but as they continued digging, they uncovered one bronze piece after another.

“That’s when we knew ,” Stocker told the Los Angeles Times in a phone interview from Greece, where she is still working.

What she and a team of dozens of researchers uncovered were incredible riches in a rare solo grave of a Mycenaean warrior who was buried several centuries before the rise of classical Greek culture.

Here’s a sampling of what they uncovered:

Solid gold jewelry and precious stones on his right 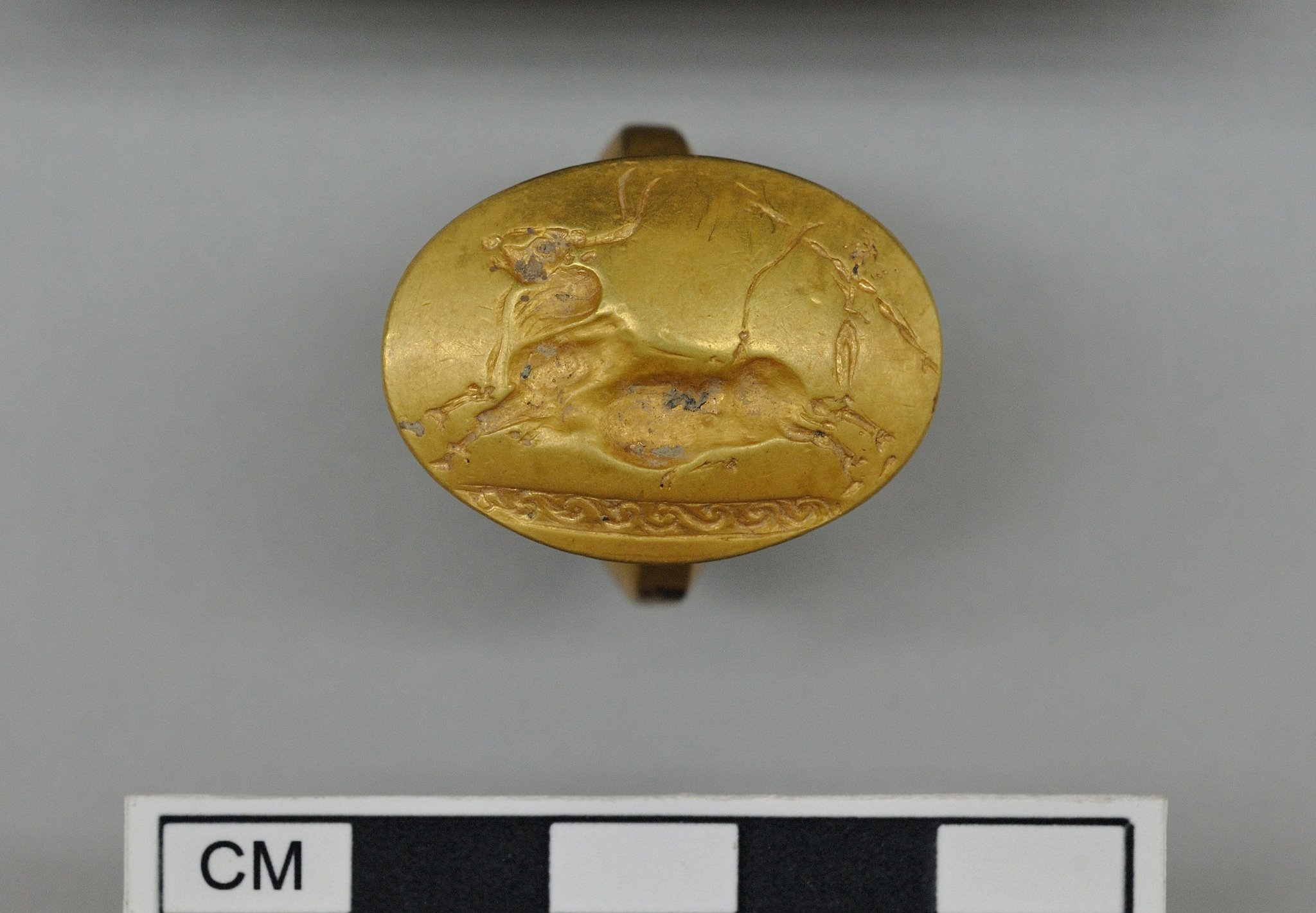 Four solid gold rings, carved with intricate designs, were found in the tomb near the warrior’s remains. The researchers say this is more than has been found in any other single burial in all of Greece. 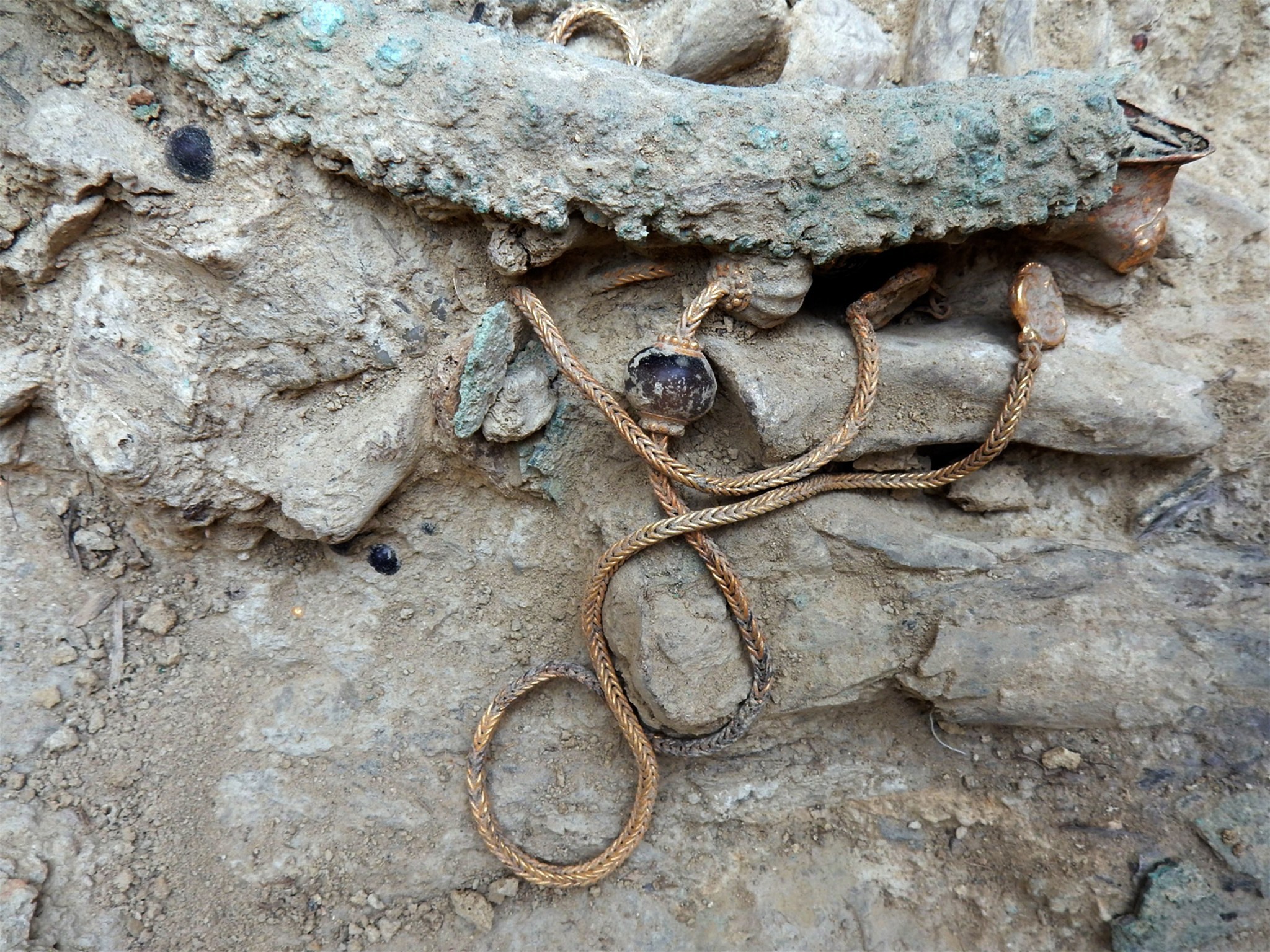 The necklace is more than 30 inches long and features two gold pendants on each end, decorated with ivy leaves. (Greek Culture Ministry)

More than 1,000 precious stone beads were also uncovered, many of them with holes drilled in the center for stringing together. The beads were made of carnelian, amethyst, jasper, agate and gold, researchers say. Some may have even been sewn to a burial shroud of woven fabric, a tiny square of which survived 35 centuries in the grave.

A solid-gold chain necklace, more than 2 feet long with pendants on either end, was also found near his neck. 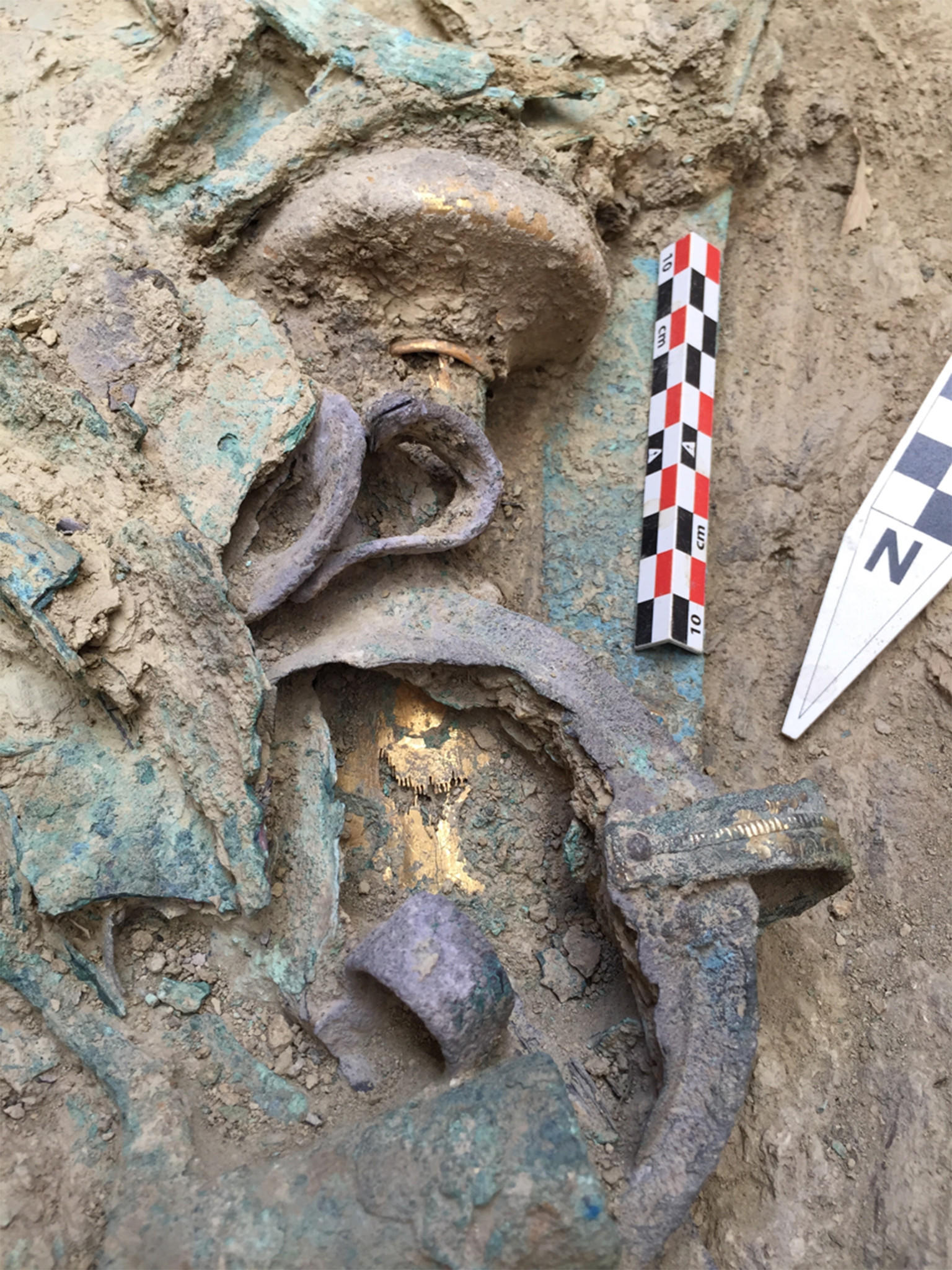 (Courtesy of University of Cincinnati)

Weapons on his left

A 3-foot sword with a handle made of ivory and overlaid in gold lay at the warrior’s left chest. Underneath it was a dagger that was decorated with gold using an intricate technique that resembles embroidery.

Other weapons, made of bronze, including a slashing sword and spearhead, were found at his legs and feet, and the remnants of a bronze suit of armor were found on top. 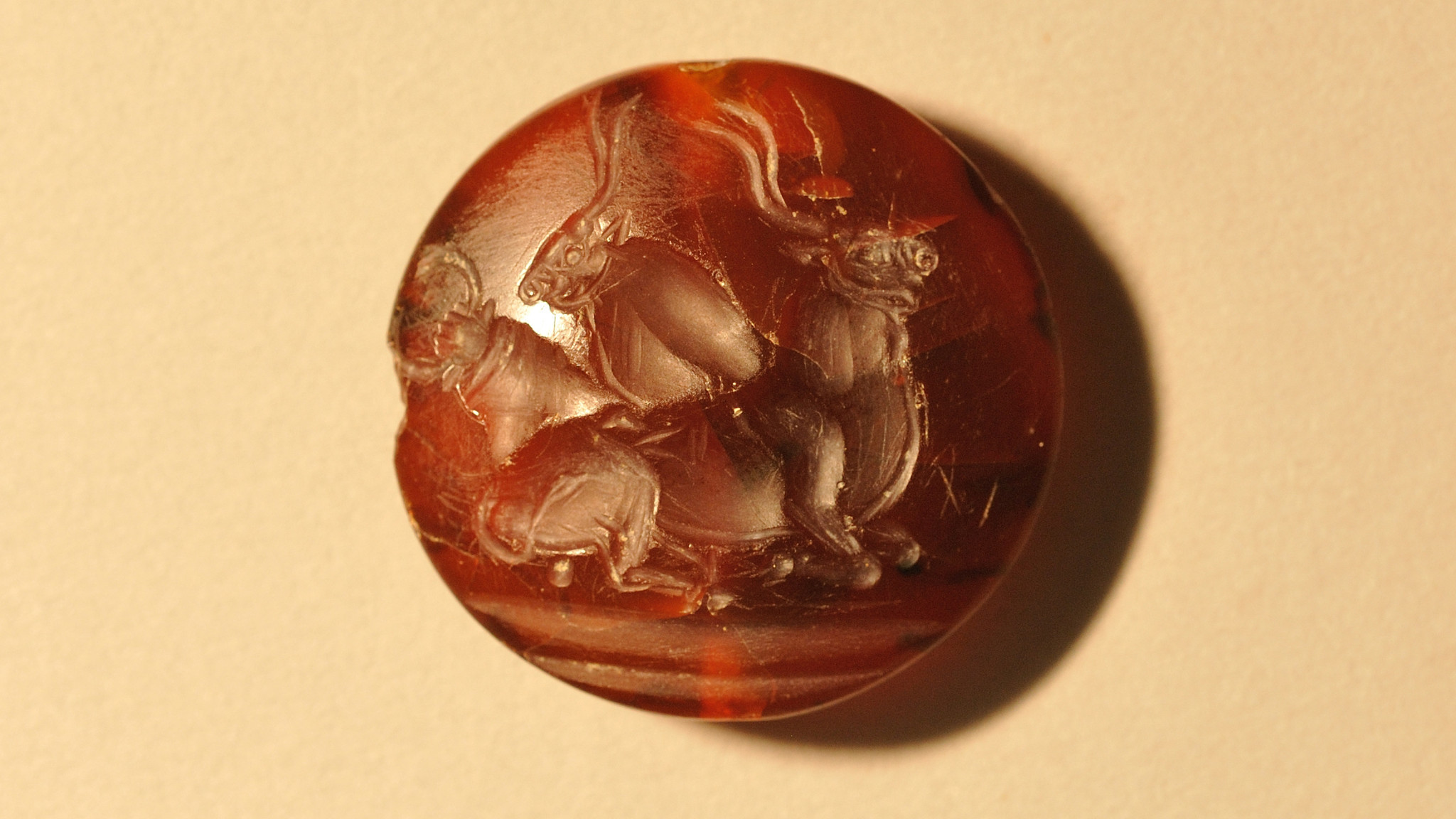 One of more than four dozen seal stones with intricate Minoan designs found in the warrior's tomb. Long-horned bulls and human bull jumpers soaring over their horns are a common motif in Minoan designs. (Courtesy of University of Cincinnati)

Dozens of seal stones, which were decorated with detailed etchings in the Minoan style, were found to the left and right of the warrior’s skeleton. About the size of a quarter, the seal stones depicted goddesses, lions and bulls, and men jumping over a bull’s horns, a common sport in the Minoan civilization.

Beauty essentials: combs and a mirror 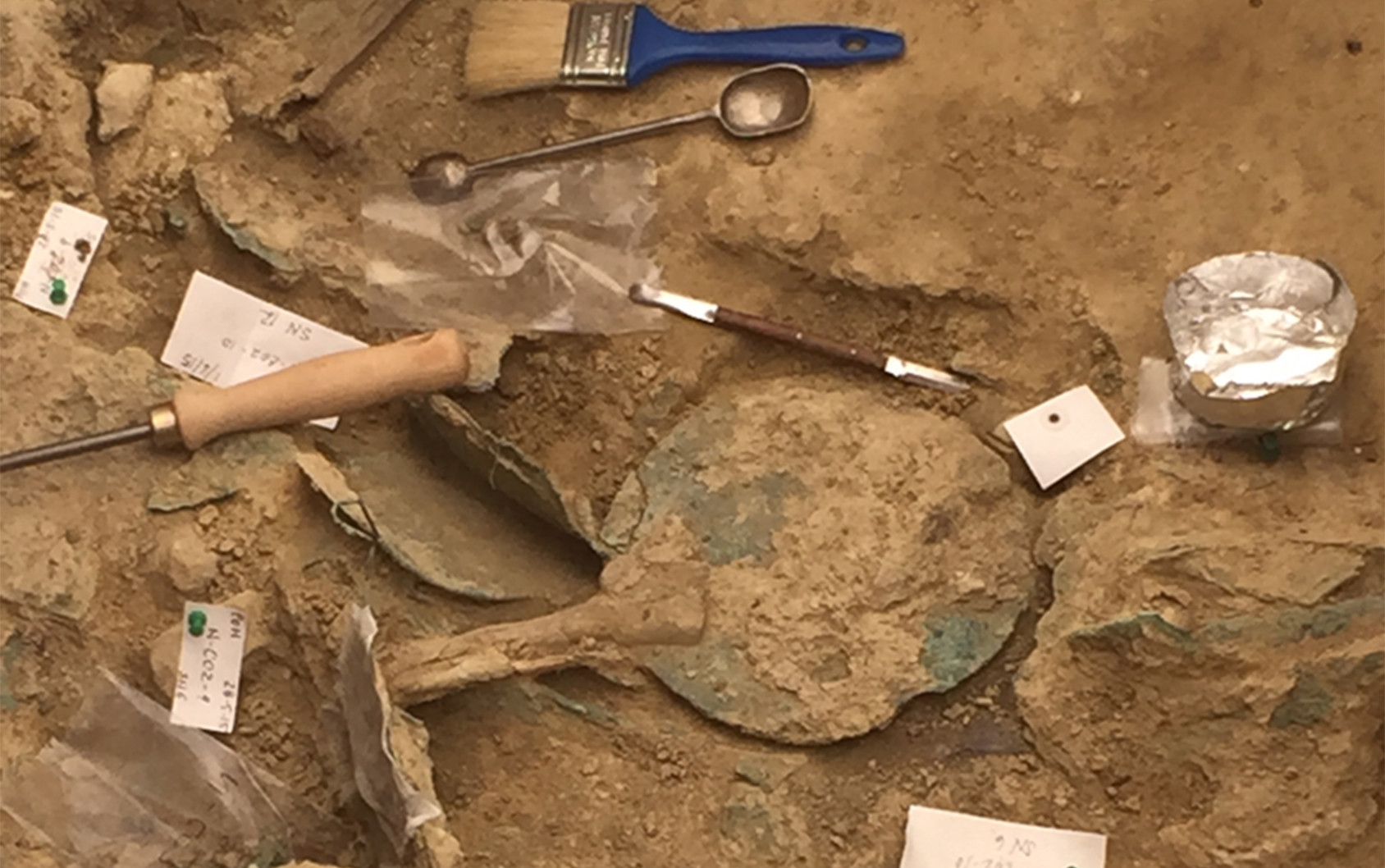 A bronze mirror with an ivory handle was among the more than 1,400 objects found in the grave. (Courtesy of University of Cincinnati) 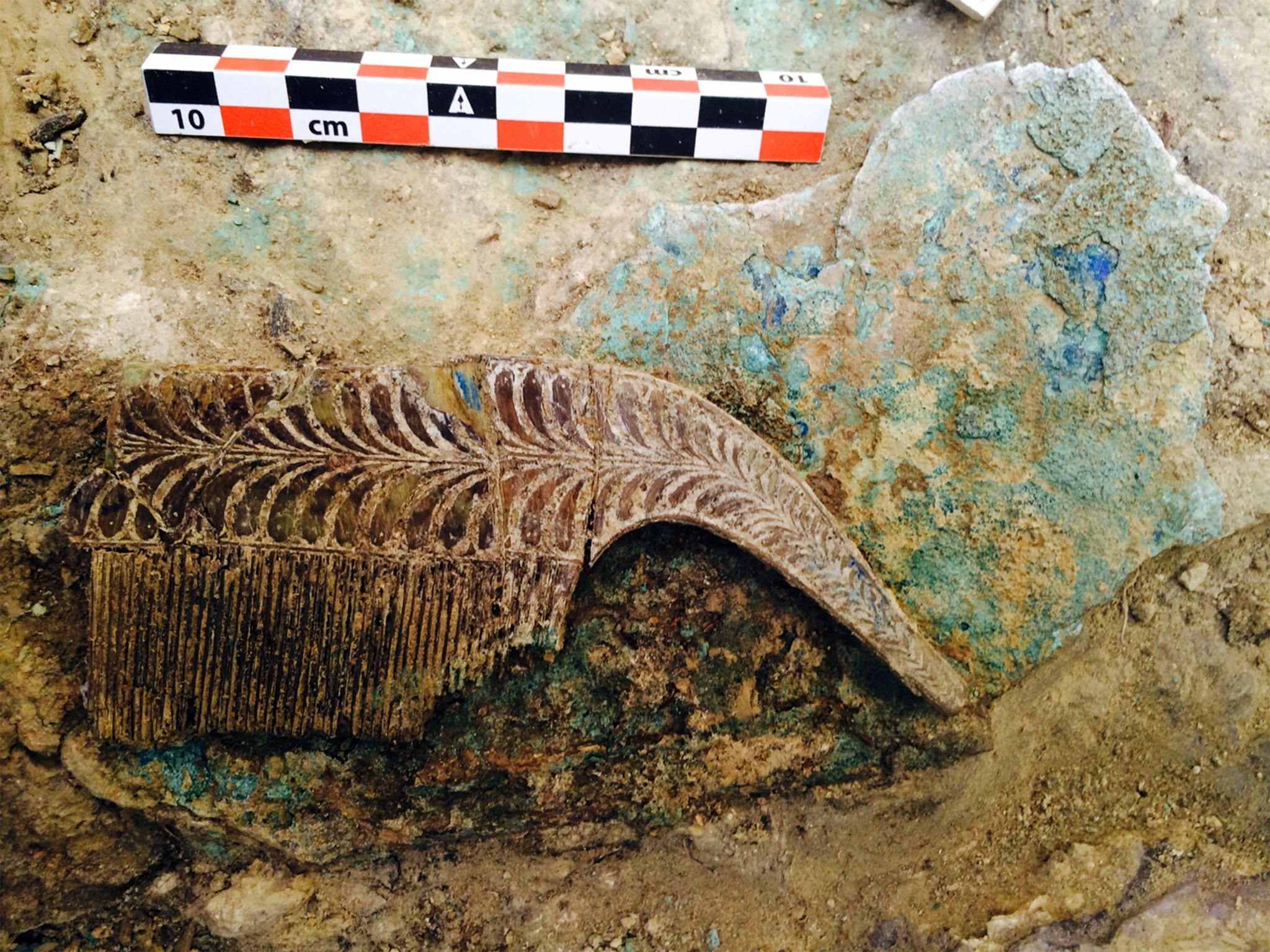 One of six ivory combs found in the warrior's tomb. (Greek Culture Ministry)

Six fine-toothed ivory combs, mostly intact and about 6 inches long, were uncovered in the grave. They were intricately decorated and accompanied by a bronze mirror with an ivory handle.

Stocker says it’s significant that the warrior was buried alone, and that jewels, combs, and a mirror accompanied him.

It was extremely rare for a person to be buried alone, Stocker says, and archaeologists uncovering group graves in the past have had trouble determining which objects are associated with which remains, male or female. “In the past, people have wondered if you could divide finds along gender lines. Did the beads go with women? Did the combs go with women and the swords with the men?” Stocker told The Times.

“Since it’s only one burial, we know that all these objects went with this man.”

A rich person’s cups, bowls and jugs – made with bronze

Most graves from this era were packed with ceramics and other stoneware, Stocker says. But piled on top of the jewels and weapons were vessels, bowls and basins made strictly of bronze, some ringed with gold and silver trim.

Some of the bronze vessels, once round, had been flattened by centuries of earth weighing down on them.

“This guy was really, really rich,” Stocker says. His bones indicate he was “strong, robust … well-fed,” she says. He may have been royalty, or even the founder of a new dynasty at the Palace of Nestor. (A conqueror may not have wanted to be buried in a communal grave with generations of the previous dynasty, Stocker says).

The man, who was 30 to 35 years old when he died, could have been a warrior who led a raiding party to the nearby island of Crete and whose loot was buried with him. Or even a trader who acquired the goods through commerce.

“We don’t know his name, and we don’t really know anything else about him,” she says.

British sites yield mummies, but no King Tuts as found in Egypt

What will become of Palmyra ruins after Islamic State killing of Syrian archaeologist?