In Ukraine, the jobless and aimless replace the revolutionaries

For all its menace and squalor, though, Independence Square in Kiev remains a place of reverence for the fallen heroes of the revolt.

For all its menace and squalor, though, Independence Square in Kiev remains a place of reverence for the fallen heroes of the revolt.

In Ukraine, the jobless and aimless replace the revolutionaries For all its menace and squalor, though, Kiev’s Independence Square remains a place of reverence for revolt’s fallen heroes.

Jackbooted young men in World War I helmets patrol the muddy sidewalk in front of the parliament building, their chapped hands wrapped around clubs and ax handles, their black-and-crimson armbands telling of allegiances to the far right.

Camouflage-clad men armed with hunting rifles control traffic a few hundred yards away, their faces hidden by black balaclavas no longer needed for warmth in the early spring thaw. The self-appointed sentries eye drivers and pedestrians funneling into a single-lane gap in the walls of bricks, firewood and sandbags that barricade Ukraine's once-elegant capital city.

At Independence Square, the baroque, monument-filled plaza known here as Maidan, the jobless and aimless have taken the place of the victorious political activists who have gone on to parliament or gone home. The stragglers sit hunched around barrel fires, dull eyes peering out from soot-stained faces, rolled-up sleeves baring the tattooed insignia of ex-cons and forgotten military veterans.

The women in floral kerchiefs who tended bubbling pots of borscht or boiling vareniki to feed those demanding a better future have mostly drifted away, leaving the holdouts to shake down workers at the handful of coffee shops and bakeries in business for "donations." Stray dogs forage for scraps among the piles of garbage around camps clustered beneath signs heralding the origins of their inhabitants: Kharkiv, Ternopol, Yalta.

Banks of portable toilets flank the grubby tent clusters, their doors torn off for makeshift shields during the deadly heat of the confrontation last month, their users in plain sight of those who now mill about the revolutionary detritus.

Yulia "Ruda" pulls the flame-red hair for which she acquired her nickname — Red — into a stretchy yellow headband identifying her as a volunteer with the Self-Defense Forces of Ukraine.

"By staying here, we are showing the true image of the self-defense forces," says the 28-year-old art director, who asked that her last name not be used for security reasons. She works for a local disco, among the businesses not yet back on their feet after the months of chaos in the country. "We are guarding against new provocations, but we are also making repairs to property damaged during the protests and bringing back public order. But it takes time." 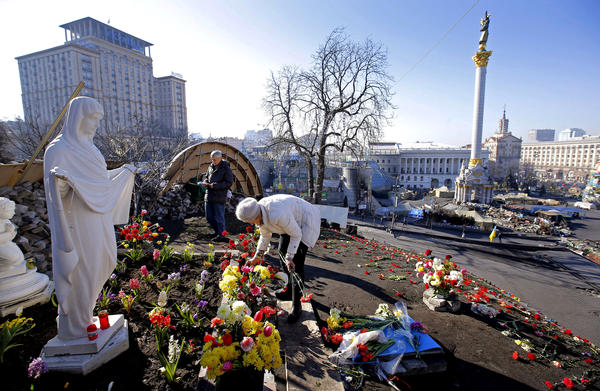 A woman tends a memorial at Independence Square in Kiev for those who gave their lives in the protest that brought down Ukrainian President Viktor Yanukovich. (Robert Ghement / European Pressphoto Agency) More photos

As she spoke, her posture erect and her hands clasped behind her back in the style of a soldier at ease, a battered flatbed truck pulled up to a smashed newspaper kiosk with panels of fresh glass, a moment of normality in this flower-festooned colony of drifters and debris.

Like all good lies, the disparaging words of Russian leaders — that the protesters who toppled Ukraine's governing order are fascists and criminals — have a grain of truth about them.

Maidan in the waning days of 2013 was filled with students, doctors, clerks and factory workers angered by President Viktor Yanukovich's decision to abandon Ukraine's path toward association with the European Union. But the protesters, confronted by waves of brutality, were eventually joined by crudely armed forces less interested in democracy than revenge.

Much like the Occupy movements that began on Wall Street in 2011, the Maidan protest became a magnet for the discontented of every ilk: nationalists, anti-communists, radical environmentalists, soccer hooligans and anarchists. Ad hoc militias took to the streets in paramilitary gear, lobbing firebombs at government strongholds and beating back at the Berkut riot police who attacked them.

Today, Yanukovich is gone, but hundreds of the self-appointed enforcers remain on guard.

At the Dnipro Hotel on the western fringe of Maidan, two masked toughs with foot-long hunting knives block the entrance to the adjacent London Pub, through which the few paying guests must enter and have their belongings ransacked. At the sole opening in a wall of debris separating the hotel from Khreshchatyk Street, a masked man advertising his views with the "Right Sector" armband vets prospective entrants, a shiny new seven-iron at the ready. Inside, in the dimly lighted corridor leading to the reception area, a camouflage-clad defender sits in the shoeshine chair, a high-powered rifle resting on his knees.

But for all its menace and squalor, Maidan remains a place of reverence.

Mounds of carnations laid out in orderly rows beneath photocopied pictures of the fallen heroes of the revolt stand 3 feet high in places. The wilting cut-flower berms flank the brick and sandbag barricades, splashing the landscape of ruin with incongruous color. Candles in tinted glass jars and faux gilded screw-tops flicker, left by survivors and revolution tourists paying their respects to those forever silenced. A member of a "self-defense" unit warms up by a stove at a barricade near Independence Square in central Kiev this month. (Dimitar Dilkoff / AFP/Getty Images) More photos

Nikolai Semenyanka, gripping a metal crutch like a staff in his huge right fist and a hand-rolled cigarette in his left, is holding court outside a tent with other veterans of the Soviet occupation of Afghanistan, a war fought for a previous Kremlin's expansionist aims.

"We didn't fight for this country to lose it to another," he says of the battle against Yanukovich and the seething conflict between Russia and Ukraine that now threatens Kiev's hold on the strategic Crimean peninsula.

Semenyanka looks a generation older than his 46 years. He fears a shooting war could erupt in Crimea, not because of any real enmity between Russians and Ukrainians but from the manipulated sentiments of "maybe 60 or 70 hotheads and adventurists" riled up by Russian President Vladimir Putin.

"Of course we are afraid of war!" Semenyanka bellows. "Putin has turned these two fraternal peoples against each other until they are on the verge of firing their guns."

We need Maidan to keep our voices in the new government’s ear.”

Russia's moves on Crimea, where its Black Sea fleet is based on territory leased from Ukraine, has diverted the international spotlight from Maidan. And the shift of battle lines from Kiev to Simferopol, Crimea's regional capital, has raised further questions about why and whether the revolutionary stragglers at Maidan are serving any useful purpose. Semenyanka insists he and his comrades are ready to defend Ukrainian territory against Russian aggression, despite injuries some suffered during the long battle in Kiev.

Dmytro Yarosh, head of the Right Sector militia-slash-political party that has given the Kremlin its most powerful ammunition in discrediting the Maidan protest, points to the situation in Crimea as justification for keeping his far-right foot soldiers on patrol.

"Ukraine is practically in a state of war with the Russian Federation, and it was not us who started this war," he says. Defending the gains of the revolution and the territory of Ukraine "is the constitutional duty, not only of the armed forces, but of every citizen of Ukraine," Yarosh says.

Others who come to the square argue that the guardians of the revolution must stay in place until Ukraine's May 25 presidential election, to keep the interim authorities honest and responsive to the demands of those whose defiance and bloodshed put them in power. 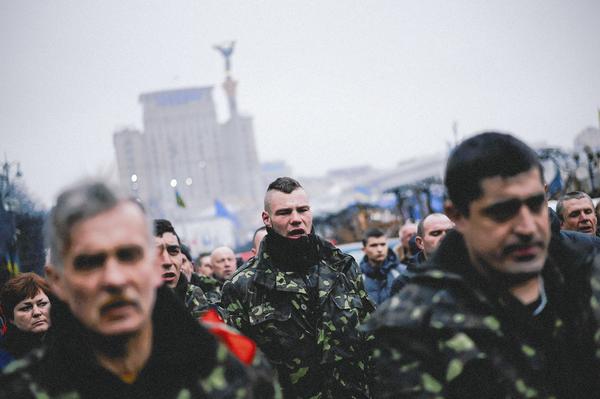 In Kiev, members of a self-defense unit last week follow the coffin of another member who was killed near Independence Square. (Dimitar Dilkoff / AFP/Getty Images) More photos

"I think we have to keep it," Viktor Shur, a 45-year-old film director, says of the mess that is Maidan. "It's not just a memorial to those who died.... We need Maidan to keep our voices in the new government's ear."

On Institutskaya Ulitsa, uphill a few hundred yards from the grubby tents and blaring sound stage, Irina Denisova fiddles with a plastic lighter, trying to put flame to the wick of a memorial candle. An oncologist with a busy schedule of appointments each workday, she didn't have a chance to pay her respects to the victims until more than two weeks after the protest drove out Yanukovich.

"We should preserve the memorials, to honor those who died," the doctor says.

"But the rest of this should return to normal," she says, with a wary glance at an encampment that resembled a Dickensian den of thieves. "The sooner our city gets back to normal, the sooner we will heal." 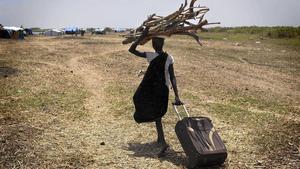 It's incredible how fast it spun out of control.” 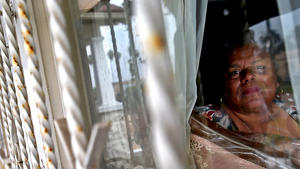 At nighttime that's how I sit here, I sit here with the lights off.” 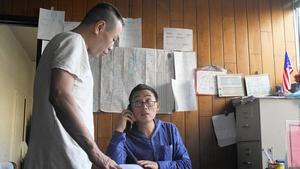 Carol J. Williams is former senior international affairs writer for the Los Angeles Times. A foreign correspondent for 25 years, she has won five Overseas Press Club awards, two Sigma Delta Chi citations and was a 1993 finalist for the Pulitzer Prize in international reporting. She has served as Times bureau chief in Budapest, Vienna, Moscow, Berlin and the Caribbean. A native of Rhode Island and irrepressible Red Sox fan, Williams speaks Russian, German, French and Spanish, and has reported from more than 80 countries. She left The Times in 2015.