The economy is brightening as 2014 arrives — but that could signal higher borrowing costs for homebuyers as the Federal Reserve scales back its efforts to lower interest rates and the chance of higher inflation increases.

Lenders were offering 30-year fixed-rate mortgages this week at an average of 4.53%, up from 4.48% last week and the highest since September, Freddie Mac said Thursday in its weekly report.

The interest rate for a 15-year fixed loan averaged 3.55%, up from 3.52% last week. The start rate for adjustable loans fixed for the first five years was 3.05% compared to 3% a week ago, Freddie Mac said.

QUIZ: How much do you know about mortgages?

Freddie Mac, the government-supported issuer of bonds backed by mortgages, asks lenders about the terms they are offering to solid borrowers with at least 20% down payments or 20% home equity for those refinancing their loans. The borrowers would have paid less than 1% of the loan amount in lender fees and discount points to obtain the rates.

“Mortgage rates edged up to begin the year on signs of a stronger economic recovery,” Freddie Mac chief economist Frank Nothaft said in a statement. An index of pending home sales turned positive in November after declining for five months, he noted, and consumer confidence rose in December. 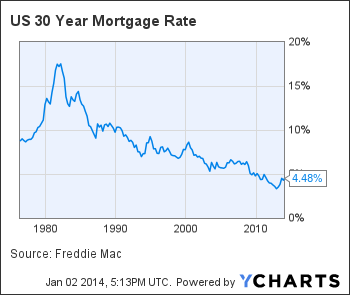