The cost of a home loan dropped early this week on less than robust news about the economy and housing, with Freddie Mac reporting that the average interest rate for a 30-year fixed mortgage was 4.28%, down from 4.37% a week earlier.

The average for a 15-year fixed mortgage was 3.32%, down from 3.39%, Freddie Mac said Thursday in its weekly survey of what lenders are offering to solid borrowers.

The average start rate for a popular type of adjustable mortgage with a fixed rate for the first five years edged down from 3.05% to 3.03%.

PHOTOS: The 10 richest people in the world

Rates rose late last year when it became clear that the Federal Reserve would scale back its enormous purchases of mortgage bonds and Treasury securities, a program designed to stimulate the economy by keeping long-term rates low.

But the 30-year fixed rate has since fallen back about a quarter of a percentage point, a decline attributable at least in part to an economic recovery too weak to raise fears that inflation could become a problem.

Freddie Mac’s chief economist, Frank Nothaft, noted that the news early this week included a downward revision in the fourth-quarter gross domestic product and a weaker than expected report on private-sector job growth.

Freddie Mac asks lenders each Monday through midday Wednesday about the terms they are offering creditworthy borrowers who pay less than 1% in upfront lender fees and discount points to obtain mortgages. Charges for services such as appraisals and title insurance are extra.

Actual rates fluctuate, sometimes more than once a day. Borrowers can pay additional points to obtain lower rates, or get zero-cost loans by accepting a higher rate. 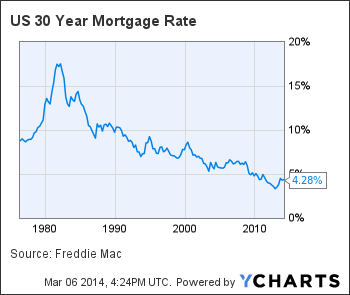